This is my review of the Virgin Atlantic Clubhouse at JFK Airport in New York.

I tried to fly Virgin Atlantic on one leg of my New York trip but availability wasn’t there on the days I needed it.  It is now far too long since I flew with them long-haul and I sometimes feel a little guilty writing about Virgin Upper Class without recent experience.

When I realised that Singapore Airlines First Class passengers get to use the Virgin Atlantic Clubhouse at JFK, I perked up.  The London Heathrow Clubhouse lounge is regarded as one of the best airline lounges in the world with a range of features rarely seen.  I still remember getting my hair cut and sitting in a soundproofed room testing out a very high-end piece of hi-fi on my last visit!

I assumed that New York, as Virgin’s ‘2nd home’, would be as good.  Sadly, I was mistaken.

There is nothing wrong with the Clubhouse at New York JFK.  By the standards of 95% of US airline lounges it is outstanding.  It just doesn’t have anything special about it.  I ended up spending over two hours there which was far too much.

Here are a few photos.  This is a general overview shot: 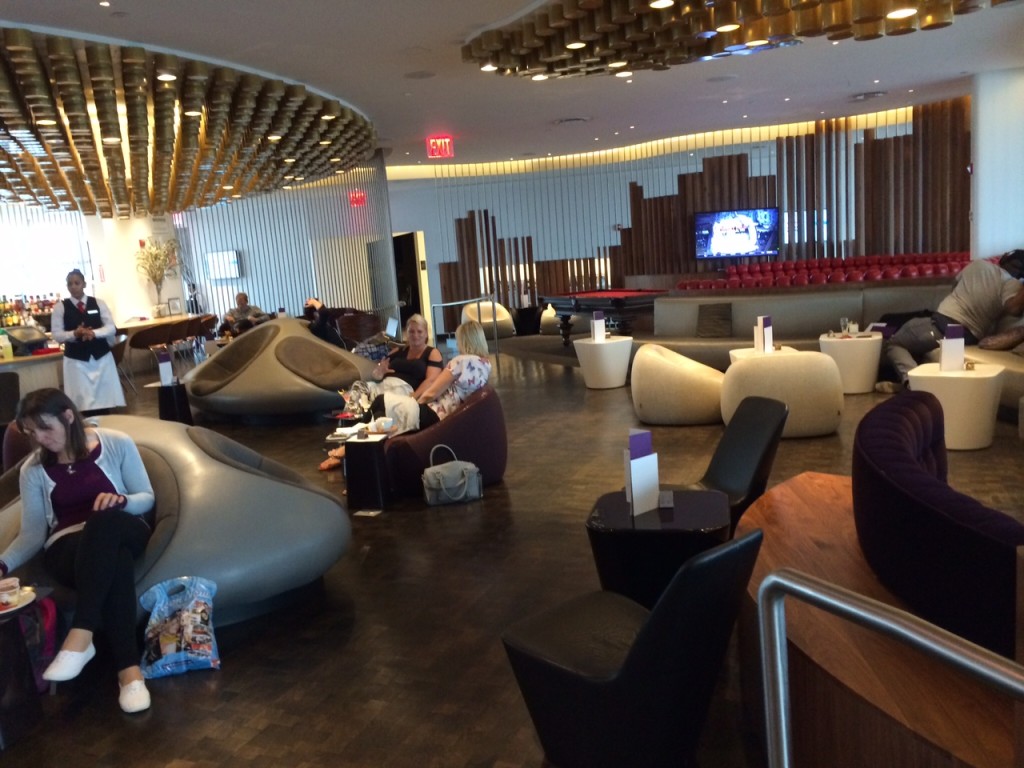 The funkiest part of it, which isn’t saying too much, is the pool table …. 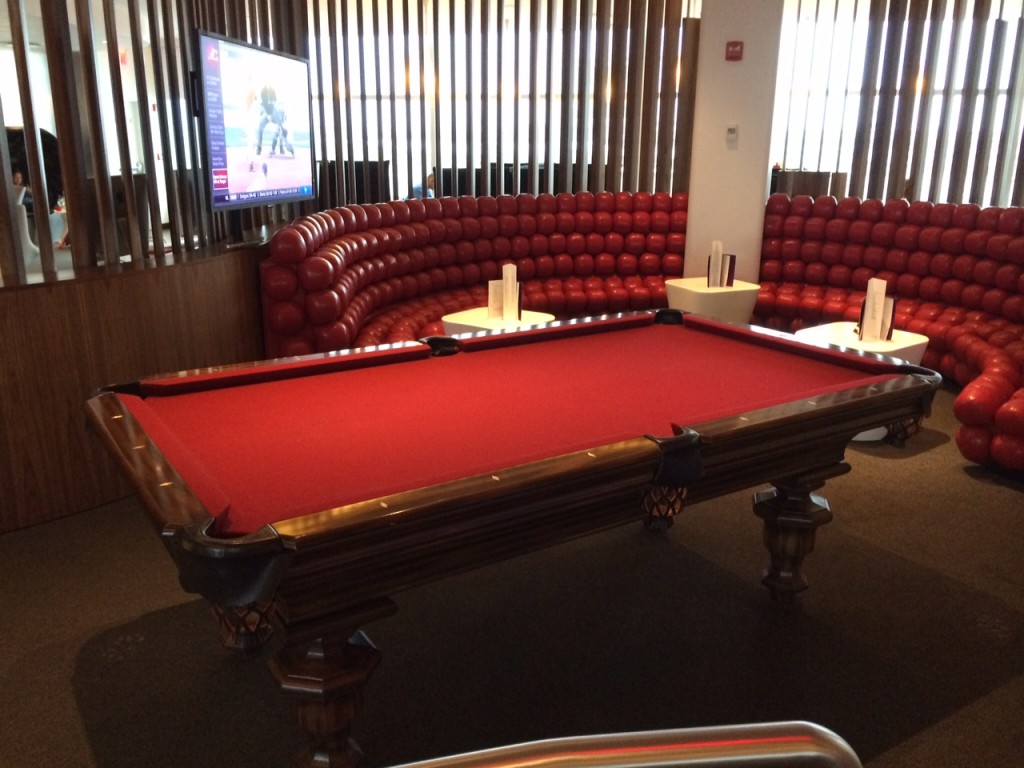 …. and these odd seating pods built into one of the corners, which aren’t really comfy or convenient …. 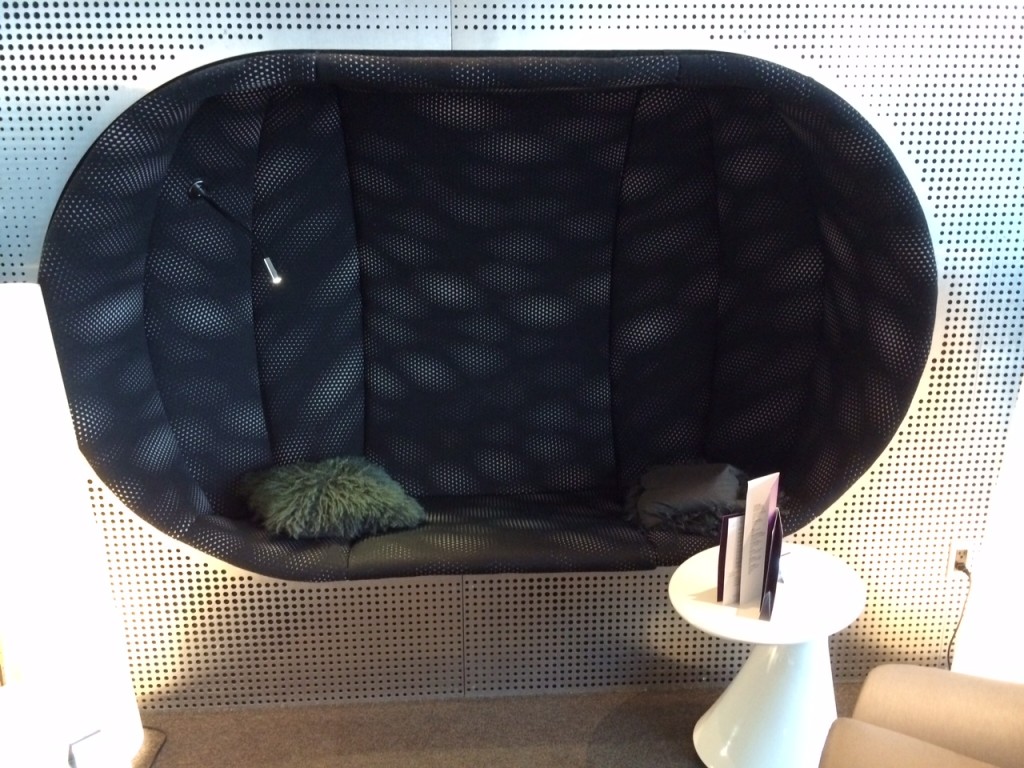 There is a tiny spa but it didn’t seem up to much.  I didn’t try to get an appointment.  I DID try to have a shower but every time I checked all three of the cubicles were locked. 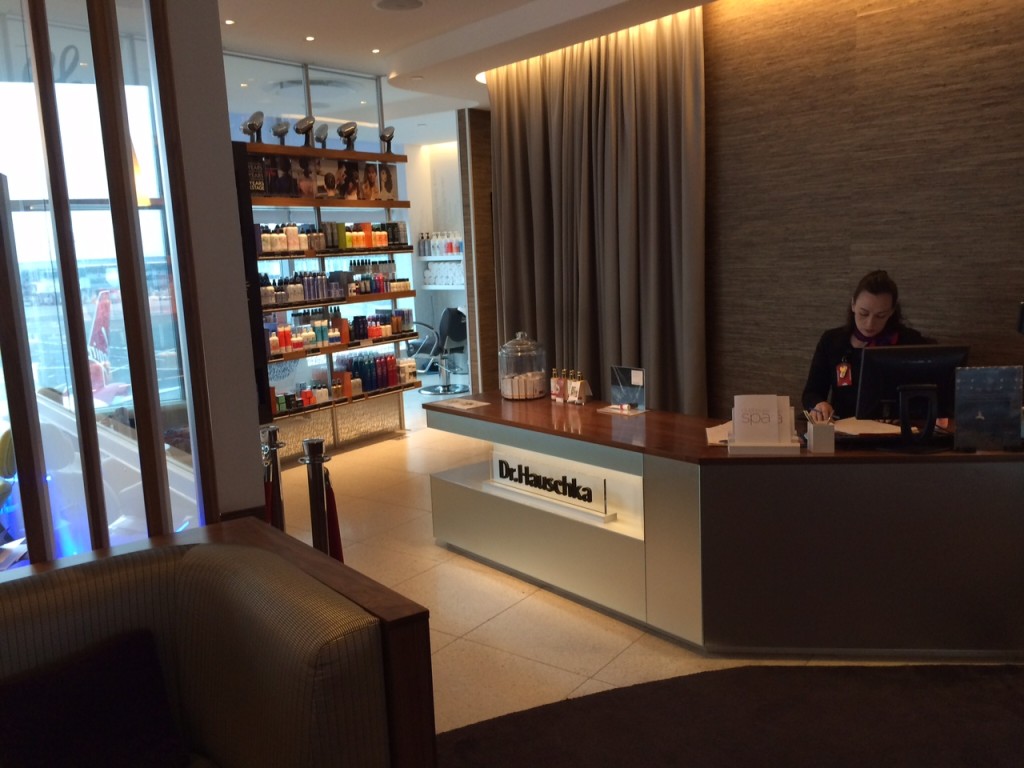 There is a decent sized dining area serving a full restaurant menu: 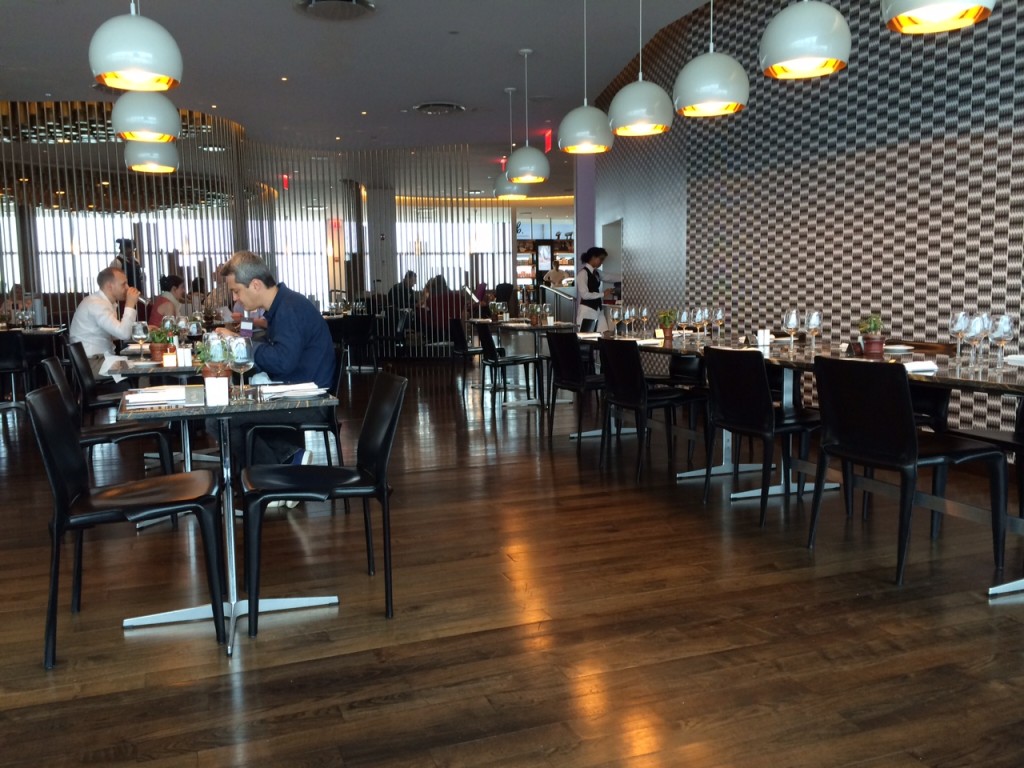 I didn’t want a full meal so I just ordered a chicken main dish.  It was acceptable but would not win any awards – there wasn’t much meat on the chicken and it was a little dry.  I would feel a bit aggrieved if I’d paid £15 for it in a London restaurant: 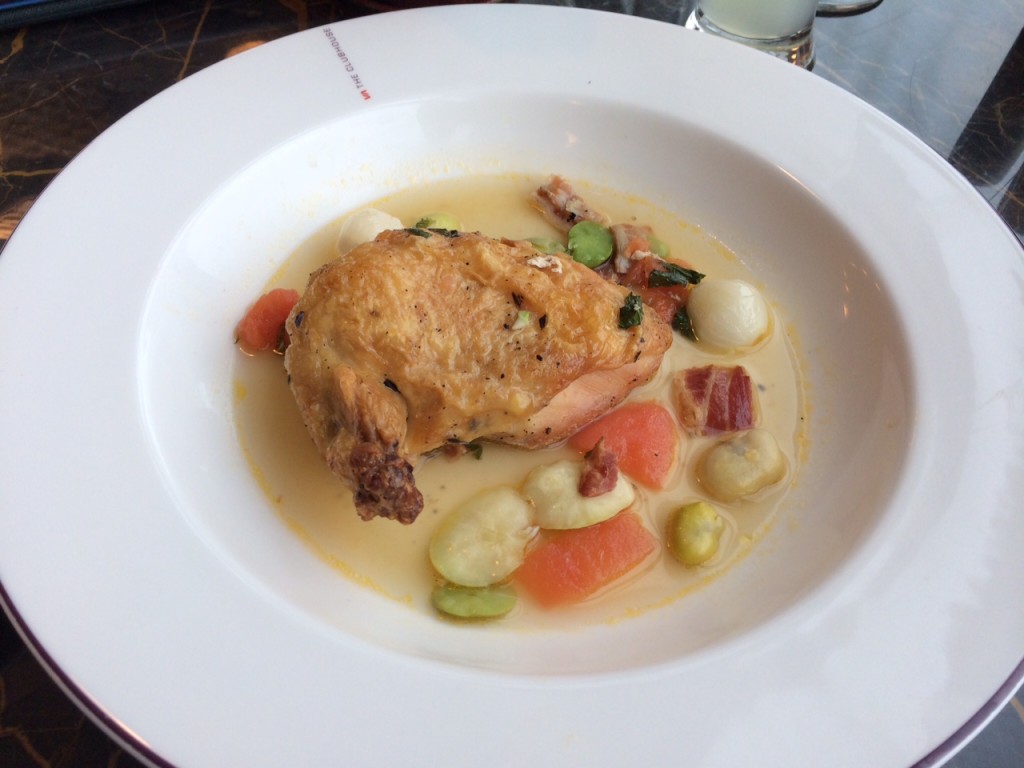 The dining area does offer a good view of departing Virgin aircraft through the windows.  There was no sign of my Singapore Airlines flight as it was on the other side of the building. 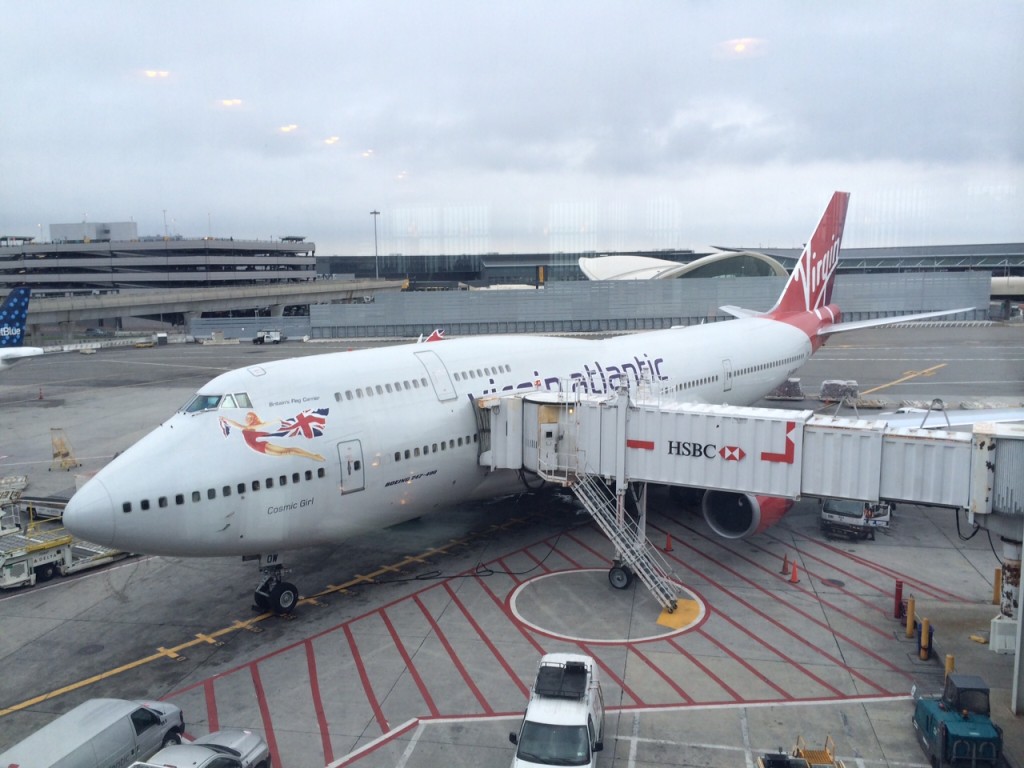 Business facilities in the lounge were limited to three PC’s, one of which was out of order.  These were on a bar with bar stools for seating which is not hugely convenient.

The most interesting thing that happened to me in the lounge is that I was paged for the first time in my life!  When I got to the reception desk, it was Singapore Airlines on the phone.  There was a family of three checking in and Singapore wanted me to swap seats (moving forward a row) so that the family could have three in a line.  As the seats are identical and I still had a window, I didn’t mind.  It did make me wonder what other airlines would have gone to such trouble to track down a passenger before moving his seat forward a row ….