Amex has launched, very quietly so far (ie they haven’t told anyone), a new promotion for Platinum cardholders.

You get free admission for you and a friend to selected exhibitions at the Royal Academy of Arts on Piccadilly.  Children under 15 are always free so you could bring your entire family without charge.

Platinum cardholders can also get access to the Keeper’s House lounge, bar and restaurant, which is usually exclusive to Friends of the Royal Academy before 4pm.  This is an interesting space which only opened last year and which includes a tiny hidden garden.  It is open seven days a week.

The promotion runs until the end of the year and will cover the following three exhibitions: 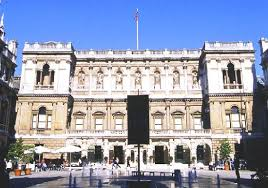 From the Civil Rights movement to the streets of Harlem, Hopper’s photography powerfully captures American culture and life in the 1960s, a decade of progress, violence and enormous upheaval.

From radical innovations in the use of colour and form to new materials like neon and interactive, kinetic sculpture, this exhibition will reveal some of the most original art of the last 100 years.

Note that Dennis Hopper is in the Burlington Gardens annexe which is ’round the back’ and cannot be reached from the Piccadilly entrance.

The deal also has two other benefits – as you aren’t paying, it doesn’t matter if you don’t like the show so you can take a punt on something that might not normally interest you.  You can also pop in for a brief visit if time is short without worrying about getting value for money for a full price ticket.

Full details are on the Platinum website under ‘Platinum Lifestyle’ and ‘Offers / Events’.