This is my review of the Corinthia hotel in London, together with some photographs from my visit.

As you can imagine, I get quite a few requests from PR agencies asking me if I want to have a tour of this or that hotel or join a press trip to somewhere obscure.  With very few exceptions (The Langham London, Conrad St James and the Qatar Airways Doha visits last year), I say ‘no’ because I don’t think it is a great use of my time or your reading time.

When the Corinthia hotel in London offered me a ‘show around’ so that I could review the property, however, I couldn’t resist.

The Corinthia is probably the most opulent London hotel to open in the last 20 years.  It is certainly the most opulent new build or office conversion.  Despite this, the property has a surprisingly low profile – I had never been through the doors since it opened in 2011 and I wasn’t even 100% certain where it was.

It sits on Whitehall Place, on the corner with Northumberland Avenue, between Trafalgar Square and the River Thames.  The main entrance is about 30 seconds walk from Embankment tube station if you turn left under the railway tracks. 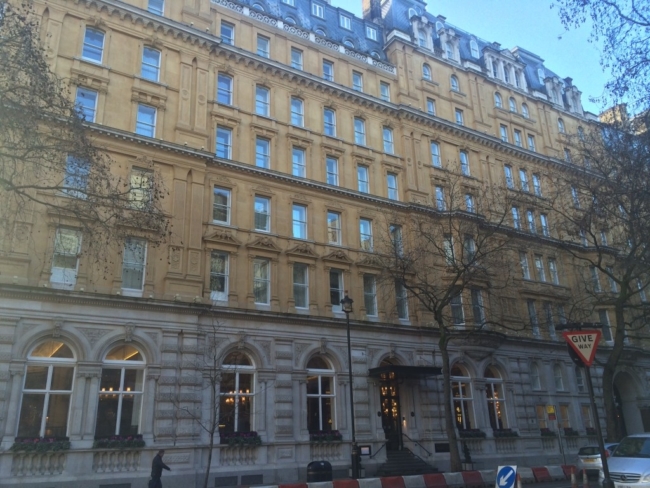 The building was originally The Metropole hotel which opened in 1885.  Requisitioned by the Government during World War 1 for office space, it had a further spell as a hotel afterwards until the Government again requisitioned it in the mid 1930’s.  It remained Government offices until the site was sold in 2007 with the hotel opening four years later after a £135m redevelopment.

The good news is that the money was spent on the public areas and bedrooms, partly designed by David Collins before he died.  Unlike many new hotels, the Corinthia has vast amounts of public space with two restaurants, a large lobby lounge which also serves food and two bars.

Here is the lobby lounge with an impressive chandelier: 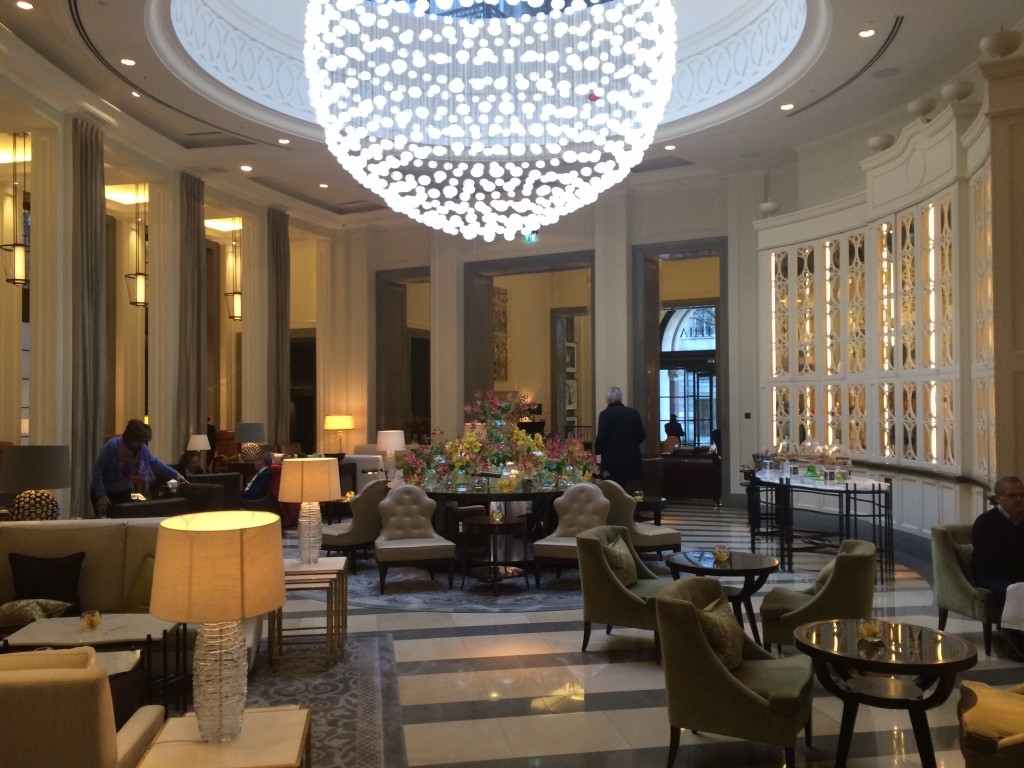 The Northall restaurant is focussed on British cuisine: 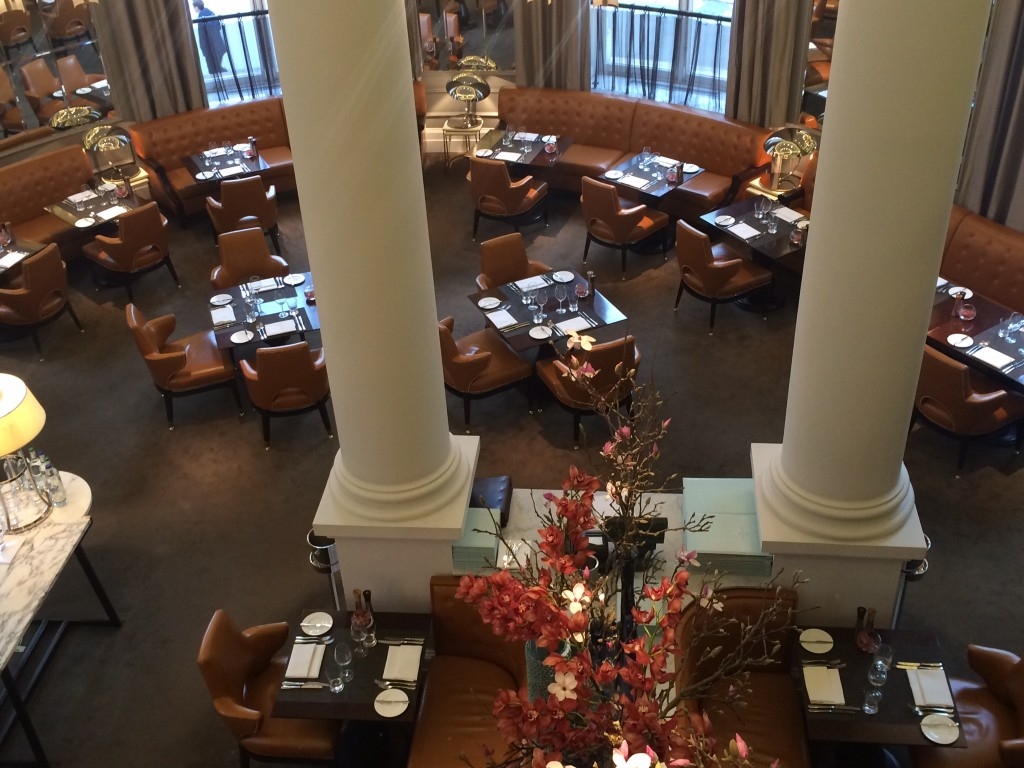 …. whilst Massimo is Italian focussed – it also a private dining room with its own open plan cooking area so you can watch the chef preparing your meal: 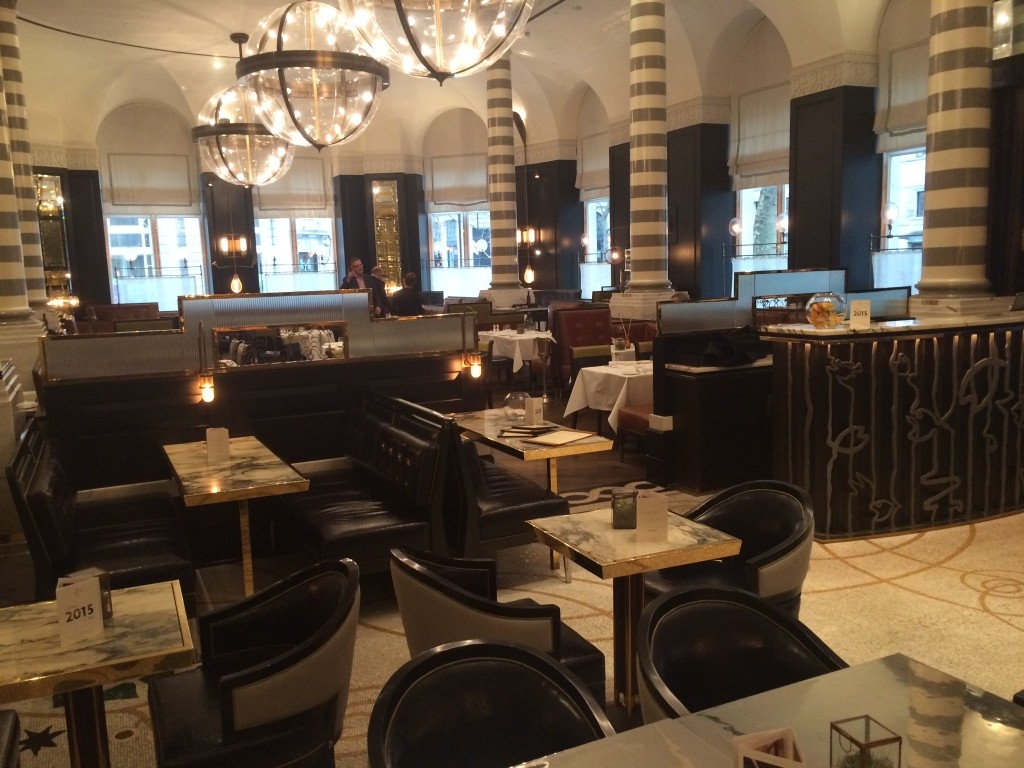 The photographs in my review do not do full justice to the level of finish in the furnishings and fittings which is very high.  The hotel website has the usual glossy professional images on it.

The hotel even has a florist and, bizarrely, the only branch of Harrods outside an airport: 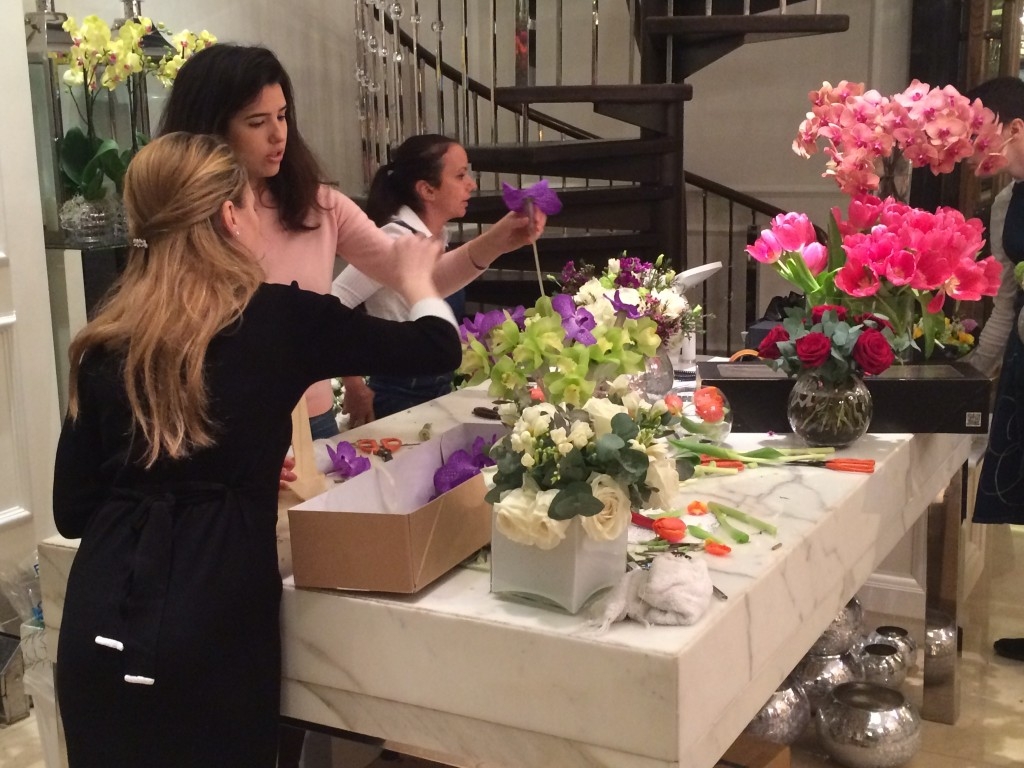 I asked to review a typical entry level bedroom which the standard guest would receive.  They are well sized (the one I visited had a separate dressing area as well as a good sized bathroom) and very well furnished: 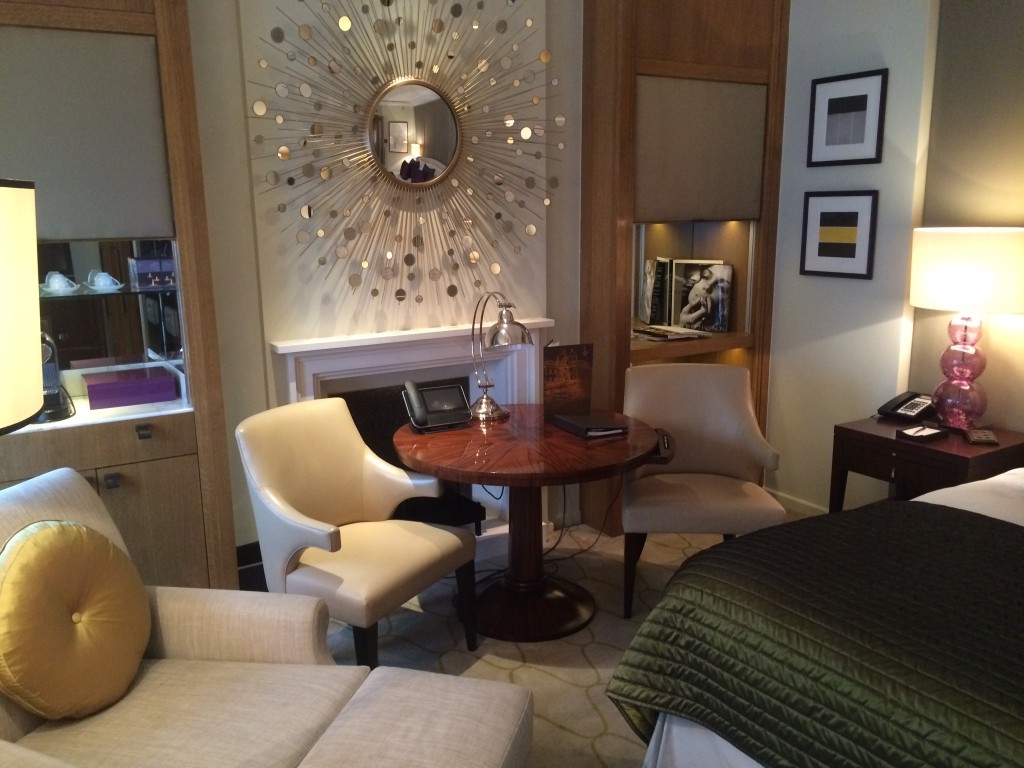 …. albeit perhaps over-cushioned on the beds: 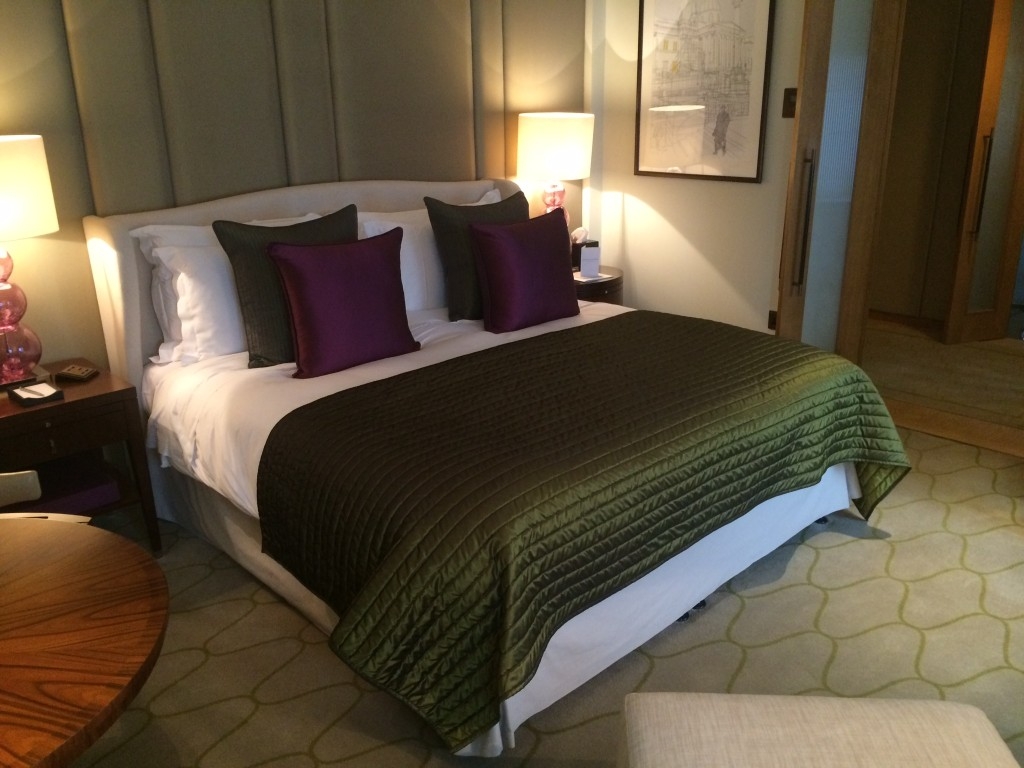 There is no executive lounge but there is a small business centre.  This is on the same level as the impressive spa, run by Espa: 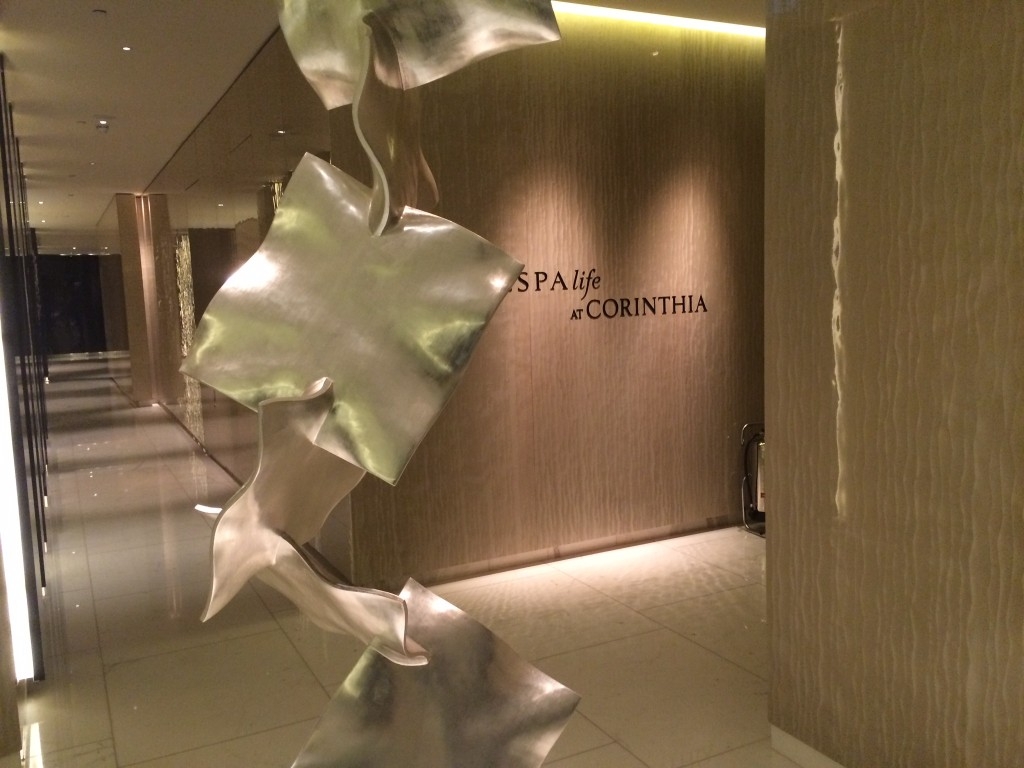 There is a small pool which I didn’t see as it would have meant walking through the spa fully clothed and waving a camera around, much to the chagrin of the users!  Here is a library photo though: 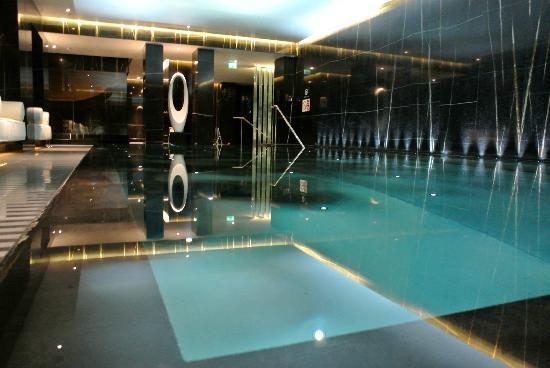 I hope this reviews conveys how impressed I was by what I saw at Corinthia.  Whilst I haven’t eaten there or spent the night, it would be fair to discuss it in the same breath as the Four Seasons, Rosewood or (when it re-opens) The Lanesborough.

It doesn’t come cheap, of course, but there is a 3-for-2 sale on at present which is good for bookings until the end of August.  There is no loyalty scheme or airline miles opportunity at present – although it is available on Kaligo.com which would earn Avios.

Corinthia also has a very well regarded hotel in Budapest if you are planning a trip there which looks like a major improvement on the Communist-era architectural disasters which dominate the upmarket hotel scene.  You can also find them in St Petersburg, Malta (x 2), Lisbon, Prague and, for the more adventurous, Tripoli and Khartoum.  Their current sale is open for bookings until the end of March.

The hotel home page is here if you want to check prices or book.