In December I told you that Hilton had been dropping hints that ‘Lifetime Diamond’ status would soon be available.  Hyatt, Marriott and Starwood already have lifetime status schemes of their own so it was not surprising that Hilton chose to follow.

The scheme has now been launched.  Let’s see how it compares with the competition. 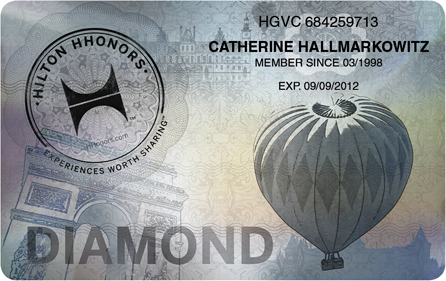 Hilton HHonors Lifetime Diamond status will not be for feint hearted!

To earn it, you will need to achieve:

There is no easy way of telling from the Hilton website how many lifetime nights you have earned.  People are being contacted in batches, it seems, so if you have not received an email yet then it still might turn up.

Let’s compare this to what is on offer elsewhere:

Marriott Rewards offers lifetime status across all three elite levels of its programme. It openly publishes the requirements online:

Starwood Preferred Guest is the only scheme to reward a long period of ‘middling’ (for want of a better word) loyalty.  The Starwood Lifetime Gold offer is better than the Marriott Lifetime Silver target, because even if you hit the Marriott nights target you are still likely to fall short on points unless your stays are generally high value ones.

Doing a line by line comparison:

Hyatt – Hilton Lifetime Diamond is easier to achieve than Hyatt Lifetime Diamond, where you need to have spent $200,000.  Your 1,000 Hilton nights probably cost less than this and there are substantially more Hilton properties around.

Marriott – on the face of it, Marriott Lifetime Platinum is easier to achieve because you only need 750 nights.  However, the requirement to ALSO earn 2 million Marriott points means that most people would need more nights than that as total base spend of $133,000 is needed.  I would say that the two targets are about equal in reality.

Starwood – 500 nights for Lifetime Platinum and 10 years of top-tier membership is clearly a far lower target than Hilton Lifetime Diamond.  The only issue is the far smaller Starwood footprint which might make staying those 500 nights tough.

As I wrote in December, lifetime status with airline or hotel chains has never appealed to me. I would be happy to accept it as a by-product of stays I was doing anyway but would not chase it. Ask the former ‘Lifetime Gold’ members of bmi Diamond Club if it was worth spending money chasing that status, which BA promptly scrapped after the takeover.

It can even create perverse incentives. I have a friend who is close to Lifetime Gold status with British Airways – it is explained here at ba.com if you want to know more about it. As soon as he reaches it he intends to abandon BA on long-haul for what he considers ‘better’ airlines. If Lifetime Gold did not exist he would definitely continue to put 1,500 tier points a year in BA’s direction in order to retain Galleries First access on short-haul.