Etihad Guest surprised me yesterday by announcing a devaluation, due to kick in from July 8th.

Given their aggressive behaviour in recent months in offering transfer bonuses, route bonuses and credit card sign-up bonuses, you might be forgiven for thinking that you had been sold a pup.

At least British Airways didn’t have a single Tesco or American Express transfer bonus in the 18 months before the Avios devaluation.  No-one could argue that they had been persuaded to convert under false pretences.

Here is a summary of what Etihad is proposing:

Reduction of miles earned in cheaper fare classes, offset by higher miles earning on more expensive tickets.  This will only apply to new bookings made after July 8th.  The new rates are: 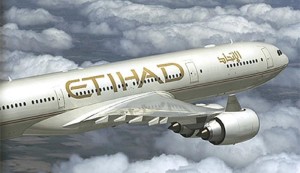 Number of reward seats in business class increasing by 20%.  I don’t understand this – Etihad traditionally releases two seats per flight in business.  Will there now be 2.4 seats?!  If the airline had any commercial nous, they would start releasing four seats per flight.  At the moment, Etihad Guest miles are very unattractive to high-end travellers with family as it is impossible to redeem in business class unless the family is split up.

Redemptions are being repriced:

Economy redemptions do not change in price and will fall for flights over 6,000 miles.  A minimum of five economy seats will be released on every flight.

Business Class redemptions will increase in price except for flights over 6,000 miles where they will remain the same.  The scale of these increases is SUBSTANTIAL – London to Abu Dhabi increases by 50%.

First Class redemptions will increase to all destinations.  It is difficult to argue about the logic here.  The difference between Business Class (44,000 miles) and First Class (55,000 miles) one-way to Abu Dhabi was too small.  However, a 59% INCREASE between London and Abu Dhabi is huge.

I have summarised the new rates between London and Abu Dhabi below.

Existing redemptions can be changed at will without triggering any price increase.

Upgrades will become more expensive and the cheapest tickets (T, E, Z) will not be upgradeable.  At present, only ‘T’ fares cannot be upgraded.

This is the best one though …. at a time of collapsing oil prices, Etihad Guest is INTRODUCING a fuel surcharge / carrier surcharge:

Note that these are ‘per flight’ – a business class redemption to Bangkok from London via Abu Dhabi is four flights so the surcharge will be $400.

What is impact of this on a typical redemption?

These are the new prices for redemption (return) between London and Abu Dhabi:

If you want to check the pricing on other routes, the online Mileage Calculator is here.

These are big increases.  There is no disguising it.  An increase of 50% in the miles required for a business class redemption – plus introducing a surcharge – is having a laugh.  The Avios devaluation only resulted in a 25% increase in Club World pricing if you flew off-peak.

Of course, you should look at these numbers in the context of Avios.  Given a choice between using 120,000 Avios + £550 of charges to fly Club World to Abu Dhabi or Dubai, versus 132,000 Etihad Guest miles + around £350 of charges to fly the A380 Business Class Studio it is still no contest.  Etihad Guest also gives you free chauffeur transfers at both ends as well.

Emirates Skywards now tops both of these schemes.  You will only need 90,000 miles plus around £600 of charges for a ‘Saver’ level business class return to Dubai.  If you pay the higher level of 125,000 miles you can effectively have any seat on any plane.

That said, if it turns out that I will be able to book four Etihad Guest seats in Business Class to get my family on holiday, I may even begrudgingly accept the changes.  At present, Etihad Guest is a fantastic scheme but not one I can use except for occasional solo trips.

If you don’t like the sound of these changes, I recommend that you book before July 8th if you are looking for a Business or First Class seat.

Further details can be found on the Etihad website here.

Remember that you can also redeem American Airlines miles for travel on Etihad – at least for now.  I would not put money on that deal still being in place in 12 months.  Redemptions via AA will cost substantially fewer miles (London to Abu Dhabi will be 60,000 AA miles in Business Class vs 132,000 Etihad Guest miles) and should not incur any carrier surcharges.