This article is my review of the First Class Apartment on the Etihad A380, flying from London Heathrow to Abu Dhabi.  This is a totally different product to the standard First Class Suite on the Etihad Boeing 777 aircraft which I reviewed earlier in the year.

This was part of my recent Middle East trip, which started with a visit to the Plaza Premium Lounge in Terminal 4 and a (not reviewed) revisit to the Etihad lounge.

Etihad has a special part of its website devoted to the A380 First Class Apartment.

When you enter the plane and turn left, this is what you see.  First Class is situated in the nose on the top deck. 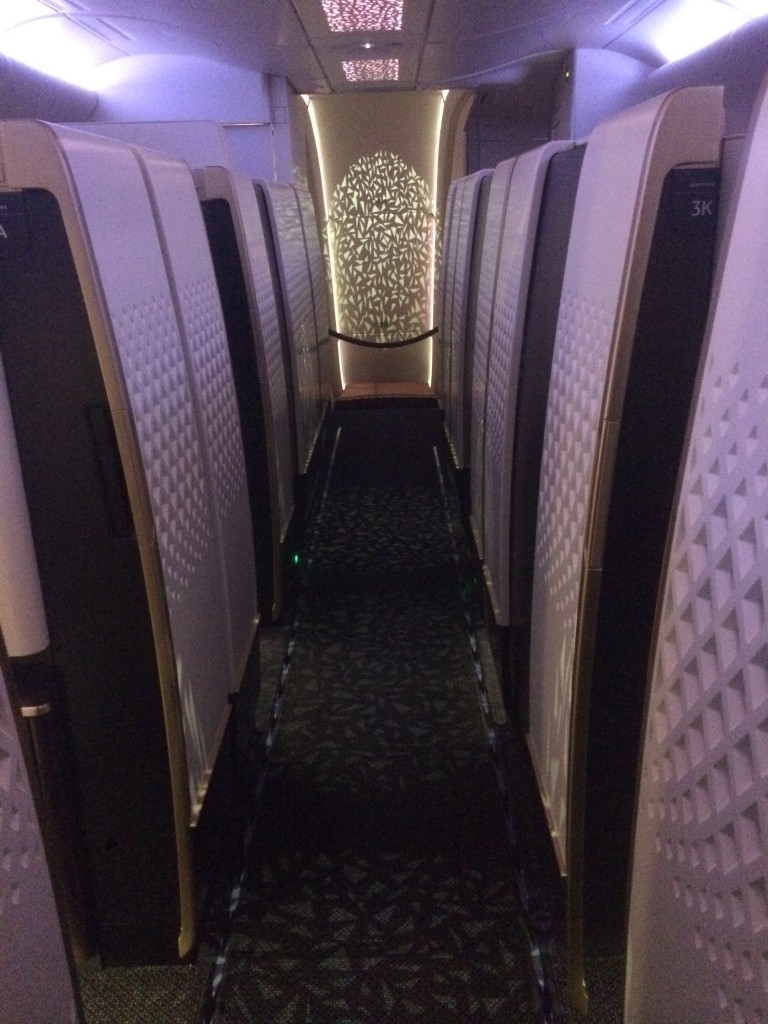 You need to remember that this is a one-aisle cabin.  On an A380.  Which is a very wide plane.

There are nine First Class Apartments, four on the left and five on the right.  The ‘Residence’, the small private apartment, is at the front on the left.  There are two toilets, one of which includes a shower, on the right.

The genius of The Residence is that it uses dead space – it occupies the area of one First Class Apartment plus the space where Emirates and most other airlines have additional toilets.  Whilst Etihad admits that it only sells it occasionally, it isn’t costing them any revenue when it is empty and the PR ‘halo’ is of course fantastic.  You can see my photos from a mock-up of The Residence in this article. 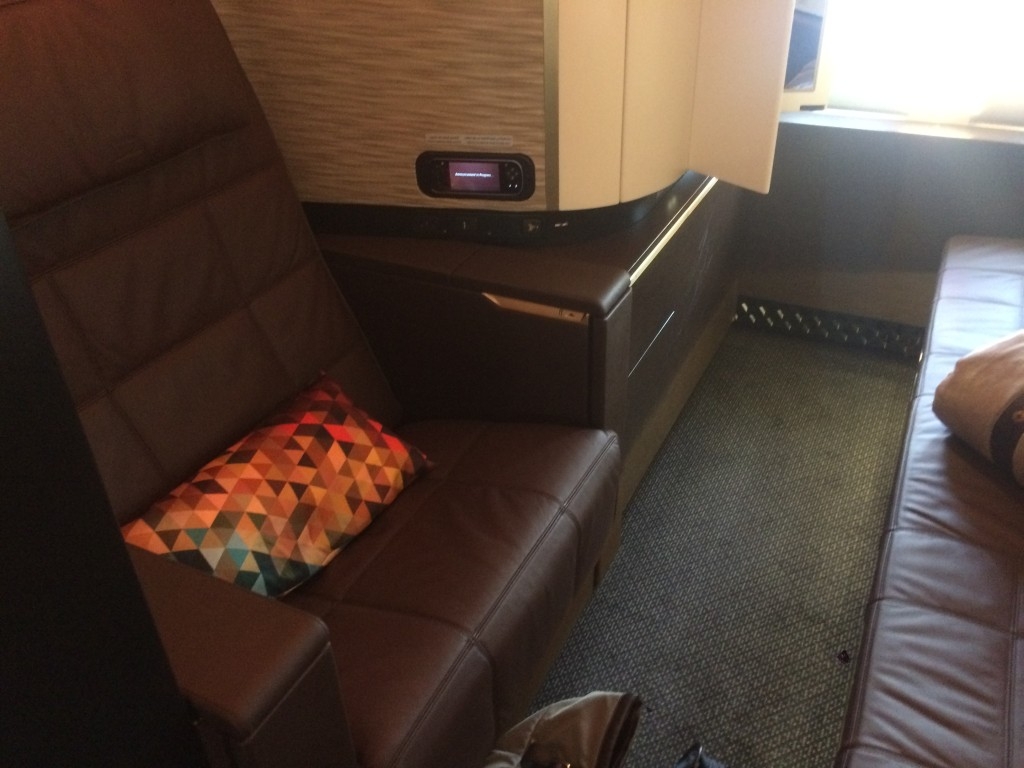 When I walked into the suite, I genuinely went ‘wow’ in my head (the words may even have have popped out!).   In terms of, well, ‘wow factor’ this is is.  There is no other First Class product that comes close, the nearest is probably the the Singapore Airlines First Class Suite which I reviewed here. 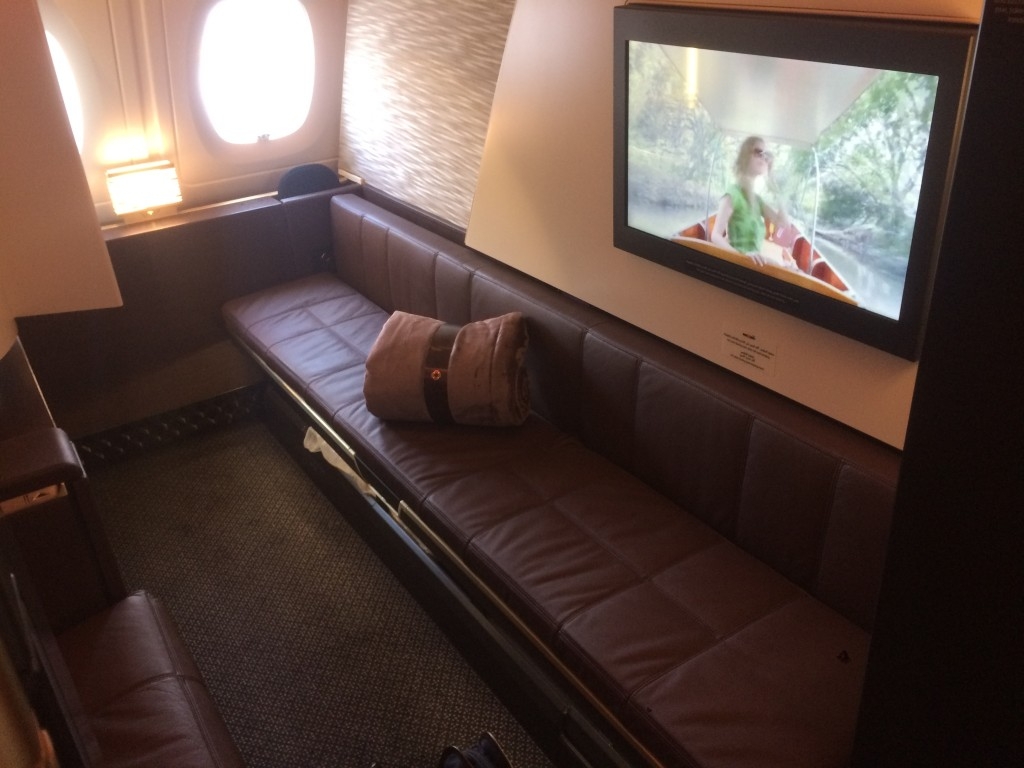 We are talking about a suite which could easily seat six people.  Easily.  OK, it would be a bit like sitting on the back row of the bus, but you get the point!

Before you get any ideas, maximum legal occupancy is three because there are only three seatbelts.  Etihad does not allow guests from other cabins to visit.

It even had its own make-up mirror: 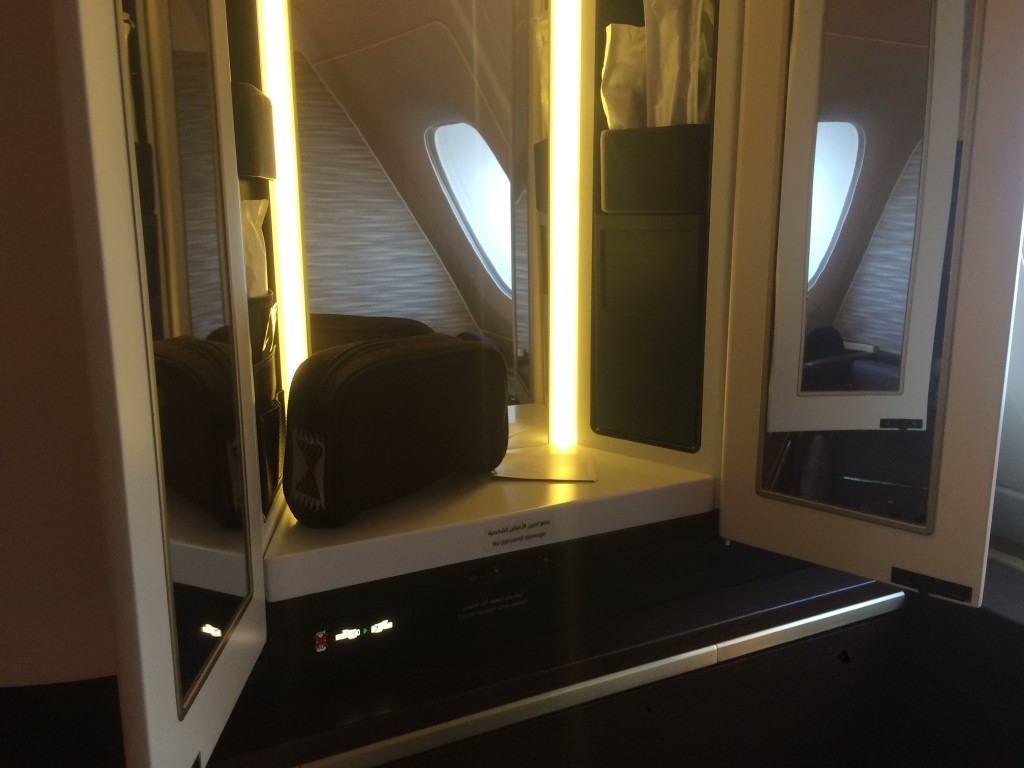 The washbag you see in that photo is empty.  Interestingly, Etihad has decided not to win you over with luxury branded toiletries – Qatar, as you will see in a few days, gave me a bag of Armani products whilst Singapore Airlines has a deal with Ferragamo.

You can just see in the picture that there are some small-brand toiletry items in the sides of the mirror – you are meant to fill your bag with any that you want.  I ended up leaving the bag behind and just taking a toothbrush and toothpaste.  I was also given a sleep suit, even though it was a day flight, which I used as pyjamas in the hotel!

The only other facility inside the Apartment, apart from the large TV, is a small soft mini-bar: 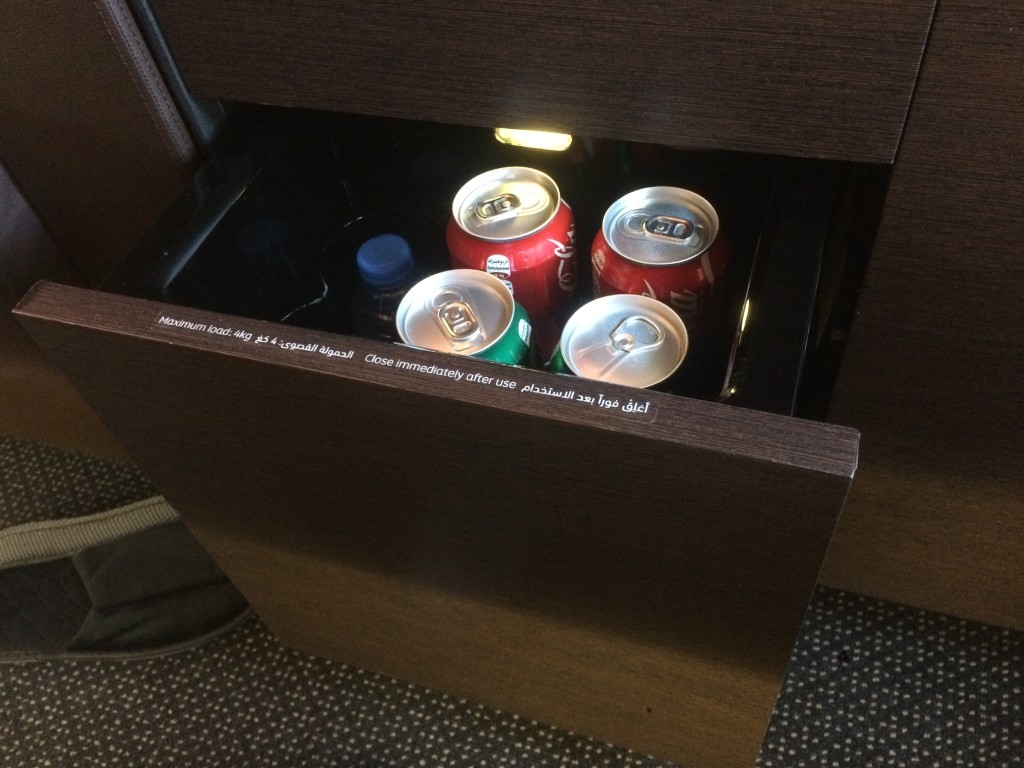 The names of the senior crew members were shown on the TV which I thought was a nice touch: 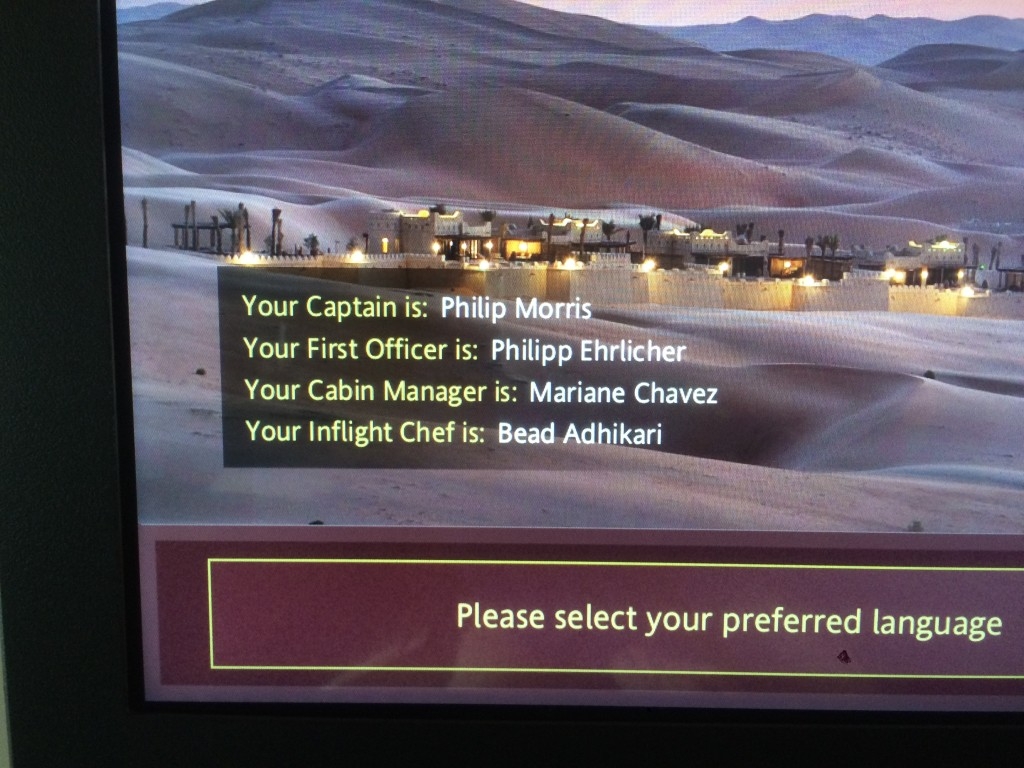 Obviously this is a stunning space to have to yourself for seven hours and only a curmudgeon would find something to complain about.  So I will, just to prove that nothing is ever ‘perfect’.

The base of the seat slopes backwards.  You can see this clearly in the 2nd photograph.  This had unfortunate repercussions – when I sat down, all of my coins and my house key shot out of my trouser pocket and slid down a gap between the back of the seat and the cushion.  There is no access to this area for the crew.  We thought that I would have to wait in Abu Dhabi for a maintenance team to take the seat apart but we managed to reach through the mechanical parts of the seat and find the key.  The money had rolled away but losing the key would have been a nightmare.

Because of the gap between the seat and the sofa / bed, it is difficult to get comfy.  Putting your feet on the sofa / bed is tricky because it is a long way away!

The apartments have different layouts to maximise use of space.  In mine, as you can see in the picture, I had no view of the window when seated.  I was facing forwards.  The row behind me faced backwards but the seat was next to the window.  The row behind that had both a seat by the window and faced forward.  I moved to that row after take off.

The light level is very, very low indeed.  With a 2pm departure, it was dark outside within an hour of take-off.  To all intents and purposes, this is a night flight in Winter!  Even with the very few apartment lights all turned on, I was struggling to read.  On long haul flights, reading is what I tend to do.  As usual, I ignored the onboard wi-fi and I ignored the in-flight entertainment and worked my way through a week or so of books and magazines that had built up at home.

If you want to sleep, the sofa turns into a separate bed.  The reason this is a different colour to the photos above is that I had changed seats by this point due to the lack of light in my original apartment: 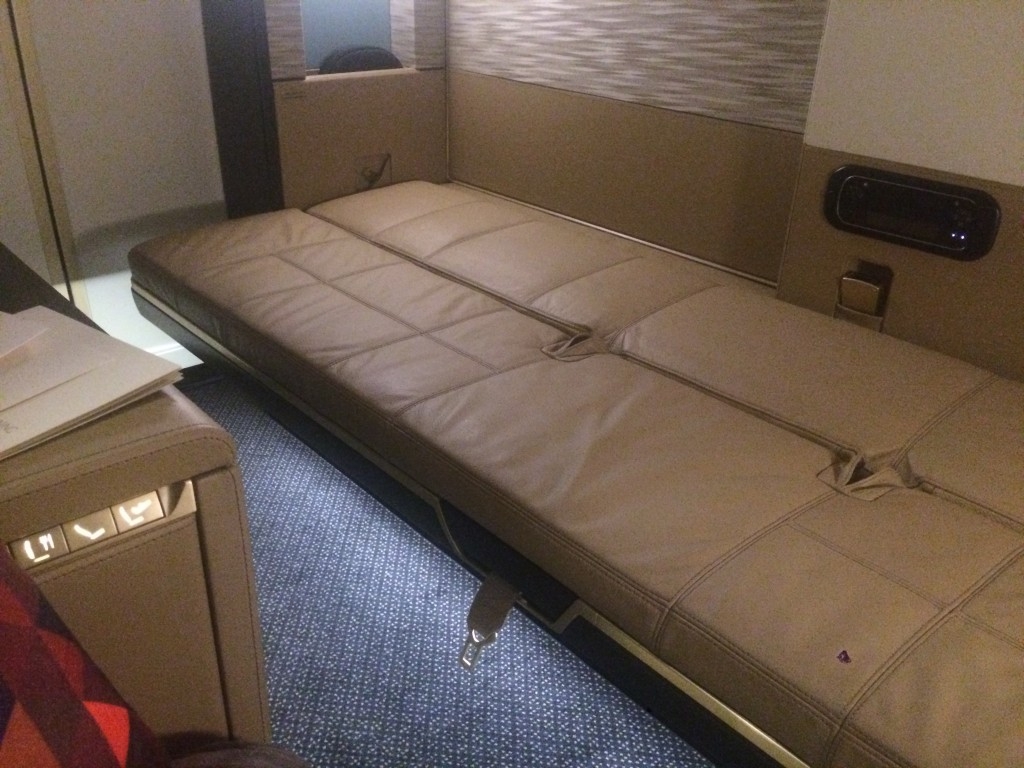 Don’t take my complaints above too seriously.  This is a stunning space – I felt a bit sad that I was on my own, to be honest.  It is almost embarrassing to compare it to the standard British Airways First Class seat.

Since the Etihad devaluation, this has become a more expensive miles redemption via Etihad Guest.  When I booked it was 55,000 miles one-way from London to Abu Dhabi, which included chauffeur transfers at each end.  It will now cost you almost 88,000 miles each way plus the new fuel surcharge.  This is still astounding value compared to using 80,000 Avios for British Airways First Class one way, with no chauffeur service.

A better deal, as long as you book before the March 2016 devaluation, is using American Airlines miles.  You only need 40,000 AA miles to book the First Class Apartment from London to Abu Dhabi one way.  You don’t even pay the fuel surcharge when using AA miles and availability is identical to booking via Etihad Guest. You could buy the AA miles you need for a modest sum via their current promotion.

Click here for Part 2 of my review of the Etihad A380 First Class Apartment with a look at the food and drink on board.