This is Part 2 of my review of Etihad’s A380 First Class Apartment.

Yesterday I began my report on my recent trip to Abu Dhabi to review the First Class Apartment on Etihad’s A380 fleet.  Click that link to see Part 1 which focussed on the seat and cabin.

Today I want to take a look at the food.

(There may be a cultural aspect at work here, of course, as those airlines serve a geographically narrow customer base.  A Lufthansa flight to the US will be primarily full of US or German citizens which makes it easier to cater.  An Etihad flight to or from the UK will have a far broader spread of nationalities.) 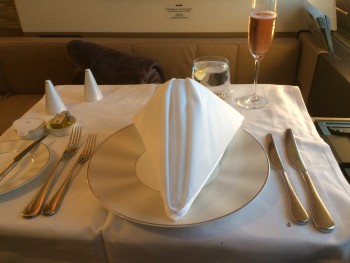 The wine selection continued to be ‘cheap’.  The Nautilus Sauvignon Blanc I had turns out be just £9.99 a bottle at Majestic Wine at the moment!  A typical red, the Line 39 Pinot Noir (2013) is even cheaper!  The presence of Heineken on the beer list does not fill you with confidence either although they did at least splash out for Johnnie Walker Blue Label whisky.

The food in Etihad First Class

Etihad has dedicated in-flight chefs for First Class.  The idea is that, if the main courses on the menu do not appeal (which is likely) he will ‘knock something up’ from a list of ingredients carried on board.

Following an amuse bouche of something I didn’t catch the name of ….. 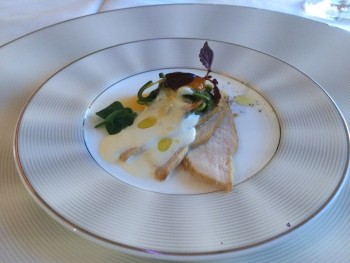 …. the appetisers consisted of:

marinated prawns, quinoa and wakame salad and red pepper sauce (which I had, see photo, and which worked well as the pepper offset the tastebud-dampening impact of flight) 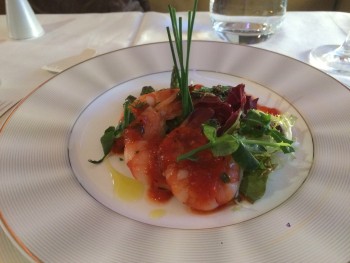 Next came that old favourite, the ‘palette cleansing sorbet’: 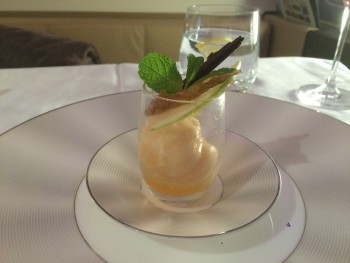 The three mains did not appeal:

As I did in February, I sat down with the chef (Bead in this case) and we looked at his list.  He had beef tenderloin, rib-eye steak, lamb shank, chicken supreme, fish, beans, mixed vegetables, mashed potato, chateau potatoes, french fries, steamed rice and a variety of sauces to work with.

We ended up with the fish on a bed of mash (see below) which, whilst admittedly not ambitious, was actually just what I wanted.  Remember that I had a two-course table-served meal in the Etihad lounge just two hours earlier! 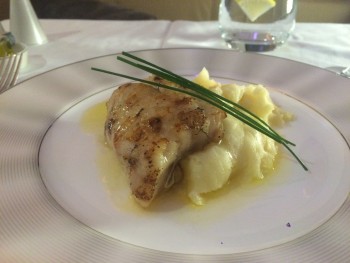 For dessert, the choices were:

dessert taster (three mini desserts – berry and cinnamon frangipane, apricot cheesecake with passion fruit meringue, chocolate mousse – which is what I took, see below.  Reading the list again, I fancy the crepe to be honest!) 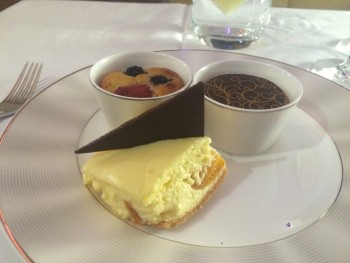 What you can see from the photos here is the huge investment that Etihad has made in presentation, crockery etc.  This is not expensive in the broad scheme of things but really makes an impact.

Overall, the food and drink hit the spot, although there is clearly some room for improvement.  If you want caviar and the trimmings then you are on the wrong airline, unfortunately, although I accept that these sort of items carry less appeal for passengers who fly in First on a very regular basis.  I’d also like to see some more investment in the wine list – there is no real excuse for that!

Details of how I used miles for my ticket and how you could do the same are in Part 1 of this Etihad A380 First Class review which you can read here.