In general, when I write about IHG Rewards Club (the Holiday Inn, Crowne Plaza, InterContinental scheme), I say that I value their points at 0.5p.

This is based on my tendency to redeem 50,000 points for five-star hotels which would otherwise cost £250 per night.  The maths also often works at lower price levels if you tend to redeem at mid-market properties.

There was always a problem with this 0.5p valuation.  It has always been possible to buy IHG Rewards Club points via a special method for 0.7 cents.  This is 0.47p.  It is obviously wrong to value a reward point at more than it would cost you to buy them but, given the small difference, I didn’t lose any sleep over it.

I am now forced to reduce my valuation of IHG Rewards Club points to 0.4p.  This is because IHG is now selling them in unlimited quantities for 0.6 cents. 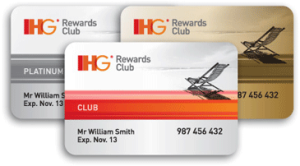 Let’s take a step back

However, IHG has a rewards option called ‘points and cash’.  If you try to book a 35,000 points per night property, you will be offered the following:

If you book a room using the second or third options above and then cancel it, you do not receive any money back.  Instead, you only receive points back.

This means that you are effectively buying points for 0.8 cents in the first example and 0.7 cents in the second example.

Over the last couple of days, a new option has started to appear.  Using the example above, it would be:

Only a few hotels have loaded this option so far.  The InterContinental Hong Kong is one of them if you try a dummy booking for that.

What does this change mean for me?

If you are booking an IHG hotel for cash, you should now work out the cost of buying the points via this ‘points and cash and cancel’ method.  The Indigo Earls Court in London, for example, is 30,000 points per night.  If it is selling for more than £120 – which it normally does – this route would be cheaper.

Similarly, the break-even point for a 50,000 points per night InterContinental is now £200 per night.  If a room is selling for more than that, buying the points may be the answer.

You may also want to re-evaluate your Accelerate promotion targets.  Your bonus is now worth less than it was.  If you were planning a mattress run to achieve your bonus, make sure it still makes sense at a valuation of 0.4p per point.

Whether this move is a precursor to a wider IHG devaluation in 2016 remains to be seen.  I doubt we will see many changes at the 3-4 star level but the 50,000 point per night ‘cap’ on InterContinental redemptions is looking a little soft in my view.

(Want to earn more hotel points?  Click here to see  our complete list of promotions from the major hotel chains or use the ‘Hotel Promos’ link in the menu bar at the top of the page.)