(EDIT:  BA has confirmed that the terminal switch is delayed with a new target date of 25th January 2017)

In early January, the British Airways lounge complex at Gatwick closed.  This is part of the preparation for the terminal switch which is due to take place in November, with easyJet moving everything to the North terminal and BA moving to Gatwick South. 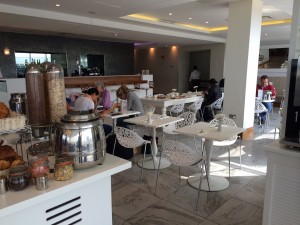 When it was announced that BA would be ‘moving in’ with No 1 Traveller for 11 months, I thought it would be an improvement!

The feedback so far on Flyertalk has been mixed, to put it mildly.  I am a little surprised by this.  It seems to come down to the following:

At peak times, the No 1 lounge is now overcrowded.  There are some reports of long waits for food (although, to be honest, not so many that it seems to be a major problem).

British Airways has decided not to issue vouchers for free champagne to First Class and Gold Card ticket holders who would otherwise have been able to get it in the old Galleries First lounge.  No 1 charges £8 per glass.  This is a fair point, although I was surprised that missing champagne had inflamed so many people.

I get a feeling that some of the bad feedback is from people who had never visited the old BA lounge and so were unaware of what was on offer before.  Last time I checked, the BA Gatwick lounge did not have a table football table, for example, unlike No 1.  The No 1 lounge buffet is also substantially better than anything BA offered. 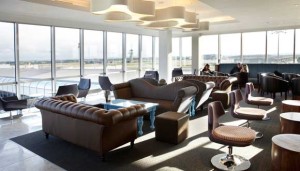 What we can say is that I wouldn’t bother turning up at the No 1 lounge at peak times clutching your Priority Pass card, as your chance of getting in is low.  You can pay £5 in advance to guarantee entrance with a Priority Pass via this website.

Whilst this has not been announced, it seems that BA and No 1 may be taking over the old Delta lounge which is two floors beneath the No 1 lounge, next to the Aspire lounge.  This may be run as a separate facility for BA Gold and First Class ticket holders, although they will struggle to get it up to much of a standard in the time available.

There are also rumours that the move to the South Terminal will be delayed until next Spring, which may account for the Delta lounge conversion.

If you have been in the No 1 Lounge at Gatwick as a BA passenger in the last 2-3 weeks – and I haven’t – do let us know your thoughts via the comments below.