This is our review of InterContinental Bordeaux – Le Grand Hotel.

Rob sent me off to Bordeaux to review the InterContinental Bordeaux – Le Grand Hotel and I loved it.  That’s the short version – what follows today and tomorrow is the long one.

I should state upfront that IHG offered HfP a free room with breakfast in order to take a look at the hotel.  We paid our own flight costs and other expenses.

The InterContinental Bordeaux – Le Grand Hotel is located opposite the Grand Théâtre de Bordeaux on the place de la Comedie, Bordeaux’s main square. The location is perfect as everything from shopping to the museums and from the River Garonne to Le Conseil Interprofessionnel du Vin de Bordeaux is within walking distance. 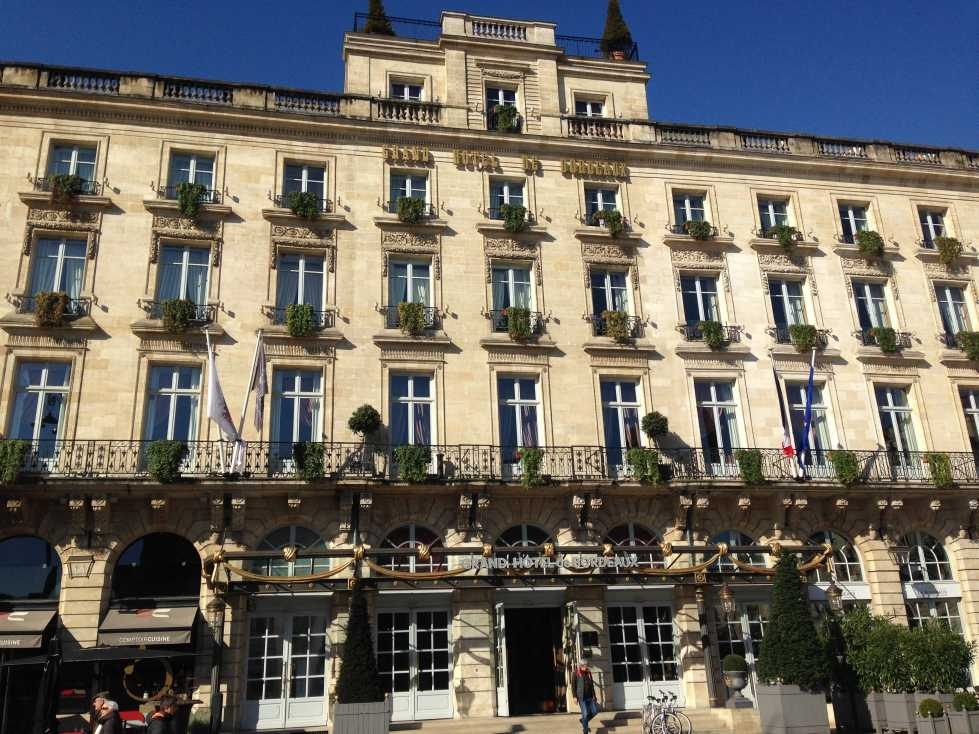 Originally built in 1789 as a private mansion the InterContinental Bordeaux – Le Grand Hotel has seen many changes over the years and eventually opened as a hotel in 1902. In 1999 Michael Ohayon became the new owner, expanding and re designing the hotel to bring it back to its former glory to open as Le Grand Hotel & Spa in 2007.

Getting to the hotel

I flew into Bordeaux Merignac airport and took a bus towards the city centre.  It looked super simple on Google Maps – it wasn’t. My bus stop had been discontinued and I ended up at Saint Jean railway station, the final destination of the bus.

After trying to explain my situation to the bus driver using rusty school French, I got on a tram that took me to the Place de la Comedie which was just around the corner from the hotel. Though the bus trip only cost €3, I decided to take a taxi on my way back to the airport (€45).

The hotel looked gorgeous in the Spring sun and everyone from concierge to receptionist was very friendly.

My room was an Executive Room on the fourth floor with a balcony overlooking the Place de la Comedie facing the Grand Théâtre de Bordeaux. 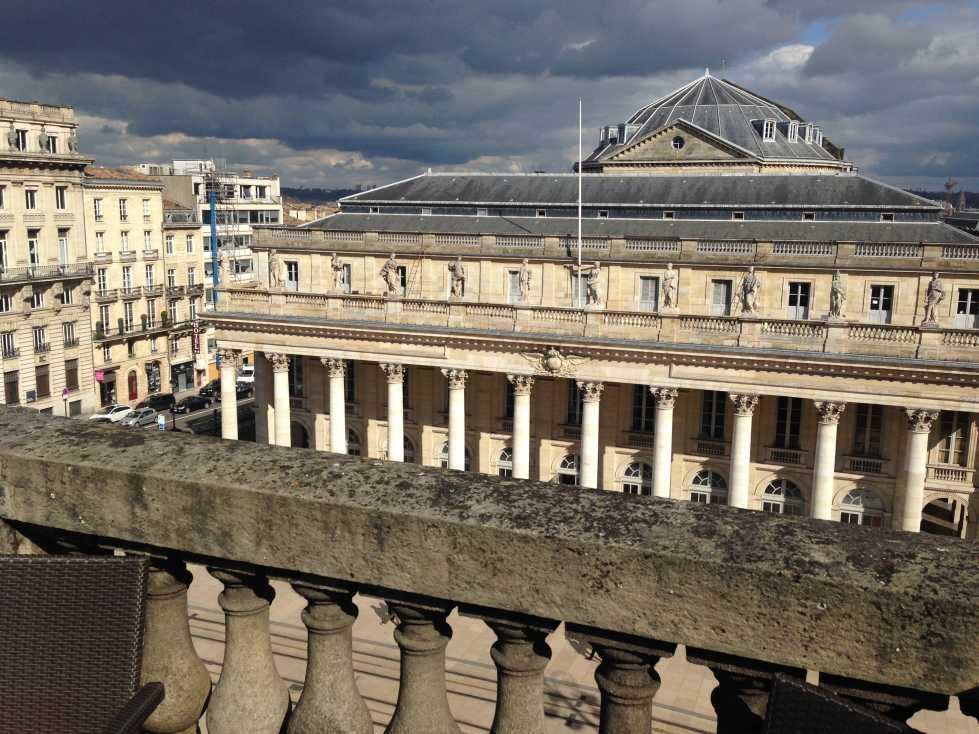 The bed was a king size and incredibly comfortable. 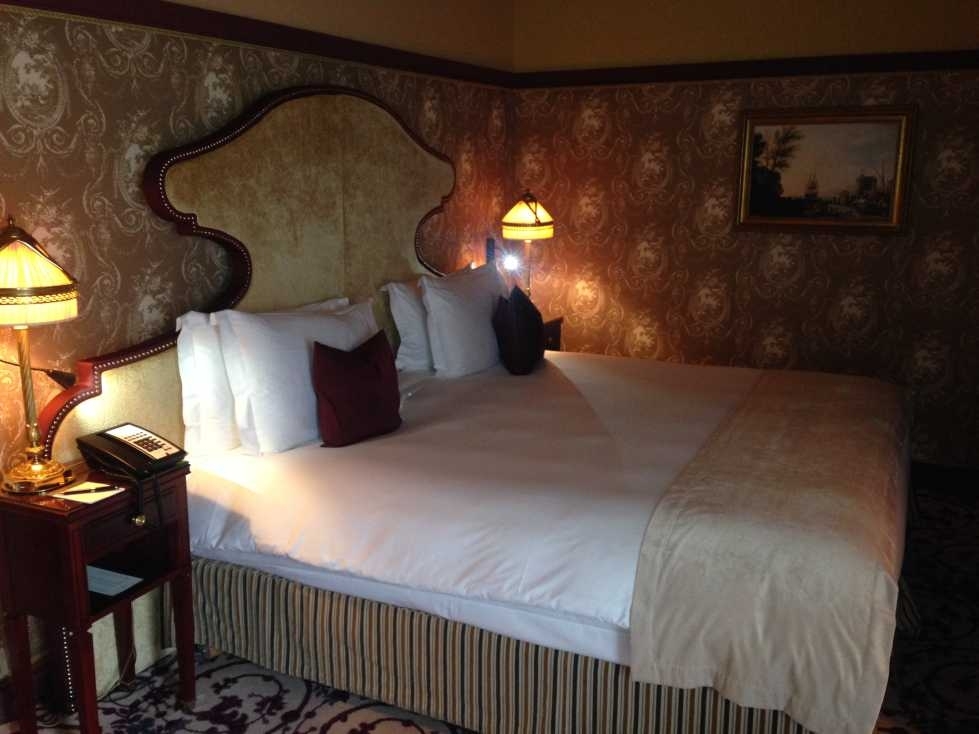 This is the view from the bedroom down the hallway. On the left is the separate toilet (without a sink which I found a little bit annoying) and the room on the right is the bathroom. 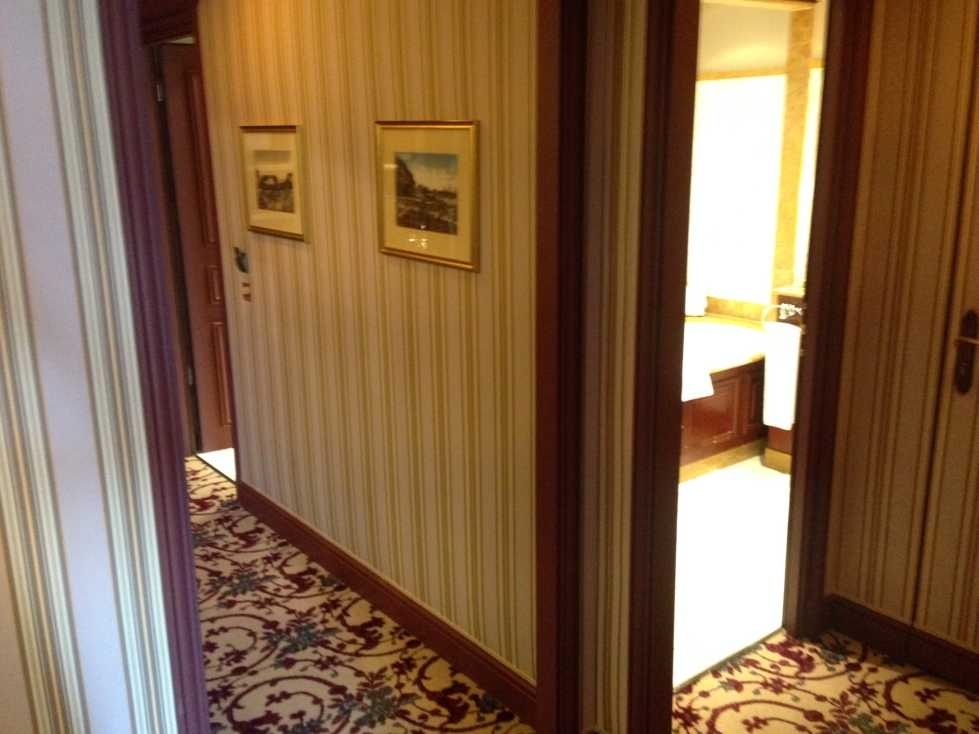 The bathroom had a shower and bathtub. 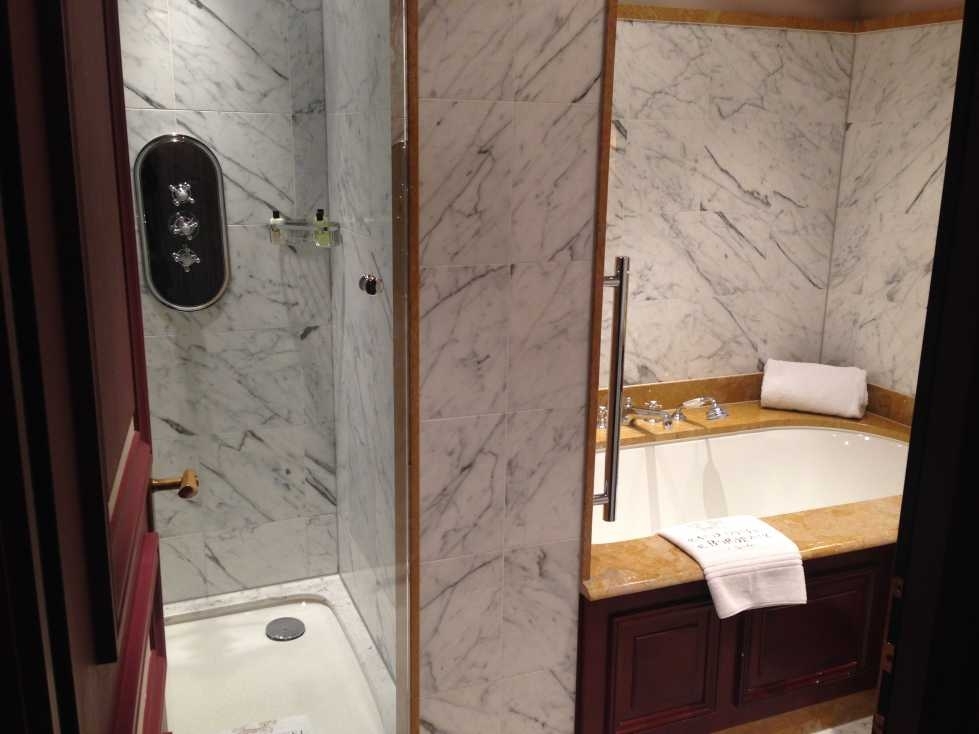 The toiletries are the usual InterContinental products. 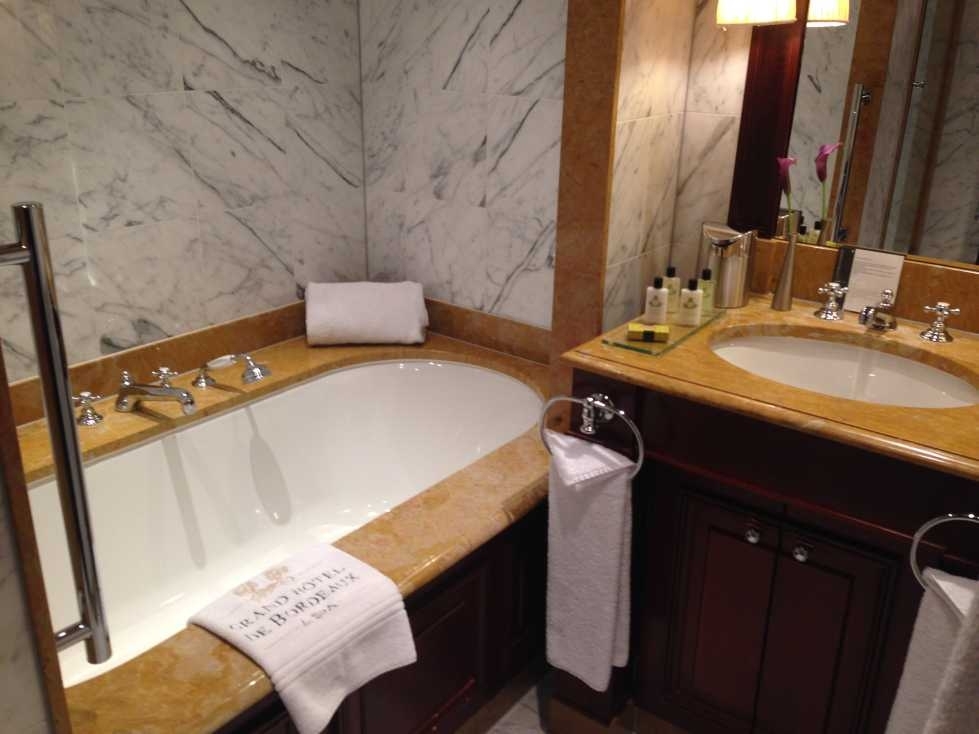 The wardrobe was large 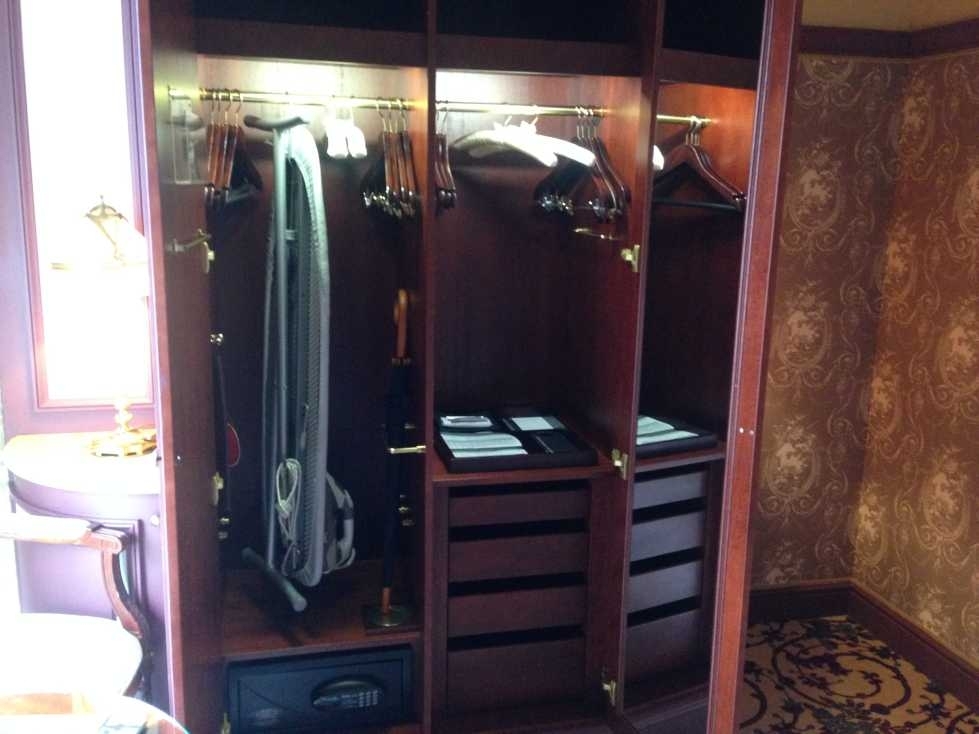 …. and at the back was a socket which I found very useful when ironing my shirt.

The room had a Nespresso machine, kettle and selection of teas. You won’t find any fresh milk and will have to be content with UHT milk capsules if you are not a fan of black tea and coffee. 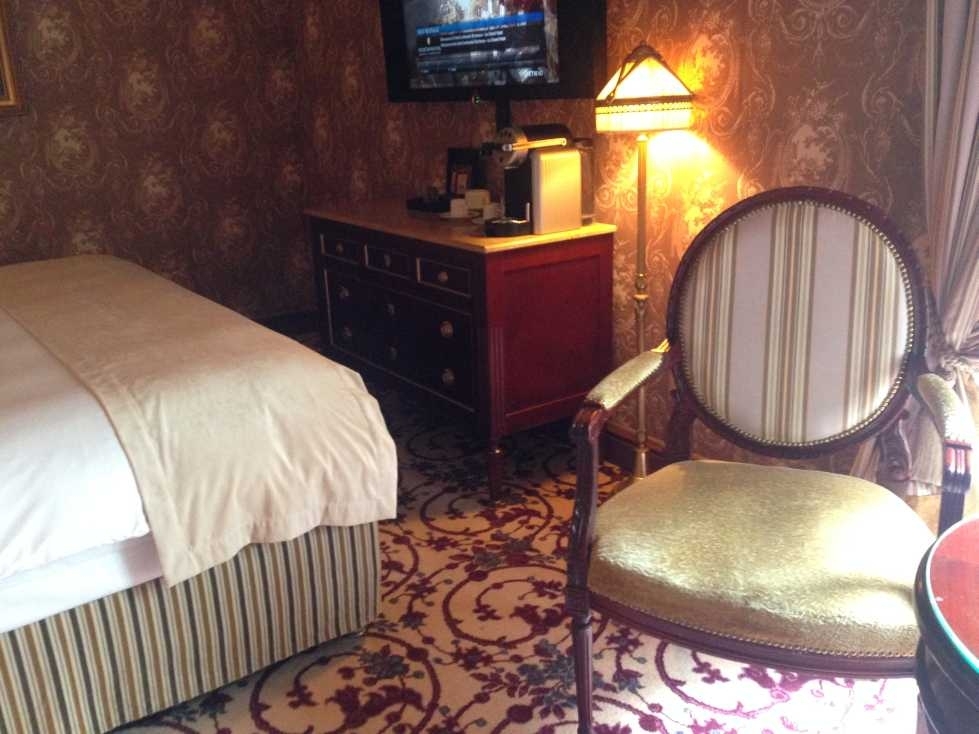 The balcony was a nice feature and I was lucky with the weather as it was sunny when I arrived.  Unfortunately it was a little bit too cold to enjoy the balcony properly. 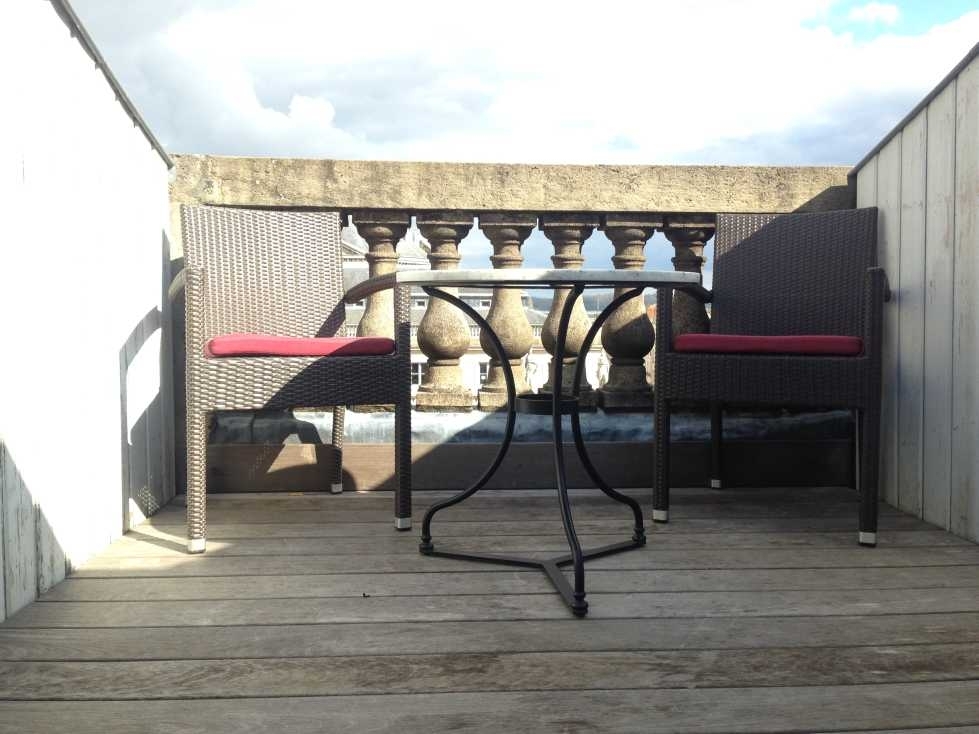 I really liked that the reading corner (with French Vogue) was flooded with natural light, as the room in general (and most parts of the hotel) was rather dark and it gave a nice contrast. 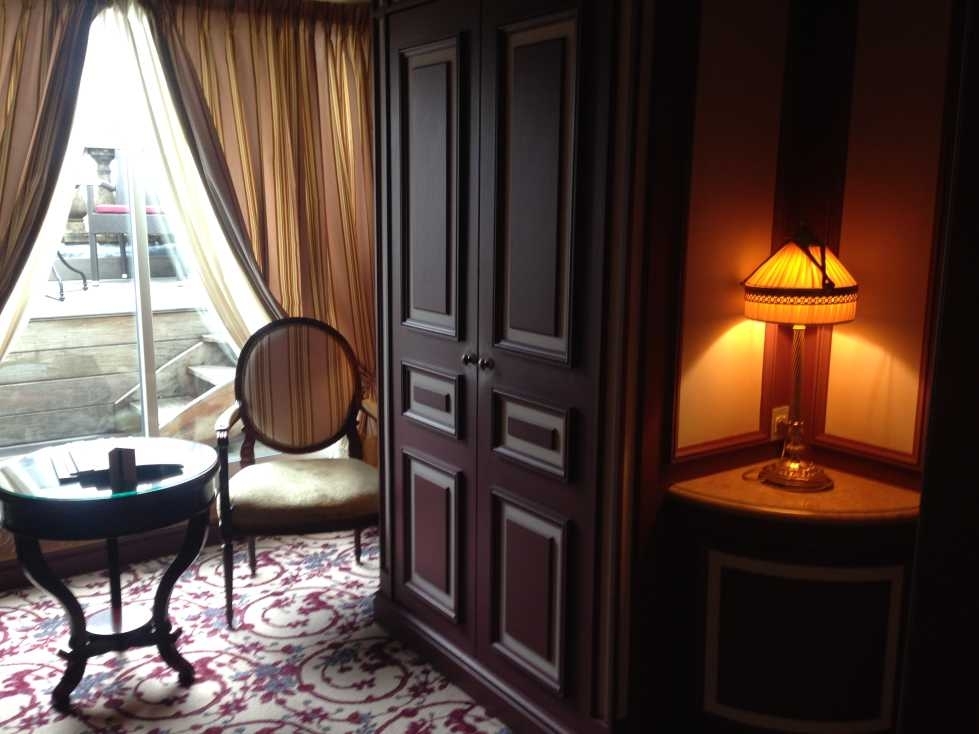 To be honest I first mistook the desk for a dressing table and was wondering where to place my laptop. As I couldn’t find another desk in the room and there were quite a few power sockets I convinced myself that this was not the place to do my make-up …. 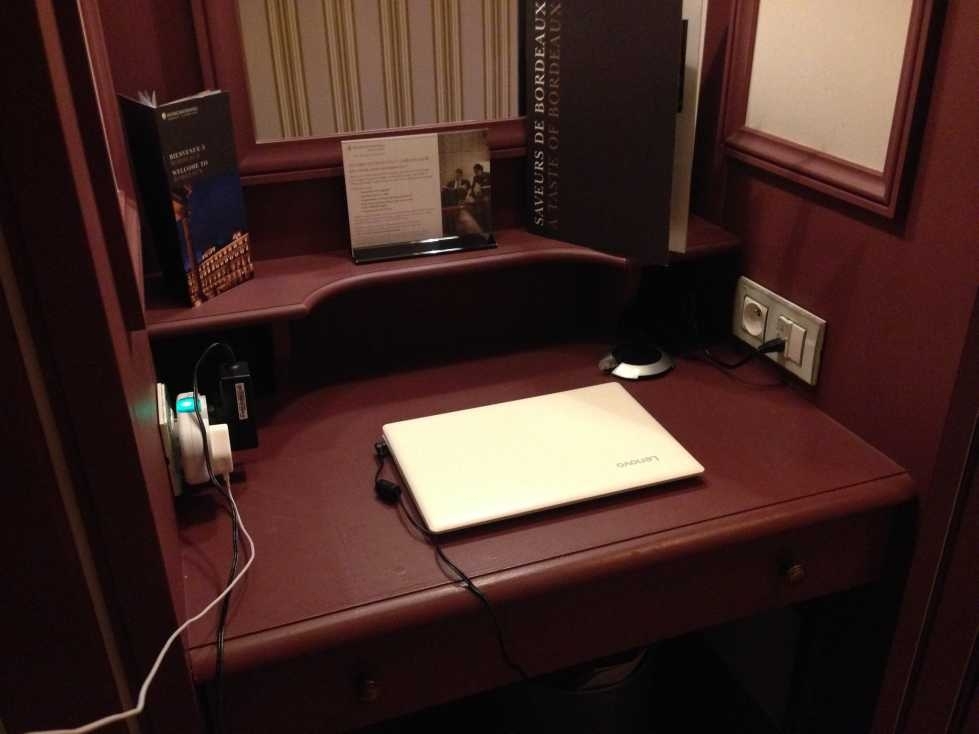 I should mention at this point that the internet was free, as it would be for all IHG Rewards Club members, and fast enough for streaming music and videos. I brought my own European adapter but if you forget yours, the hotel will lend you one for the length of your stay.

I also got to see some of the other rooms in the hotel.  All the rooms have a similar feel to them but vary in details like wallpaper and decoration.  The styling is not unlike the identically named InterContinental Le Grand in Paris.

Here is an example of a Superior Room: 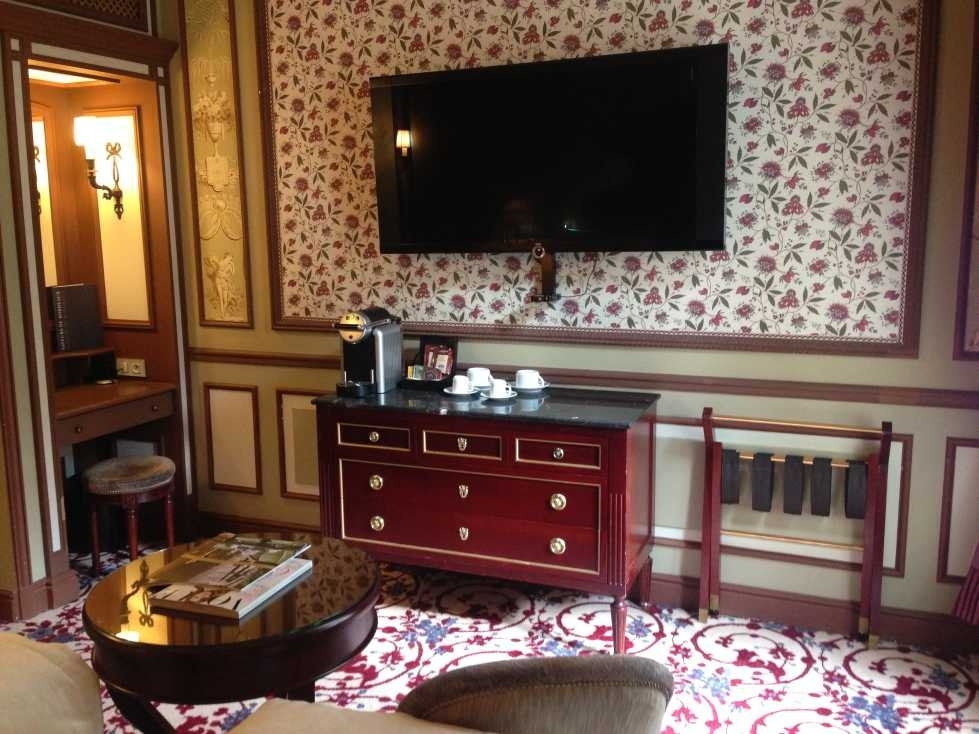 The prestige suites come with their own bar (!) where personalised wine tastings can be organised. 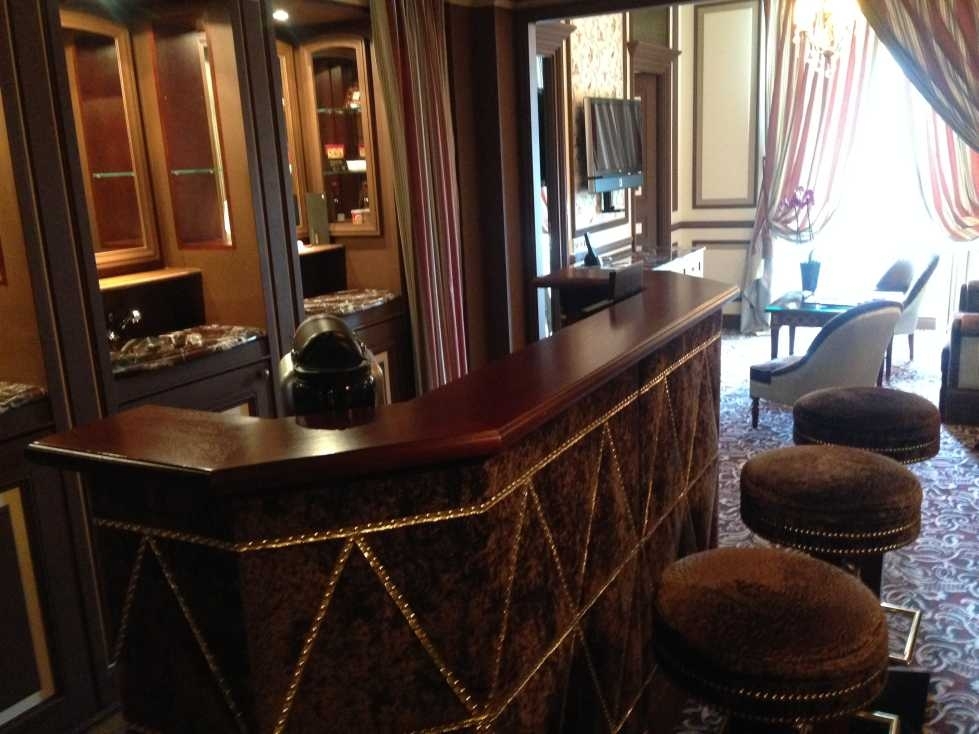 The Spa Les Bains de Lea is a perfect place to wind down and relax. You can choose from a wide range of treatments, splash in the pool and relax.

The pool is a bit too small for swimming laps – the picture below shows roughly one half of it. Nevertheless, with its large windows, glass roof, red columns and massage jets, it is a very pleasant place to spend some downtime. 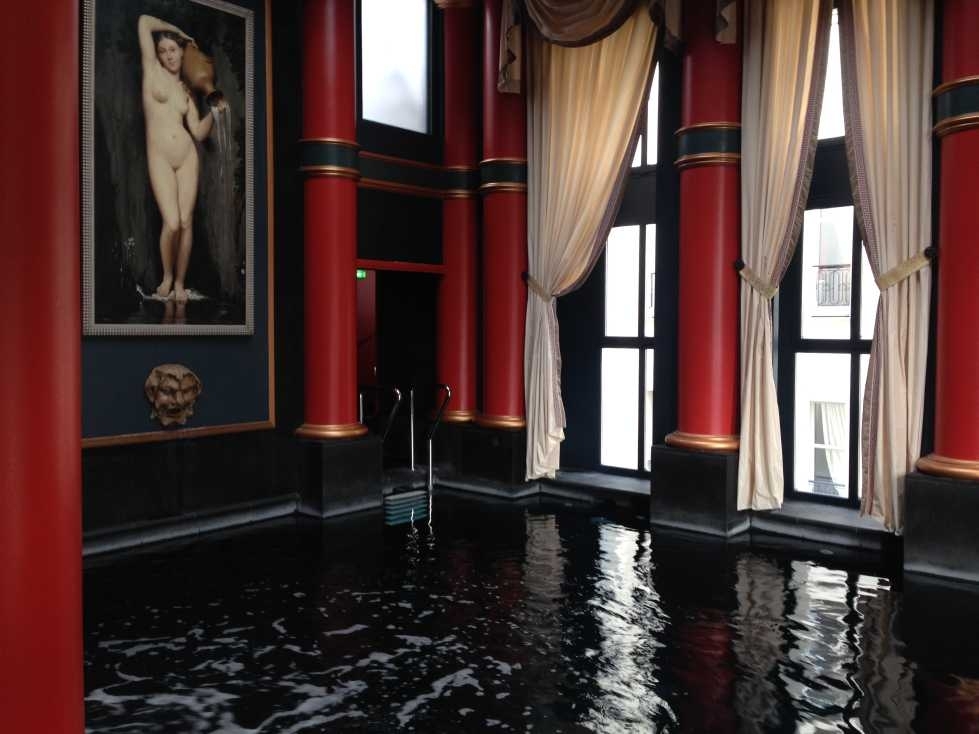 Next to the pool are relaxing beds to read or take a nap. 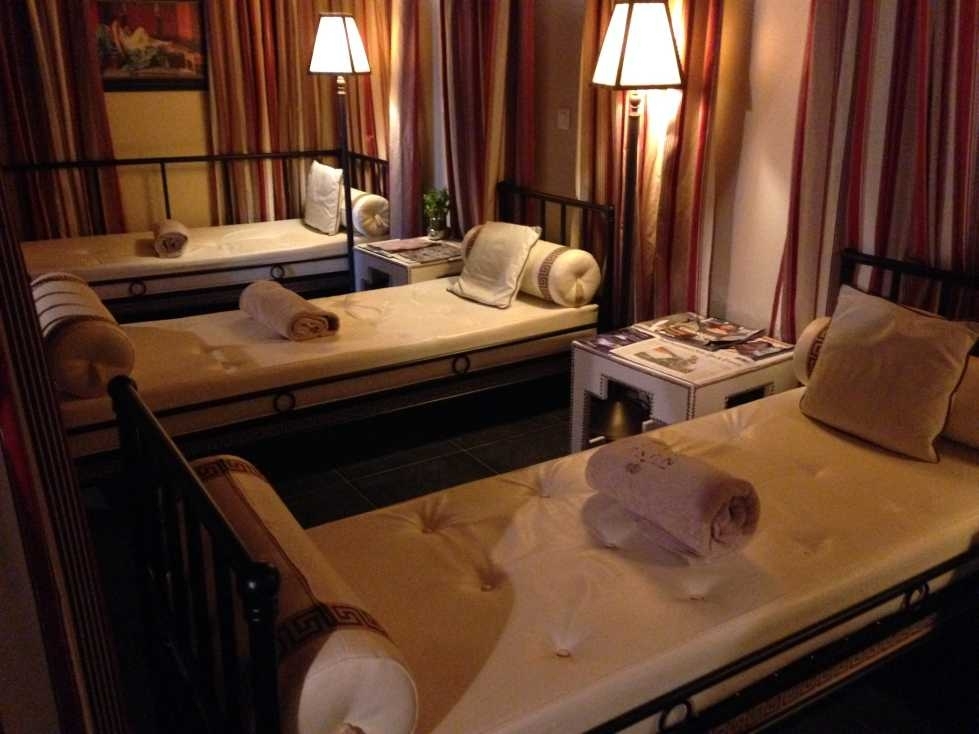 The sauna has a big window which made it confusingly bright – and the view was pretty much just roofs and pidgeons. 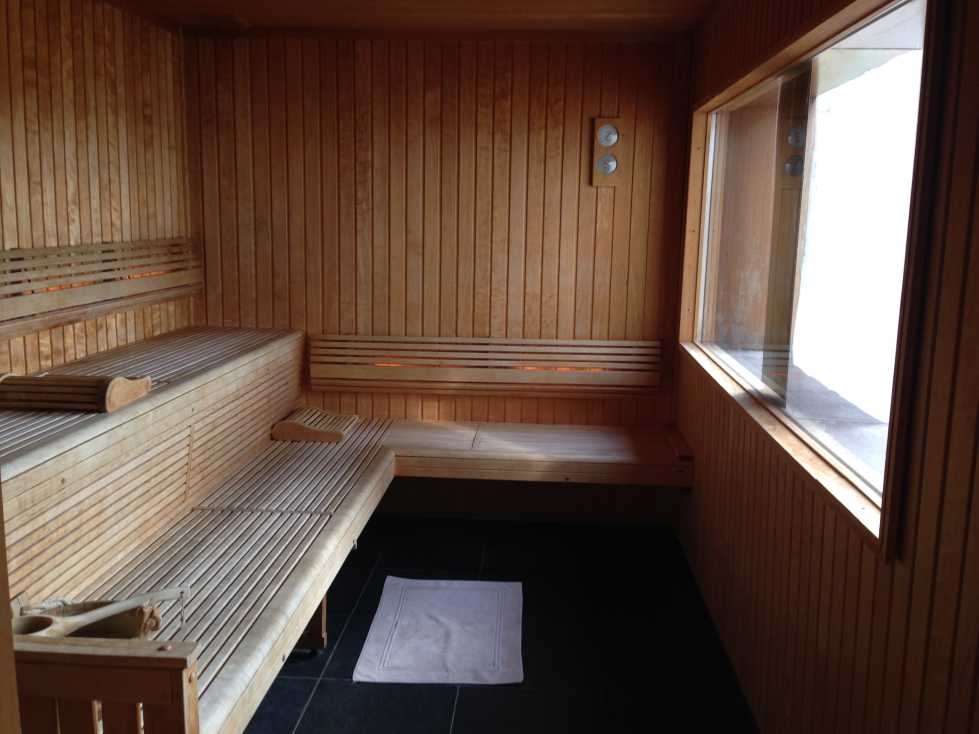 On the first floor overlooking the pool you can make yourself a cup of tea or coffee (Nespresso) and relax in the spa bar. 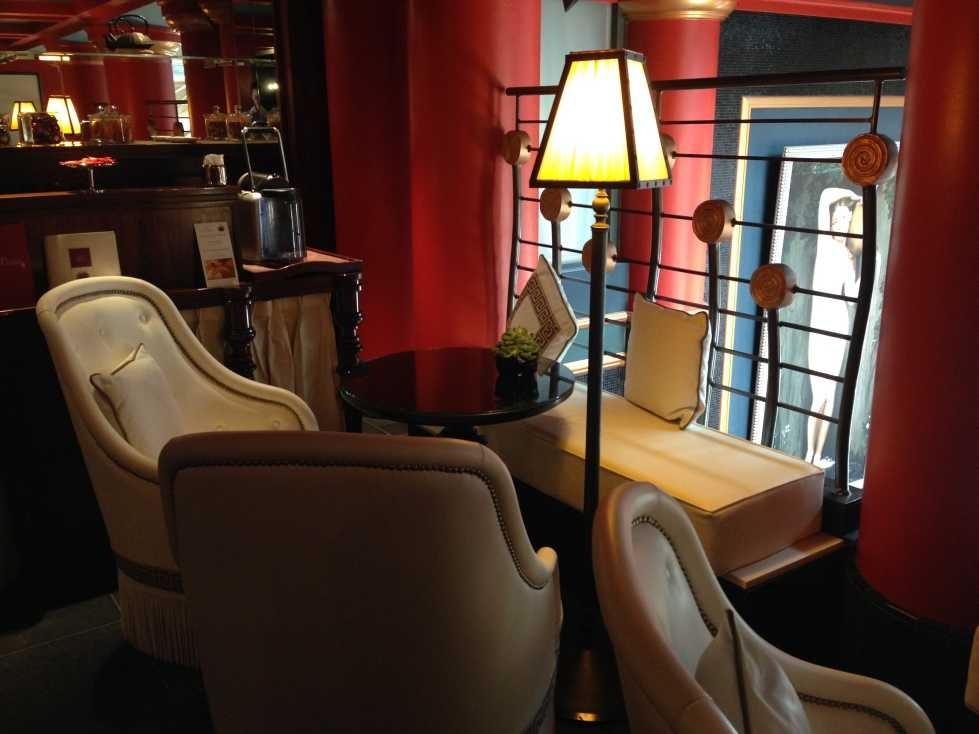 Children under the age of 16 are unfortunately (or fortunately, depending on your opinion!) not allowed in the spa area including the pool and gym.

I was quite impressed by the size of, and equipment in, the gym. A great place to work out – though every Bordelaise will tell you to go for a run along the Garonne instead. 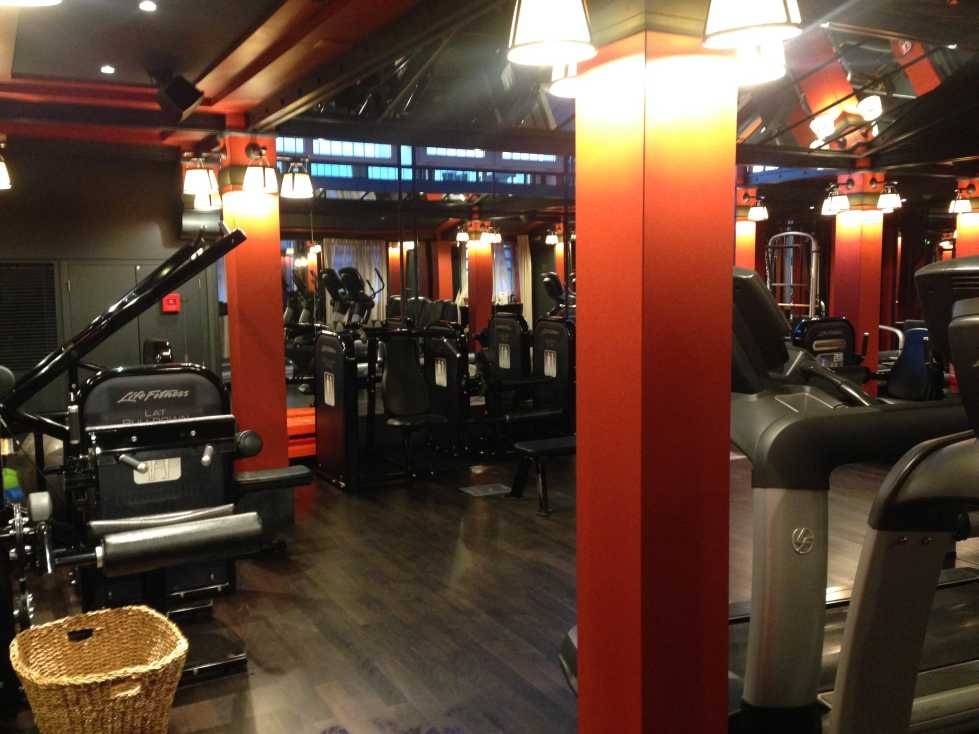 The refreshment area had water, towels, fruits and nuts (and newspapers in case you are able to read whilst on the treadmill). 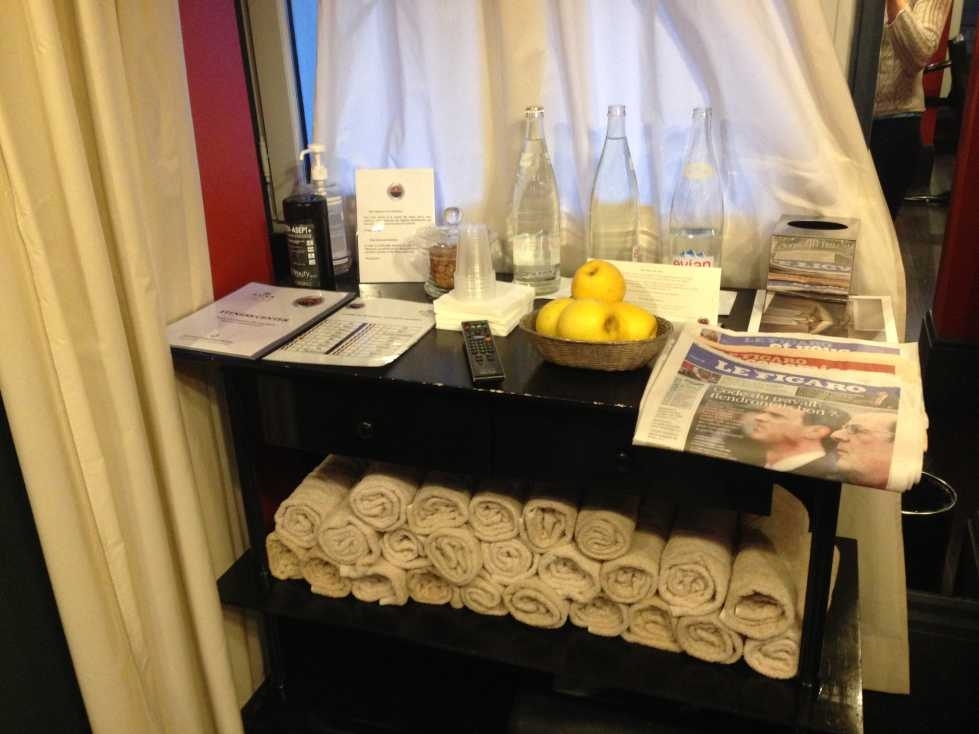 I was very taken with the InterContinental Bordeaux – Le Grand Hotel.  Part two of this review will follow tomorrow, focusing on the bar and restaurants, one of which has a Michelin star.  There will also be a bonus fourth daily article looking at some of Bordeaux’s tourist sites.

You can book or find out more about the hotel on its website here.