This is my review of The May Fair Hotel in London which is operated by Radisson Edwardian, albeit unbranded, and is part of the Club Carlson loyalty scheme.

You may wonder why I was in a hotel that is three tube stops from my house.  Last year I attended an event in Stockholm organised by SAS and as part of that I was given some SAS EuroBonus points.  One redemption option is for Radisson hotels and, as I didn’t have any plans for a one way short haul Star Alliance redemption flight, this seemed like an interesting use of them.

I topped up my SAS balance with Amex Membership Rewards points.  Availability at The May Fair Hotel was VERY restricted – I booked the hotel back in September and late April was the first midweek night that fitted in with my diary!  I could book online via the SAS website and, as an added benefit, the room came with full breakfast. 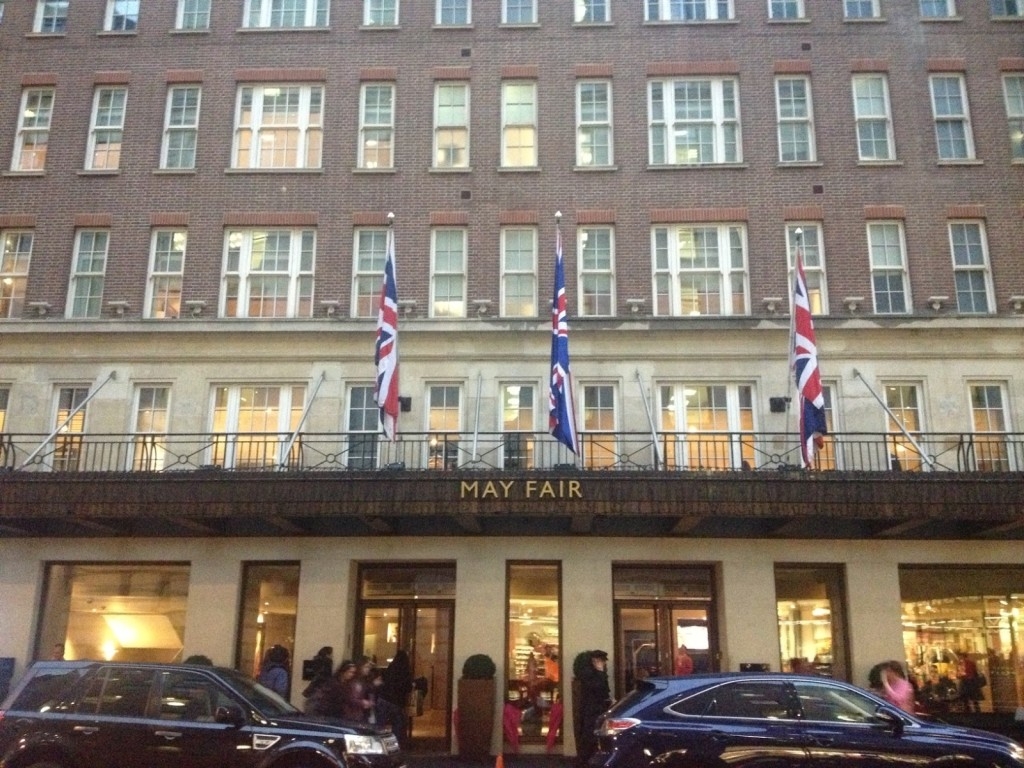 My stay started badly.  Reception wanted a paper voucher which I didn’t have, only an email from SAS.  I gave them my Club Carlson Gold card and they promptly allocated me the worst room they had.  It had some sort of noisy ventilation equipment outside the door, was on a corridor currently being repainted and had this view: 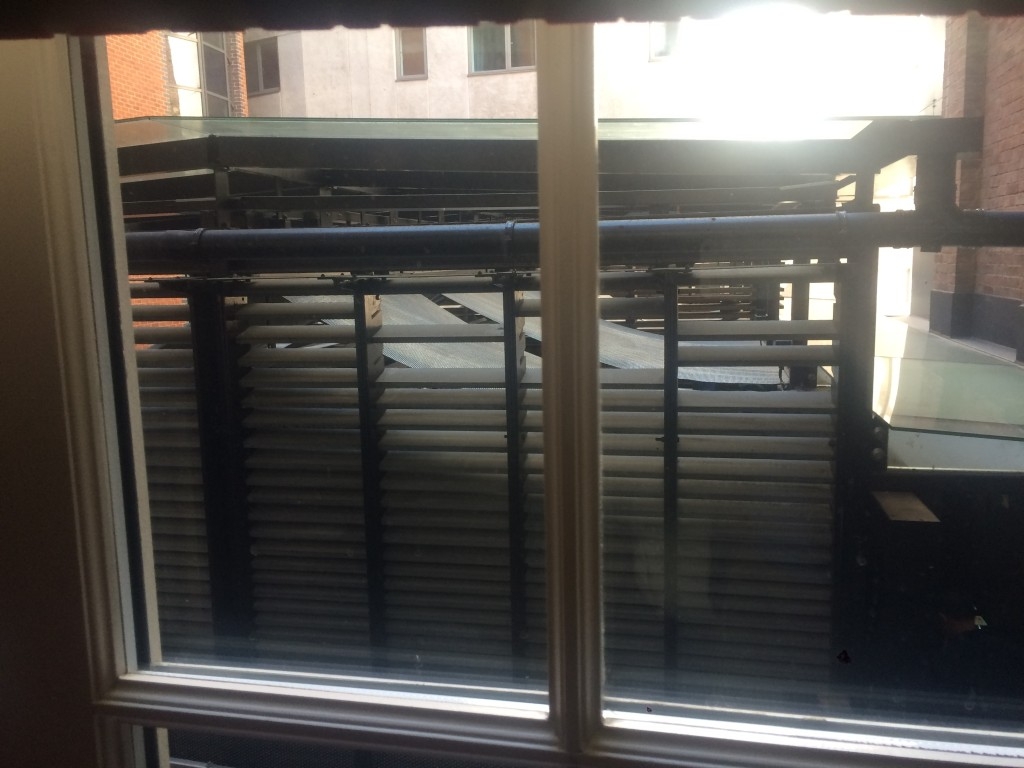 A short discussion later and I was given something more suitable on the 6th floor overlooking the street and with lots of light.

This is the room I had.  In terms of square footage, you really can’t complain given that this is Mayfair.  The longer I was in the room the more I began to appreciate the size. 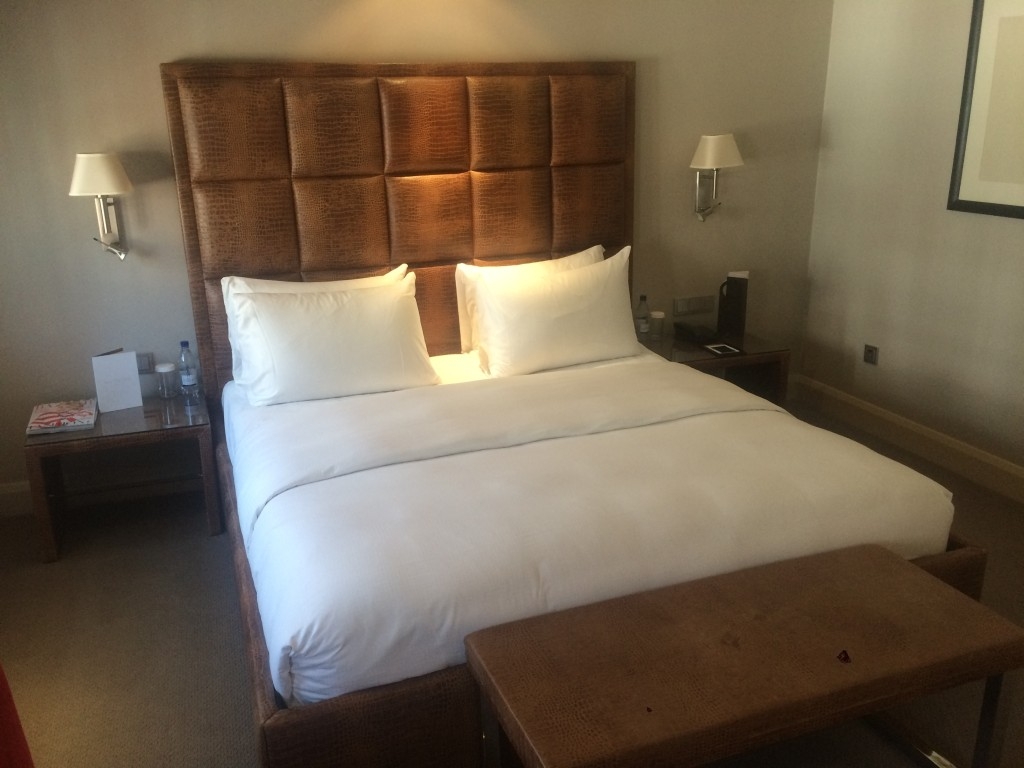 ‘Sparse’, unfortunately, is the word that came to mind.  If you’d seen the furnishings in person, the word ‘cheap’ would also have popped into your head. 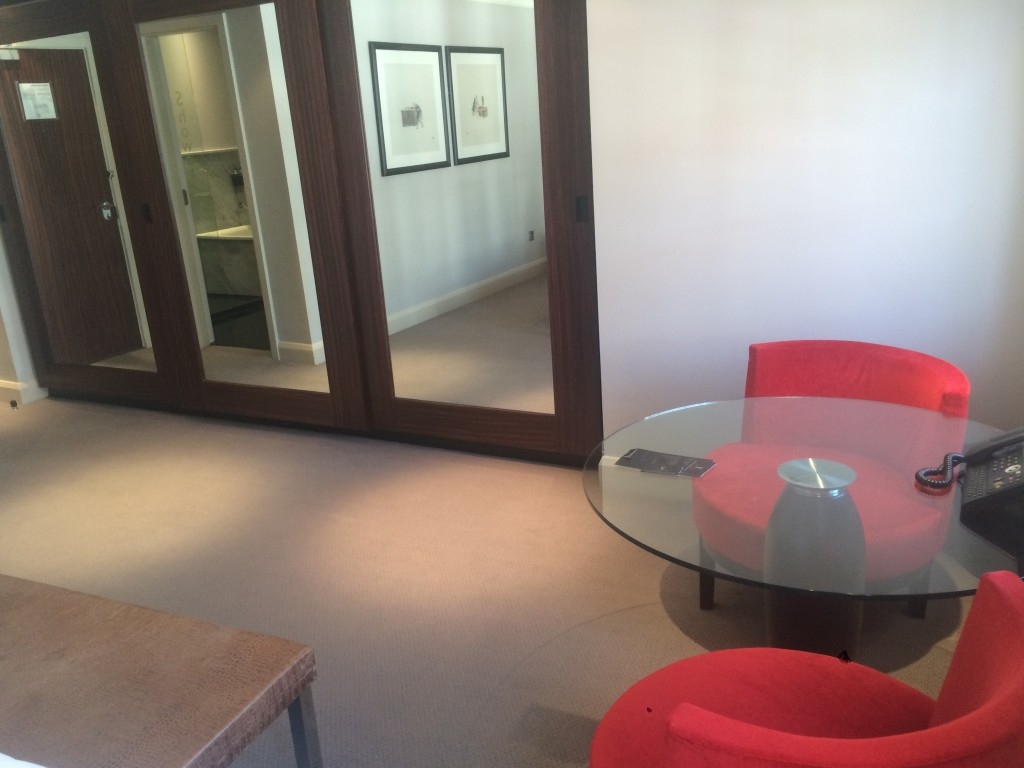 Note the lack of a desk.  There is a scratched glass table as you can see which is next to a plug socket.  The top wobbled as round table tops often do.  Glass tables, of course, also make it impossible to use a mouse.  At least the wi-fi was fast and stable.

The mirrored wardrobes didn’t really do it for me – sitting in bed and looking at myself was a bit weird.  If you’re not alone you may find more merit in this …..

I was impressed by the size of the bathroom and the amount of marble used: 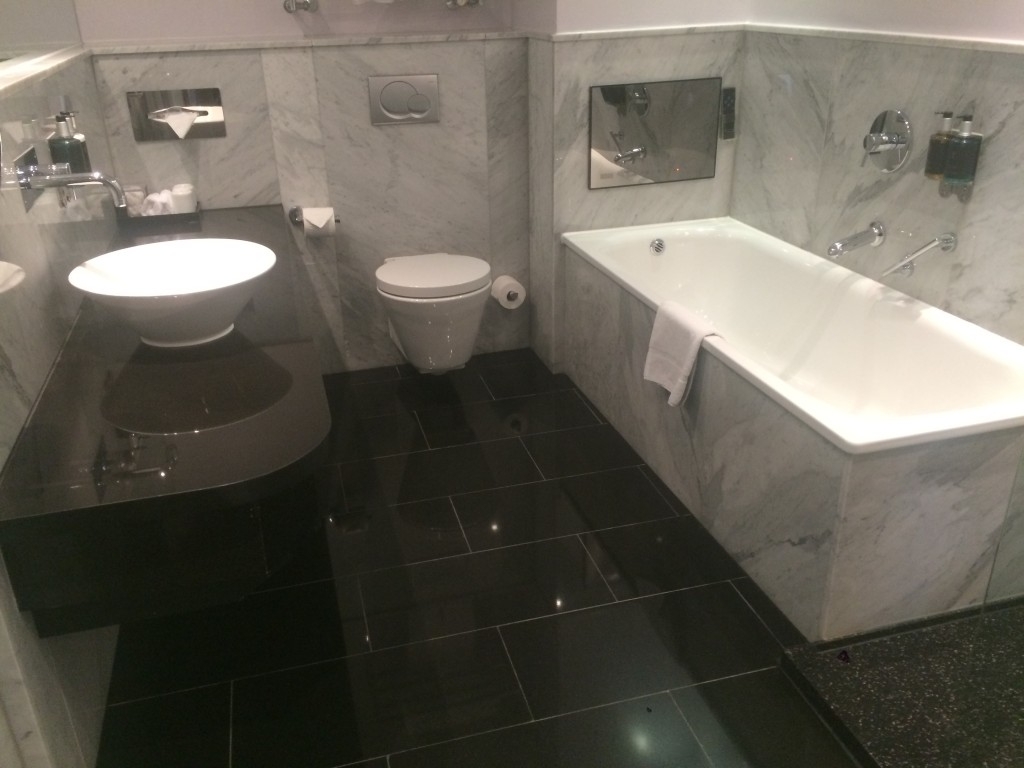 Again, though, it is cheap.  There is more than enough space for a second sink so why not put one in?  Similarly, the toiletries are bolted to the wall, just like a Holiday Inn Express, as you can see on the right.

And then, the crowing glory …. when I came to make a cup of tea, I found that the cups were wrapped in plastic bags.  If you have ever done a driving holiday in the USA and stayed at low-end motels, you will recognise the look.  It isn’t classy. 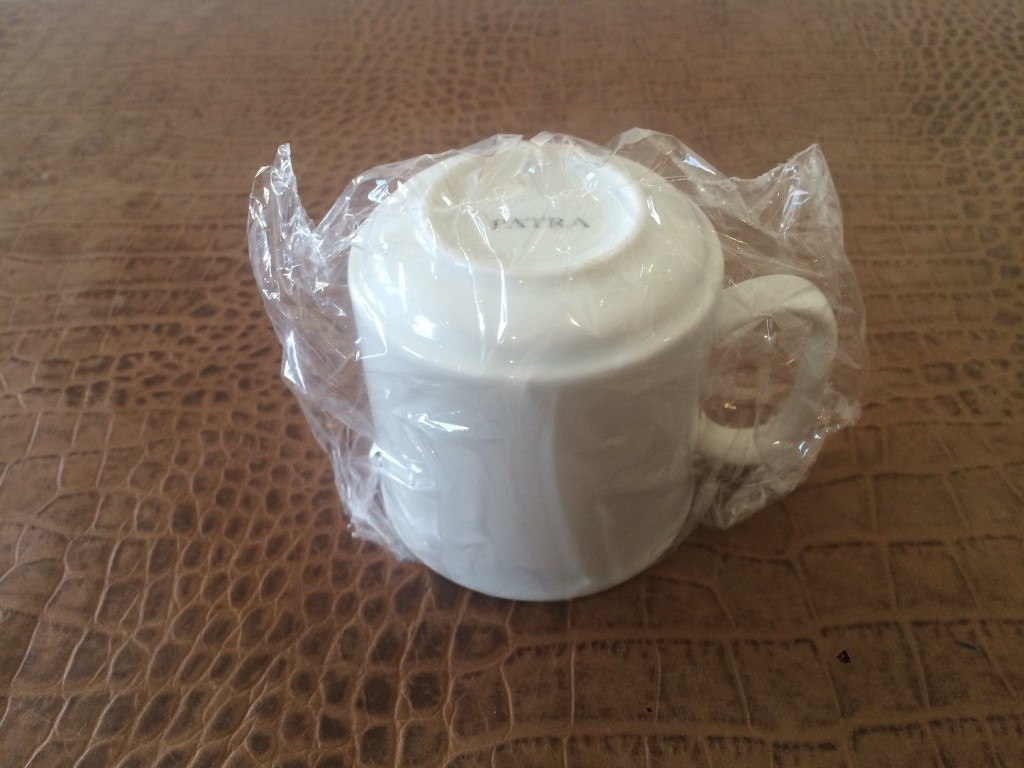 Intriguingly, whilst the tea tray was on gliders, you couldn’t actually pull it out because the sliding door on the wardrobe had been badly designed and did not slide back far enough ….

The May Fair Hotel does a good breakfast.  I can’t knock it.

There is a decent selection of food and it is well presented: 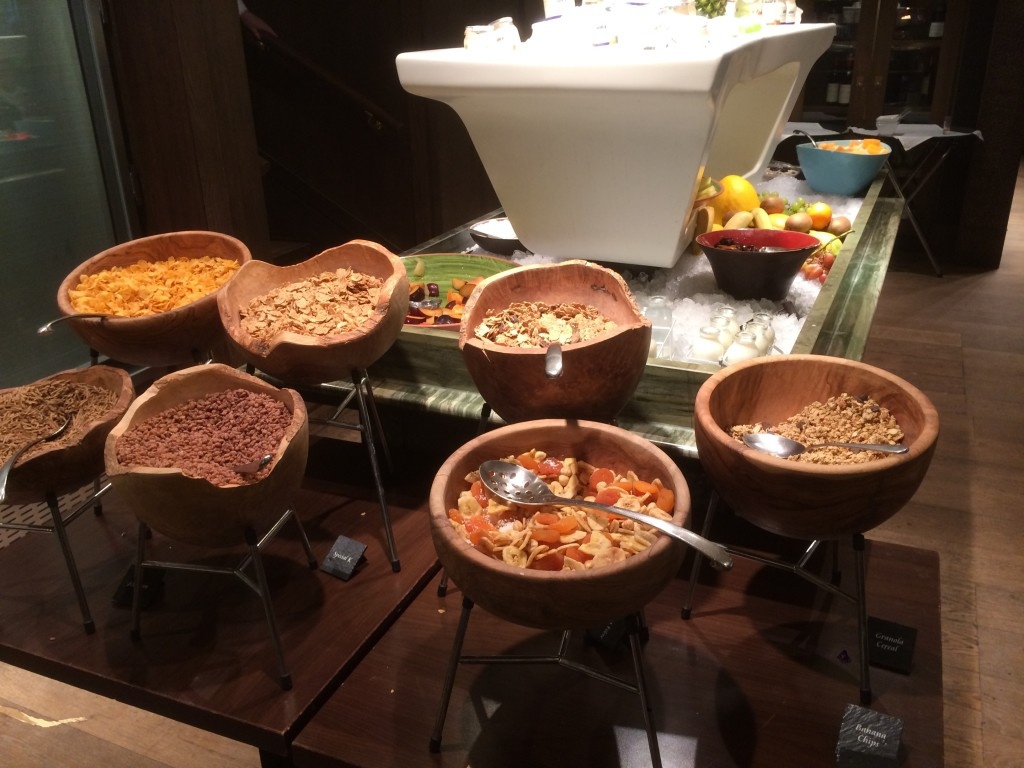 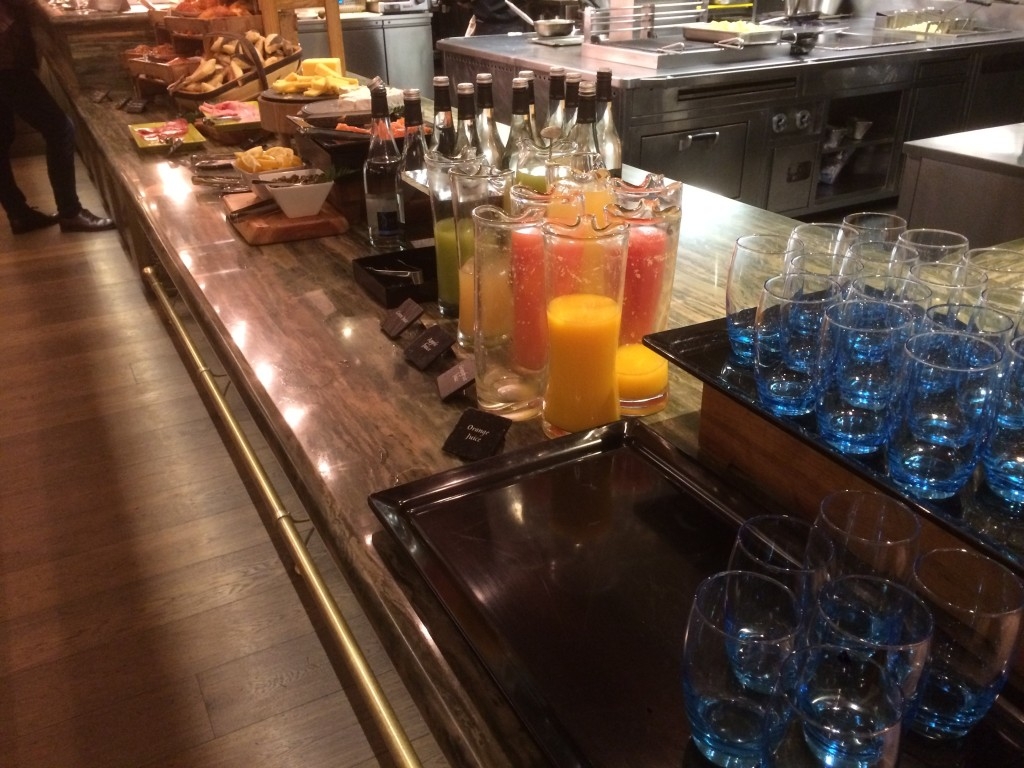 You are invited to order off menu if there is anything else you want, so I asked for an Eggs Benedict.  This was good but oddly one egg was hard boiled and the other was runny.  The staff were very attentive at all times.

The only downside, albeit I ate a little late at 9am, is that a lot of non-residents were using the restaurant for breakfast meetings.  This includes one large group of eight noisily poring over PowerPoint presentations.  This meant that the room, which is not huge in the first place given the size of the hotel, was busier than it needed to be.

The bar, not pictured, is a light and pleasant spot.  As it has its own entrance on the street, it also gets a lot of non-resident traffic.

There is no pool and I didn’t check out the gym or spa.

There is nothing fundamentally wrong with The May Fair Hotel.  The location is ideal for a huge number of things, especially Bond Street.  The rooms are modern and a good size.

For the money, however, there are plenty of other options which also fit the bill and which don’t have the issues I highlighted.  For a points redemption, I would look at the 50,000 point Club Carlson London options before spending 70,000 points here.   The key reason to stay at The May Fair Hotel is location and if that isn’t important then there are other, better, places to stay.

You can find out more about the hotel, and book, on its website here.