This is my review of Virgin Atlantic’s Upper Class seat on the new Boeing 787-9 service.

I reviewed the Virgin Atlantic Clubhouse lounge at Heathrow Terminal 3 here.  After a merry couple of hours eating, drinking and, erm, getting my hair trimmed, I wandered down to the gate.  As I have said before, I hadn’t flown Upper Class for almost 20 years so it was time to set things right.

For clarity, I used my own Flying Club miles to book this flight and paid the taxes myself. 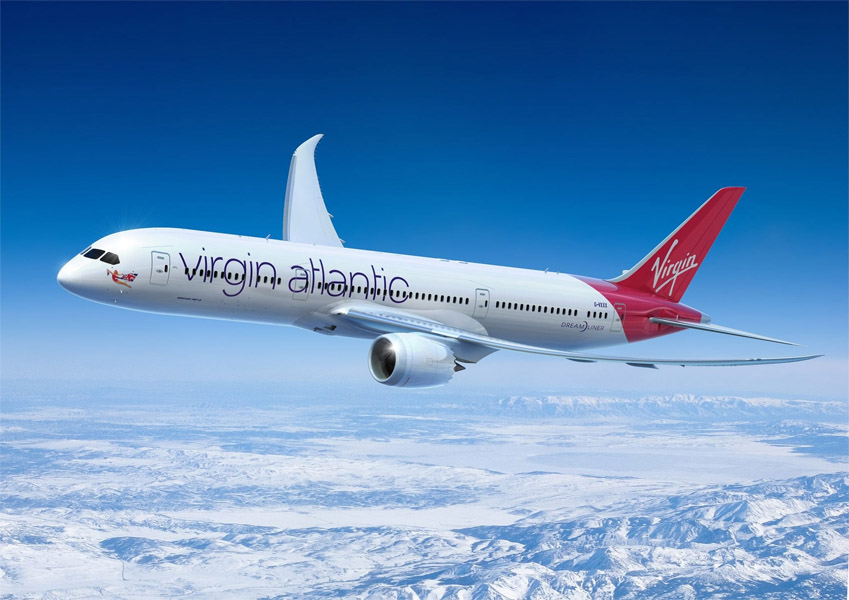 I had purposely sought out a Boeing 787 service as this is the newest version of the seat.  If you are heading to New York, you are only likely to find it on the daily Newark service, VS1.  The Virgin seat varies across aircraft types – it is currently planning to rip out the Upper Class seats on its A330 seat due to substantially negative customer feedback.  Do not assume that anything you read here will apply to any other aircraft type.

The Boeing 787 is certainly not a reinvention of the Upper Class seat, however.  The changes are mainly cosmetic – a different curvier seat shell and a new aubergine leather.

The key issue for airlines when planning a business class cabin is how to maximise seat numbers whilst also maximising passenger space.  The British Airways solution is unique, having half the seats facing backwards and slotting them together in a ‘yin yang’ pattern.

Option 2 is to have all the seats facing forward, with your feet slotting into a gap under the seat in front.  This means that the seats do not have to be six feet apart.  Emirates and Turkish, among others, do this.

Option 3, which has become the most popular, is to have seats placed at an angle.  This is often known as a herringbone layout.  Virgin Atlantic has gone with this.

On the 787-9, the aircraft width only allows for three seats per row.  The layout is 1-1-1.  In practice, this means that you have the window seat on the A side facing a low wall across the aisle.  Behind the wall are the other two seats – in text message speak it would be ‘/ | / \’ ! …. and on the other side of the wall: I was in 8A.  I had luckily escaped getting 7A which has no window.  As the bar is at the back of the cabin, you will find it quieter the further forward you go.  Solo travellers may prefer an A seat.  Couples may prefer G and K seats in the same row.

My initial thought is that the seat felt narrow around my shoulders – and given that I only wear a 40 inch suit jacket, that was a little worrying.

My second thought was that it felt odd facing towards the centre of the cabin – and the low wall running down the middle – when I had a window immediately behind me!  The position of the window became more troublesome after take off, as the shadow cast by my head made it difficult to read.   This is from my seat looking forward: There is little at-seat storage.  There are, however, absolutely no shortage of overhead bins as Virgin has them down the centre of the cabin as well as over the windows.  (Some airlines have decided that storage bins in the middle of the cabin are unsightly – this is true, but they are also hugely practical.)

Let’s crunch some of the facts about the seat first.  The target market for this seat in the investment banker business passenger on an expensive flexible ticket.  Such a person, and I was such a person for 16 years, wants privacy.  This is what the Virgin Upper Class seat offers.

You won’t be talking to the people in front or behind you, because you can’t even see them when you are seated.  If you are in an ‘A’ seat, as I was, you aren’t facing any other seats either – you face the low wall.  You are not going to be disturbed.  You can see why such an arrangement is attractive, given that if you fly on British Airways Club World you run a risk of being in the middle pair of seats and effectively sharing a double bed with a stranger for the entire flight.

Every Virgin seat has direct aisle access, unlike BA.   And, unlike BA, no-one is going to jump over your feet in the middle of the night on the way to the loo.

For a couple, however, the Virgin seat may not appeal.  With young kids I can imagine it being very tricky as you cannot see what anyone else is doing.  Those middle seats in BA Club World are a perfect playground for a pair of children, with the parents sat on either side to stop them getting away!

Before take off I was offered a glass of champagne and, erm, some crisps.  Classy.  The champagne was Gardet Bru Premier Cru which, at around £27 a bottle by the case, is not a bad choice.  The wine and champagne selection is curated by Berry Bros which gives it some credibility.

The crew were, overall, very pleasant and I don’t have a bad word to say about them.  As usual, I don’t want to dwell on the crew because they can be variable from flight to flight, whilst the seat and the food are more constant.

I spent a while trying to get comfy with the seat.  In the end, I settled on putting my feet up on the footstool, which can also be used as a guest seat if a colleague or your partner wants to eat with you.  The problem here is that the food table is fairly low and wouldn’t sit over my legs so I had to put my feet on the floor whenever the table was out.

The lack of an arm rest on the left hand side began to bother me after a while.  Having an armrest on one side but not the other is a bit odd – one arm is relaxed whilst the other hangs in space. (EDIT: according to a comment, there is actually a button which makes a 2nd arm rest appear.)

As this was a day flight, I did not get a chance to try out the seat as a bed.  Unlike the BA seat, which simply glides flat, the Virgin seats flips over when in bed mode a la Singapore Airlines.  This means that you do not need to sleep on a sweaty leather surface.  People I know who have flown this seat overnight tend to say good things about it and find it a smoother sleep experience than Club World.

Wi-fi and IFE on a Virgin Atlantic Boeing 787-9

Virgin Atlantic does have wi-fi on its Boeing 787-9 fleet.  The bad news is that it costs £15 and so I chose to pass.  The upside of the charge is that, if you did pay, the speed should have been acceptable.  Unfortunately the first generation of in-flight wi-fi – luckily now being phased out – only works if only a handful of people are connected.  In the long run, BA’s decision to hold out until the ‘next generation’ equipment was available may prove sensible.

If you’re willing to pay, it is there to use.  BA doesn’t give you the choice …. yet.

The in-flight entertainment system is called VERA.  The 11 inch TV is far too close to your face when it is opened out, but you can slide it backwards.  The good news is that, unlike with some airlines, the TV can be folded away when not in use.

The choice was BA-like in terms of quantity, ie not very big at all compared to, say, Emirates.  The limited selection of new movies was noticeable and the entire film catalogue was not huge.  What I DID like was the ability to create a ‘favourites’ list as I scrolled through the menus.  I didn’t have to start searching back through the entire system later in the flight to try to find an episode of Veep I vaguely remembered seeing.  Another impressive feature is the time of every programme is shown, alongside the time remaining for the flight.  This makes it easy to decide what you can squeeze in.

Each Upper Class seat on the 787 has a universal plug socket and a USB socket.

In Part 2 of my Boing 787 Upper Class review, available here, I will take a look at the food and the Upper Class bar and draw some conclusions for those paying cash and those using miles.

If you want to know more about the Virgin Atlantic Boeing 787, there is a special section of the Virgin website here.

How to earn Virgin Points from UK credit cards (August 2022)