This is my review of the brand new menu and relatively new seat in Virgin Trains East Coast First Class.

I had to dash up to York and back yesterday which gave me my first exposure to Virgin East Coast trains since the seating and catering was overhauled. 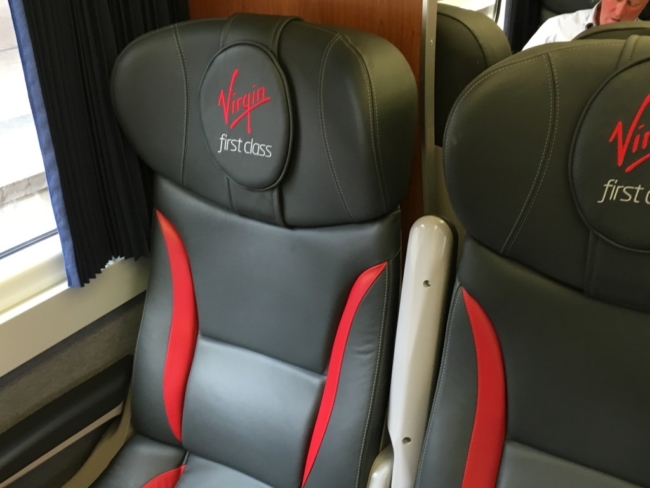 It was, well, new.  I’ve sat in different variants of this seat for 30 years now and there wasn’t anything revolutionary that Virgin could do with it.  I had no complaints though – it was big and comfortable.  None of your Eurostar-style thin seats here …..

Let’s talk about the food.  Note that the discussion below only applies to the Monday to Friday menu.  You will find the weekend offering less ambitious.

The new James Martin-designed menu launched around six weeks ago in First Class.  I found it very impressive indeed.

For a start, ‘proper’ food is always available.  British Airways – if we use that as a comparator – serves fairly lightweight mid-morning snacks and afternoon tea outside of main meal periods.  I am actually quite fond of the BA afternoon tea but I think I am in a minority.

Until 11am, you get breakfast.  This comprises:

porridge with banana and maple syrup

That is a pretty good selection in my book.  However, I missed it as I was on the 11.08 outbound!

For the rest of the day, the options are:

Chicken curry with rice and a miniature naan bread

On the outbound I had the curry.  The portion size wasn’t huge but it was hot and tasty.  The naan bread was also good.  See here: 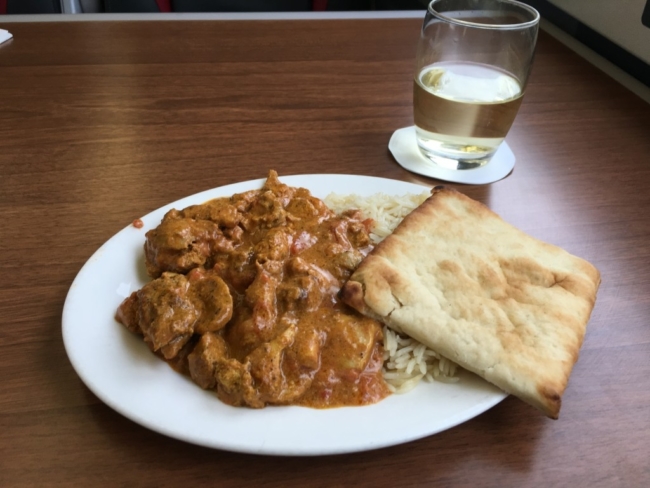 Curry never photographs well.  However, I liked it so much that I had another portion on the return journey.  I also had half a wrap as they had some spare on the trolley – this was also very good.

There is also a long drinks menu.  Everything is free except for prosecco which is charged at £6, presumably for a mini-bottle.

All in all, I was impressed by the new menu.  If the price difference between Standard Class and First Class is under, say, £25 to York or Leeds then I would recommend it without hesitation.  For a journey to or from Scotland from London I would happily pay a larger premium.

Remember that you earn Virgin Flying Club miles or Nectar points if you book East Coast tickets via the official website.  Booking direct with Virgin is now the only way to get free wi-fi if travelling in Standard Class.