airberlin, a British Airways partner in the oneworld alliance, announced a big increase in its US flight schedule yesterday.

This is excellent news for Avios collectors.  The taxes and charges on airberlin flights booked using Avios points are very low.   A one-way from the US has charges of just £4!  A return trip is around £75.  This is a substantial saving on the £500+ charged by British Airways on a redemption.

Anika flew New York to Berlin on airberlin last week (the photo below is hers) and that review is coming up soon.

You can read more about airberlin redemptions in this ‘Avios Redemption University’ article here.  The only downside, apart from having to get to Germany, is that you cannot use a British Airways American Express 2-4-1 voucher and that all flights are priced at ‘peak’ Avios pricing irrespective of day.

Business class seats are capped at 2 per flight although occasionally more open up later.  With a small business class cabin, however, you shouldn’t rely on this.  The seating is fully flat and better than British Airways in terms of space and layout. 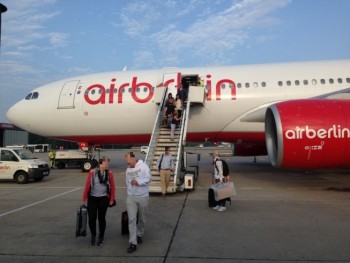 The Summer 2017 airberlin schedule will see the number of weekly flights between Berlin and Dusseldorf and the USA increase from 55 to 78.

This is a summary of what is new based on what I was sent yesterday by the airline:

The new Orlando service is on top of existing airberlin Dusseldorf services to Miami and Fort Myers.

airberlin also flies to Chicago – that services is not impacted by these changes.

There is a snag with the US West Coast flights as the comments below point out.  The extra tiny flight distance between Berlin – LA / SFO and London – LA / SFO kicks them into a higher Avios pricing bad.  A one-way in Business from San Francisco to Berlin would be 90,000 Avios + £4 rather than (to London) 75,000 Avios + £300ish on BA.

This is the 2nd phase of US expansion following an upcoming step-up for Winter 2016 with Chicago, New York and Miami seeing increased frequencies.  Dusseldorf to Los Angeles will also operate this Winter instead of taking a break.

What is not clear at the moment is where the aircraft are coming from.  I imagine that Etihad, a 49% shareholder in airberlin, may be supplying a few.  As far as I know airberlin does not have any long-haul aircraft on order.

At the same time, airberlin is rumoured to be in talks with the Eurowings subsidiary of Lufthansa about selling its non-core short haul routes.  If true, this would see the aircraft and crew operating all airberlin routes which do not touch Berlin or Dusseldorf transferred to Eurowings.  This is not an unlikely rumour since such services do nothing for Etihad in terms of providing feed to long haul and airberlin continues to lose substantial amounts of money.