There are two stories here, with the tenuous link that both have reduced the options you have for redeeming your Avios points.

Loganair operates flights to the Highlands and Islands of Scotland, primarily from Glasgow, Inverness and Edinburgh.  It is probably best known for its service from Glasgow to Barra, where the plane lands on the beach and the flight times are adjusted to the tide table (photo below).

Loganair and Flybe are ending their franchise agreement on 1st September 2017.  From the date flights will operate under the Loganair brand.

It is reported that the British Airways codeshare will remain in place allowing you to book through tickets from, say, Heathrow to Sumburgh in Shetland via Edinburgh.  Unless Loganair signs up as an Avios partner, you will not be able to redeem Avios any longer on these routes.  You WILL be able to continue to earn Avios and British Airways tier points as long as you book revenue tickets under a BA flight code.

More information on this story and other goings on in Orkney can be found here.

I have always been intrigued by the Barra flight and I may try to give it a go next year whilst I can still redeem. 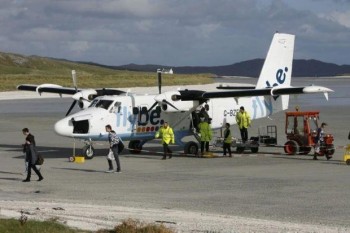 I have written a couple of pieces recently about the ending of Avios earning on package holiday bookings and the end of the ability to spend Avios on Eurostar tickets.

Both of these changes take effect from 1st January.  However, it seems that another change was quietly slipped through recently with immediate effect.

It appears that you can no longer redeem Avios for Disneyland Paris park tickets.  We did this a couple of years ago – it was reasonable value although I lived to regret it in the end.  Avios do not send you tickets – they send you a voucher which you have to exchange for a ticket.  And the queue to exchange the voucher for a ticket was 45 minutes long …..

You can still earn and spend Avios on Disneyland Paris hotel breaks until the end of 2016 via this page.

If you spot any other redemptions missing from avios.com, please let me know.