This is my review of Melia’s new Gran Meliá Palacio de los Duques in Madrid.

After one night in Ibiza and an Air Nostrum flight to Madrid, I found myself at the Gran Meliá Palacio de los Duques and here is my review.

Melia gave me a free night including breakfast to check out the hotel.  I paid for my own incidentals including the steam room, room service and cough medicine!

This hotel has been a major project for Melia and is now their flagship hotel in the capital of their home country.  It stands on the former sites of the Santo Domingo Convent, the largest Dominican convent dating back to the 13th century, and the Palace of the Dukes of Granada of Ega y Villahermosa which was built in 1851.

After an extensive renovation, adding contemporary touches whilst keeping the original neo-renaissance spirit, the hotel opened in Summer 2016.  The hotel website is here.

Even in Winter it is very impressive.  In Summer I can imagine that it is effectively a  self contained urban resort with its rooftop pool and spa.  If you have Melia Rewards Gold status via an American Express Platinum card then this may be a good way of using your 20% discount voucher.

The Gran Meliá Palacio de los Duques is located in the heart of Madrid close to important sights like the Royal Palace, the Senate building and the opera house.

It took around 25 minutes to get to the hotel from the airport by taxi. If you take one of the official taxis outside the airport, you pay a fixed fee of €30 regardless of traffic. According to Google Maps it would take a bit more than an hour by public transport. 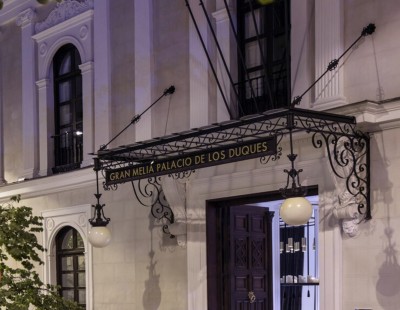 The entrance hall was impressive with its wooden staircase: 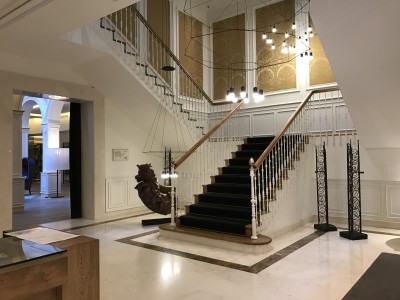 … and reproductions of paintings by Diego Velázquez.  These can be found throughout the whole hotel in the public spaces as well as the bedrooms.

The long reception table had enough space to check in five people at the same time and I never saw anyone waiting.  This picture was taken from the hotel’s website: 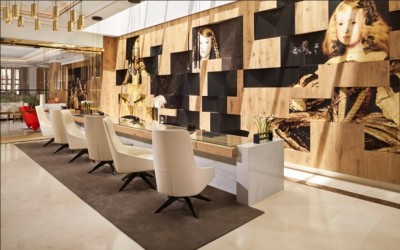 At the back in the picture above is the entrance to the RedLevel lounge.  RedLevel is the hotel’s boutique hotel within a hotel. In the RedLevel lounge, photo below, guests can check in and have breakfast and drinks as well as snacks throughout the day. 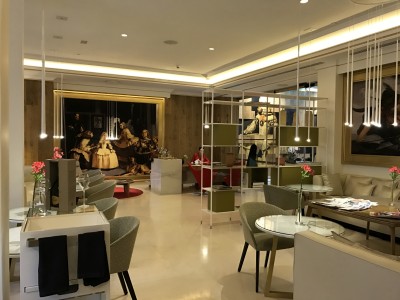 I stayed in a Premium Room with a view over the internal courtyard.  The video below gives a good impression of how it looked. 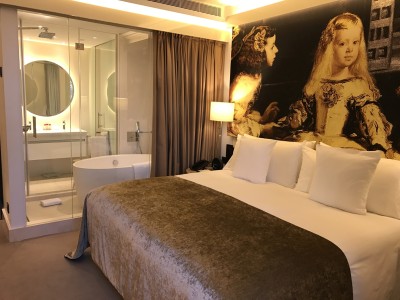 There was a desk (not always guaranteed in new hotels these days) with two chairs and a bottle of water and some chocolates as a welcome gift.

On the wall was a EU plug socket as well as USB sockets. There were further sockets next to the bed. 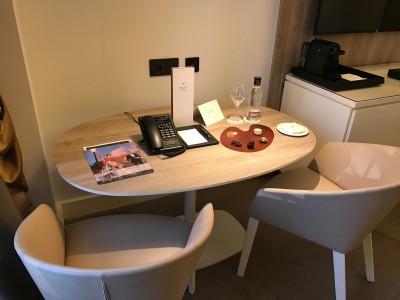 My room had a Nespresso machine with three capsules and a couple of teabags – though there was no kettle.

The TV had Spanish, English and German channels. 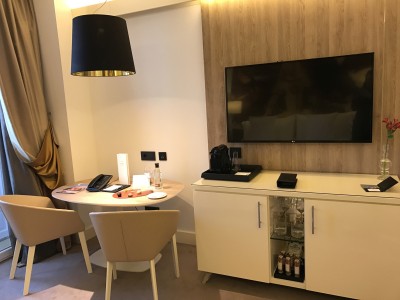 Two robes and slippers were in one of the two cupboards.  I’ve never really mentioned the quality of slippers before as I assumed they were always the same – not very tight and almost a tripping hazard. However the ones at the Gran Melia were great and I wasn’t afraid of falling out of my slippers when I walked to the spa. 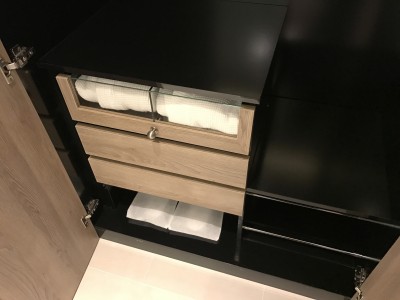 The bathroom was arranged as a large cubicle inside the bedroom with a glass wall that could be covered with a curtain – in case you didn’t want to watch TV whilst taking a bath.  It had two sinks, a toilet behind a separate door and a shower room with freestanding bathtub. 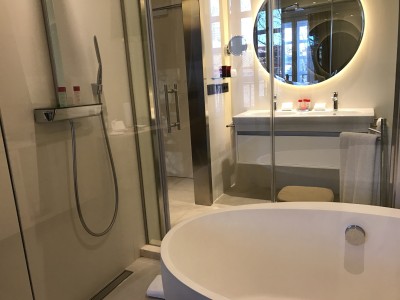 The toiletries were by Clarins – I took them home but I’m yet to use them! 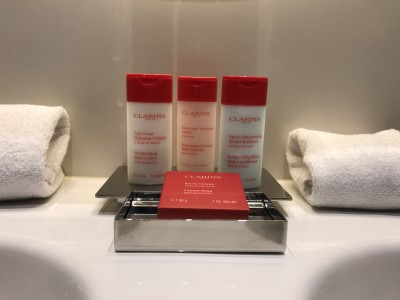 Healthwise it was probably been the worst week for me to travel. With a terrible cough, headache and more I wasn’t able to leave my room for dinner and decided to order room service and watch Netflix (good wifi!). I had salmon with fries and a mixed salad. Including a tray fee of €5 I paid €32.

(I should mention the fantastic member of staff who showed me to my room.  When he heard my horrible cough, and that I hadn’t brought my cough medicine because I couldn’t get it through airport security, he volunteered to go out and buy me a bottle – and he did!  This was a lovely gesture which really made a difference.) 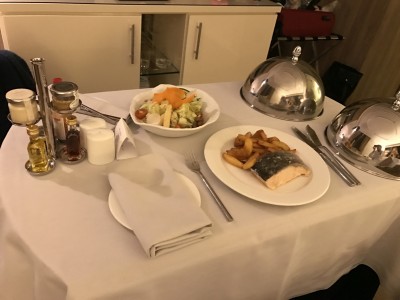 This is a picture of one of the suites with a glass wall separating the bedroom area from the living room area. There are some suites in the hotel that have proper walls for separation. 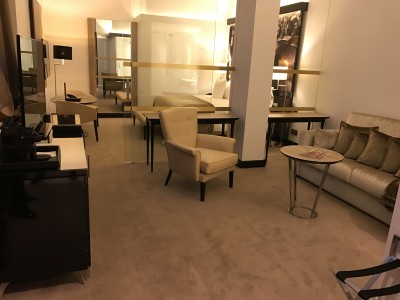 The bathroom in the suite looked very much like the one in my room, and all the other rooms.  Every room in the hotel has a bathtub and a shower. 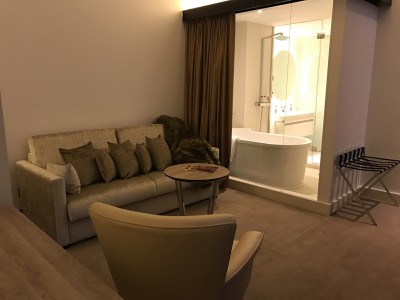 This is a picture of a Deluxe Red Level. It was slightly bigger than my room and comes with the perks of Red Level. 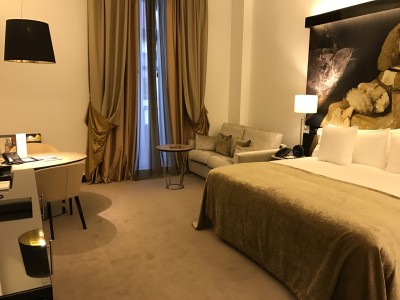 To give you a better impression, here is a 90-second YouTube video of the Gran Meliá Palacio de los Duques in Madrid (you can subscribe to our YouTube channel via this page – this is the same link to visit if the video does not appear below).

This was part one of my review of the Gran Meliá Palacio de los Duques with its gorgeous rooms.  In part two (click here) I will focus on the public spaces including various restaurants and the Thai spa.