This is my review of the Element Frankfurt Airport Hotel.

Last November I went to Amsterdam to stay at the new Element by Westin Amsterdam, a Starwood property that focuses on sustainability.

The parent company owns a second property in Frankfurt – which was actually the first Element hotel to open in Europe – and we had an open invitation to visit.

Luckily we could tie it in with the Melia and Hilton / Curio hotel reviews in Spain and the review of the LATAM / LAN flight from Madrid to Frankfurt, which is something Rob has wanted to cover for years. 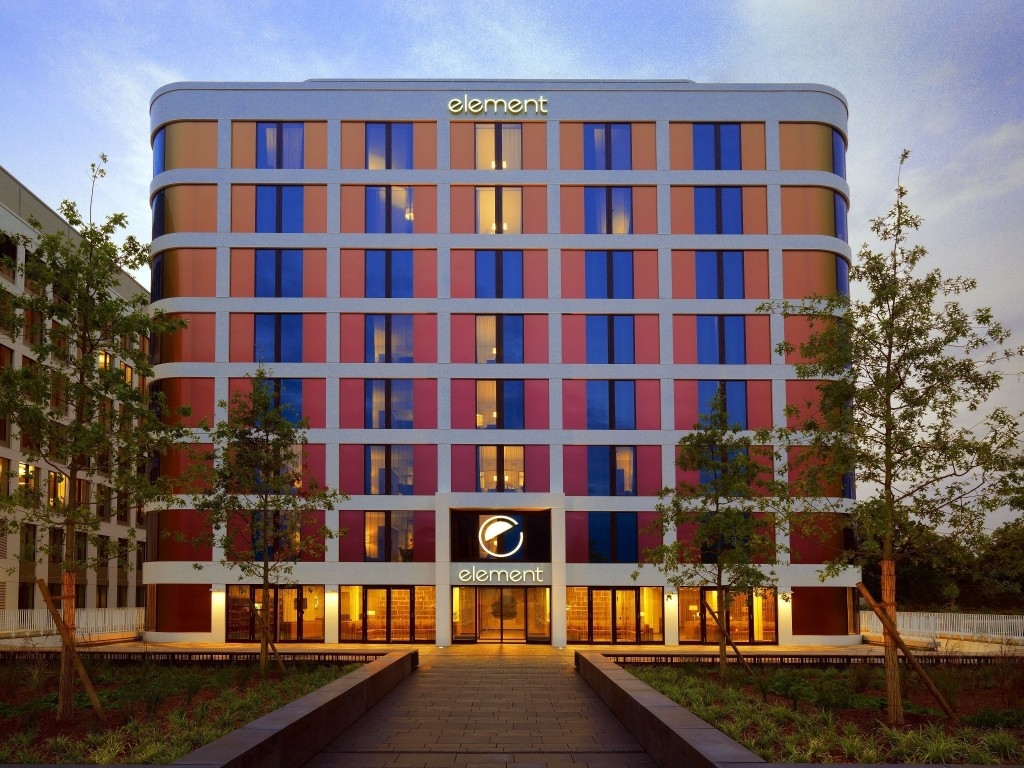 The Element Frankfurt Airport Hotel is inside the business district Gateway Gardens close to the airport. There are local buses and a hotel shuttle bus that take you from the terminal to the hotel.

I took a local bus from Terminal 1 to Gateway Gardens Mitte as advised on the hotel website.  Whilst writing this review, however I looked at the website again to check the bus number and the only option mentioned now is the hotel shuttle bus.  Alternatively, Google Maps told me to walk for 20 minutes.  Before I give any wrong information due to construction works or similar, I suggest taking a taxi or the hotel shuttle bus which runs every 30 minutes and costs €4 per person.

There was only one receptionist working when I got to the hotel and  I had to wait a few minutes until I could check in. To be fair, this was not due to her being slow but rather because she helped the person in front of me solving an issue from a previous stay.

When I finally got to check in she refused to speak German to me for no obvious reason.  I found this a bit funny but as I was tired I didn’t say anything and was just happy to get my key card so I could go to sleep. 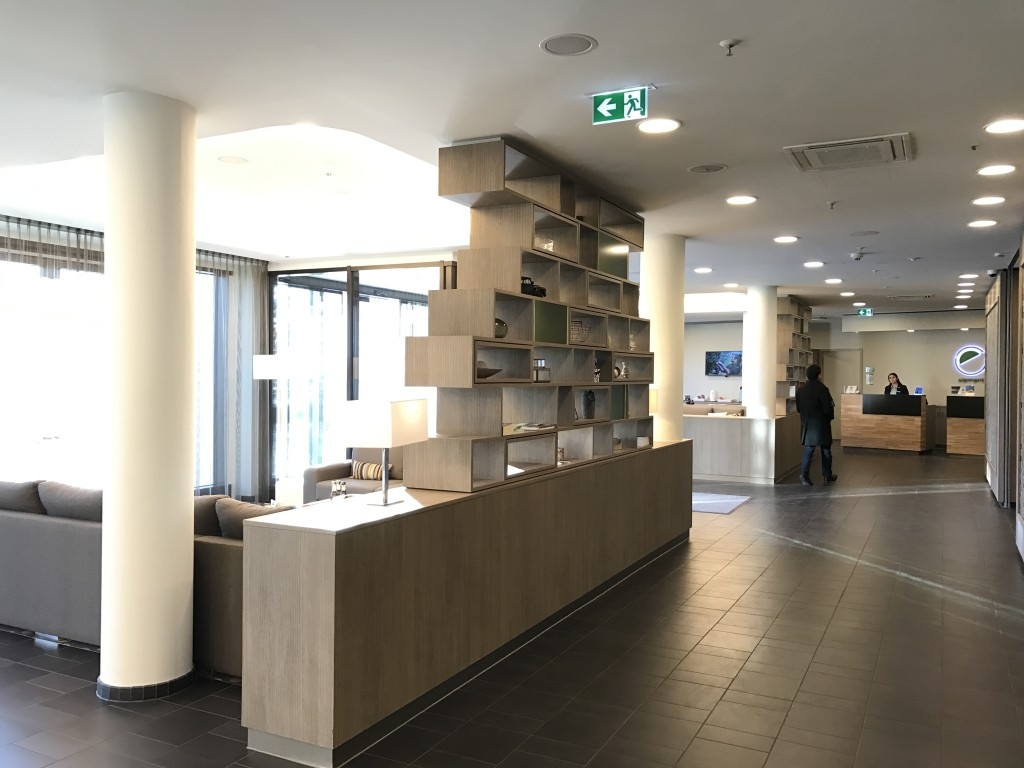 I stayed in a Studio, the standard room at the Element Frankfurt Airport.

All Element hotels are designed around the needs of long stay guests, although they are happy for you to book in for just a night – and, as an airport hotel, it is questionable how many people would want to stay more than one night anyway.

As you came into the room there was a kitchen to your right. The bedroom was around the corner so you couldn’t see the kitchen from the bed, which is the case in some of the rooms at the Element Amsterdam. 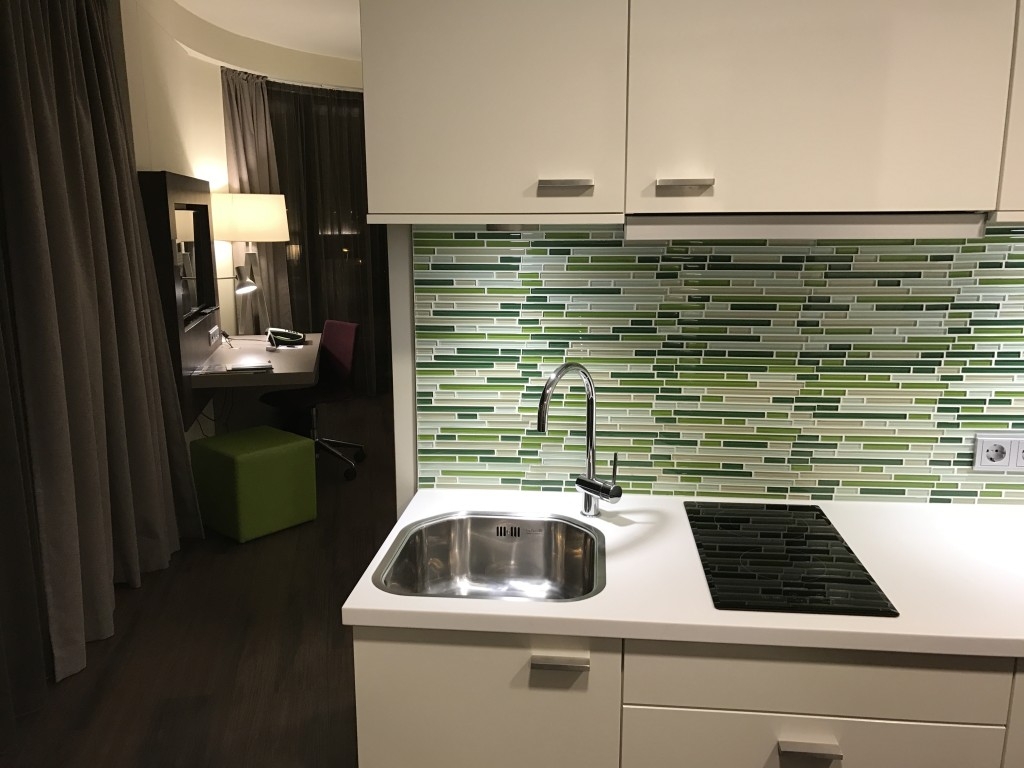 The TV was opposite the bed above the desk. The desk had European and USB plug sockets as well as a telephone guests can use for free phone calls to landline numbers in 18 countries including Canada, China, Ireland, UK and USA. This is very useful when your phone plan doesn’t include roaming. 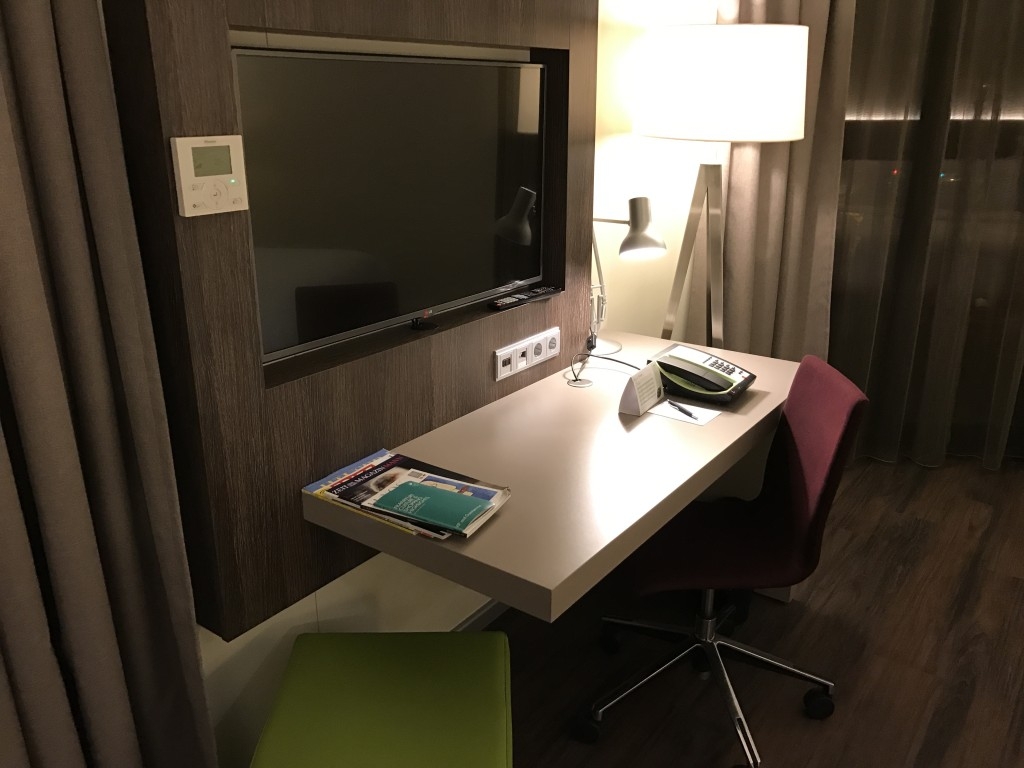 The picture looks a bit dark as I arrived in the evening, but during the day the room was nice and bright thanks to floor to ceiling windows.

There was a Nespresso machine with three capsules and further capsules can be purchased at the reception. 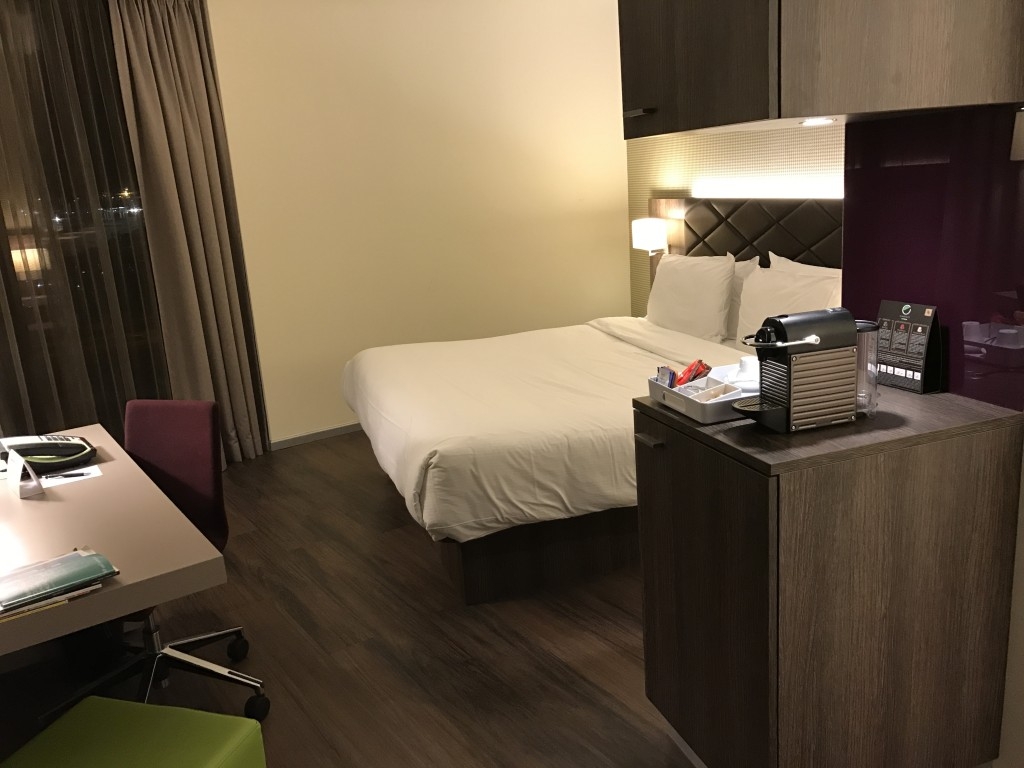 The bathroom was quite small, but the shower was spacious with a rainfall and a shower head and had good water pressure.

The shampoo and conditioner was attached to the wall. It wasn’t branded except for the Element logo. The bottles at the Element Amsterdam were by Pharmacopia and judging by my hair it must have been the same brand. 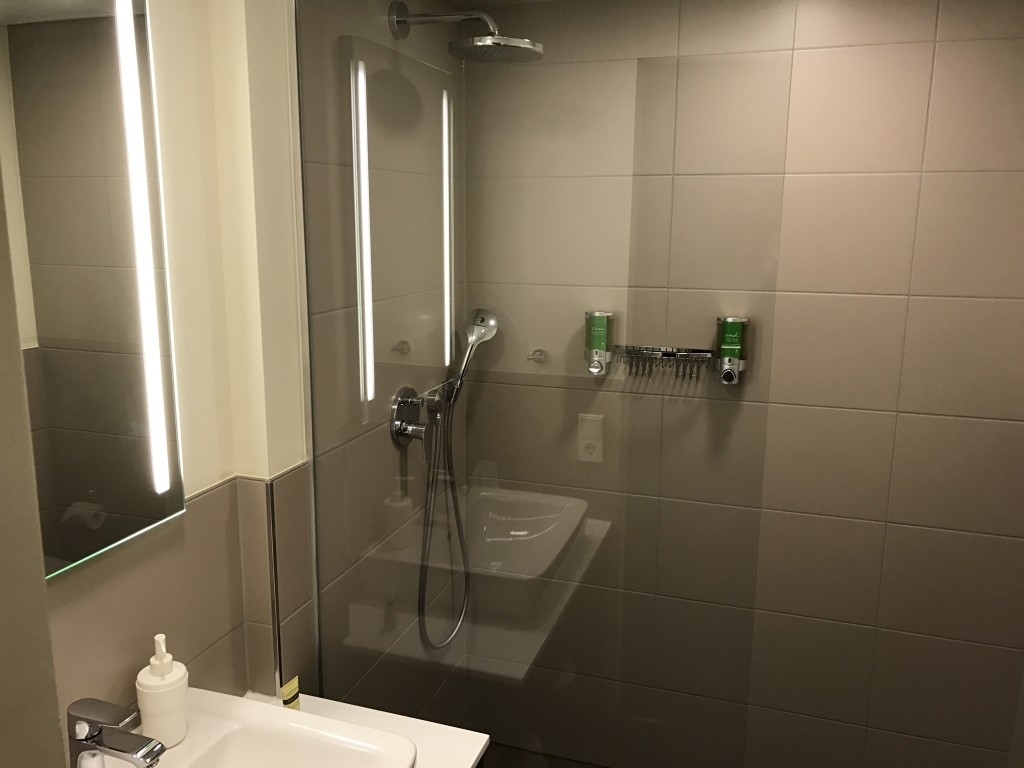 The wardrobe was quite small and only had a couple of hangers. With the ironing board and the iron also inside the wardrobe space to hang your clothes was limited. 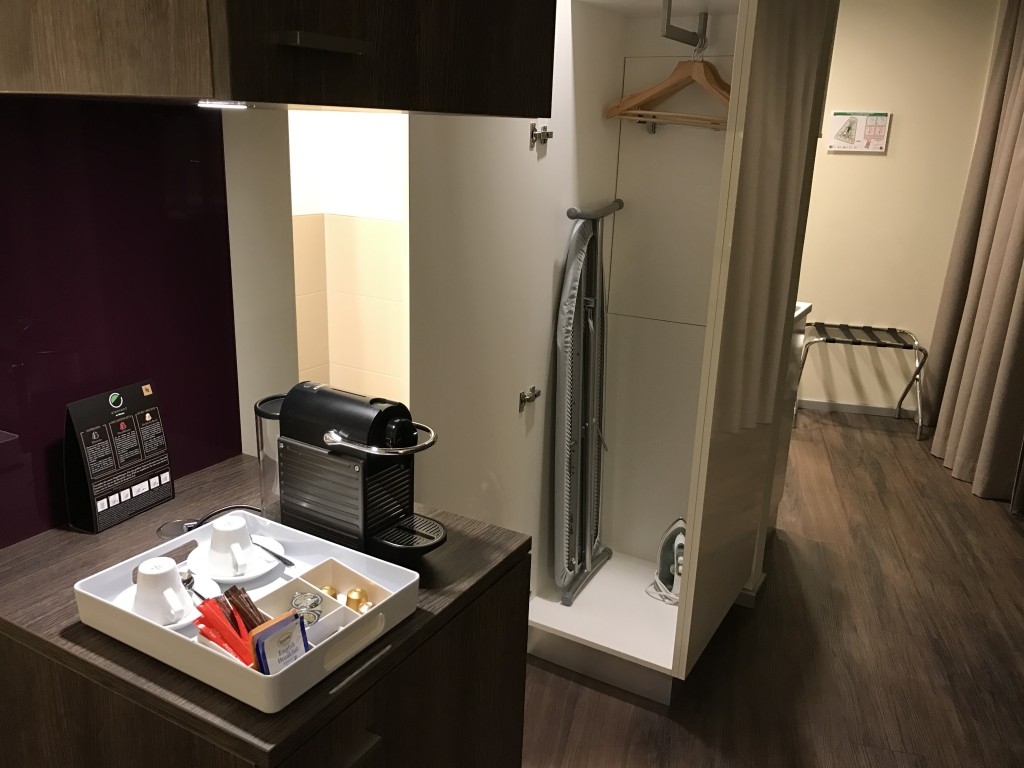 The picture below is of one of the suites where the bedroom is separate from the open plan kitchen: 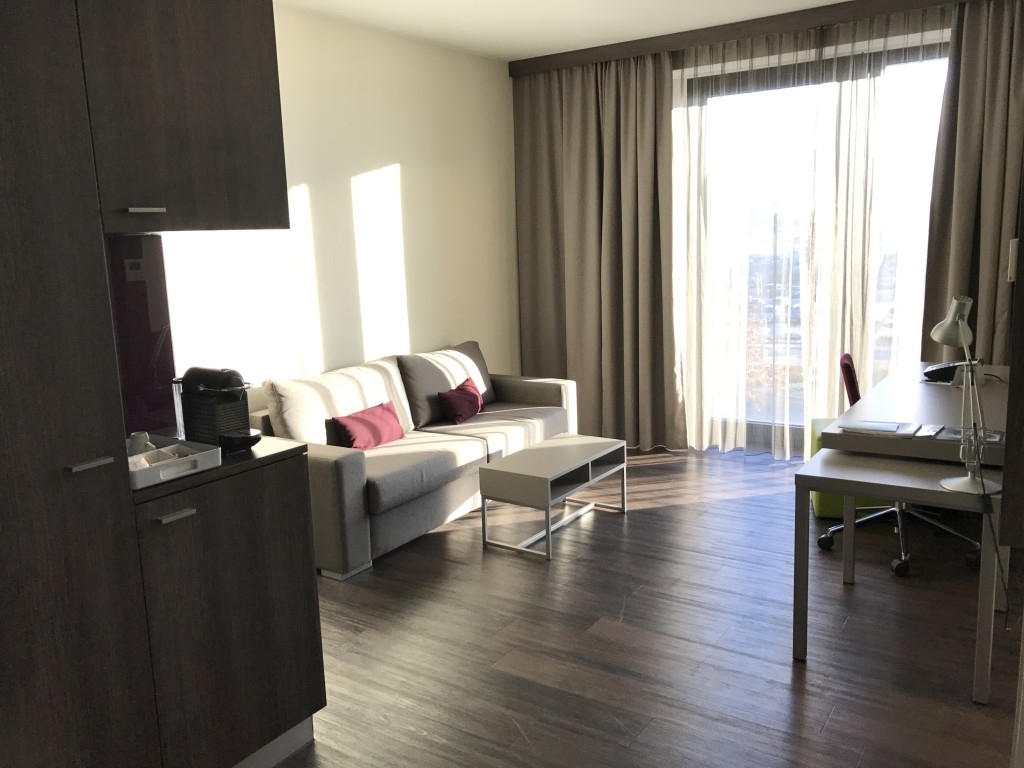 The ground floor has lots of public space including this sofa area with a book shelf and magazines. 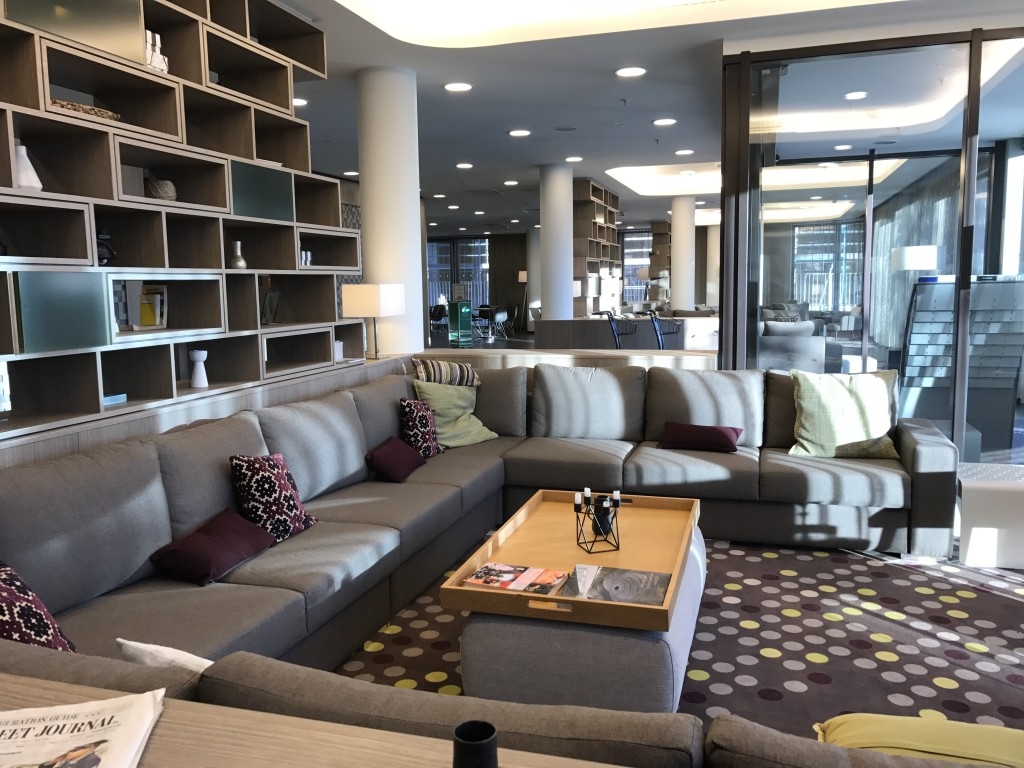 Next to the sitting area is a coffee bar where you can get complimentary coffee all day.

At the wall is a small shop where you can buy bits and pieces to whip up a meal in your kitchen. 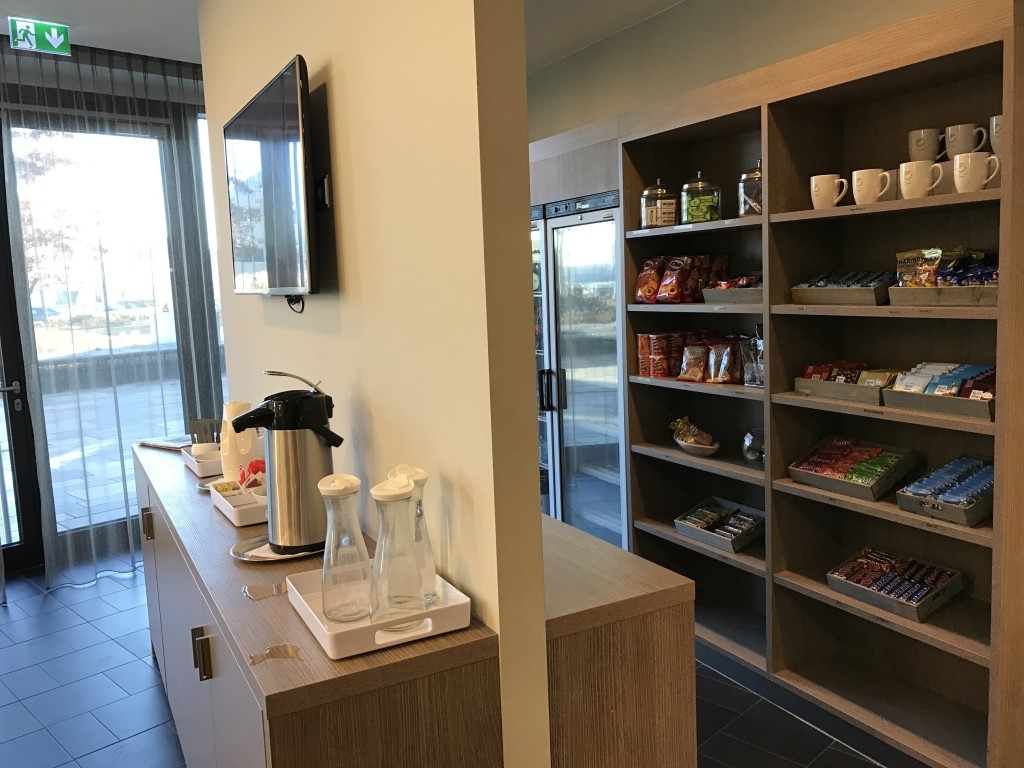 Breakfast was a continental buffet with cheese, cold cuts, cereals and yoghurt and full English breakfast. 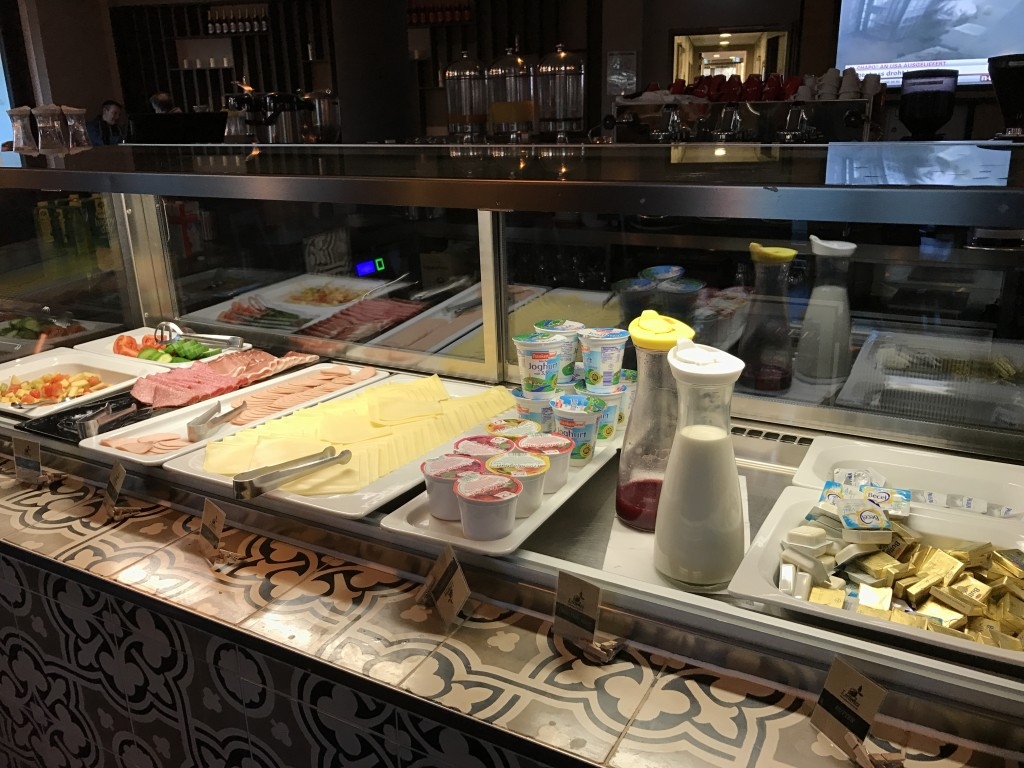 The bread, rolls and pastries selection was great – obviously, as the hotel is in Germany! 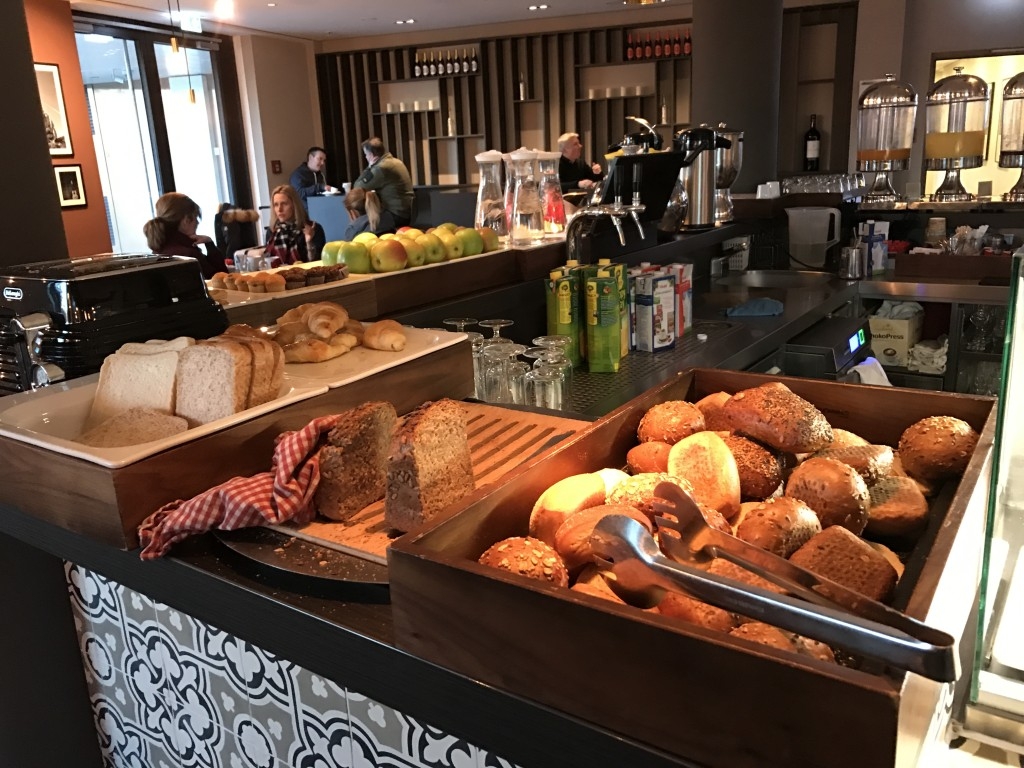 The tables were arranged around the kitchen island which held the breakfast buffet. 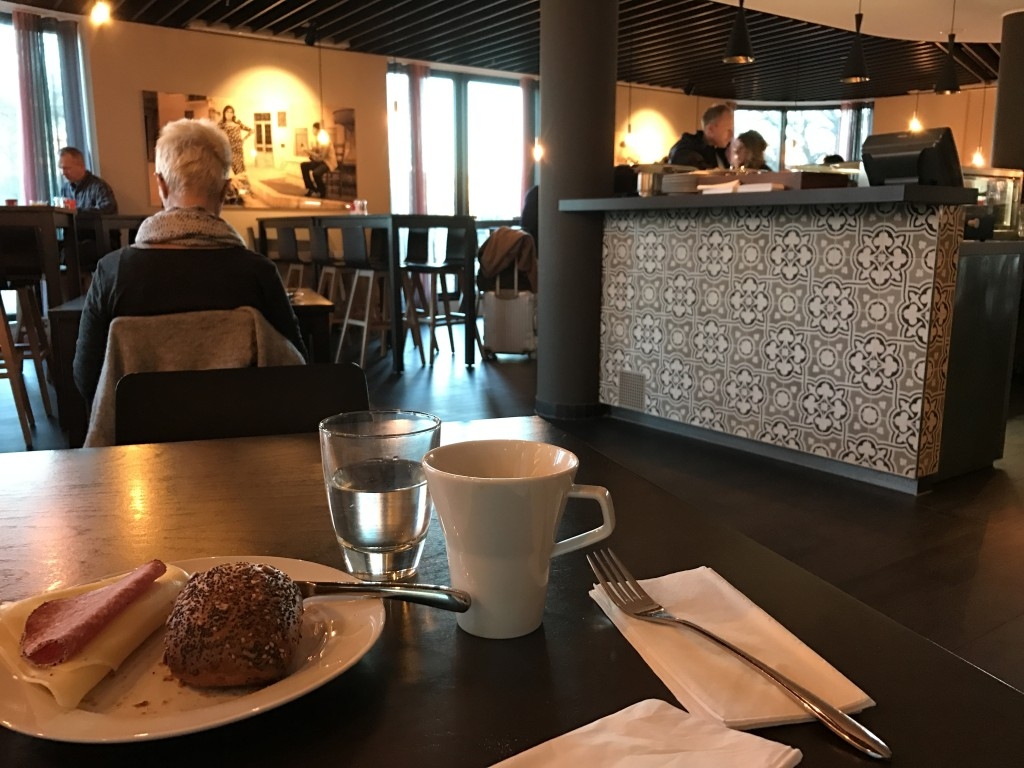 I remember seeing comments under previous reviews asking us to mention parking. As I don’t drive (I mean I can drive, I just don’t do it) I never thought about it much.  However, when I took my tour of the Element Frankfurt Airport and was told they had a garage, I thought I might as well take a picture and ask for the rates. I’m not going to list them all but 1 hour costs €3, 11-24 hours €24, 7 days €105 and 14 days €168. You can also leave your car at the hotel whilst travelling and collect it on your return. 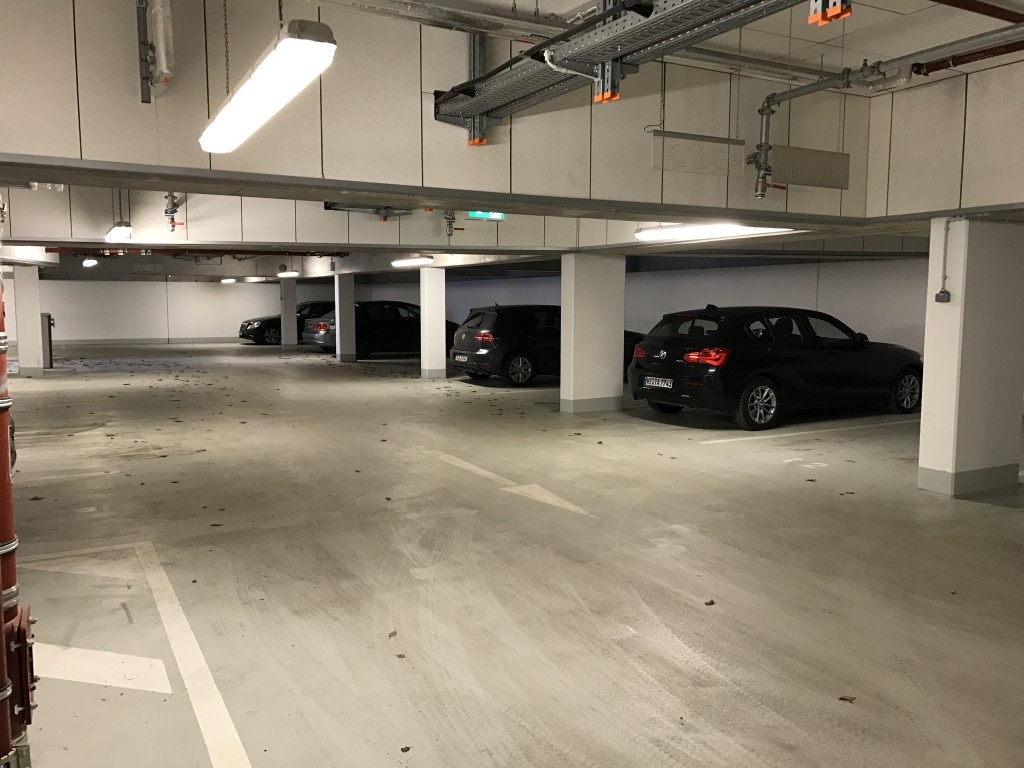 The gym was quite small but seemed ok for a workout – I was still feeling under the weather and decided not to use the gym. 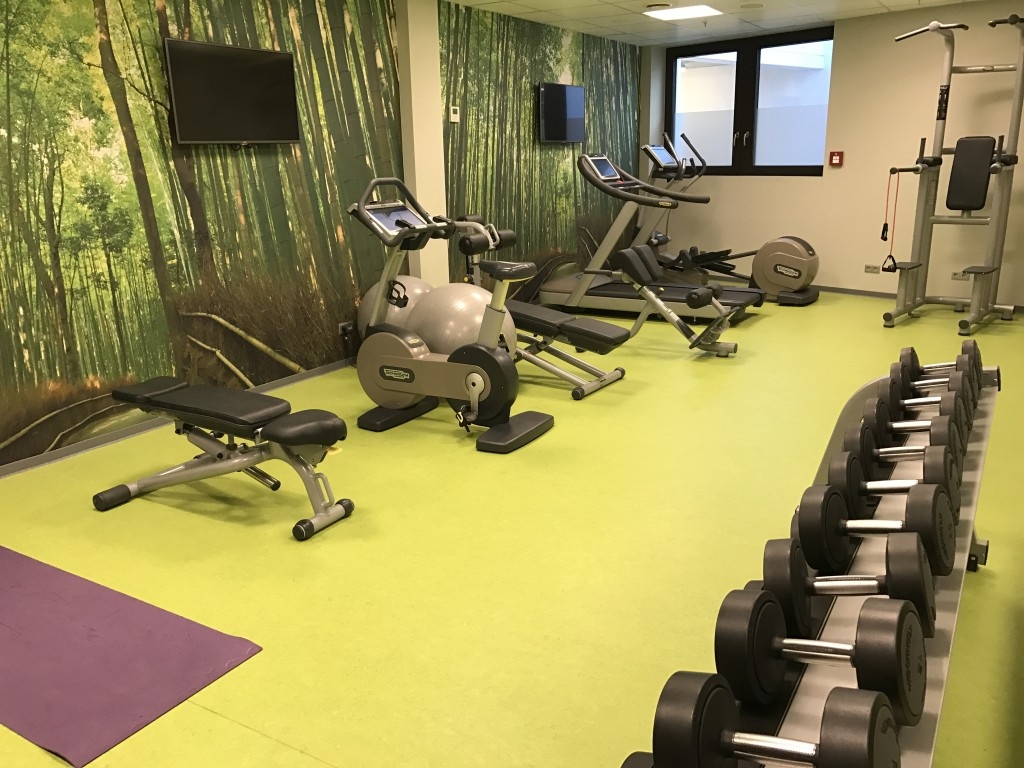 Like the Element in Amsterdam there was a laundry room with washing machines and dryers. However if guests prefer they can also use the hotel’s laundry service. 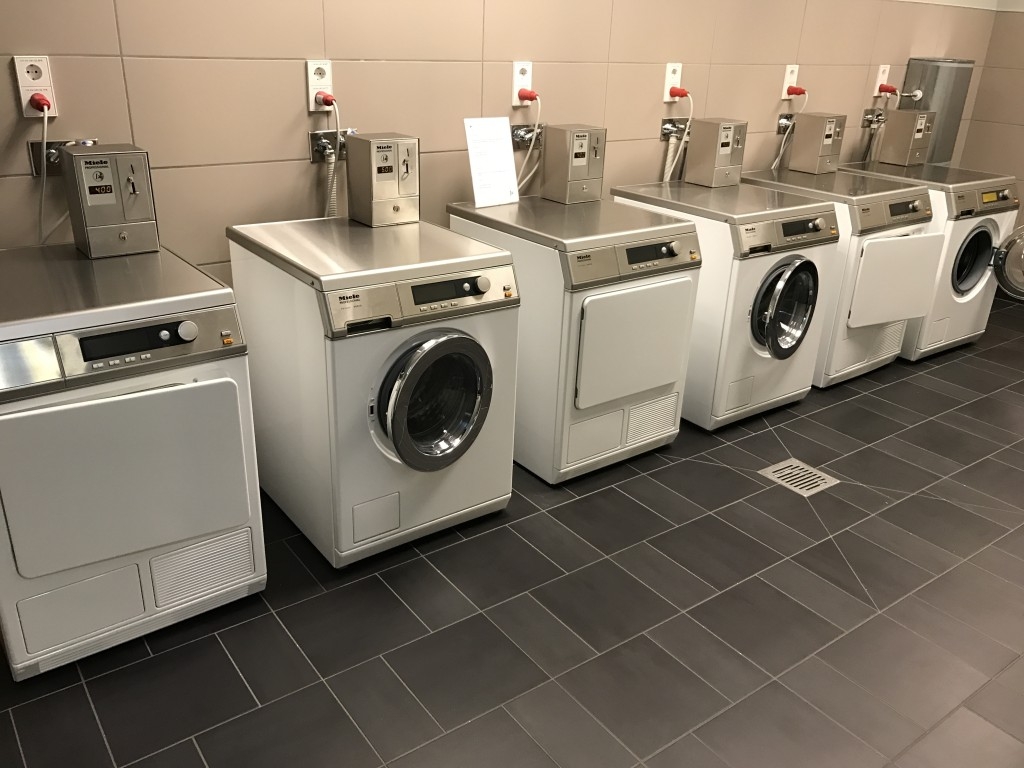 The Element Frankfurt has two meeting rooms which can be combined to one larger room. The area outside the meeting rooms has a number of tables and chairs where drinks and snacks are served for hotel guests in the evening. 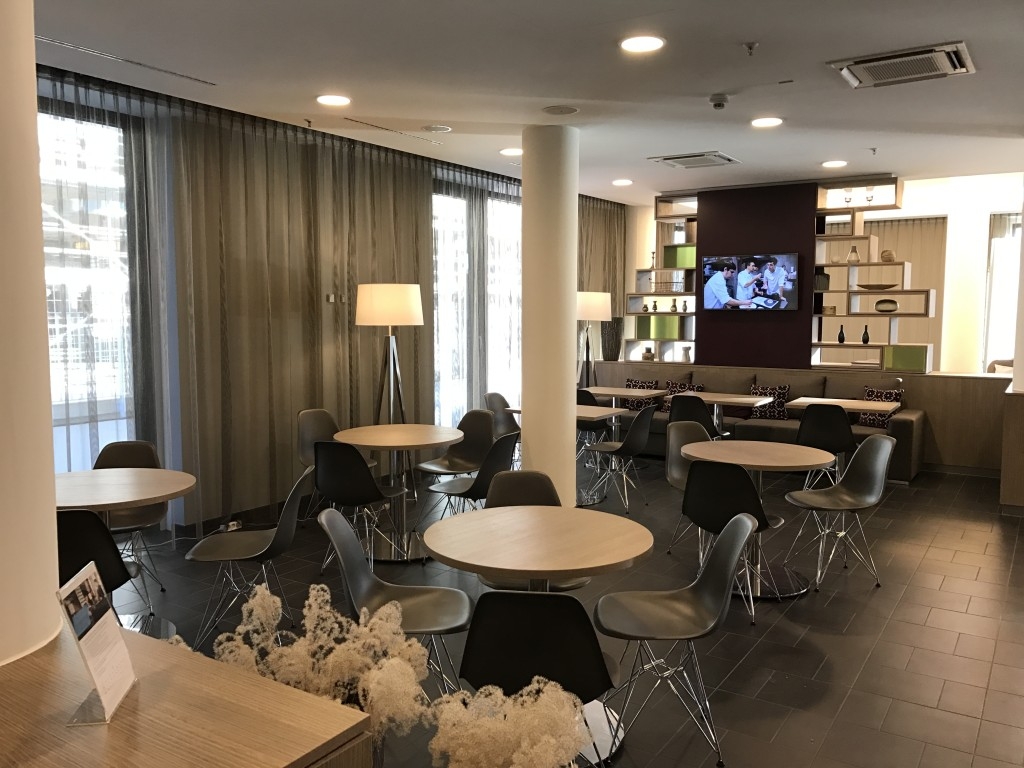 To give you a better impression, here is a short YouTube video of my room at the Element Frankfurt Airport (you can subscribe to our YouTube channel via this page – this is the same link to visit if the video does not appear below).

Is Element Frankfurt Airport worth it?

Rob has previously reviewed the Sheraton at Frankfurt Airport, which is also run by Starwood.  That review is four years old but he returned last year and tells me that nothing has changed.  It is directly connected to the terminal but is very dated and can be expensive.

There is also a Hilton and a Hilton Garden Inn connected to Terminal 1.  With no shortage of hotels onsite, you need a good excuse to stay elsewhere.  Being a new property with large rooms and a good breakfast, the Element Frankfurt is still worth considering despite the need for the shuttle bus ride.  Work out the price gap between the Element and the airport hotels and see what works best for you.

As a Starwood Preferred Guest redemption, the hotels costs 7,000 SPG points per night.  With cash rates as low as €85 at weekends this is not a good use of points, using Rob’s target valuation of 1.5p.  You may get good value on peak dates around major trade fairs and events.

The Element Frankfurt Airport website is here if you want more information or to book.

[CONFIRMED] IHG Rewards is relaunching in March with new tiers – what will change?