If you read Head for Points on a regular basis you will know that British Airways is gearing up for the roll-out of wi-fi on its long-haul fleet very soon.  It is also coming to short-haul but with a different system.

What most people don’t know is that the system is already installed on many long-haul BA planes.  BA is not turning it on at the moment, presumably because it wants the majority of the fleet to be ready on Day 1.  Making a big song and dance about it, only for passengers to find out that they only have a small chance of being on a suitable plane, would be another PR mess.

The BA long-haul wi-fi should be pretty good.  By holding back for a few years, it is now able to use ‘next generation’ technology which should allow connection speeds substantially better than you have experienced on other carriers.

To make sure that the system is running smoothly when installed, British Airways is currently testing wi-fi on random long-haul services.  There is no way of knowing that you are on one until the cabin crew announces it.

Here is a map showing roughly where in the world the service will be accessible: 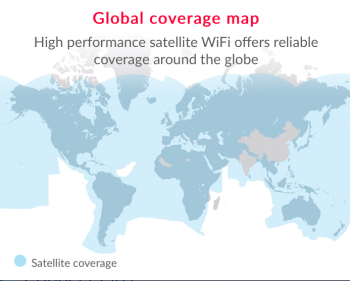 What will it cost?

Quite a lot.  In fact, more than I expected.

There are two levels of service.   If you want to stream video or do anything else which requires a lot of bandwidth, you will need to dig deep.  Here are the prices for ‘Connect Plus’ as BA calls it:

Peak download speeds are stated as 20 Mbps with a peak upload speed of 2 Mbps.  On average users are told to expect between 25% and 50% of this speed.

Given typical UK residential speeds for anyone not on cable broadband this won’t be much worse than being at home.  A quick test on our Virgin Media cabled broadband wi-fi gave me 50+ Mbps but our backup Relish system, which works over the mobile spectrum, was only running at 5 Mbps. 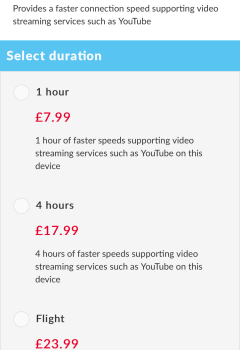 If you want to do simple browsing, such as e-mail, it is cheaper – but still far from a bargain: 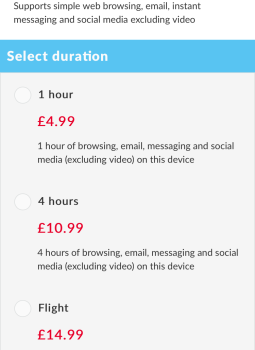 The reason I am surprised by the pricing is that in-flight wi-fi is usually priced highly to artificially limit demand.  You can only get a decent speed if the majority of passengers do not try to use it.

Theoretically, the British Airways system can support more users at higher speeds than we have seen before.  BA does not need to price it at a level which will put off 90% of passengers, but it seems they are.

It appears, based on the trials, that all passengers have to pay irrespective of travel class.  (This is fairly normal –  I had to pay whilst in Etihad First Class recently.)

Notwithstanding the pricing, this is an important development for British Airways and one which I hope succeeds.  For every passenger who refuses to fly BA due to the seating or food quality, there is probably another who refuses purely on the basis that they cannot work in the air.