This is our review of the new Hampton by Hilton Alexanderplatz hotel in Berlin.

A few weeks ago a new Hampton by Hilton opened right next to Berlin’s Alexanderplatz. Hilton asked me to take a look at this new property and gave me two complimentary nights.  As always HfP paid for my flights and I paid for my drinks at the bar.  Here is my review.

It was my second stay at a Hampton by Hilton after having stayed at Gatwick North a year ago. You can read that review here.  Airport hotels are rarely fully representative of a brand, however, so I was interested to visit a city centre Hampton. 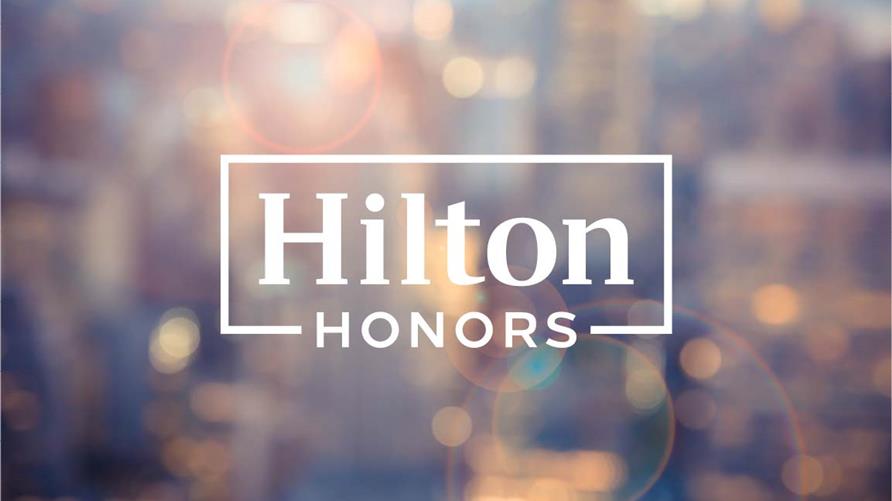 Where is Hampton by Hilton Alexanderplatz?

There are two Hampton by Hilton hotels in Berlin, with the other older one in the west near KaDeWe.  This new Hampton by Hilton is literally 5 minutes from Alexanderplatz with lots of shops, the shopping centre Alexa and the train station. There are also three tram lines outside the hotel, however, due to the traffic lights it can take up to 5 minutes to walk to the stop!

A taxi to/from Berlin Hauptbahnhof takes about 15 minutes and costs around €12.  The taxi from Tegel airport was €35. I think it took us 45 minutes to get to the hotel, but we were stuck in quite a lot of traffic. According to Google Maps it should have taken half an hour.

I was travelling with my boyfriend and one of his friends who had booked himself into the same hotel.

At check in we asked to have rooms on the same floor, which wasn’t a problem. The reception staff were friendly and they spoke good English. 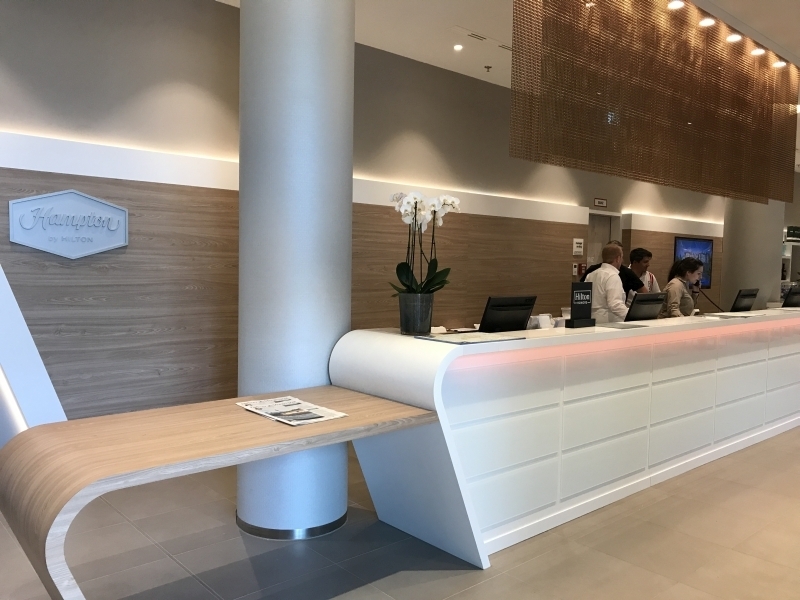 The Hampton by Hilton Alexanderplatz has got 344 rooms with 112 standard rooms, 111 flex rooms with a sofabed, 81 twin rooms and 40 accessible rooms. 16 rooms are interconnecting.

We stayed in a standard room with, allegedly, a garden view.  As the area around the hotel is still undergoing some construction work, the garden doesn’t exist just yet, so don’t book one of these expecting to see much. 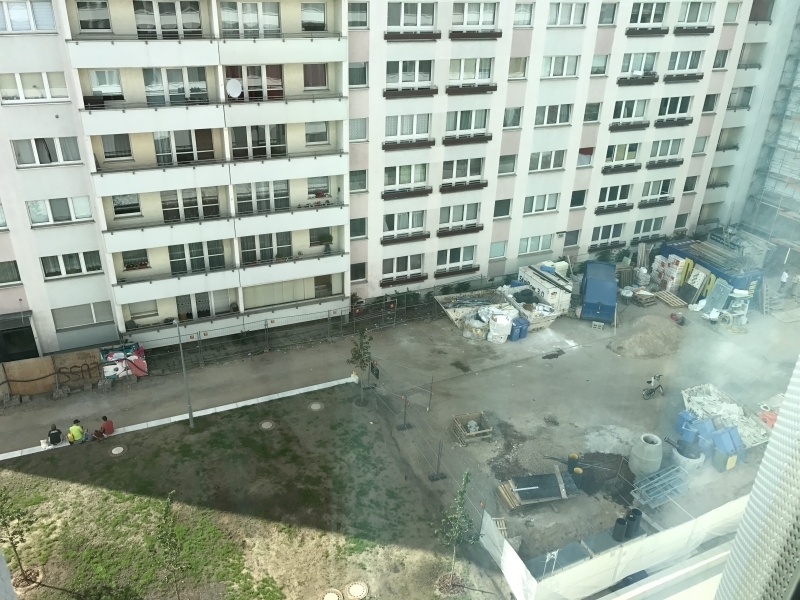 The room was very bright thanks to floor to ceiling windows and had great blackout curtains.

There was a good sized desk with a desk chair and a small armchair.  The room was a decent size for a city hotel, but I did trip over my suitcases on the floor a couple of times.

Underneath the TV (German, English and Spanish channels) was a tea / coffee station with a kettle, tea bags, instant coffee and UHT milk portions.

Wifi was complimentary and fast enough to stream videos. 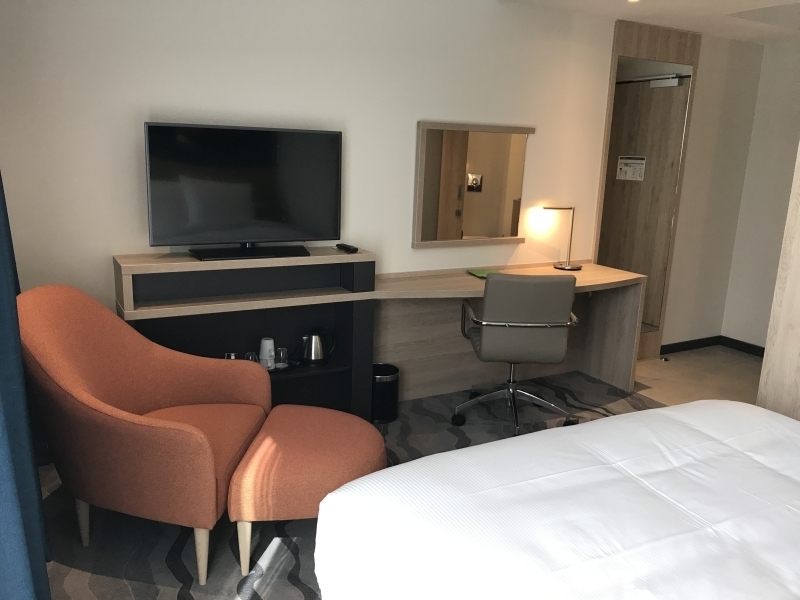 Inside the wardrobe was a suitcase stand, a hair dryer, four hangers and the laundry bag if laundry service was needed.

There was also an ironing board and iron. 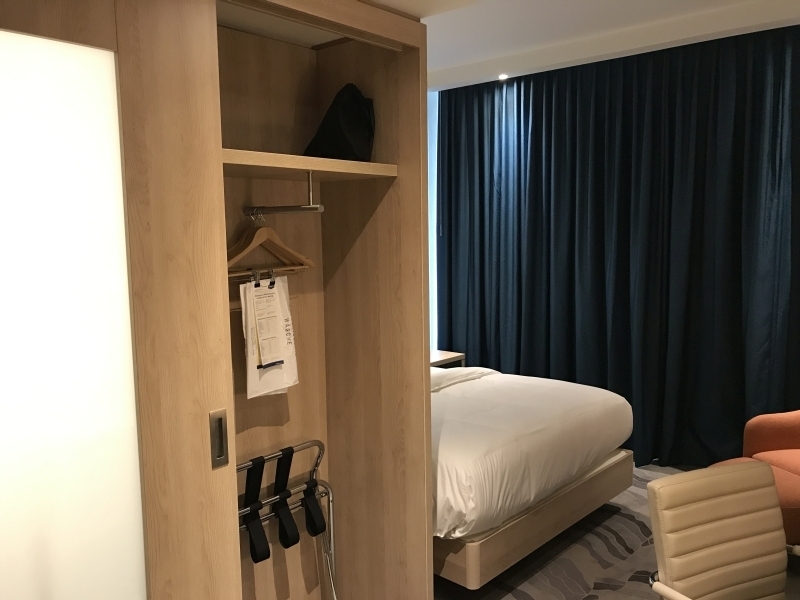 On one side of the bed was a small shelf and on the other side a nightstand with two drawers and a safe in the upper flap. Next to the headboard were reading lamps and EU sockets.

The room had airconditioning which luckily worked well as Berlin was very hot the two days we were there. 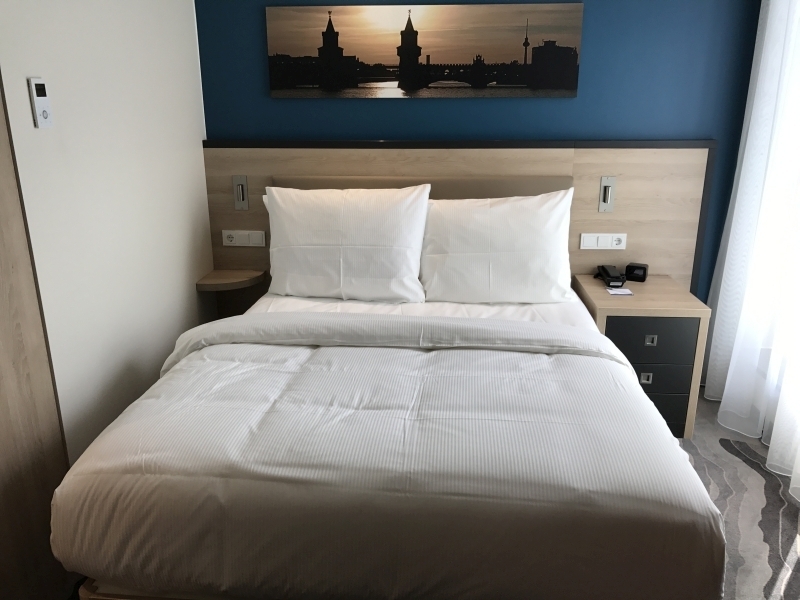 The bathroom was quite small and didn’t have a lot of space for make up and toiletries. There was one rail to keep a small towel and hooks on the wall for bigger ones. Handwash and body lotion were mounted to the wall.

The shower had a decent shower head with good water pressure. Hampton Spa Therapy amenities were fixed to the wall. I liked the smell of them and my hair was soft and shiny after using shampoo and conditioner.

The shower’s glass wall was only covering half the length of the shower base. This gave additional space.  However the slightly bend glass wall didn’t fully stop the water from flowing into the rest of the bathroom and the small towel on the floor was soaking wet after each shower. 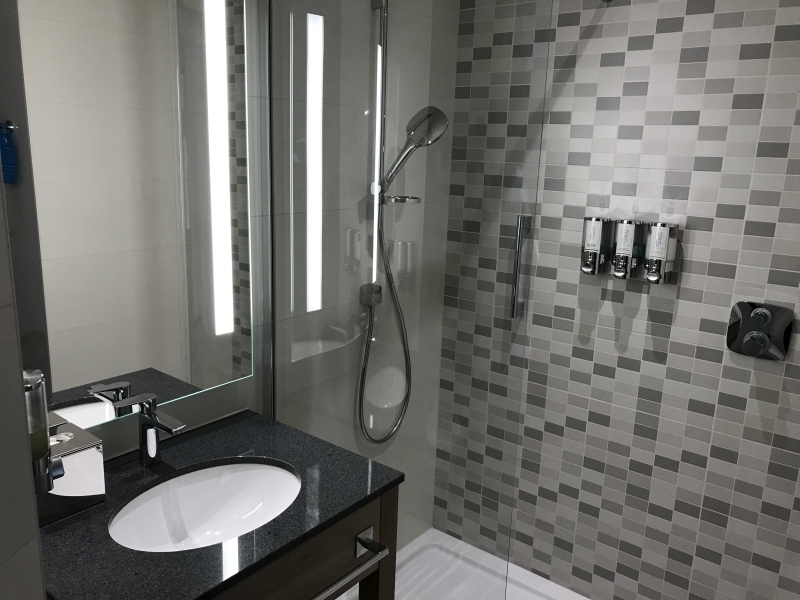 This is a photo of one of the Flex rooms which have an additional sofabed and can occupy up to three people. They are slightly bigger than the Standard rooms. 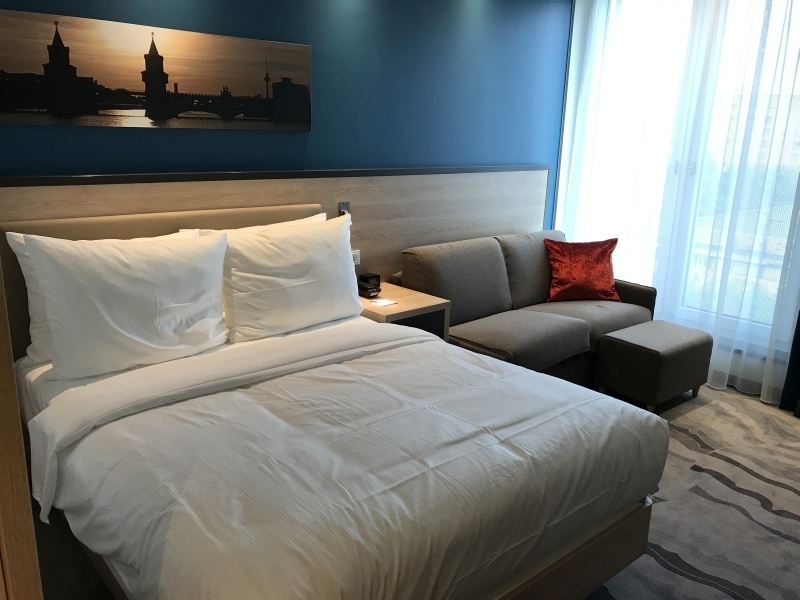 The breakfast room was on the ground floor to the right of the reception. As with all Hampton properties breakfast was included in the room price.  It’s served 6am – 10am Monday – Friday and 6am – 11am Saturday and Sunday.

There was a large selection of (good German) bread and rolls, cold cuts, cheese and fruits as well as a waffle making station. It’s worth noting that the coffee was very good. 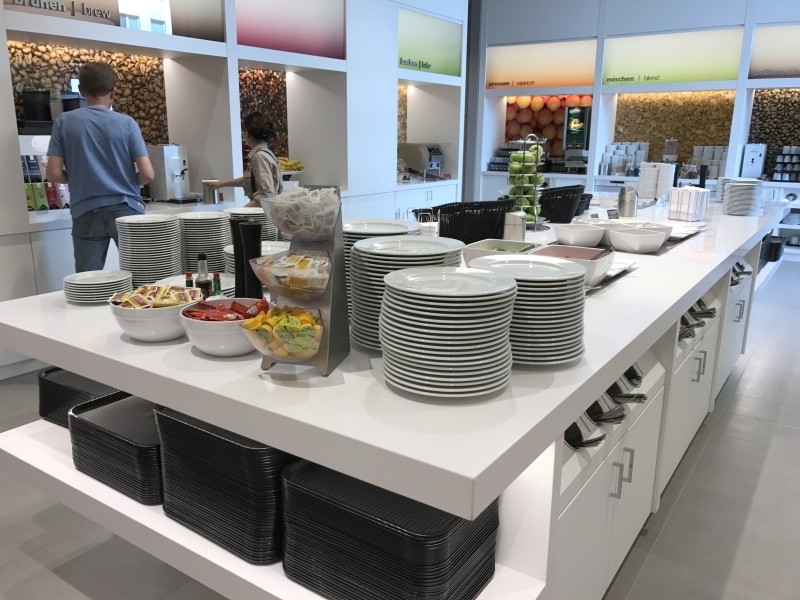 There was also a good selection of hot food. 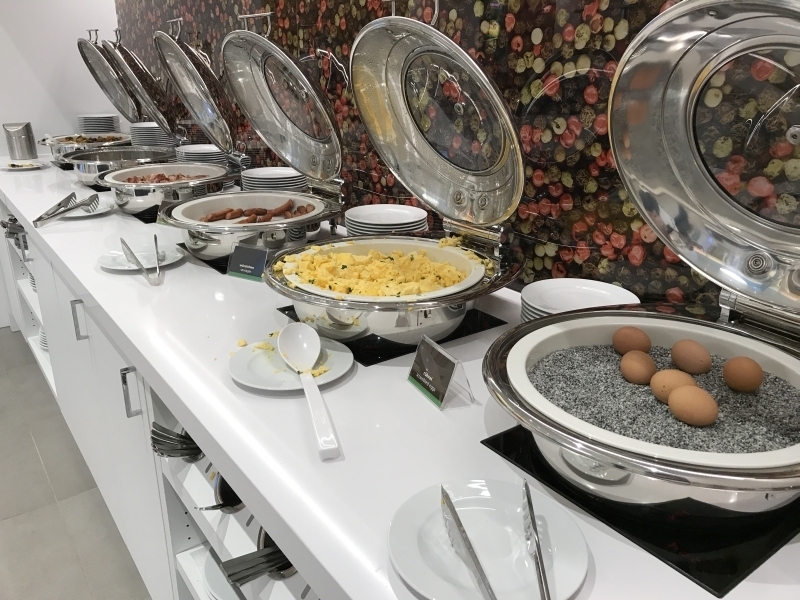 The only downside at breakfast was the size of the water/juice glasses. 0.1l is definitely not enough liquid in the morning and we ended up with this little wall of used glasses on our table …… 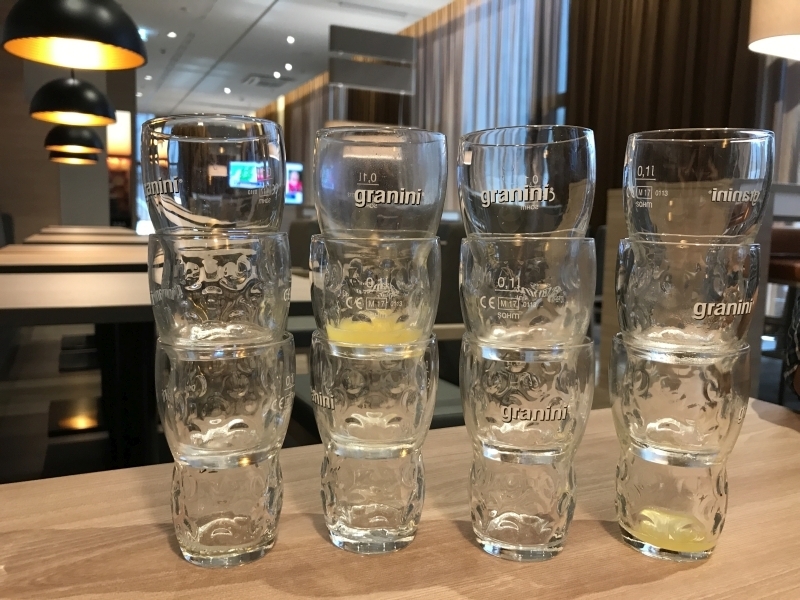 There was a surprisingly large amount of sitting areas on the ground floor of the hotel.

I took this photo late in the evening, but during the day this area was full with people. 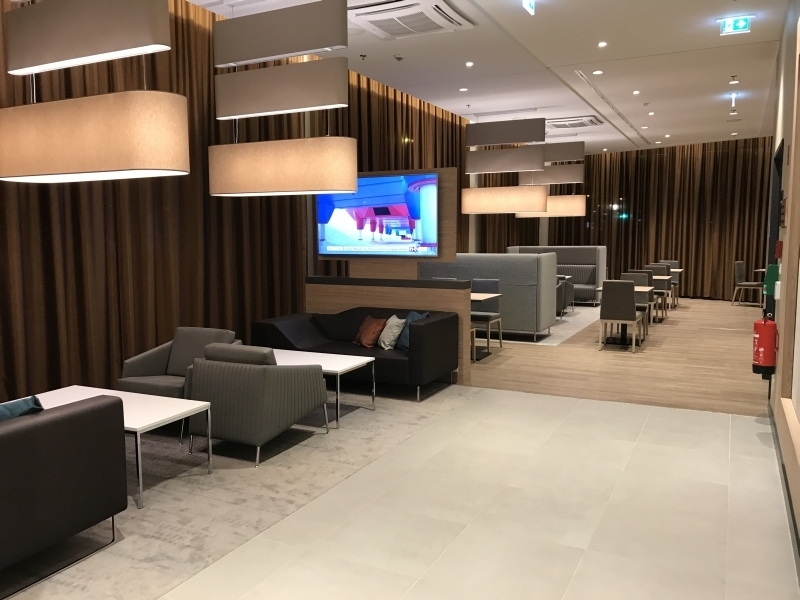 The business centre is to the right of the sitting area in the photo above. There were three computers and a large table for meetings. Note that this space is open and can get a bit noisy during busier times. 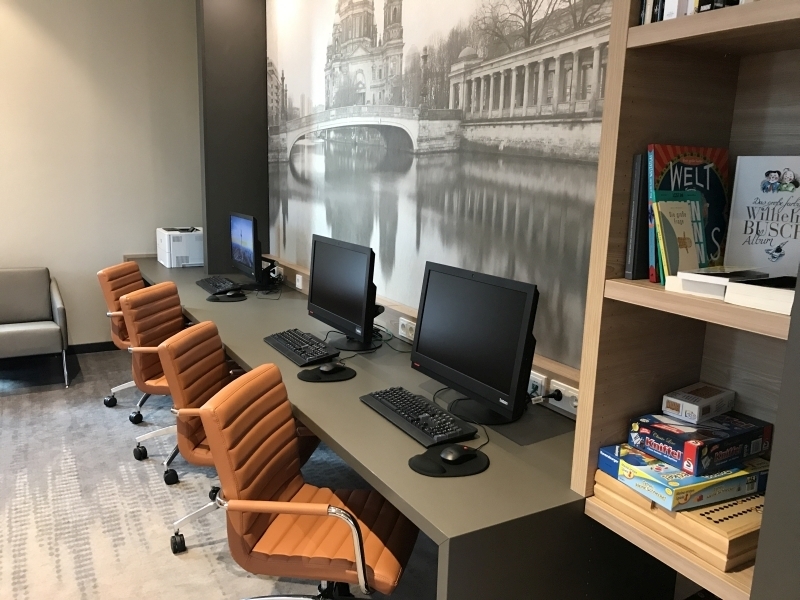 The rooms don’t have mini bars, but the hotel bar which is an extension of the reception is open 24/7.  As well as drinks and snacks you can also buy toiletries if you’ve left something at home. 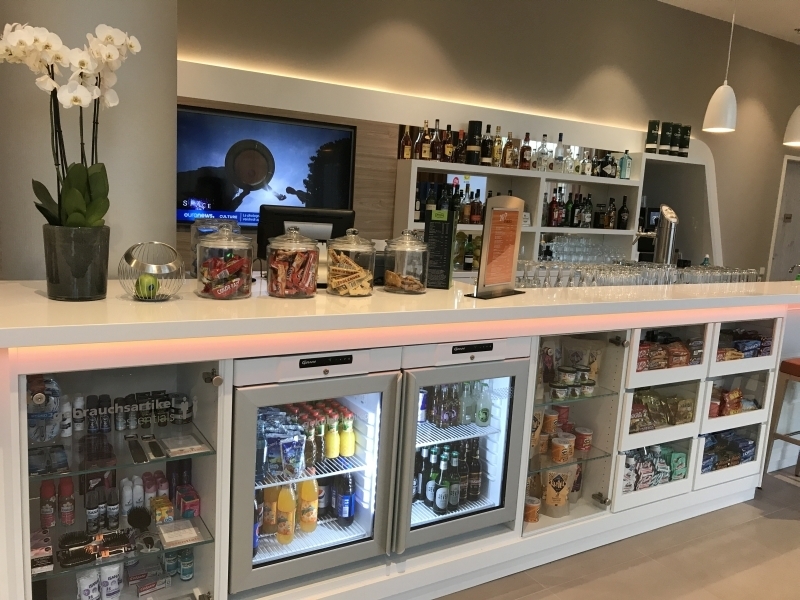 I didn’t use the gym, but was impressed by the amount of machines and how spacious it was. 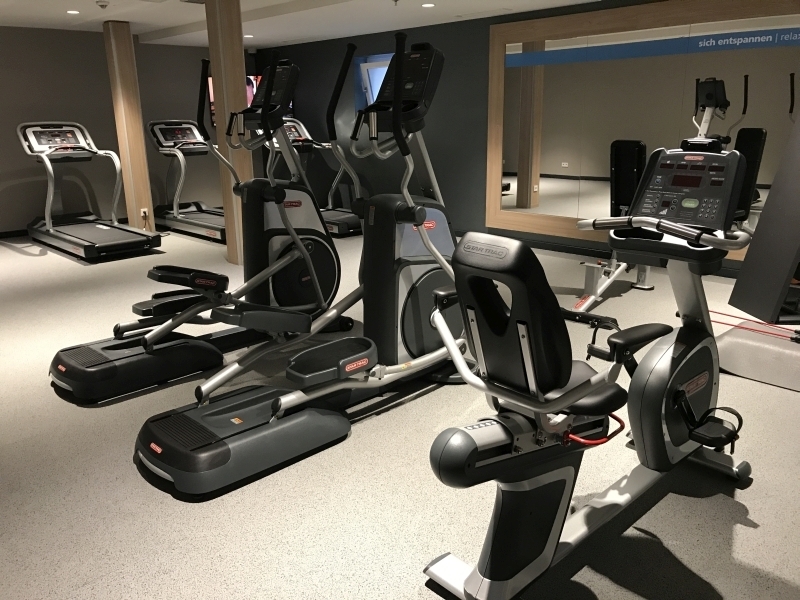 Those who drive might find it handy that the Hampton has it’s own garage with 27 parking spaces.  These cost €26 per day. Unfortunately you cannot reserve them and the hotel operates a first come first serve basis. 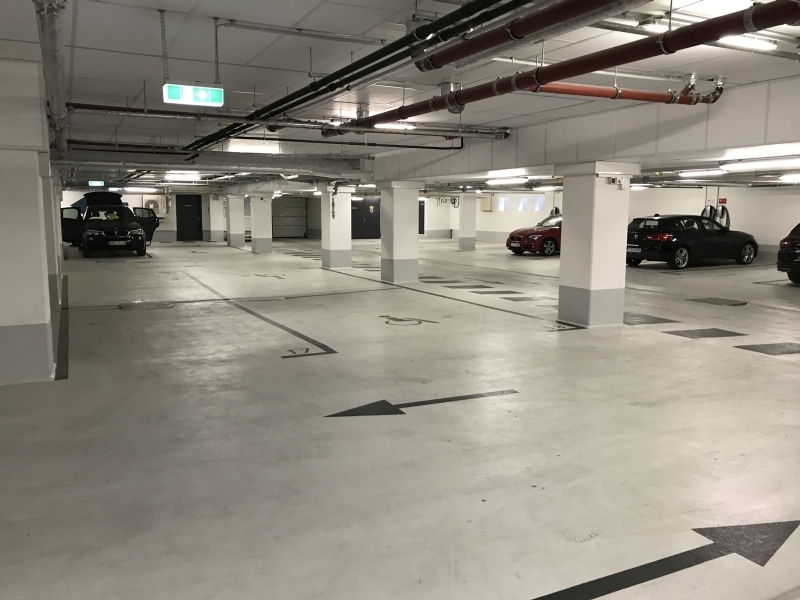 My favourite part of this Berlin trip was the bike tour we did on the second day. We hired bikes at the reception for €12 per bike per day. As my brother lives in Berlin we had a ‘tour guide’, but the maps they have at reception are great to help you get around. It’s roughly 12 minutes to Brandenburger Tor, another two minutes to the Reichstag and then another 5 to the Siegessaeule.

I also recommend cycling to the former airport Tempelhof (pictured below) which takes around 30 minutes from the hotel. Here is an interesting Guardian article about Tempelhof and how it has been spared from redevelopment. 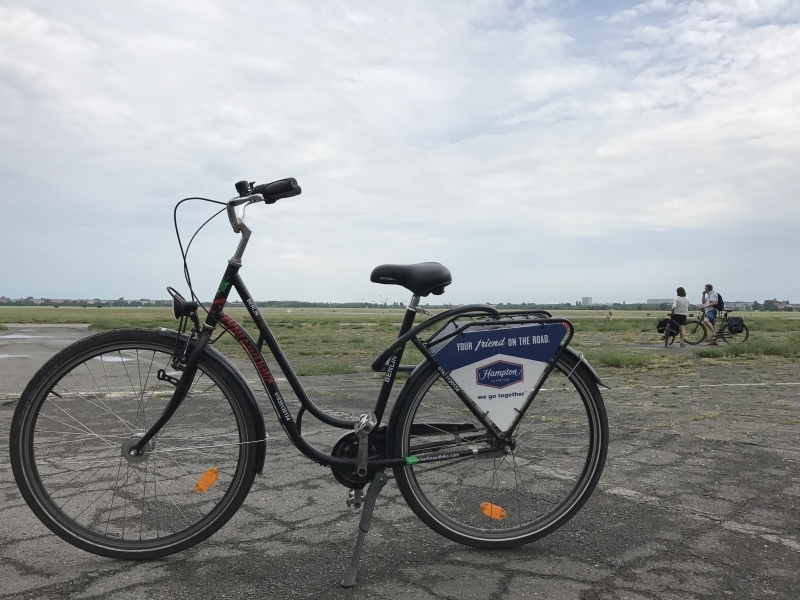 To give you a better impression of what you can expect, here is a short YouTube video of the Hampton by Hilton Alexanderplatz. You can subscribe to our YouTube channel via this page – this is the same link to visit if the video does not automatically appear below.

The Hampton by Hilton Alexanderplatz is a great new city hotel with a good free breakfast and easy access to the sights of Berlin.  If you compare the quality of what you get with the modest price then I doubt you can go wrong.  You can even get 2,000 Avios points on each of your Hilton stays, including Hampton, this Summer.

As a Hilton Honors redemption you are looking at 25,000 – 50,000 points per night depending on the cash price that day. This works out at roughly 0.34p per point which is what we expect to see.  If you are paying cash, I found that you can get a standard room from as little as €81 during August.

It’s worth noting that there is a Holiday Inn, ibis Budget and Mercure pretty much next door to the Hampton.  They all cost roughly the same but only the Hampton by Hilton offers free breakfast and of course the Hampton benefits from being brand new.

You can book and find out more on the Hilton website here.