10 days ago I wrote about how Loganair and British Airways appeared to be playing a complex game of brinkmanship over a new codeshare agreement.

Loganair operates flights to the Highlands and Islands of Scotland, primarily from Glasgow, Inverness and Edinburgh.  It is probably best known for its service from Glasgow to Barra, where the plane lands on the beach and the flight times are adjusted to the tide table. 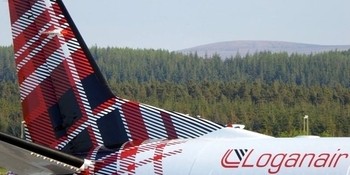 Loganair and Flybe are ending their franchise agreement on 1st September 2017.  From that date flights will operate under the Loganair brand.

When this news was first reported in November 2016, it was said that the British Airways codeshares would remain in place.   Then things went very quiet ….

Finally, BA and Loganair have announced a deal

With just two weeks to go – which means that the two airlines will already have lost out on some advance booking business – a new codeshare deal has been announced.

This is what will happen:

Loganair flights from Inverness, Aberdeen, Edinburgh and Glasgow to the Highlands and Islands will carry a British Airways flight number from 1st September

Loganair flights from Glasgow, Inverness and, erm, Norwich to Manchester will also carry a BA code

It is worth noting that you cannot book these flights on a stand-alone basis with a BA flight number.  They need to connect to another British Airways operated or coded flight.  If you try to book Edinburgh to Sumburgh on ba.com, it tries to sell you Edinburgh – Heathrow, Heathrow – Aberdeen, Aberdeen – Sumburgh!

As well as the obvious permutations, eg Heathrow to Inverness to Sumburgh, the codeshare should also allow routings such as New York JFK to Manchester (on AA, BA coded) to Norwich!

Unfortunately, you cannot redeem Avios on Loganair services, even those which have a British Airways flight number attached.

Flights are already available for booking at ba.com.

Which British Airways UK lounges are open, which are closed and which will never reopen?