This is my review of the new Hilton Bournemouth hotel.

I spent last weekend in Bournemouth playing golf with friends.  Part of the reason for choosing Bournemouth for our golf trip this year is that I wanted to take a look at the relatively new Hilton and Hampton by Hilton hotels.  When I offered to book all of our rooms on points, my friends were happy to go along with the idea!

We split ourselves across the two hotels.  A review of the Hampton will follow in a few days, once I have twisted the arm of the person who agreed to write it.  This person once spent 90 consecutive nights in a Marriott ‘Residence Inn’ so he knows his way around 3-star hotels.

You can find out more about Hilton Bournemouth on their website here.

The Hilton and Hampton by Hilton hotels are part of the same mixed use complex, which includes private apartments.  Some apartments are built into the Hilton and there is a separate lift inside the lobby.  They appear to come fully furnished, so if you like the look in the pictures below then you can literally buy it.

Whilst you might think of Bournemouth as a touristy seaside town, it actually has a lot of financial services activity to justify a ‘business’ hotel.  Big employers include JP Morgan, Nationwide Building Society and Liverpool Victoria.  It also has The Bournemouth International Centre, a major conference venue, which is literally 30 seconds walk from the Hilton.

The hotel is not aimed at the family holiday market.  There are no rooms with bunk beds or built-in kids beds, for example, and no rooms take more than two people.  On the night I was there, there were a lot of adult groups staying including a few stag / wedding parties.  I would expect that the cheaper Hampton next door attracts the boozier crowd however.

Bournemouth is a sprawling town with no real gap between Bournemouth, Christchurch and Boscombe.  The central location of the Hilton is a real benefit, as many hotels are further up into the town in converted Victorian buildings.  It is a 3 minute walk from the lobby to the pier and beach although very few rooms at the hotel have a view of the sea.

The picture below shows the Hilton, with the Hampton curling around the corner at the right. 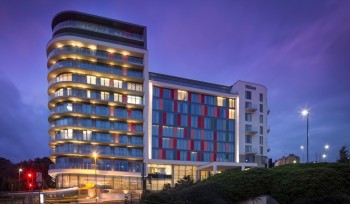 Hilton has really raised its game with its recent UK openings.  London Bankside was a sign of what it can do when it tries, and Bournemouth follows a similar pattern.  The hotel looks fantastic, basically.  They have even managed to make the corridors look attractive, using different fonts for the numbers on each room and lining the corridors with different shaped mirrors.

It is a real triumph of modern design.  I doubt the furnishings are substantially more expensive than usual but they are very well chosen and really give the place a lift.  Most are from Ted Baker, and there is an option to buy any of the cushions or bedding that takes your fancy.

If you are arriving by car, both hotels share a car park which is also open to the public.  The overnight rate for hotel guests is £11 per day midweek and £13 at weekends.

My room at Hilton Bournemouth

I was upgraded, as a Hilton Diamond, to a one-bedroom suite.   These sit on the ‘prow’ of the building (far left in the photo) and are the only rooms which actually face the sea – although, as I was on the second floor, I only got the tiniest glimpse.

Looking at the comments on my Instagram posts from the hotel, a suite is certainly not guaranteed as a Diamond at Hilton Bournemouth.  The fact that I was only there for one night, on a Saturday in October, would have worked in my favour.

There are big issues with some rooms at this hotel due to noise.  On the 8th floor is the Sky Bar, a very classy – and very expensive (£49.50 for four drinks, including service) – bar.  This causes disturbance at weekends.  The 7th floor is apparently the main one to be avoided.  There was no disturbance at all to my 2nd floor room.

As you can see, the decor was very smart.  Here is the bedroom: 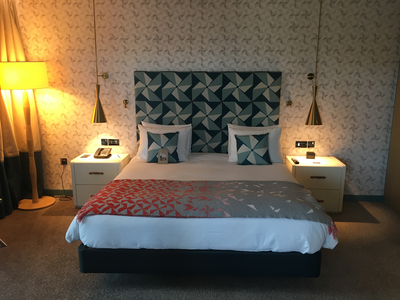 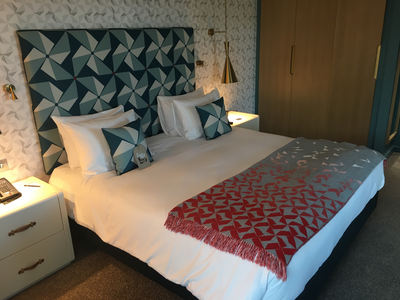 And the living room: 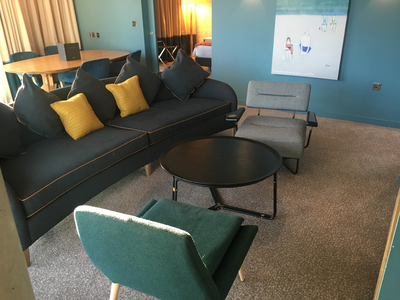 The suite came with a second loo and a coffee machine.  There was also a kettle.  The mini bar was, oddly, empty although some water had been left out.

Whilst not photographed, there was a desk in the bedroom.  I chose to work from the dining table instead.  Whilst I was entitled to high speed wi-fi as a Diamond member, I took the standard free service as that is what the average guest would get.  The speed was excellent and, whilst not being officially high speed, I was still able to stream YouTube.

Here is the shower: 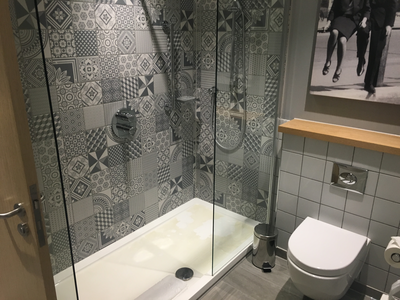 The only issue was the very odd brown stain on the floor of the shower.  It looks like someone used the wrong sort of cleaning products.  Whilst this is only an aesthetic problem, I was surprised it hadn’t been fixed.

And the rest of it: 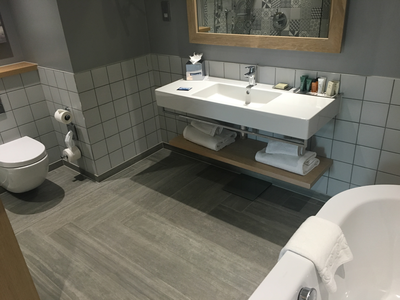 Toiletries were the standard Roth ones found in almost all Hilton hotels.  They looked a bit drab in such a modern space, in the same way I felt they looked out of place at Hilton Sa Torre in Mallorca.  The packaging needs a serious redesign.

With big wrap-around windows, the suite was a very impressive space.  Apart from the mark in the shower cubicle I genuinely had no complaints.

Note that, as this was not an official review trip – I paid for my room – I wasn’t in a position to ask to see other rooms for comparison.

The Executive Lounge at Hilton Bournemouth

As a Diamond member, I got automatic access to the Executive Lounge.  If you are Hilton Diamond (and you can still get a match from any other top tier hotel status you have) then this is a good enough reason to stay here. 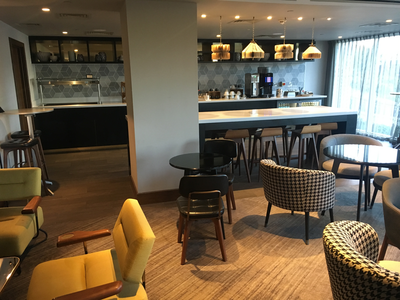 Situated on the 2nd floor, this is a well designed space.  I popped in briefly during happy hour (6pm to 8pm) when there was a mix of cold snacks plus hot chicken wings, vegetable samosas and wine and spirits.  (The photos were taken earlier when there was no food out.) 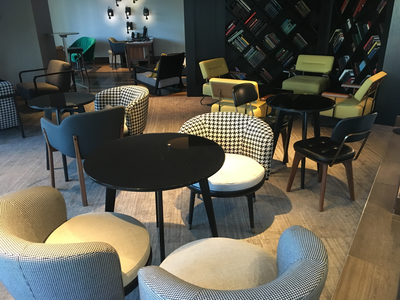 Whilst I had breakfast in the restaurant, I also visited the lounge to see what was on offer.  The breakfast was not as extensive, of course, but certainly nothing to complain about.

All in all, it is definitely one of the better lounges you’ll visit.  If I had one niggle, it is that the seating was arranged for larger groups, whilst I would imagine most users are (on business days) solo travellers and, at weekends and the summer, couples.  You may find yourself having to share a table during happy hour.

I had a small issue with the lounge wi-fi.  If you try to log in to the wi-fi outside of your room, you cannot log in by room number.  You are asked for a general password instead.  I had to track down a member of staff to tell me what this was.

I didn’t eat in the Hilton Bournemouth’s main restaurant, Schpoons & Forx, but the hotel was promoting it – and the chef, Matt Tebbutt – heavily which seemed promising.

The breakfast buffet the next day was not the biggest I’ve ever seen but certainly did the job.  There was no egg station so you were restricted to pre-cooked scrambled or poached eggs.  A bit more pre-cut fruit would also have been welcome. 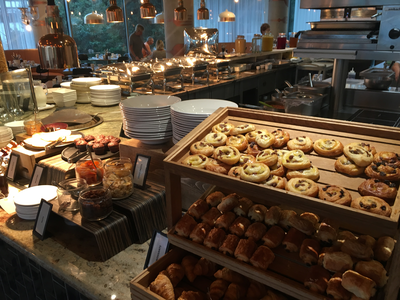 I have seen comments from others that it can get very busy over breakfast.  However, at 9am on a Sunday it was no more than 30% full as you can see: 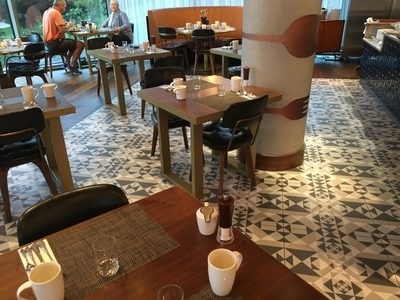 Here is a photograph of the Sky Bar.  It was dark when we were there so you don’t get a picture of the view!

It is a classy but expensive – and fairly noisy – place.  It is not the sort of bar where you would sit and unwind with a newspaper and a glass of wine at the end of the day – you would need to head to the lounge for that. 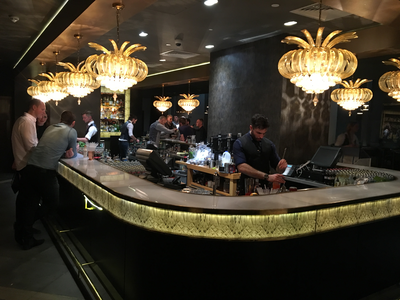 I didn’t have time to visit the spa, but it does appear to have a decent pool from this official picture: 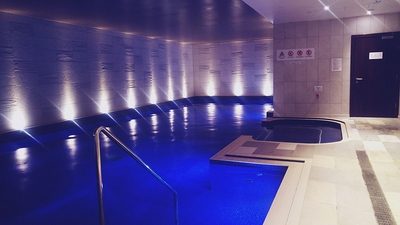 Hilton Bournemouth is a smart, modern hotel with impressive rooms, a decent executive lounge, good food and – if you like that sort of thing – a pricey designer rooftop bar.  The spa pool also looks good.  Just be careful to ask about noise from the bar before taking your key from reception.

It is a million miles away from the depressing 1970’s Hilton properties still found in many UK cities (I am not looking forward to a Hilton Brighton stay next month!).  If they keep up this standard of new openings then the future is bright.

The cash price obviously moves around a lot depending on season, day of the week and whether there are any big events at the conference centre next door.   The maximum price for Hilton Honors points is 50,000 per night (the Hampton is capped at 30,000) although you will pay less off peak.  We paid 28,000 points at the Hampton and 45,000 at the Hilton.

Our review of the adjacent Hampton will appear in a few days.  The Hampton is cheaper, both in points and in cash.  If you are Hilton Diamond, I would take the Hilton due to guaranteed lounge access and the spa.  If you are Hilton Gold, I would also be tempted to take the Hilton as you’ll get free breakfast and it is a smarter property.  If you only have Silver or no Hilton status, the cheaper Hampton – with a free (but crowded) breakfast – may be more tempting.

The Hilton Bournemouth website is here if you want to find out more.