I recently wrote this l-o-n-g article on how I saw the future of airline credit cards in a world of 0.3% interchange fees.  In summary, I expected to see higher fees, lower miles earning but better benefits – I even speculated that airline status as a card benefit may be on the way.

Before I come on to that, let’s look back.  In early 2015, American Express held an investor day in New York which I covered here.  At that event, it was announcing a new IAG contract.  This would include launching an Iberia American Express card, to replace the existing Amex / Visa combination. It never happened.

Two year later, Iberia seems to have dumped American Express.  Whatever deal was signed appears to have been torn up.  This is not surprising, since co-brand Amex cards make little sense with a 0.3% interchange fee.  An airline is better off partnering with Visa or MasterCard because they have far better acceptance in stores and have the same 0.3% interchange fee.

The new Iberia cards are the way forward

It is rare that Iberia shows you the future, to be honest.  They have delivered here though.

Iberia has launched a new premium credit card called Iberia Icon.  It is ONLY available as a Visa.  Goodbye American Express.

It will earn 0.5 Avios per €1 spent.  This isn’t huge, but is probably the maximum that can be funded given 0.3% interchange fees. 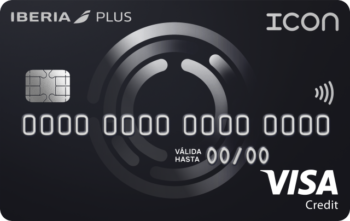 Iberia Plus Plata / oneworld Ruby status doesn’t give you lounge access.  When flying BA, however, you would get access to business class check-in desks, priority boarding, 25% bonus Avios on your flights and free seat selection seven days before departure.  Not bad for €90 per year.

There are some other small benefits too – Avis Preferred Plus status, which comes with free car upgrade and free additional driver, and access to the VISA Hotels Luxury Collection.

The flow chart is simple:

As I reported here, Amex recently lost what is (almost) its final appeal against co-branded credit cards being included in the 0.3% interchange fee cap imposed on Visa and MasterCard.   Only Amex own-brand cards can now charge shops high fees.

Are the BA Amex cards now loss making for Amex?  At best, on the free card, they are paying Avios 0.75p for Avios when you spend £1, yet only receiving 0.3p in pseudo-interchange fees (topped up by IT charges and interest payments and FX fees, knocked down by bad debts and admin costs).

If BA switched to Visa or MasterCard, there would be the same cut of interchange fees to play with BUT the cards could be used in far more places, increasing overall billings.

The BA Amex cards currently generate over £1 billion per month in billings.  That should mean a £10m+ monthly income stream to Avios, but presumably a far smaller – following the recent EU ruling – stream of profit into Amex.  Something has to give.

It will be fascinating to see how this plays out.

The Iberia card is pretty much exactly what I predicted would happen given the new market dynamics.

The questions for HFP readers are these:

None of these cards currently exist, of course. I made up the commercial details – I don’t have any inside information – but I reckon they are not far from where we will end up in a few years.