This is part 2 of my review of the Aer Lingus business class service from Dublin to Boston, focussing on the food.   Part 1, which looks at the best of the various seat options you can pick, is here.

Pretty soon after boarding the cabin crew handed out orange juice and water. 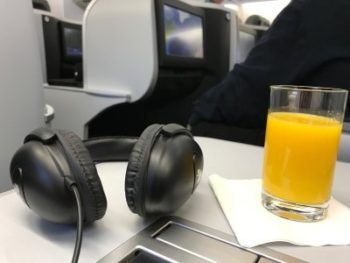 Once everyone was seated we were served champagne. 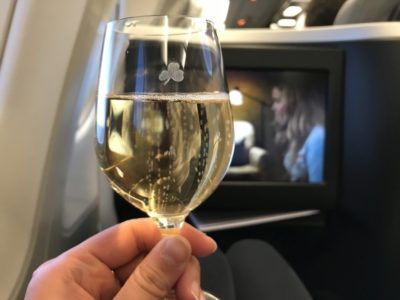 Before the meal service canapes were served.  I’m still trying to avoid wheat and only had the prawn.  (If you require a special meal, you can book this over the phone but I did want to see the standard menu so chose to just leave out the bread bits.) 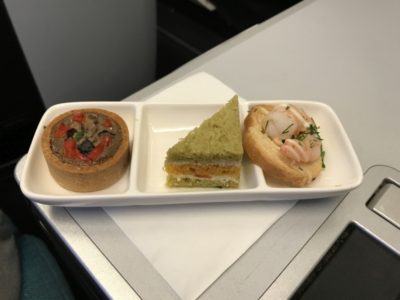 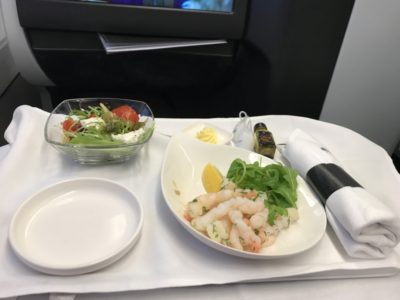 The main course was either fish cakes with sweet chili noodles and roasted vegetables (which can be ordered as a vegetarian dish leaving out the fish cakes), roast Parmesan chicken with steamed spinach, baby potatoes and cream sauce or medallions of beef fillet with champ potatoes and gravy. I had the beef and was positively surprised as I’ve had terrible beef on planes in the past. 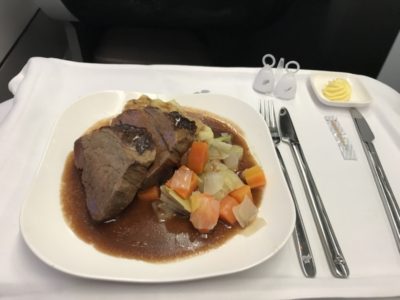 The dessert choices were raspberry and white chocolate cheesecake – and I wish I could have eaten this! – or a cheeseboard. I opted for the cheeseboard which was served with delicious port wine which reminded me of times with my grandmother ….. 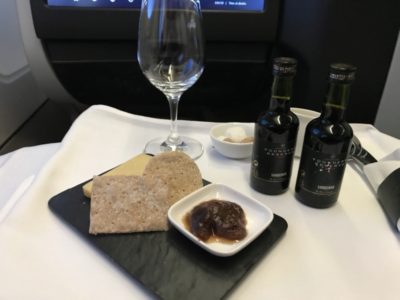 There is nothing to get excited about here but the selection is not substantially different to what most other business class carriers are offering these days.  The last time we reviewed Etihad’s A380 Business Class Studio, arguably one of the top three products on the market, the wine list was available in Tesco for around £10 per bottle.

On the inbound flight the canapes were similar to the ones on the outbound flight. 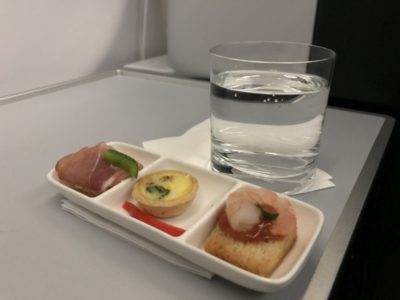 As the return flight was an overnight one leaving Boston at 10:30pm there was an additional express menu option for those passengers wanting to go to bed soon after take off.

I chose the express menu as I had to check out of my hotel at 1pm, had been running around Boston all day and wanted to sleep.  Served on one tray I got seared salmon with red quinoa, butternut squash pilaf, sauteed kale and pomodoro sauce.

The full menu options were grilled beef fillet with asparagus, smashed potatoes, cherry tomatoes in red wine sauce, seared chicken breast with potato gratin, grilled zucchini, baby carrots and de poulette sauce and the seared salmon dish from the express menu which could also be served as a vegetarian dish without the salmon. 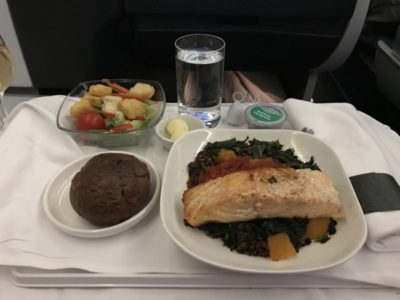 All in all I was very positive about the food offered on board.  That said, breakfast turned out to be a slight disappointment. It was half a handful of fruit and a bacon roll. I understand that many are fans of bacon rolls – Rob has a bizarre love of the ones in BA’s Galleries lounges in London – but a different option to choose would have been nice. The coffee was also not the best. 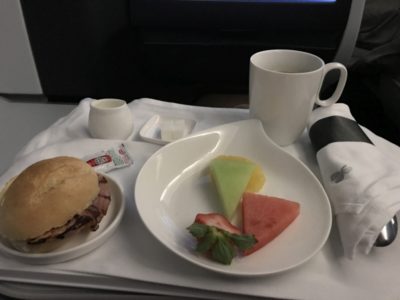 I edited a few clips into a short video that hopefully gives a good impression of the Aer Lingus flight. You can subscribe to our YouTube channel via this page – this is the same link to visit if the video does not automatically appear below.

Aer Lingus has a very good business product that can without doubt compete with bigger name transatlantic carriers.

The cabin crew was incredibly friendly and helpful, the food was – except for breakfast – really good and most importantly the seat was comfortable and had a massage function. The business cabin has seats for passengers travelling on their own as well as couples and only in the latter case there are three seats where you need to climb over your seat neighbour when getting up.  If you pick well you will have far more space and privacy than British Airways Club World can offer.

There are only a couple of things that could be improved like the IFE screen, which cannot be adjusted, and the breakfast selection.

If you are based outside London and would otherwise be connecting to British Airways in Heathrow, connecting in Dublin instead for an Aer Lingus flight is a very good alternative.  If you live near Heathrow then you are trading off the time taken to connect in London for the (substantial) benefits of immigration preclearance in Dublin.

If you are looking to redeem Avios, the massive tax savings when redeeming for Aer Lingus Business Class over British Airways Club World make it something worth considering seriously.  If you have a British Airways American Express 2-4-1 voucher to use then it isn’t so clear cut, but for everyone else the Aer Lingus option is very enticing.

I haven’t finished yet with these reviews …… there are still reports from the Aer Lingus lounges in Boston and Dublin to come.   I will also take a look at the Ames Boston Hotel in Boston, a new addition to Hilton’s Curio Collection of independent boutique hotels.