Virgin Atlantic has still not changed its infant policy, one year on

When the Virgin Atlantic website was relaunched last December, it changed its policy on the pricing of infants on Virgin Flying Club redemptions.

Redemption tickets for infants had historically been charged at 200 miles (Economy), 750 miles (Premium Economy) or 1500 miles (Upper Class) plus taxes and charges.

From last December, they were charged at 10% of the lowest cash fare, plus taxes and charges.

This appears to have been forced on Virgin by the limitations of the new booking software, which they inherited from 49% shareholder Delta.  The new policy is identical to the Delta policy.

The problem is that 10% of the lowest cash fare can be a LOT of money.  This is especially true on one way bookings where no discounted tickets are available.  A one-way Upper Class flight to New York on 1st February will cost you £5,897 (that is not a typo!).  This means that Virgin will ask you for £589, plus taxes and charges, for your infant redemption ticket.

Virgin Flying Club told me a year ago that they were fully aware of this problem and that a fix would be in place in H1 2017.  It is now December, and a recent email from a reader confirms that nothing has changed.  Whether you book a cash ticket or a redemption ticket on Virgin Atlantic, a lap infant will still cost you 10% of the cheapest cash fare at the time of booking.

Qatar Airways has been offering some truly exceptional deals out of Scandinavia this year, such as the recent £1300 business class fares to Australasia.

17 long haul aircraft a week out of Stockholm is a lot of premium seats to fill, so hopefully the flow of good value business class deals will continue. 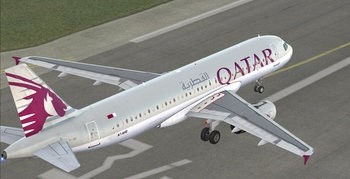 Whilst this is not ‘news’ in any sense of the word, I found it amusing.  A reader sent me an email he had received from American Express encouraging him to sign up for new cashback offers.  See here: 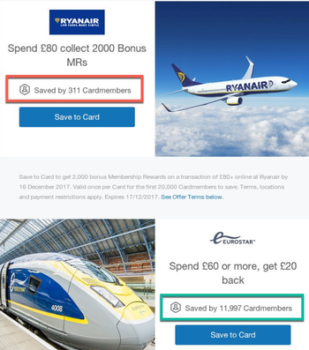 Whilst 12,000 people had chosen to register for the ‘£20 back on a £60 Eurostar spend’ deal, only a paltry 311 had signed up for the offer of ‘2000 bonus Membership Rewards points when spending £80 on Ryanair’!  There isn’t even any guarantee that those 311 people were eventually going to fly to Ryanair – many will have saved the offer ‘just in case’.