This is my review of SWISS Business Class between London Heathrow and Zurich.

Critics of British Airways Club Europe – and whilst a fairly heavy user I am not the biggest fan, mainly due to the food – have a problem.  Whilst it is possible to point to many airlines as offering a superior long-haul business class experience, there really isn’t much to offer in terms of short-haul benchmarks.

Criticism of Club Europe generally centres about value for money compared to Euro Traveller – especially if you have BA status and can pre-book an exit row seat with more leg room than CE – or with low cost carriers such as easyJet.  You don’t hear many comparisons with superior European business class products. 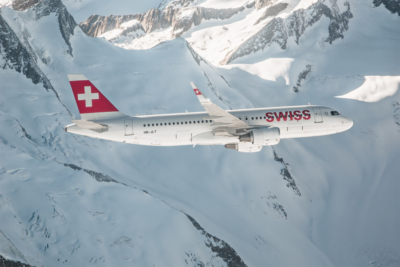 You would think that SWISS would be able to set an example, with their aircraft packed full of expense-funded travellers.  On my 6am departure on Tuesday (the first flight out of Terminal 2 that day) there was FIFTEEN rows of Business Class but only 62 people on the aircraft in total!  I actually thought that SWISS had removed the curtain between Business and Economy until I was getting off and noticed it was actually 2/3rd of the way down the plane.

SWISS Business Class, however, proved to be dire.

In no particular order, let’s see why:

1C stuck out into the galley

Because of the way the cabin is laid out, 1C stuck out into the galley.  Having boarded fairly early, my feet and indeed my entire body were targets for the feet and bags of everyone else boarding after me.  Not fun. 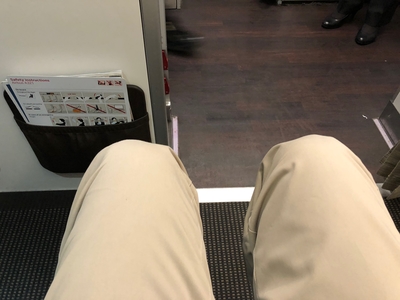 Whilst rarely seen on on low-cost carriers, British Airways is retaining Club Europe wardrobes.  They won’t take many coats in the future, because all of the emergency medical equipment is being moved into the wardrobes in the current refurb, but they will remain.  SWISS has got rid of theirs.

SWISS has the ultra-thin seating that British Airways is introducing which runs throughout the entire plane.  You can see the width in the picture below.  If I’m honest it wasn’t hugely uncomfortable but not ideal.

The photo makes the seat look fatter than it is, because the back panel is partly covered in the same leather as the seat.  This optical illusion does work. 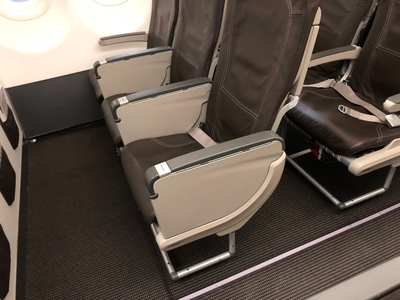 Like BA, the middle seat is blocked in Business.  Unlike BA, they do not have a purpose-built table to slot in the space for the benefit of passengers.

This is what we were fed – a vegetarian omelette with a slice of cheese thrown on top and some mushroom sauce.  Not great.  There was no Plan B.   Amusingly, the guy next to me – who had ordered vegetarian – refused it after taking one look. 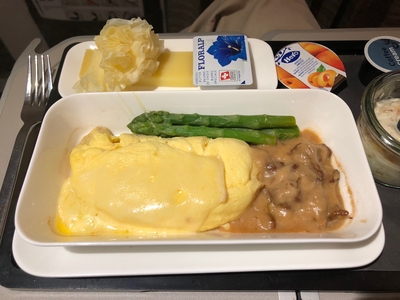 It wasn’t all bad, of course:

Boarding was efficient, albeit with only 62 passengers it wasn’t a major strain

Bottles of water were offered before take-off

SWISS still comes around the plane with chocolates before landing

What does confuse me is why SWISS bothers to pay for a full crew to stay in London overnight, plus the parking costs of the aircraft, just to depart at a time so early (6am) that it only has a token passenger loading.  Tuesday is generally one of the busier days of the week too.

If there is a solution to the problem of European short-haul Business Class, SWISS has not found it.  Given a straight choice between British Airways and SWISS I would take BA although, as I will cover separately, the Lufthansa lounge in Terminal 2 isn’t bad.

If you’re wondering whether SWISS long-haul is any better, that review will also follow in a few days.