Anika and I were at the UK’s only annual co-brand credit card conference yesterday where representatives from most of the card groups we discuss on Head for Points meet up to discuss what is happening in the industry.  Which, at the moment, is obviously quite a lot.

If you are interested in seeing what I spoke about – none of which will be a surprise to regular readers – you can download my slides (PDF) by clicking the image below. 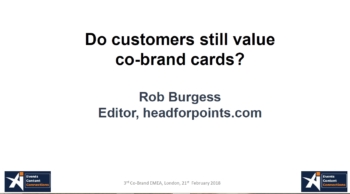 I would like to be able to say that we came away with an exciting new vision for where the co-brand card market is going, but we didn’t.  “No-one knows nuffin” it seems, so far.

This is what we did pick up:

One consultant felt that the impact of 0.3% interchange fees is not as bad as expected.  His logic was this:

I am not convinced, partly because I do not feel that interest rate revenue is that high, and because only one card (BA Premium Plus) has hiked its fee.  I doubt MBNA would have killed its entire airline product line if the net revenue drop was only 20%.  This view only holds water if the card companies ditch their highest spending customers and attempt to sign up more people who pay interest – and there are few of those in the core London business traveller market.

One of the longer established co-brand travel cards has just started a root and branch review which is likely to see a substantially changed product emerge.  In this particular case it might actually be positive.

We may see cards try to reign in costs via benefit cuts (no 2-4-1 voucher?) or caps on points earning – or perhaps staggered earning tiers which reduce depending on how much you charge.  Big spenders are now a problem as the marginal miles cost exceeds the marginal interchange fee.

Cardholders are seen as insensitive to rises in fees and interest rates – seemingly true in the case of the BA Premium Plus fee rise, I agree

The current operating model (airline takes all its revenue via sign-up commissions and a ‘pence per mile’ payment) is broken.  Future co-brand agreements should be treated as ‘open book’ joint ventures with a 50 / 50 profit split, with the airline or hotel group having to accept that it is now in the credit card business.

Card data needs to become a greater source of value.  Apparently American Express has never delivered on the promises of ‘big data’ it made to British Airways.  The ability to use card data – perhaps using PSD2 to add data from other cards – must improve.  This may involve doing things which seem illogical, eg if the BAPP Amex offered double Avios on all airline purchases – not just with BA – then BA would get a better picture of how much you were spending with other carriers and could act accordingly.

‘Card linked offers’ such as the Avios and Virgin ‘in-store earning’ deals are seen as a valuable source of revenue going forward.  (Off the point, but apparently Head for Points is entirely responsible for the many changes to the Virgin / Waitrose in-store deal, because it went so crazy after we originally wrote about it that the budget was blown very quickly and emergency action was required!).

The good news is that there was not a major sense of despair in the room.  All of the parties have too much at stake.