We have given some coverage recently to IHG’s much-publicised hunt to buy a ‘true’ luxury hotel brand.  There was much speculation that they wanted Belmond as we reported recently.

IHG has clearly failed to persuade any true luxury brand to sell.

Instead, perhaps more out of desperation than anything else, it has acquired 51% of Regent Hotels & Resorts for $39m, ie peanuts.  For comparison, the refurbishment of InterContinental Park Lane a few years ago cost three times that.

The reasons it is so cheap is that Regent Hotels & Resorts only runs six properties in:

That’s it.  The pipeline only consists of Jakarta, Harbin and Phu Quoc.

Here’s the thing.  These are not true luxury hotels in the Mandarin Oriental model.  They are perfectly pleasant and their average TripAdvisor ranking is usually higher than the InterCon in the same city, but that is not the same as buying Aman.

The best Regent is probably Berlin, but this was a Four Seasons until a few years ago so it clearly has a great hard product.  In Singapore, the Regent is actually managed by Four Seasons.  IHG will presumably move to terminate this contract but that is unlikely to improve the hotel.

I’m not entirely convinced, as the press release says, that “IHG has a deep understanding of how to protect what makes the Regent brand so unique and special”.  Kimpton Hotels did at least have a ‘special sauce’ (but everyone complained that IHG would wreck the ‘special sauce’, so admittedly they probably can’t win!). 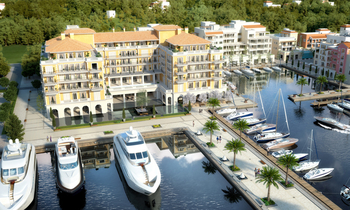 I could understand it if IHG had bought the brand with the intention of folding it into InterContinental.  That would have made sense, albeit it would not have added many new markets.  Instead, it intends to roll it out with a view of taking the chain to 40 hotels.

There is also the issue of Regent Cruises.  Once part of the same business, but no longer, the cruise line not only shares the name but has an identical logo.

And a potentially bad move …..

We obviously need to see what IHG can make of this.  Even Belmond would have been a better fit in terms of building out a separate ‘tourism rather than business’ focused luxury brand – Regent Hotels only makes sense to me if it was to be re-branded, which it isn’t.

Having spent 16 years of my career in M&A, this feels like a panic buy in response to too-public promises that had been made about an acquisition.  IHG cannot even begin to buy the remaining 49% until 2026, which means that the existing shareholders will be the main winners from any growth in the chain.