This is part two of my review of the South African Airways business class service between London and Johannesburg focusing on the food.

Part one which looks at South African’s A330-300 business class cabin and my seat is here.

As a reminder, South African Airways gave us a free return trip to try out the brand new A330-300 aircraft.  This has an improved Business Class seat and is now operating SAA’s daily London to Johannesburg flight.  HFP paid its own hotel and other expenses.

We were offered a welcome drink before take off, both outbound and inbound. The choices were either orange juice or South African sparkling white wine (Laborie Brut which retails at £7).

Shortly after take off we were served canapes and drinks. I enjoyed the Laborie Brut, so I had another glass. There were also two different red wines and white wines as well as three different beers and the usual gin, whisky, rum and soft drinks. 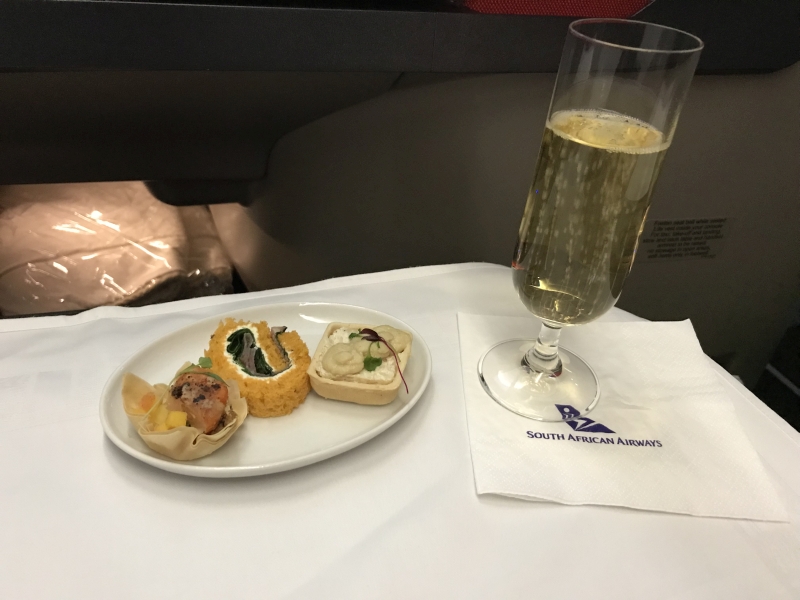 Next was a choice of a starter. I had the tomato soup with garlic bread. The other options were Beef Bresaola or a seasonal salad.

As you can see, everything was nicely plated albeit served on a large tray.  This was removed before dessert was served. 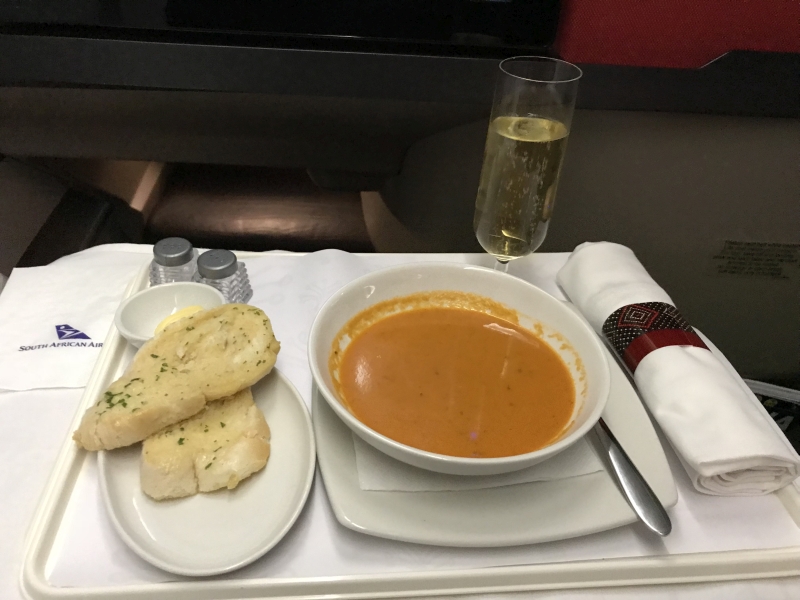 The main course choices were seared beef filet, roasted chicken supreme, seafood trio and aubergine stew.  I chose the seafood trio which turned out to be just one kind of fish: salmon. It was very good though. 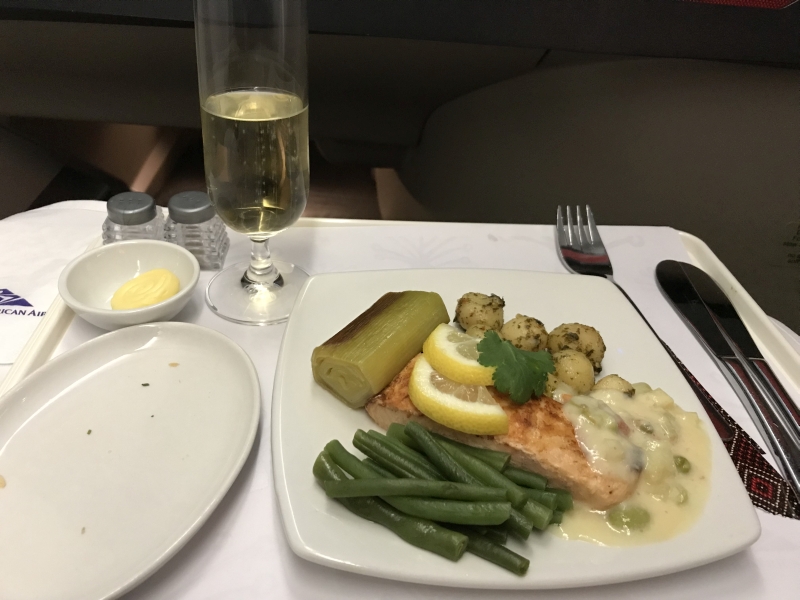 For dessert I chose cheese with crackers. I was offered a port wine but chose some water instead.  In general I thought that this was a good quality light meal which was a sensible choice given that most people would be trying to sleep immediately after eating. 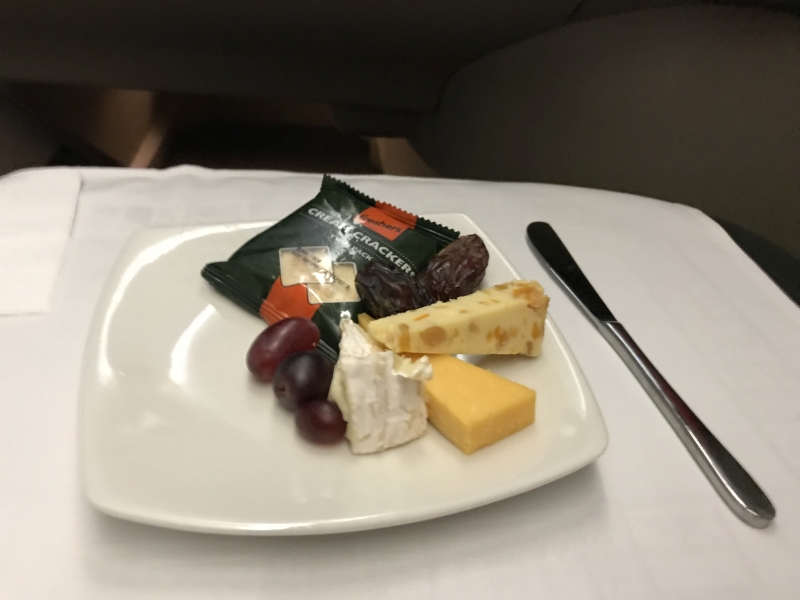 Before going to sleep I was asked to fill out a piece of paper with the breakfast options for the next morning.  I chose natural yogurt and fruit with a croissant and muffin. The coffee was ok by aircraft standards. 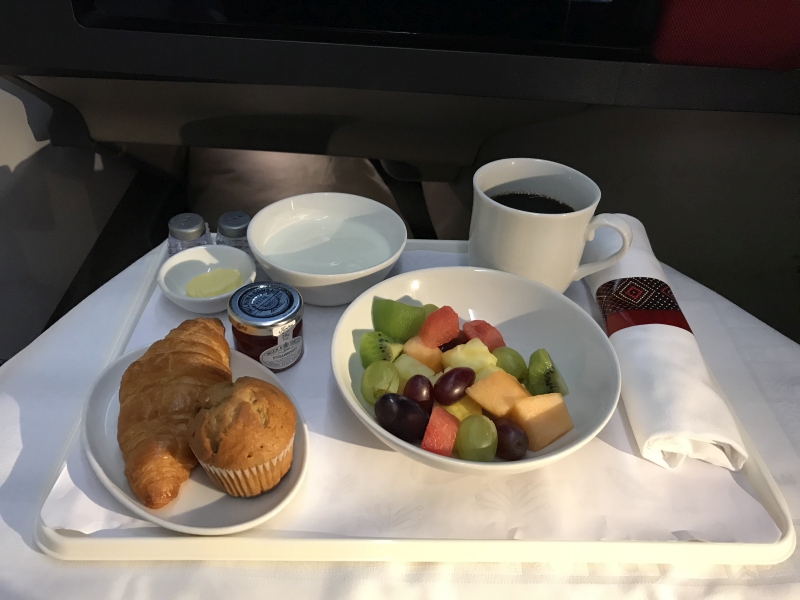 The canape selection was different to the one from the outbound flight.  Whilst this is only a small thing, it does make a difference as the same food would have been a bit boring. 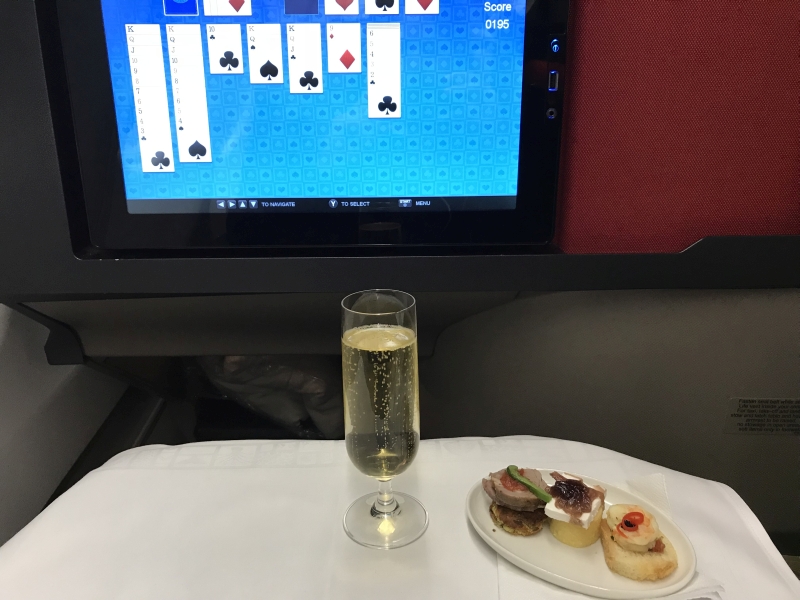 I chose the soup of the day as my starter which was a mixed vegetable soup. The other options were smoked salmon with trout pate or a seasonal salad.  Again, whilst the return flight departs at the same time of day (early evening) as the outbound flight, SAA had changed the options to ensure that you got some variety. 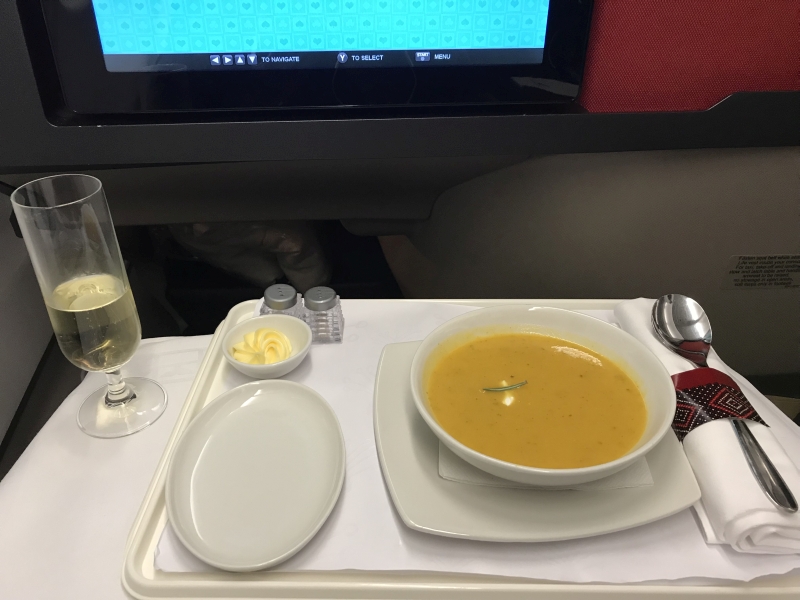 The main course options were pan fried beef fillet, lemon and olive herbed buttered chicken breast, herbed pancake stuffed with spinach and roasted Norwegian salmon. I chose the latter. It was good but the fish was a little bit dry. 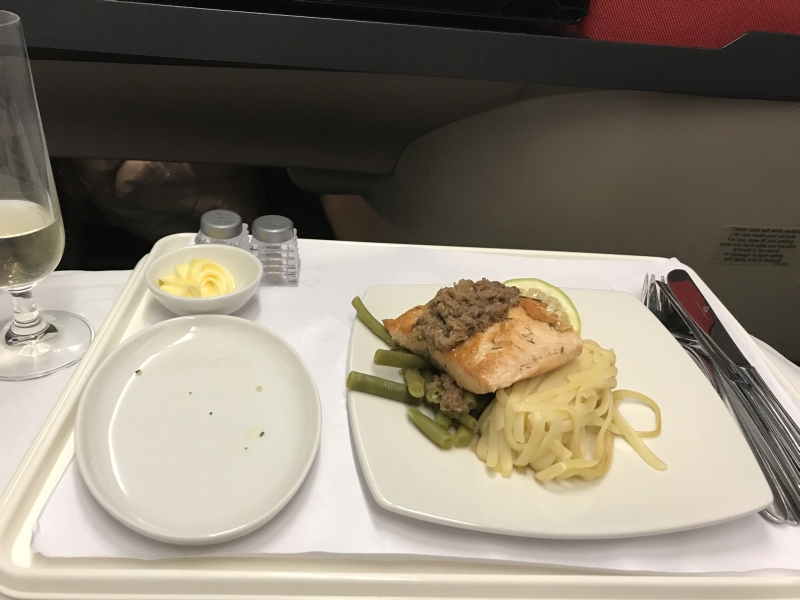 Dessert was ice cream and/or a cheese plate. 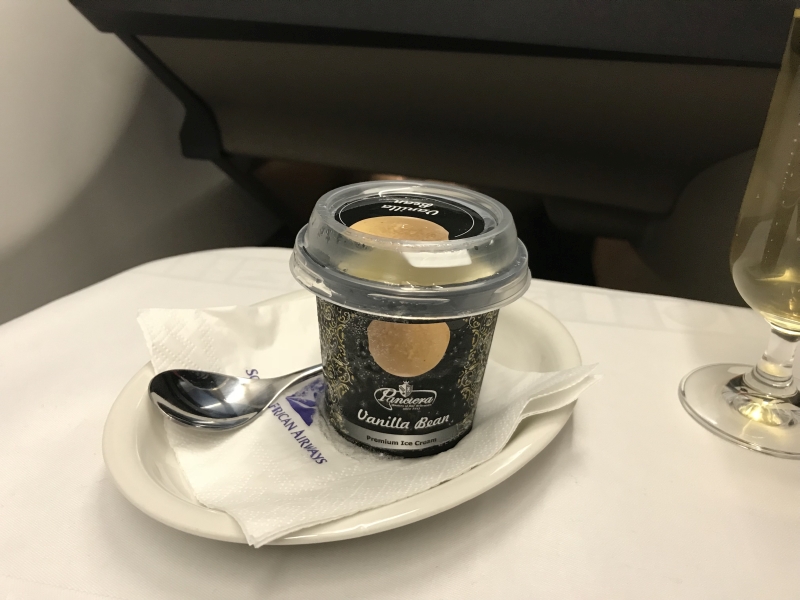 My breakfast the next morning was pretty much the same as on the outbound flight. This time I wasn’t asked to order my food in advance. 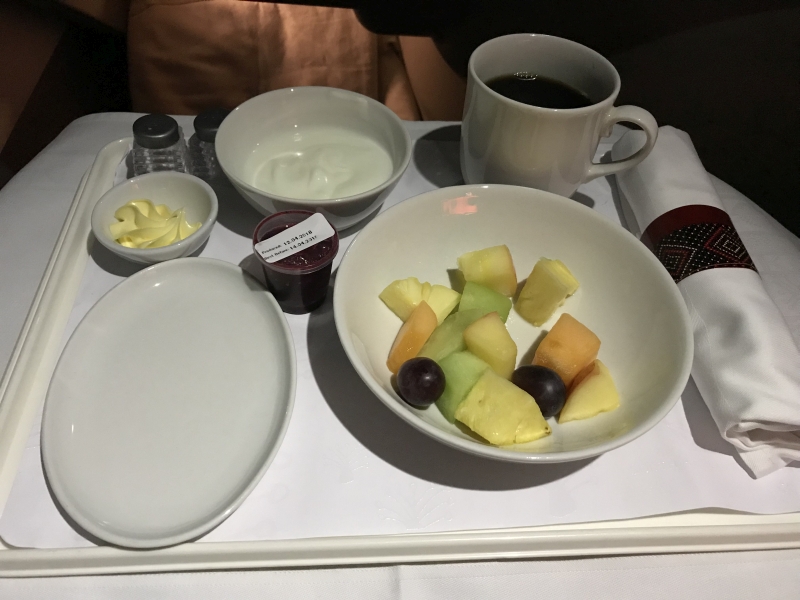 Overall the food worked well and was well up to the standard you would expect from a major international carrier in business class.

I edited a few clips into a short video of the new A330-300 South African Airways Business Class product. You can subscribe to our YouTube channel via this page – this is the same link to visit if the video does not automatically appear below.

I had two good flights to Johannesburg and back. South African Airways has a sound new business product with a good sized, comfortable fully flat seat.

Except for the dry salmon on the inbound flight the food was very good and so was the drink selection. It was also great to have two different food menus on the inbound and outbound flight. The cabin crew made me feel welcome and was very attentive throughout the whole flight.

With the 1-2-1 seating configuration also offering lots of privacy, the whole package works well and I recommend them for your next flight to South Africa and the wider region.

There are two more articles still to come.  Tomorrow I will take a look at the SAA flagship lounge in Johannesburg, and next weekend I will share my thoughts on the InterContinental Sandton Towers hotel.