I was in Gatwick’s North Terminal last Thursday reviewing the new Club Aspire lounge – that report will follow soon once we’ve edited the accompanying video.

Rather than go through the hassle of getting a Gatwick North airside pass, I decided to tie in my visit with a planned trip to Paris.  This meant that I would need to fly easyJet for the first time in about 18 months as it is the dominant airline in the North Terminal.

I thought I would see if it was possible to recreate the British Airways Club Europe experience on easyJet and how much it would cost if I did.  No particular reason why, but it seemed a good idea at the time.

In the end, it came out at £92 for the one way trip, although that would have increased to £107 if I didn’t have lounge access via Priority Pass.  The base fare for the flight could have been a little cheaper had I booked further out than 16 days in advance.

This is how I did it.

The cost broke down as:

£5 for use of the Priority Security lane at Gatwick

£15 notional cost for the Club Aspire lounge, although I got in for nothing using my Priority Pass from my American Express Platinum card

£7 for a meal deal snack, comprising a bacon baguette, coffee and a Kit-Kat (prosecco would have added an extra £7 but it was 8am ….)

DOWNSIDE – easyJet sells the middle seat; easyJet won’t pay for air bridges so getting on and off the aircraft is a pain; no wardrobes; no checked baggage allowance

UPSIDE – far wider food selection on easyJet; seat selection is included in the prices I quoted; Row 1 is not restricted (as long as you pay up) as it is on BA

Let’s look at how each part of the package performed in practice:

Here is a very handy tip.  Premium Security – bookable here – costs £5 per person at Gatwick North.  However, for the same price of £5 you can pre-book your slot in the No 1 Lounge at Gatwick North via this link and this comes with premium security for free.

If you have a Priority Pass or other lounge access card, it is pointless booking Premium Security on its own.  Reserve your No 1 Lounge visit for the same £5 price and forget any concerns about the lounge being full.

If you don’t want or need to pre-book your lounge visit, you can get £1 off Premium Security most of the time by registering for MyGatwick and searching through your tailored offers.

We’ll talk about the Club Aspire lounge later in the week, but it was OK.  The No 1 Lounge on the floor above is better but busier.

Club Aspire clearly isn’t the same scale as the British Airways lounges in Gatwick South which we reviewed here, which are arguably better than those at Heathrow.  The No 1 Lounge comes close though.

Subject to capacity I could also have used my Priority Pass at My Lounge, reviewed here.

On British Airways I would have boarded in Group 1.

On landing I was first off the plane but the use of buses to get us into the terminal in Paris meant that I ended up about 20th in the passport queue.

The difference here is that 1B was filled, so there was the usual jostling over the armrest.  Because easyJet charge a chunky premium to sit on the front row, you probably won’t get this on a non-peak flight.  As it happened, my flight was TOTALLY full and easyJet was asking for volunteers to take €500 plus a free taxi to get the 4pm flight from Luton (8 hours later!).

They found two takers.  I did check to see if I could get a last minute Avios redemption on BA around noon but there was nothing bookable and I wasn’t prepared to lose eight hours of a short trip.

The upside of easyJet is that you get a far wider variety of food and drink than you would get on British Airways. 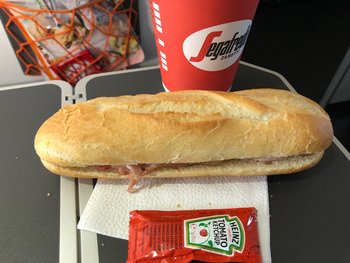 I have to say that the bacon baguette was pretty good.  It is only a shame that the crew don’t remove it from the plastic wrapper for you.

What have we learned from this important state-of-the-nation experiment?  Not much, obviously.  If there is a lesson, it is that the low cost carrier experience does not need to be low quality if you, erm, spend more money so that it isn’t so low cost any longer ….

In the end I spent a notional £107, and £92 of real money.  British Airways Club Europe flights seem to start at £141 one-way (Heathrow to Paris) and – given the empty middle seat, Avios, tier points and the fact that Heathrow T5 is simply a more pleasant place than Gatwick South – I would probably choose the BA route if £107 vs £141 was the option on the table.

Coming home, of course, I took Eurostar which beats the plane any day …..

PS.  By coincidence, 24 hours before I flew to Paris, Anika was in Gatwick South.  She was trying to get a Club Europe-style experience on Vueling, by paying a 300% premium for Vueling Excellence.  It all went wrong as you will find out soon …..