This is my review of the Melia Barcelona Sky hotel.

We had been wanting to do a review of Vueling’s business class short haul product for a while, which realistically meant booking a Gatwick to Barcelona flight.  As you may have seen from my article last week, it didn’t go well.

When we mentioned our proposed trip to Spain to our contacts at Melia, they offered us a free room at one of their Barcelona hotels in return for a review.  We have reviewed a number of Melia hotels over the last couple of years and, of course, we have used the Melia White House at Regents Park for our last two Christmas parties.

I had lunch and a quick tour of the Melia Sarria and then stayed at the Melia Barcelona Sky.  Melia provided me with a room for two nights including access to the perks usually only given to guests at The Level hotel which occupies the upper floors.  Head for Points paid for everything else.

The Melia Barcelona Sky used to be a lifestyle-driven ME by Melia hotel and was changed into a standard Melia in 2013.  It is now two hotels in one. The main hotel, covered in this review, is a 4* and The Level at Melia Barcelona Sky is a 5*. Both parts have separate entrances and receptions but share most of the communal areas.

My room was in the 4* part of the hotel which covers the lower floors.  I was, purely for the purposes of this article (you would not get this as a standard guest) given access to the Level lounge, the Level breakfast and the happy hour.  I will focus on Level in part two of my review but, to summarise my conclusion, I recommend that you pay the modest extra cost for The Level because the difference in room quality and benefits is well worth it.

If you have an American Express Platinum card, you can claim free Gold status in MeliaRewards.  MeliaRewards Gold does not offer a huge amount, to be honest, but it is certainly better than nothing if you stay here.  You will receive:

Do not use Uber when in Barcelona.  I made that mistake and ended up waiting 20 minutes for my Uber at the airport which took me to the Melia Sarria for my lunch meeting.  When I ordered a second Uber to take me across town to the Melia Barcelona Sky, I had to wait 30 minutes.  On arrival the driver decided to not stop outside the hotel but rather turned left, forcing me to cross a four lane road.

I decided to use Cabify for my return trip which also lets me earn Avios via Iberia as we explained here. Cabify drivers wear a suit, provide complimentary bottles of water and I only had to wait seven minutes for my driver. The ride back to the airport took 33 minutes and cost €39.

Barcelona has a good public transport system, but from the hotel to the airport I would have had to take a few buses and a train and it was too hot for that hassle.

Barcelona is not too big and you can access the city centre and tourist attractions pretty much from anywhere. The Melia Barcelona Sky is located in the North East of Barcelona close to the sea with the nearest beach being a 10 minute walk away. La Sagrada Familia is a 10 minute bus ride plus a 10 minute walk away, Arc de Triomf is a 20 minute metro ride and La Rambla and the harbour are about half an hour by metro.  I only had one day in Barcelona and got to see a good amount of the city. 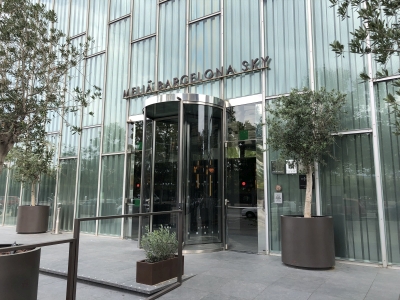 There were two reception desks right by the Melia Barcelona Sky entrance which were not busy, but I was told to check in on the 25th floor which is where the Level lounge is.

The rest of the ground floor consisted of a sitting area with books and the restaurant with a large amount of seating. 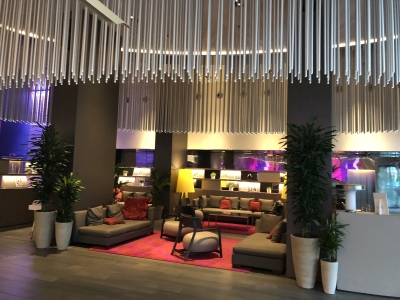 The hallways outside my room looked a bit industrial with metal panels on the walls. 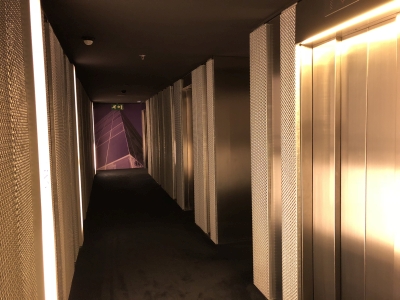 In Part 2 of this review I look at the rooms on The Level, if you choose to pay a little extra to stay on the higher floors and to get access to the lounge.  I recommend doing this.

On the lower levels, at the Melia Barcelona Sky part, I had a Premium Sea View room on the 14th floor. That said, here is a picture of my view which is lacking in any sort of view: 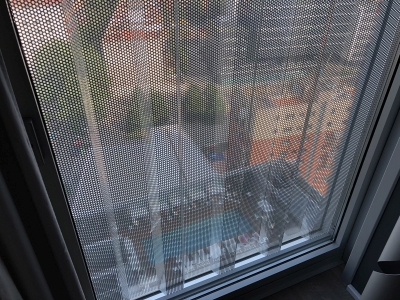 Apparently all rooms have one normal window and one this weird filter.  All except for mine, which only had the one filtered window!

The room itself was a very good size with a separate bathroom and a glass window above the bathtub. There were blinds in case you prefer to not look at the bathroom when in the bedroom.

The bed was comfortable and had the main light switch above one of the bedside tables which was handy at night. Each bedside table had a EU socket underneath.  There were no USB chargers.

Opposite the bathroom door was a large wardrobe with drawers, shelves and hangers. There was also a safe and a minibar fridge. 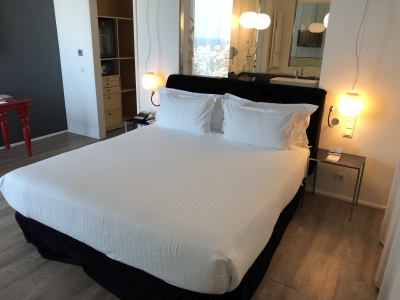 It’s probably a matter of taste, but I liked the red desk and the sculpture-lamp to the left of it.

There were some macaroons, berries and a bottle of water on the table. The water bottle was not replenished and the tap water smelled of chloride so I bought some bottled water (which I normally try to avoid) at a small shop outside the hotel.  There were also three more sockets next to the desk 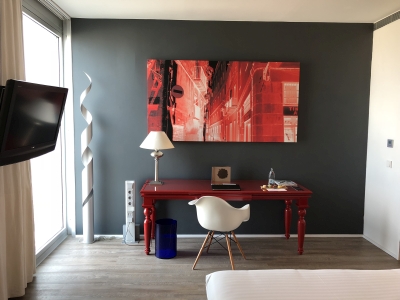 In the opposite corner was a chaise lounge. The TV was opposite the bed and had a number of Spanish, German and English channels amongst others. I was given a password for the wifi which was fast enough for streaming movies, but ended up watching German TV. 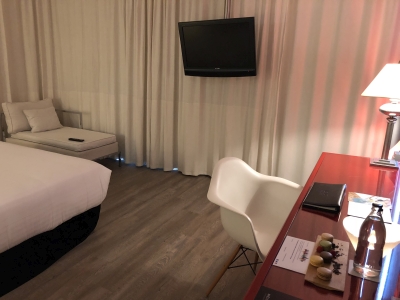 The bathroom was big enough and had a lot of storage space around the sink. There was a full length mirror as well as a make up mirror. The light was very good. 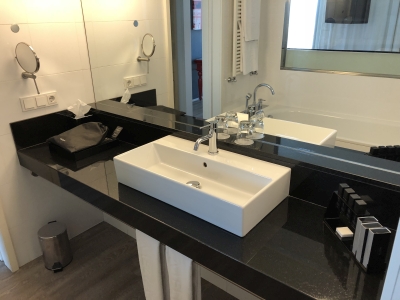 Shampoo, conditioner, shower gel and body lotion were a Melia own brand and the little bottle stand was pretty neat.

I didn’t like the shampoo as it made my hair squeaky, a sign for the shampoo removing the natural hair oils. 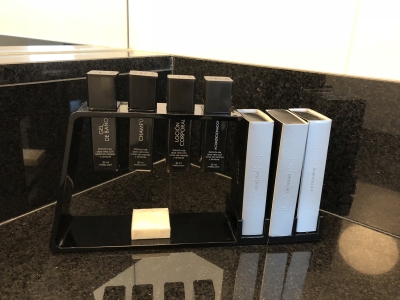 The bathroom had a bathtub and a separate shower. As the shower was very small and opposite the toilet it was difficult to get a proper picture of it (there is footage in the video further down).

The shower had a handheld shower head as well as a rainfall shower, but as the shower was rather small you couldn’t really escape from the water which meant I had to adjust the temperature whilst standing outside. 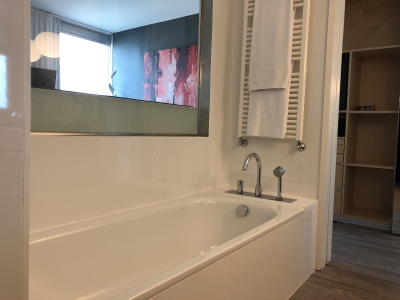 4* hotel guests can have breakfast in the Sky Food Bar on the ground floor. I had breakfast on the 24th floor with the Level guests, but the buffet was very similar with a large selection of breads, cheeses, meats and made to order egg dishes. 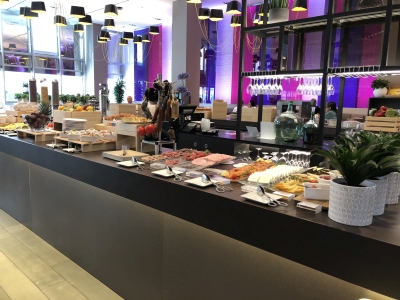 In the evening the Sky Food Bar was serving burgers, salads and some Spanish dishes. They were showing the football on large screens and a number of guest was watching the football and had drinks. 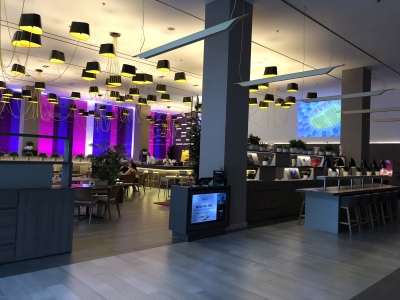 I did not have dinner included and HfP paid for it. I chose a Caesar salad with breaded chicken and patatas bravas, baked mini potatoes with a spicy sauce which was really good. 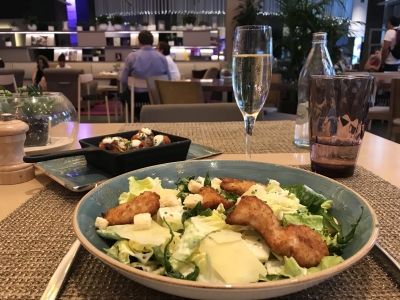 The Sky Food Bar also has an outdoor area which is nice, but can get noisy as it’s right next to a main road. 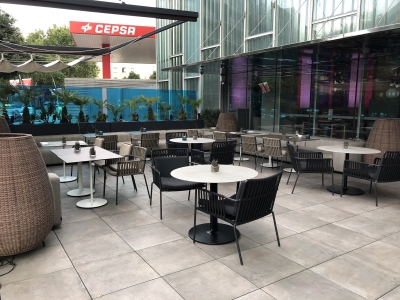 There was a pool on the 6th floor with lots of pool chairs: 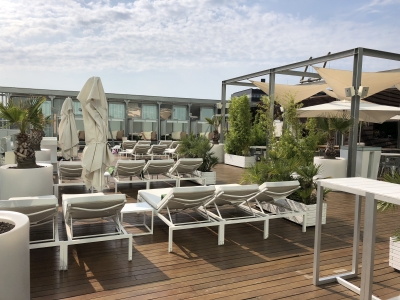 …… and a number of sunbeds with pillows and a sunshade roof. 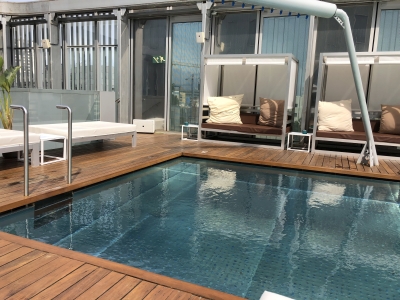 I took some video and edited it into a short clip that hopefully gives a good impression of the Melia Barcelona Sky. You can subscribe to our YouTube channel via this page – this is the same link to visit if the video does not automatically appear below.

This was part one of my review.  In part two – click here – I look at The Level at Melia Barcelona Sky and its perks and tell you why I think you should stay there.

How to get MeliaRewards Gold status from American Express (September 2021)

Do you know that holders of The Platinum Card from American Express receive FREE MeliaRewards Gold status for as long as they hold the card?  It also comes with Marriott Bonvoy Gold, Hilton Honors Gold and Radisson Rewards Gold status.

Until 2nd November 2021, The Platinum Card comes with a bonus of 60,000 Membership Rewards points.