British Airways put out a press release on Tuesday confirming what we wrote about on Monday – that flights to Osaka are about to be launched.

As of 8.45am on Tuesday flights were not bookable.  They should appear during Tuesday so keep an eye out if you want to snag a redemption, especially for the 2019 cherry blossom season in late March and very early April.

Remember that outbound flights will only operate on Monday, Wednesday, Friday and Sunday, returning a day later.  The aircraft is a 787-8 – these are not the ones with the dodgy engines.

The airport code is KIX for people who like to search that way. 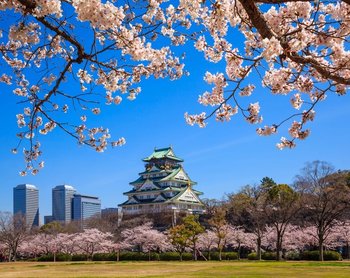 “British Airways customers are set to soak up Osaka next summer as the airline is launching direct flights to Japan’s second largest city. The four-per-week service takes off from March 31, 2019 with flights departing from Heathrow Terminal 5 and landing into Osaka’s Kansai International Airport.

The new route takes the number of daily flights between London and Japan offered as part of British Airways’ joint business with Japan Airlines up to 32 per week.

Japanese tourism is set to grow from 24 million annual visitors in 2016 to 40 million in 2020. Osaka was recently named as the third most liveable city in the world and is considered to be the food capital of Japan.

Japan Airlines will also offer a code share on the new service, further strengthening the joint business and giving customers more opportunities to earn and redeem Avios loyalty points across the network.

Sean Doyle, British Airways’ Director of Network and Alliances, said: “Our partners Japan Airlines and Finnair have demonstrated that Osaka is a hugely popular route with leisure and business travellers alike, so we are excited to launch direct flights from London, giving customers another gateway. Japan is a highly sought-after destination for British tourists and many of the country’s key attractions are within easy reach of Osaka. This new route will also open up more opportunities for companies to explore and build business in the region so we’re expecting this new service to be well received by our customers.”

Hideki Oshima, Japan Airlines’ Executive Officer International Relations and Alliances, said “We are extremely excited with the announcement of British Airways’ new route. Not only does it provide more choices and greater convenience for our passengers traveling between Japan and Europe, but it is also great news for the Kansai region. We look forward to serving our mutual customers through our codeshare service and contributing to the regional economy in Osaka.”

The route will be operated by one of British Airways’ newest aircraft, the Boeing 787-8 Dreamliner, with special return fares from £599 in World Traveller, £999 in World Traveller Plus and £2499 in Club World available to book from today on ba.com and jal.com.

British Airways is also adding four cities to its joint business agreement with Japan Airlines, with the BA code being put on flights between Tokyo Haneda and Miyazaki, Kumamoto, Komatsu and Matsuyama.

British Airways will launch 17 new routes across the globe this year including direct flights to Durban that start next month. These new routes come as the airline rolls out a £4.5 billion investment plan for customers over the next five years, which includes the installation of the best quality WiFi and power in every seat, fitting 128 long-haul aircraft with new interiors and taking delivery of 72 new aircraft.”