This is our review of the Premier Lounge at Bali (Ngurah Rai International) Airport, used by Qatar Airways and other airlines.

It is part of Jamie’s set of reviews on his recent trip to Indonesia, flying business class on various oneworld airlines including British Airways, Malaysia Airlines and now Qatar Airways.  Over to Jamie:

The time had come for me to return to the UK after a fascinating trip around Indonesia.  I’d had a great month travelling (14 flights in all) and diving.  This really is me with a whale shark – the lack of hair gives it away ……: 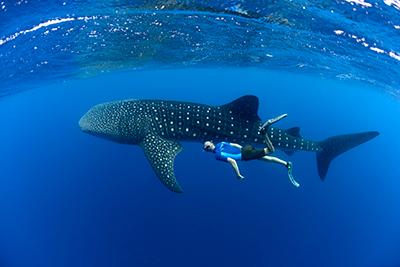 I was flying home via Doha with Qatar Airways, booked with Avios, and was going to experience their business class product for the first time.

I knew I would be able to relax in a lounge before the flight, although I wasn’t sure which one Qatar Airways was using.  There were two general lounges in the international terminal at Bali – the Premier Lounge and the T/G Lounge. Either way, I planned on getting to the airport in plenty of time to maximise the experience.

However, a last minute trip to the Uluwatu Temple that day meant I arrived at the airport later than planned, just one hour and forty five minutes before take off instead of three hours.  It was worth it, though, just to see my friend get his sunglasses stolen by a monkey at the temple.  He got them back.

Perhaps my expectations for the lounge were too high.  As it turned out I still had plenty of time to check in and explore all the lounge had to offer.

On checking in I discovered that Qatar Airways uses the Premier Lounge in Bali.  During my trip I’d visited several Indonesian airport lounges in Jakarta, Makassar and at the domestic terminal here, all courtesy of my Priority Pass. I wasn’t particularly impressed with any of them but my expectations were greater here as I knew this lounge was used by business class passengers from a number of good airlines. The lounge was well signposted and easy to find, located on the upper mezzanine floor next to the T/G Lounge.

The entrance reception was small but nicely presented: 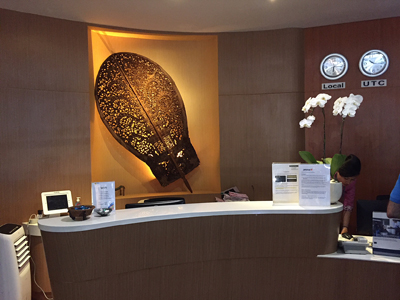 I was greeted warmly and made my way round to the left and into the lounge. My first impression was that it felt a little dated. I don’t know if it was the carpet or the general decor or both but the impression I gained was that this lounge had been around for a while. Yet it was relatively new and only opened in January 2015.  Some aspects of the design were impressive – the ceiling was unusual and the traditional ornaments displayed around were interesting. 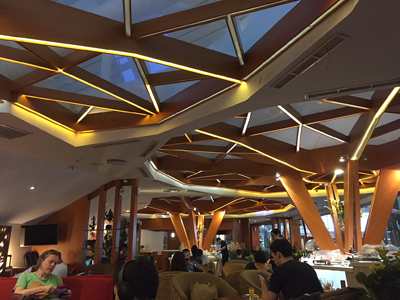 The choice of wood furnishings and lack of any modern edge rendered the lounge dull and uninviting, sadly.

It’s not a large lounge – the footprint is smaller than your average No. 1 Lounge in the UK.  It was 5.30pm on a Tuesday evening and the lounge was busy. There was a selection of different seating options, although this was less cohesively arranged than many other lounges. It looked and felt crammed with the lounge only at, I’d guess, two thirds capacity.  I found this somewhat overwhelming at first but eventually found a spot on one of the circular sofas pictured below. 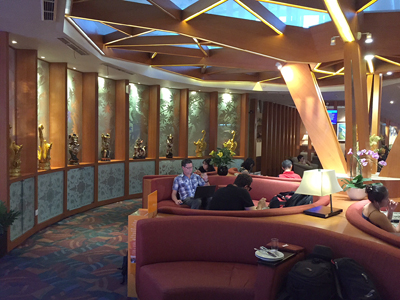 These were quite large and would be perfect for families. There were also individual chairs scattered around or in groups of four and two or three private areas/rooms. It did feel like some of the seating had been added as an afterthought though. 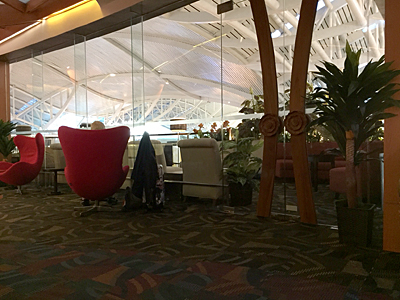 There was also an outdoor terrace. Well, a terrace that was outside the lounge but still under the roof of the airport terminal, as in Galleries First at Heathrow.  It didn’t look very appealing. 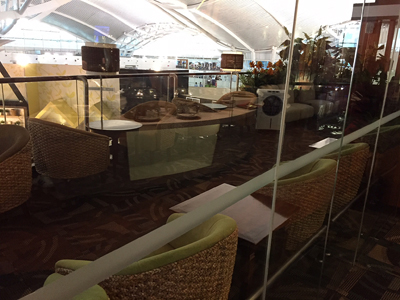 There were no window views of the runway but some natural light entered via the lounge and terminal ceilings.

The red sofa I was sitting on was comfortable but showed signs of wear and tear. There was a small integrated table mid way around the sofa which also looked worn and well past its best. Sockets for multiple plug types were situated at floor level but were not obvious at first.  Wifi login was straightforward and internet speed seemed ok for standard surfing although I didn’t try any streaming.

There were only two flight information screens throughout the whole lounge, one of which was broken.  There was also one television showing French football.

The food and beverage offering was a vast improvement on the previous Indonesian lounges I’d visited although that is not a high benchmark.  There were two tables of buffet food and drink: 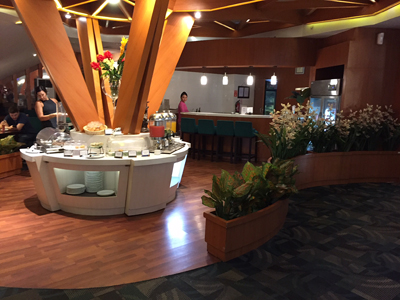 The buffet offered orange or guava juice, coffee and a small selection of teas including Liptons, Earl Grey, Green and Peppermint blends. 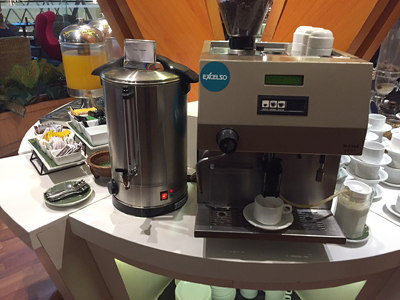 There was a fridge on the right with coke, sprite and strawberry-flavoured Fanta, which is very very wrong.  Tucked away at the bottom was the only beer available – Anker lager. It’s Swiss apparently… 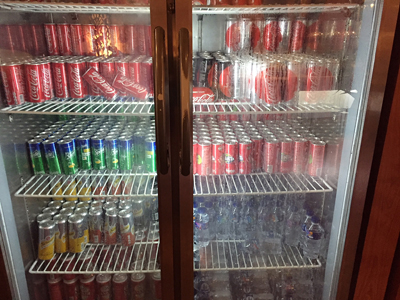 There is also a bar in this part of the lounge. It is so unassuming that Ithought it was just a counter to sit at as there was no alcohol on view. On closer inspection I discovered that you can get an alcoholic drink here. As far as I could see there was one red wine and one white wine and a very limited choice of spirits. Don’t expect them to be able to rustle up your favourite cocktail anytime soon.

The food choices were surprisingly varied and spread out between the two buffet areas.  There was a selection of sandwiches (beef, chicken burger, egg mayo), assorted canapés (unknown content but tasted ok) and a traditional Indonesian snack called Dadar Gulung (a rolled pancake with coconut). 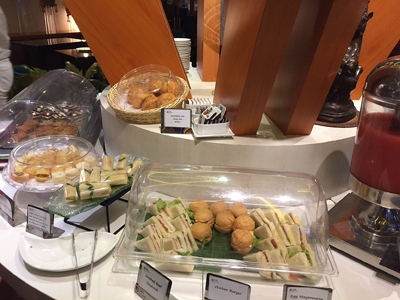 There was a small salad bar, pasta salad and fresh fruit (papaya and pineapple) located on the second buffet with some of the hot dishes. 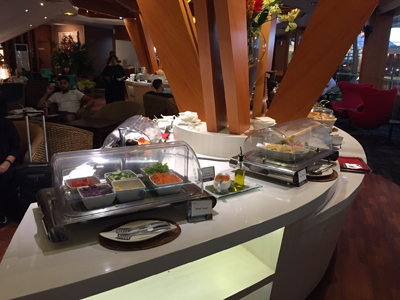 This table also possessed the most impressive thing in the lounge – a plate of Salak Bali or snake skin fruit. 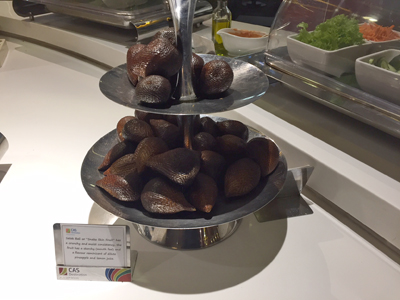 These local grown fruits looked very cool and did indeed feel like snake skin! The skin peels away quite easily to reveal a sweet and textured fruit that is unlike most fruits we get in the UK. If you get the chance, do try it.

Finally, there was banana cake and black forest gateau.

I didn’t have any interaction with staff in the lounge apart from at the entrance desk but there were several around and they looked busy. When I entered I noticed the sandwich display case was almost empty. Five minutes later it had been fully replenished so they were doing their best to keep guests satisfied. Also to their credit, the lounge was clean and tidy.

However I do need to mention the toilets. My notes say manky and tatty. They were beyond a good deep clean and in need of a swift refurbishment. I always consider the quality of the toilets to reflect significantly on the quality of the establishment and I was shocked by the poor state of these. There was also a shower available. I didn’t see it, but would suggest using it at your peril if the loos are anything to go by.

Overall, I have mixed feelings about the Premier Lounge at Bali / Ngurah Rai International Airport.  It didn’t have the best ambience and was in need of some renovation – and the toilets were awful.

I enjoyed the food and the soft drink choices were acceptable. However, alcoholic beverages were limited in scope.  I must admit I expected better considering Qatar Airways (and many other airlines) send their premium passengers to this lounge which is located in a popular tourist destination.