The first of the refurbished Virgin Atlantic A330-200 aircraft is now in operation.

I was meant to see this aircraft at 7.30am yesterday morning at Gatwick.  Unfortunately (or not, because I got an extra few hours in bed) problems with another aircraft meant that it was pressed into service the night before.  This means that you will have to rely on these publicity pictures.

A quick reminder of the background to this saga:  Virgin Atlantic is one of the airlines hardest hit by the engine problems which have befallen the Rolls-Royce powered Boeing 787-9 fleet.  When Air Berlin went bankrupt late last year, its A330-200 long-haul fleet was suddenly available for lease.

Virgin Atlantic jumped in and signed a four year deal on four aircraft.  This has allowed it to maintain its flying programme and, once the 787-9 issues are over, will even give it some interesting options for expansion.

We have flown the Air Berlin aircraft a couple of times in Business – here is a review.   It is a seat layout I like – all seats face forward (unlike the traditional Virgin Atlantic angled layout) with your feet slotting into a cubby hole under the seat in front.

This seat map makes it clear (click to enlarge):

I tried it, and I liked it

Back in June, I flew this seat from Manchester to Atlanta with Virgin Atlantic.  Here is my review.  Whilst the seat was, frankly, a bit knackered after years of Air Berlin service, I preferred it to the standard Upper Class seat.

Virgin Atlantic had committed £10m to a full refurbishment of these four aircraft.  Six months on, the first plane entered service earlier this week and the rest will follow over the next few weeks.

This is what you will get (these are Virgin PR pictures but I hope to take a look myself soon):

In Upper Class, in seat mode: 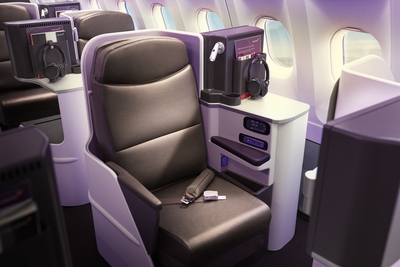 In Upper Class, in bed mode: 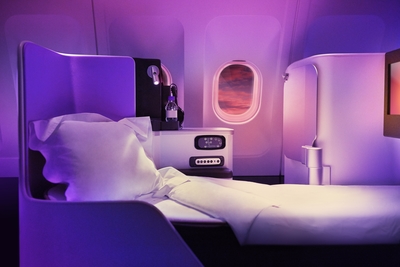 “All suites feature direct aisle access and enhanced surface area for additional personal space.   All trim and finishes, including the seat fabric with natural and soft Espresso leather, were selected by Virgin’s in house design team to underline the cabin’s distinctive Virgin Atlantic flair. Customers can continue to choose the perfect suite – including Love Suites, Corner Suites and Freedom Suites, which have been a huge hit with our customers since being introduced earlier this year.”

The seat layout is identical to the old Air Berlin seats.  Virgin Atlantic had no choice here.  A new seat would have required new safety certification which would have taken over a year.  By simply taking the existing footprint and seat mechanics and building an entirely new seat on top of this, it has been able to move quickly.

The Air Berlin aircraft did not have Premium Economy (simply called Premium by Virgin Atlantic) so this is an entirely new product.

There will be 35 seats in a separate cabin.  Seat pitch will be 38 inches.  This is how it looks: 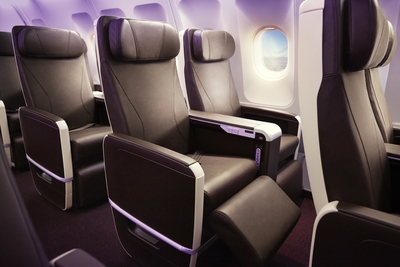 In Economy, Virgin Atlantic has retained the original seat frames but given them a full makeover.

Irrespective of cabin, all seats have power sockets and access to wi-fi.

Where can I find these new seats?

The plan is that the refurbished Virgin Atlantic A332 fleet will fly the Caribbean routes and, from Manchester, on the US routes.  The logic seems to be that these flights have fewer Upper Class passengers and are more likely to have couples who will be happy with the ‘Love Seat’ centre pairs.

All four planes are due for completion by the end of January.

I am positive about this development.  My personal view is that the traditional Virgin Atlantic Upper Class layout has had its day.  It was trailblazing when it was launched, but the fact that no other airline except Air New Zealand copied it tells the story.

Whilst I genuinely have no idea what is going on, I am also given constant hints that the new A350 aircraft being delivered next year will see something different.  I was at a lunch with Virgin’s CEO, Craig Kreeger, yesterday and he repeated this line.  It may all be hype but I do think that Virgin Atlantic is on the cusp of a major step-change in their Upper Class product.

Whilst we wait for that, I think anyone who ends up on the ex-Air Berlin fleet with these new Upper Class seats will be perfectly happy.  Hopefully I can take a look in person before too long.

How to earn Virgin Points from UK credit cards (September 2022)