This is our review of Virgin Atlantic Upper Class on the A330-200 fleet.

A couple of weeks ago we wrote about the refurbishment that Virgin Atlantic is about to undertake – at a cost of £10m – on the four A330-200 aircraft it has leased from the remnants of airberlin.  This move is a response to the engine issues that Virgin is having with its Boeing 787-9 Dreamliner aircraft.

The refurbished aircraft will begin to appear from November.  There will be a new improved version of the existing airberlin seat: 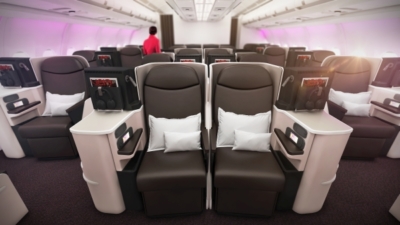 …. and the introduction of a Premium Economy seat, based on the one currently used by Singapore Airlines.  Virgin Atlantic has put in a lot of effort given that we are only talking about four planes.

The ex-airberlin planes are mainly being used on the Caribbean routes.  The one exception is Manchester to Atlanta. The middle pair of ‘love suites’ (as Virgin has rebranded them) are best suited to couples and these are primarily leisure destinations. From next year the aircraft are also scheduled for other North American routes from Manchester.

Virgin Atlantic had offered me a flight to Atlanta if I wanted to try out the ex-airberlin Upper Class product.  This didn’t really suit my schedule until the invitation from Hilton to visit their HQ in Virginia arrived.  I decided to kill two birds with one stone, flying from Manchester to Atlanta on Virgin Atlantic and taking a Delta connection (booked via an Amex Membership Rewards transfer) from Atlanta to Washington DC.

Virgin Atlantic has a special A330-200 page on its website here.

On board the Virgin Atlantic A330-200 in Upper Class

I covered the Upper Class lounge provision, which is fairly woeful, at Manchester in this article.  As an Upper Class passenger I did at least get to avoid the security queue in Terminal 2 which did not look pleasant, even early on a Sunday morning.

Whilst construction of the new pier continues, a number of flights are departing from what can politely be called a shed.  You need to go up a lot of stairs, down a corridor (over the tarmac) and down into the shed.  If you’ve ever flown into some of the ropier Ryanair airports – looking at you Luebeck and Treviso – then you will feel at home.

Once boarding commences you have another long stroll before walking up the steps of the plane.  The upside is that you can get some good photographs: 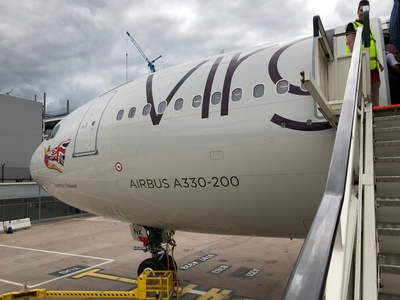 I have flown airberlin twice in Business Class (reviewed here) and Anika has done it once (reviewed here).  We were positive about it although the obsession with sprout-based food always alarmed me!  Apart from changing over the IFE, Virgin Atlantic has done nothing on the cabins so far.  All of the signage, for example, is in German with the English translation underneath.

This is the ‘artists impression’ version of the current Upper Class cabin from the Virgin Atlantic A330-200 website which you can compare with the new seat image at the top of the page: 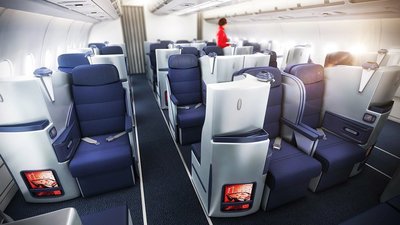 Never in a million years can you get as smart a picture in real life.  There are four seating options available: 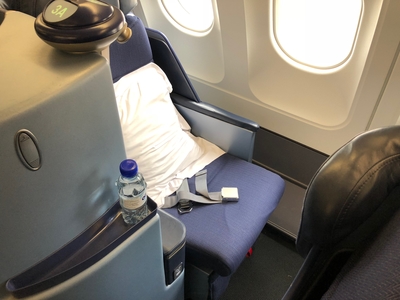 The seat above is 3A, where I sat. Virgin calls this a ‘solo corner suite’.  This is my preferred choice – directly next to the window and with direct aisle access.  In alternate rows, the seat is next to the aisle and your view towards the window is restricted as you can see from the official Virgin image.

This is a middle pair of ‘love suites’: 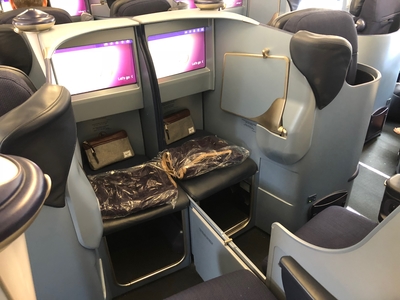 Below is your fourth option – a solo seat in the centre block.  This is known as a ‘solo freedom suite’. 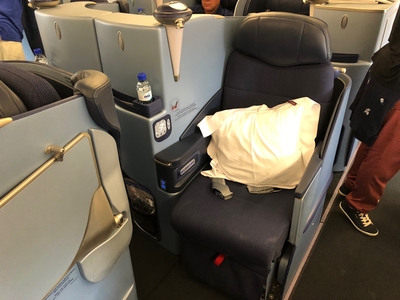 Unlike Club World, there is direct aisle access to all seats so you are not climbing over anyone and no-one will be climbing over you.

This is the view you see from your seat if you take 3A: 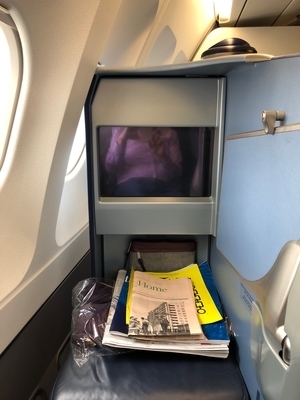 The first thing I noted was the lack of storage space – I ended up stuffing my newspapers, blanket etc into the gap between the seat and the curve of the fuselage.  There is, however, no shortage of overhead space as the A330-200 fleet has storage bins down the middle of the plane as well as down the sides.  It is basically one locker per seat.

To the right of the image you can see the tray table which is held up a catch. This swings down when required.  I found that the table did not come forward enough for my liking, and I had to sit forward in my chair during meals in order to get close to the food.

The seats are showing signs of wear and tear from the airberlin days.  This was most noticeable in a couple of deep scratches on the seat back (not visible in the photo above) and a missing drinks tray which had somehow broken off.  I assume getting parts for a second hand seat is not easy.

There was a bizarre feeling of deja vu from this seat.  The blue leather used is almost the same shade as British Airways had on its short-haul fleet until the current brown was introduced.  It feels like the big brother of pre-2016 Club Europe.

In terms of comfort, the seats is more than wide enough.  One change that Virgin is bringing in is that the armrests will sink down to form part of the bed when the seat is reclined – this means that, when fully flat, the seat from November will be even wider.  As I was on a day flight, I never got to try it in bed mode.

Another note about the bed:  because this is not your standard Upper Class seat, you can make it into a bed by yourself using the at-seat controls.  Upper Class seats in general require the cabin crew to make up your bed for you, because the seat is flipped over – the idea is that the fabric rear of the seat is more breathable than the leather seat and so more comfortable.

Virgin Atlantic provides toiletry bags, even on day flights, with the usual bits and pieces from Rituals – nothing special, but handy for future trips and the Herschel bags are good quality.  We were also handed a pair of the new Happy Socks, although unfortunately only size 36-40 had been loaded.

Whilst this wasn’t the traditional Upper Class seat, it was the typical Upper Class food and service.  I don’t have a lot of experience of Virgin crew, but Laura and her team did an excellent job on this flight and it would be impossible to fault them.

Champagne and crisps (why?!) were served before take-off.  Lunch options were:

Tomato and mozzarella carpaccio (picture below, this was very good) 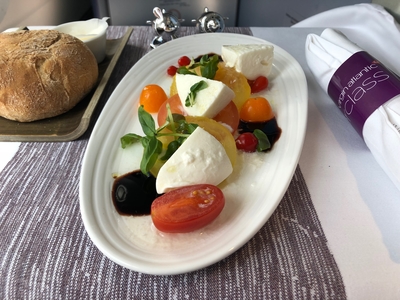 As you can see, presentation is of a high standard.  This was followed by a choice of: 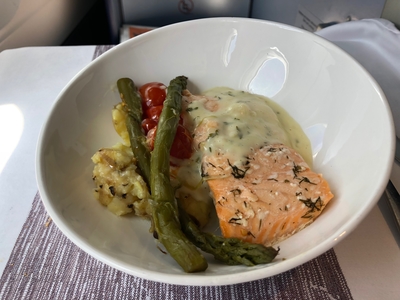 Dessert was a choice from lemon and blackcurrant sponge pudding (see below) or burnt sugar custard tart.  Cheese and port was also on offer if required. 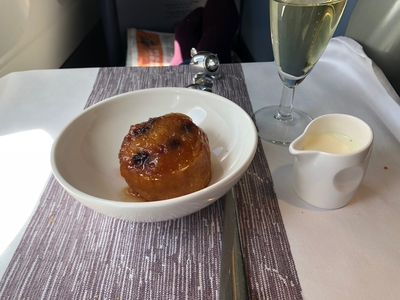 Overall, I was impressed.  It was as good as anything I have had in Business Class recently and considerably ahead of your typical Club World meal.

I ordered the scones and was persuaded to add a side order of Eton mess cake.  This was a sensible option as only one scone appeared, BA Club Europe-style.  (I miss those scones ….)

Wines and champagne are selected by Berry Brothers, which is a smart choice.  Champagne is Canard-Duchene (£25 via Majestic Wine) and the wine list was broken down into ‘classic’, ‘familiar’ and ‘discovery’ categories.  This being Virgin, there was also a cocktail menu as well as the traditional spirits and soft drinks.

Regular readers will know that I rarely bother with IFE and tend to use flights as an excuse to ‘properly’ read the newspapers and work through my magazine backlog.

The TV screen is a decent size, although clearly not market leading, and Virgin’s Vera entertainment system is well regarded.  I had a look at the film selection and was impressed – it is a broad selection (clearly not on the scale of Emirates) and also well chosen.  As well as new releases there was a good mix of classics from the 80’s and 90’s.  For no particular reason I decided to spend the last 20 minutes of the flights watching the beginning of Paddington 2 again, which I do recommend.

The aircraft have wi-fi.  I was given a voucher on boarding for 10MB of free data.  What I didn’t fully work out, because I didn’t read the small print, is that this was only valid for text messaging from within a small number of apps.  You can’t use it for anything else.  After about four hours (!) I figured this out and ended up paying £4.99 for 40MB (I think) of data in order to keep on top of my emails and the speed was good.

In part two of this Virgin A330-200 Upper Class review – click here – I want to address the million-dollar question – will customer satisfaction with the airberlin aircraft finally persuade Virgin Atlantic to dump its Upper Class herringbone layout?  Read on here …..