I was in Gatwick’s South Terminal last Thursday reviewing the new My Lounge lounge as you may have seen on Monday.  I was on my way to Barcelona to do a review for Marriott which will run in a day or so.

Flying early in the morning from Gatwick South meant flying Vueling, BA’s low-cost Spanish sister airline, as the BA flights departed too late for my schedule.

Last year we tried to review Vueling’s Excellence business class service.  I say ‘tried’ because Anika’s flight was moved to a charter aircraft and she was downgraded.  Since then, Vueling has dropped Excellence and I wanted to see what had replaced it. 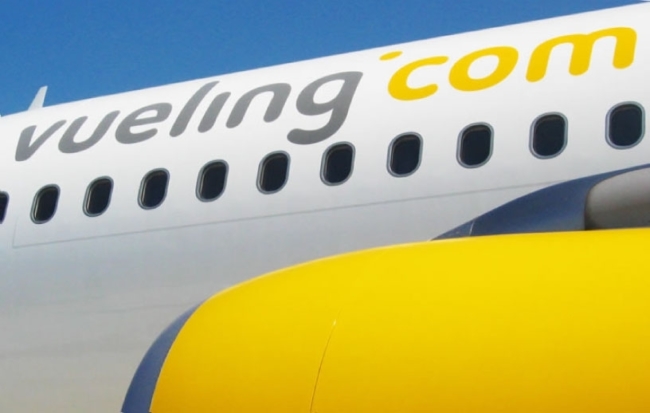 Last Summer I did a popular piece on trying to recreate the British Airways Club Europe experience on easyJet.  This seemed a good opportunity to try the same thing with Vueling.

What does it cost to recreate British Airways Club Europe on Vueling?

In the end, it came out at £64 for the one way trip to Barcelona.  You really can’t complain about that.

The base fare was just €32 (£29).  This came with a 10kg hand baggage allowance which was all I needed.  Unlike, say, Ryanair, at no point was my hand baggage weighed and at no point was I expected to fit it inside a measuring gauge.  The whole experience was very grown up.

I’m getting ahead of myself.  This is how I planned my ‘Club Europe lite’ trip.

€32 (£29) base fare – I will earn some Avios back in my Vueling Club account based on 4 Avios per €1, although this will be after some taxes are deducted

£15 payment for access to My Lounge at Gatwick South, which comes with use of the Priority Security lane – and I got 400 Virgin Flying Club miles back via this promotion

€4 (£4) for a coffee and piece of cake on board – to be fair, I would have needed to spend €10 to get nearer to a Club Europe meal experience

DOWNSIDE – Vueling sells the middle seat (and it was sold on my flight); no wardrobes; no checked baggage allowance

UPSIDE – far wider food selection on Vueling than BA; seat selection is included in the prices I quoted; Row 1 is not restricted to elites (as long as you pay up) as it is on BA; boarding is via air bridges at Gatwick and Barcelona (unlike some low cost carriers)

Let’s look at how each part of the package performed in practice:

Here is a handy tip.  Premium Security – bookable here – costs £5 per person at Gatwick South.  However, for £15 I booked myself access to the new My Lounge (reviewed here) via this Virgin Atlantic deal and this comes with premium security for free.

If you have a Priority Pass or other lounge access card, you can use the No 1 Lounge at Gatwick South.  This lounge is usually full at peak times, so you should reserve your No 1 Lounge visit for £5.  This £5 reservation payment also gets you access to Premium Security.

At 7.30am on a Thursday, Premium Security was TOTALLY empty.

I wrote about My Lounge Gatwick South in my review yesterday.

It clearly isn’t the same scale as the British Airways lounges in Gatwick South which we reviewed here, which are arguably better than those at Heathrow but it did the job.

Subject to capacity I could also have used my Priority Pass (free with my Amex Platinum charge card) at No 1 Lounge Gatwick South, reviewed here.

On British Airways I would have boarded in Group 1 as a Club Europe passenger.

Vueling also let me board in Group 1 as I paid €17.99 for a Row 1 seat.  Only about 5-6 people had Group 1 boarding.  This was VERY well policed by the Vueling staff who were throwing out people trying to sneak through.

On landing I was first off the plane and, as Vueling used a jet bridge, I was the first person at passport control.

Take a look at my Vueling leg room which is totally on a par, if not better, that BA Club Europe in the bulkhead.  You should also remember that you generally need to be BA Gold to book Row 1 in Club Europe whilst Vueling offers it to anyone who is willing to pay. 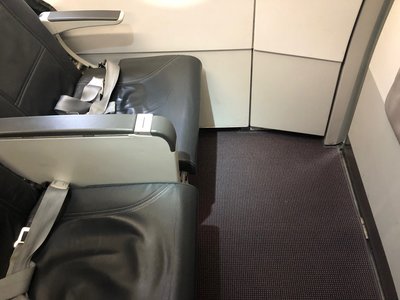 Unlike some easyJet and BA aircraft, there was a bulkhead in front of Row 1.  It had a window in it, which was a novelty: 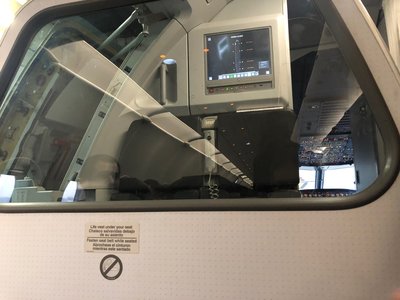 The difference between BA and Vueling is that 1B was filled.  There was no fighting over the armrest, however, as the petite woman in 1B was leaning on her partner in 1A.  Due to the curve in the fuselage, 1A looked a bit tight although you obviously got a window.  I was very happy in 1C.

Take a look – it is a decent amount of space: 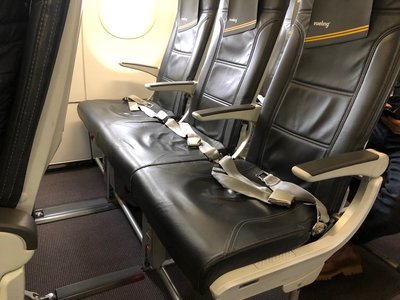 The upside of Vueling is that you get a far wider variety of food and drink than you would get on British Airways Club Europe.  It is not as good, but there is more choice.

There were no easyJet-style bacon sandwiches for breakfast from the Spanish, not surprisingly.  Options included a €4.50 ‘mini sandwich’, €6.50 for a club sandwich (€9.50 as a meal deal), €4 for coffee and a snack (Kit-Kat, piece of cake, waffle etc) etc.  The most interesting options were a meat-based tapas box and a pulled pork sandwich, both at €7.50, but I’d already had two breakfasts by this point – one in the Hilton Gatwick’s lounge and one in My Lounge.

For comparison, pictured below is the Club Europe meal I got from British Airways on my return flight.  In typical BA fashion, I was offered a choice of a salad or a different salad – and both were served with a side salad.  I’m not joking: 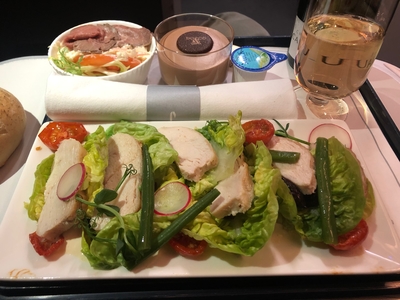 It was tasty though, so you’d need to buy one of the more premium Vueling options to get close to this quality.

Arguably you should add another £7-£8 for a bottle of prosecco and one of the posher food options if you want to recreate Club Europe catering.

I earned back 400 Virgin Flying Club from my lounge booking and probably 50 Avios from Vueling.  Spookily for Vueling, the flight was on time too.

The next day I flew back on British Airways Club Europe in the same seat, 1C.  It was an Avios redemption which cost 15,000 Avios plus £25.  I had an empty middle seat and my meal was decent as you can see above.  It was obviously better than my DIY Vueling ‘business class’ package, but I would happily do Vueling again if I could get the same seat.

As I wrote when I did my easyJet piece last year, the low cost carrier experience does not need to be low quality if you, erm, spend more money so that it isn’t so low cost any longer …. but £64 is not exactly expensive for everything I got.