A few days ago I wrote about the aggressive business class fares from London to Seoul offered by Air France and KLM.  You can get as low as £1329 return for much of the year.

Having had a dig, it seems that this is not the only good offer out there.  Based on flights from London – although you can also get similar fares from KLM’s UK regional airports – I can see:

These are the lowest fares for 2019 found when searching on klm.com and using the default departure period of ‘Between now and January 2020’.  It is worth noting that these fares are widely available throughout 2019. 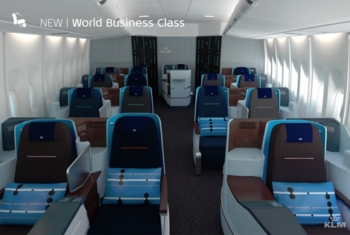 These flights need to be credited to a SkyTeam frequent flyer programme such as Flying Blue or Delta SkyMiles.  However, if you are travelling from April onwards it is possible that you will also be able to credit them to Virgin Flying Club – it depends on the official start date for the new Virgin / Air France KLM joint venture.

Look at reviews of the plane you will be using before booking, as Air France still has some with sloping beds in Business Class.  I believe that KLM is now fully flat on all aircraft – see an example seat below.

Your best option to maximise your miles when paying is American Express Preferred Rewards Gold.  This offers double points – 2 per £1 – when you when you book flight tickets directly with an airline.  Our review of Amex Gold is here.

Have a play around at klm.com and see what you can find.

How to earn Flying Blue miles via UK credit cards

As a reminder, Air France and KLM do not have a UK Flying Blue credit card.  However, you can earn Flying Blue miles by converting Membership Rewards points earned from selected UK American Express cards.  These are: