This is part two of my review of Air France business class, flying a Boeing 777-300ER from Paris to Dubai.

As regular Head for Points readers will know, Air France and KLM will become Virgin Flying Club partner during 2019.  I thought it was worth giving Air France a try to see what it offers if you choose to redeem your Virgin Atlantic miles with them. 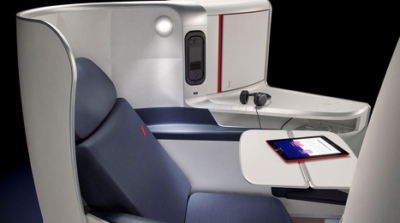 Before take-off I was given a glass of Joseph Perrier Cuvee Royale Brut champagne.  This is not a brand I was aware of – it sells for around £35 in the UK.

Air France works with Anne-Sophie Pic on selected food items.  Pic runs the acclaimed restaurant at the Four Seasons hotel at Tower Hill and is the only female chef with three Michelin stars.

It is worth noting at this point that I have seen comments online that Air France adjusts its food quality depending on the route.  The implication is that competition from Emirates and Etihad to the Middle East means that it operates at a higher level than you might find elsewhere.

First up was this appetizer, described as ‘anchovy pie with a twist’.  It was tasty but confusing, and definitely lacking in pie! 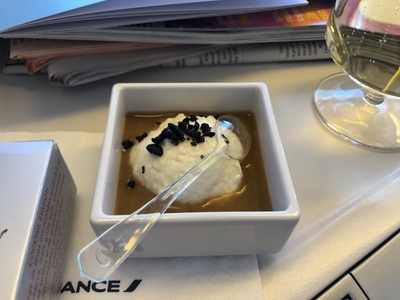 The main meal was served on a plastic tray which will always give a bad first impression.  It never feels as classy.  What see you below is salmon marinated in mandarin orange, fregola pasta salad and pickled butternut squash, served with a mixed green salad with toasted pine nuts. 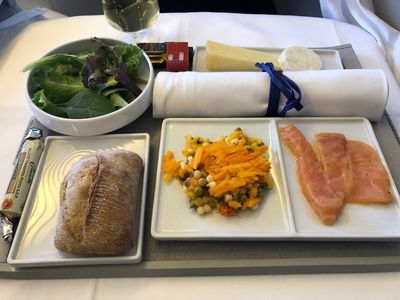 Air France does do excellent bread, perhaps unsurprisingly, although when I was offered a 2nd roll they had a bit of a panic when I asked for a 2nd tube of – very smart looking – butter!

There were four choices of main.  You can also pre-order a different main if you wish from a selection online.  The options were:

tender beef and a variation of carrots

The last two are ‘suggested by Anne-Sophie Pic’.  I went with the chicken, however: 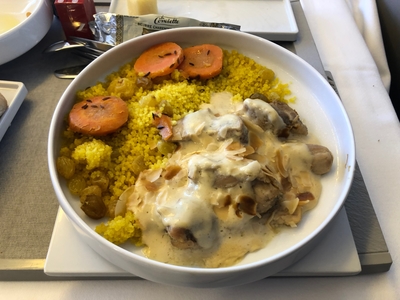 I admit that this doesn’t look too great in the photo, but it was very well put together by someone who understood how to mix flavours and textures that work well at altitude.

Dessert was listed as ‘lemon choux pastry puff, raspberry dome, Valronha tatin chocolate amuse bouhce’. I thought there were three options, but it was actually one plate: 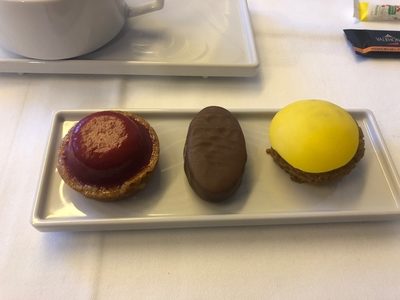 with the alternative being a fruit salad.

There was also a cheese course which I passed on.

Before landing there was a fairly uneventful light snack of a wrap.  They could have done more with this: 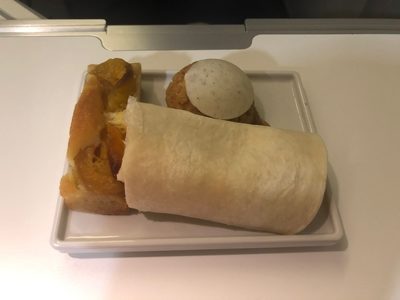 Regular HFP readers will know that I am not an fan of IFE.  My idea of a good flight is to collect together all of the magazines that are sitting around my house unread and to plough through them in one multi-hour session!

For research purposes I did try out the IFE.  The English-language selection was weak – not surprising, given that I imagine a large percentage of Air France flights are between two non-English speaking countries – but the TV was a decent size given that it is fairly close to your face.

The TV is angled away from you when stowed, as you can see below, but pops out on a hinge when you want to watch: 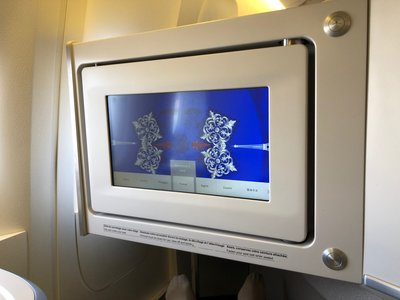 The headphones were good with one quirk – they seemed to be hard-wired into the red storage cupboard next to the seat.  There was also a small screen on the remote control for anyone who wanted to watch on that instead: 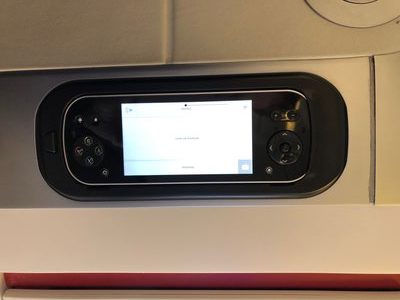 I enjoyed my Air France business class flight.  The seat size and privacy, combined with the high quality food, made the seven hour flight time whizz by.

Apart from the lack of wi-fi, the only downside was the decision by the crew to turn off the cabin lighting for much of what was a day flight.

As I wrote in Part 1, the problem with Air France business class is that only 51 of its 101 long haul aircraft have this fully flat, aisle access seat.  I think I would struggle to recommend the ‘angled lie flat, 2 x 2 x 2’ version found elsewhere, especially as you need to change in Paris as well.

Air France and KLM – I hope to try KLM soon too – will be a great addition to Virgin Flying Club when they are available for redemptions later in 2019.  We can only hope that the mileage and taxes required are reasonable, because this has the potential to be a game changer for Virgin Atlantic’s frequent flyer programme.