This is my review of Air France business class, flying a Boeing 777-300ER from Paris to Dubai.

As regular Head for Points readers will know, Air France and KLM will become Virgin Flying Club partners during 2019.  I thought it was worth giving Air France a try to see what it offers if you choose to redeem your Virgin Atlantic miles with them.

My earlier articles in this series cover (click to read):

the SkyTeam lounge in Heathrow Terminal 4

I paid for this one-way flight, which started in London, using 42,500 American Express Membership Rewards points, transferred to Delta SkyMiles.

Air France is, seat-wise, a mess

Air France KLM has recently hired a new CEO, Ben Smith, who was previously at Air Canada.  I think he is first non-French national to hold the role.

Smith is not wasting time.  He was scrapped Joon, the silly spin-off airline which was meant to appeal to millennials.  The short-haul Hop subsidiary has also been given the chop.

Next up is his plan to sort out Air France’s premium seating.  To use figures Smith gave in a recent interview, only 51 of the 101 Air France long haul aircraft have the latest lie-flat seating with direct aisle access.  This means the 44 Boeing 777’s and the seven Boeing 787 planes.  The rest of the fleet, even the new A380 aircraft, have angled lie-flat seats and usually 2 x 2 x 2 seating.

(BA has zero long-haul planes where every business class seat has direct aisle access, of course, but at least every seat is fully flat.)

If you are going to redeem on Air France, make sure that you are getting the latest product which is what I cover here.

Here are some PR pictures of the current seat: 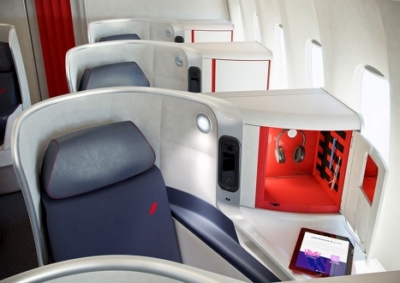 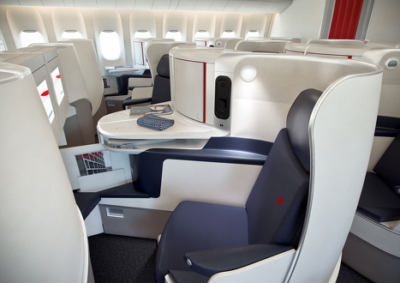 This is the Safran Seats (ex Zodiac Aerospace) ‘Cirrus’ seat.  A version of this seat is used on the American Airlines Boeing 777-300ER which I reviewed last Autumn.  Cathay Pacific also uses it on its Boeing 777-300ER and A350 fleets. 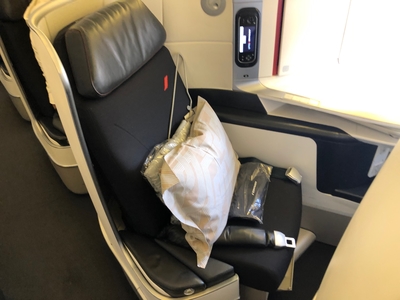 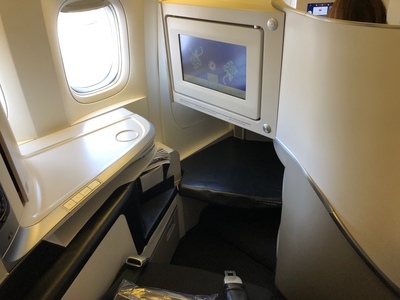 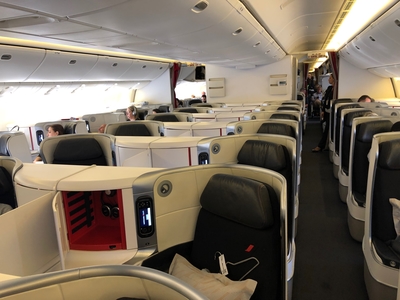 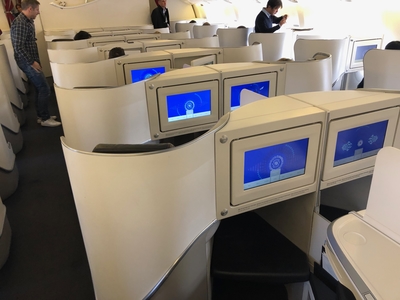 Here were my first observations, many of which are common to my American Airlines review:

all seats are forward facing – perhaps a statement of the obvious, but not necessarily if you a long-term BA flyer

your feet have quite a bit of space – whilst they are under the back of the seat in front, it is not a tight cubby hole (see picture below) 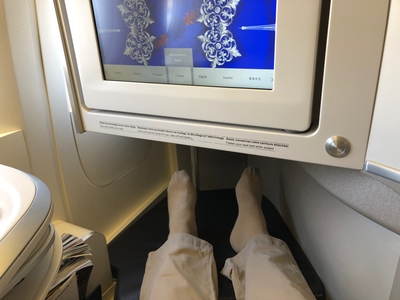 there is decent ‘side privacy’ – if you look at the image below, which is me looking to my right, the person to the side of me is partially hidden 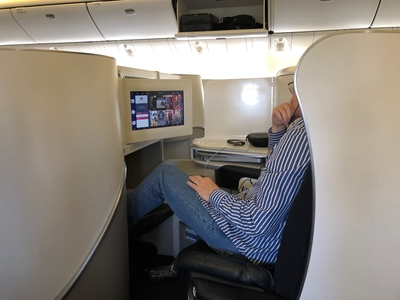 The only people who will not like the seating are couples who want to chat, as even in the middle pair of seats you cannot see the face of the person next to you.

The seat appears not to have an arm rest on the aisle side but this is not the case.  There is one but it is sunk into the seat.  If you give it a push it pops out and can be raised up.

What you DON’T get is wi-fi.  If connectivity is important you will need to look elsewhere.

This is everything I like about a business class seat – storage, privacy and space.  The only thing that was a little odd was the similarity to the American Airlines seat which was the previous HFP review I wrote, although I have flown (but not reviewed) SWISS business and Etihad business with my family since then.

This was a day flight, so I can’t comment on how good the bed is for sleeping.  I put it flat for a period to try it out and it felt fine for my 6’2′ frame but that’s not the same as trying to get eight hours sleep.

One criticism I had of the crew is that they did try to enforce sleep.  We left Paris at 1.30pm and landed in Dubai at 11.25pm, which is 8.25pm Paris time.  This is, by any standards, a day flight and yet the crew decided to turn off the cabin lights for two hours.  This was just stupid in my view. 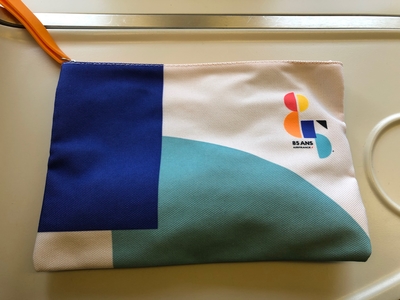 The contents did not quite live to the packaging.  There was a toothbrush and toothpaste, a pen, a comb and some earplugs.  The best bits were a miniature Clarins moisturiser and hand cream which went home to my wife.