Etihad Guest, the frequent flyer programme of Etihad Airways, has a rather eclectic mix of airline partners on which you can redeem your miles.

I wrote about these partners here.  At the time, the sweet spot was a 36,000 miles business class return trip on Brussels Airways to New York.  This flight was virtually unbookable, however, and Etihad has now increased the mileage required to 88,000 miles.

There is another sweet spot on the Etihad Guest partner reward chart from Europe.

Czech Airlines is an Etihad Guest partner.  Czech Airlines has a grand total of one long haul aircraft which it uses to fly to Seoul, South Korea, four times a week.

This isn’t such a crazy move as you might imagine.  Czech Airlines is a member of the SkyTeam alliance, as is Korean Air.  Czech and Korean both fly from Prague to Seoul and Czech Airlines customers can connect to other Korean Air flights to get to other destinations in Asia. 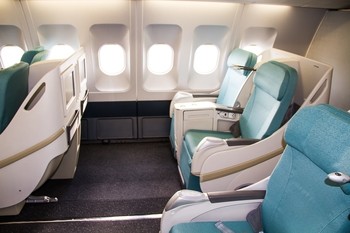 The Czech Airlines flight to Seoul is very cheap and bookable.

As you can see on the Etihad Guest website, a one-way flight in Business Class between Prague and Seoul will cost you just 25,610 Etihad Guest miles.

To put this in context, a one-way Club World flight on British Airways between London and Seoul will cost you 75,000 Avios off-peak and 90,000 Avios peak.  This is a huge saving – you also save £250 return on the taxes and charges which compensates for the need to route via Prague.  And potentially spending a day in Prague at the start and end of your holiday is not exactly a major hardship …..

Etihad Guest members appear to have access to the same reward availability as any SkyTeam member airline.  You can use the KLM website to search for availability and I would recommend this rather than trusting what Etihad tells you.

You can only book your flights, in either direction, for a Saturday, Sunday, Tuesday or Thursday.  These are the days on which Czech Airlines operates the flight – the other Seoul flights are codeshares operated by Korean.

You need to ring Etihad Guest to book, unfortunately.  I think that the Manchester call centre has now closed and that it diverts to Serbia, but don’t quote me on that.  If the KLM website is showing seats as available and the call centre agent cannot see them, hang up and call back.

The total cost per person of a return business class reward flight from Prague to Seoul is 51,220 Etihad Guest miles plus, based on reports, around £350 in cash for taxes and charges.  This is almost 100,000 miles cheaper (130,000 on a peak day) than using Avios.

From Seoul, it is easy to get connections elsewhere in Asia.  You could get Avios redemptions on JAL to Tokyo, on Cathay to Hong Kong or to Kuala Lumpur on Malaysia.

The Czech Airlines seat on its A330 plane is pictured above.  The seat is fully lie-flat with a huge amount of legroom, although the 2 x 2 x 2 seating means that it may be more attractive to couples than solo travellers.  The aircraft is actually an ex-Korean Air one which has been leased to Czech Airlines.

More details on this redemption, and Etihad’s other airline partners, can be found here.

How to earn Etihad Guest miles via UK credit cards

As a reminder, Etihad no longer has its own UK credit card.  However, you can earn Etihad Guest miles by converting Membership Rewards points earned from selected UK American Express cards.  These are: