This is my review of the Hotel Indigo in Glasgow.

I had a one night stay in Glasgow last week and decided to give IHG’s Hotel Indigo a try.  I needed a 3rd IHG brand to trigger 19,200 bonus IHG Rewards Club points via the current promotion and this seemed like an interesting option.

I had never spent the night in a Hotel Indigo before, although I did a couple of £49 mattress runs at London Paddington a few years ago!  IHG sees Indigo as its upmarket lifestyle brand.  I like the concept, with modern design often mixing – as it does in Glasgow – with the shell of a historic building.

This is not a detailed review, because I didn’t eat in the hotel.  I had also booked the one and only suite (at just £127 in the recent flash sale, it seemed daft not to pay the extra few pounds over a standard room) so my room is unlikely to be your room. 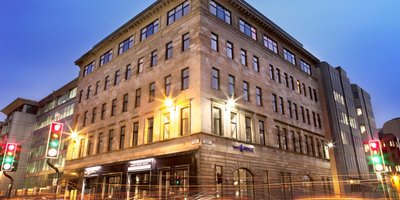 Where is Hotel Indigo Glasgow?

The location is amazingly central.  It is about a 2-3 minute walk to Glasgow Central railway station.  The airport bus runs along the same road (Waterloo Street) on its way to the airport and on the parallel road on its way into town.

If you are arriving by train at Glasgow Central, leave the station by the side entrance to the left by M&S Simply Food.  Keep walking forwards, across the road and passing Nando’s, and the hotel will shortly be on your left.

Despite the central location, the location is oddly static.  All of the neighbouring buildings are office blocks so it doesn’t actually feel as though you are in the middle of things even though you are.  It does ensure that the area around the hotel is quiet in the evening.

Hotel Indigo Glasgow opened in 2011 in an 1892 building which was apparently a power station, although the facade looks like an office block.  It has 94 rooms.

The ground floor (stock photo below) shows the lobby and bar.  Tucked around the corner is a Marco Pierre White restaurant.  This was surprisingly busy for a Monday night, and the majority of diners did not appear to be hotel guests. 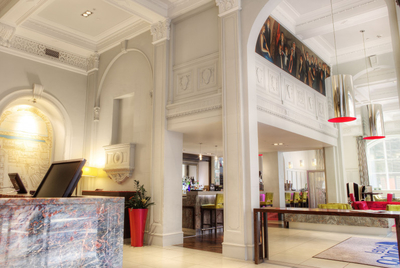 Check in was friendly and efficient.  Here is one thing to note: I was offered 600 bonus points or a welcome drink as my Spire Elite amenity.  I assumed it would be ‘drink and snack’ as is usual at a Holiday Inn, but it turned out the Hotel Indigo policy is just a drink.  Once I got to the room it turned out that my free mini-bar had a small bottle of wine in it anyway.  In retrospect, I should have taken the points this time ….

The corridors were classily done, although there was a worrying wobble in the floor on the way to my room: 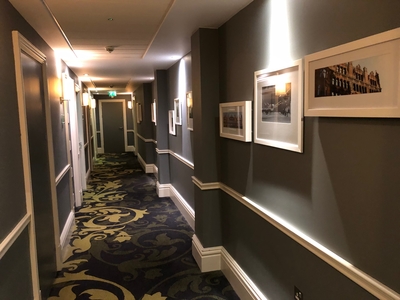 The suite was on the fifth floor in a new glass box tucked onto the roof.  This meant that there was a huge amount of light.   This was certainly not the biggest suite I’ve ever had – the website says it is just 34 sq m and I can believe that – but it felt bigger with the wrap-around glass walls. 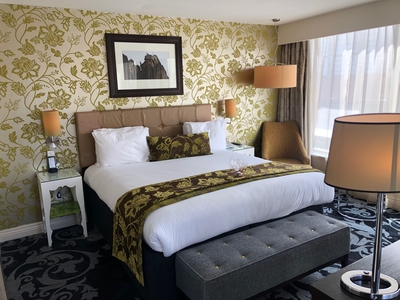 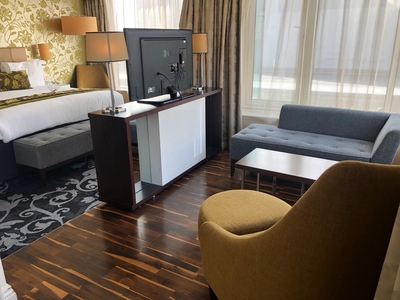 The free mini-bar included – and this is just a sample – a small bottle of wine, water, diet coke, crisps and a Tunnock’s caramel wafer!  A complimentary bag of fudge was also waiting for me on the bed.

The bathroom was smaller than I expected.  There was no bath, just a large rainfall shower.  There was only one sink.  The toiletries are advertised as Aveda but were actually branded The Scottish Fine Soaps Company. 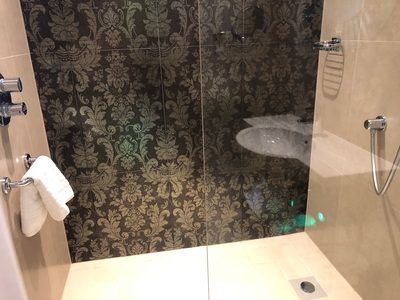 It is worth flagging up that the little balcony outside the suite, which you can’t access, was popular with the local bird population which did get a little noisy at times: 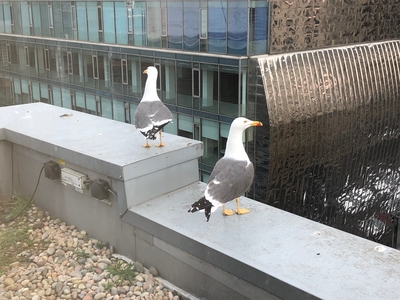 There’s not much else to add.  I ate out, although I did sit in the bar with my free glass of wine for half an hour, and it felt a suitably classy place.  The number of people in the restaurant on a Monday implied that this is one of the better options locally.

I didn’t stay for breakfast since I knew I would have time to eat in the airport lounge, and Hotel Indigo does not offer free breakfast to IHG elite members.  There is a small fitness room in the hotel but I didn’t visit.

If you need somewhere to stay in Glasgow city centre then I am happy to recommend the Hotel Indigo.  The rooms are stylish, the staff are pleasant, the hotel isn’t too large at 94 rooms and it is convenient for the airport bus and the railway station.  If you can get the suite for a modest premium and intend to spend time in your room then it is decent value.  What more do you need?

You can find out more, and book, on the hotel website here.