After more than a decade without business class on its short-haul aircraft, Aer Lingus has decided to introduce AerSpace, a halfway house between what you get from British Airways Euro Traveller and Club Europe.  It will be available from 1st September 2019.

Don’t confuse AerSpace with the earlier announcement that Aer Lingus will be flying some of its new long haul A321LR aircraft on short haul routes.

The A321LR aircraft, arriving this summer, will feature 16 fully flat business class seats and will be flying some European routes to keep the aircraft busy during the day before an overnight trip to North America.  Dublin to Heathrow on a flat bed sounds good to me, but only a handful of daily flights will get this service. 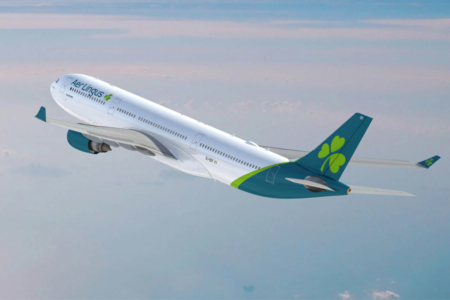 AerSpace is being added to the existing Aer Lingus short haul fleet which only has standard seating.  It is basically a copy of Vueling’s ‘Excellence’ product which was dropped last year.  This means that the key in-flight benefit is an empty middle seat in line with British Airways and most other European legacy carriers. It is unclear whether Aer Lingus will install a middle-seat table, like on BA.

Importantly, it appears that there will only be one row of AerSpace – the front row.  It will be capped at four seats per aircraft.  Air Lingus has not officially announced this but the booking system only lets you buy four seats and the seat map only shows the first row as having missing middle seats.

What other benefits do I get with AerSpace?

It’s not just about an empty middle seat – although it almost is!  As you would expect, AerSpace also comes with:

The food is the biggest difference between AerSpace and Club Europe, since British Airways has separate catering for Club Europe customers.

Not all routes will feature the product.  So far it has been confirmed for the following:

….. as well as a variety of European destinations out of Ireland – see the Aer Lingus website here for the list.

What miles and points will I earn with AerSpace?

It is not clear if AerSpace will be bookable with Avios.

My guess is that the introduction of the new AerSpace product is to offer a slightly more cohesive product when the A321LR aircraft arrive.  Given that passengers transferring to A321LR short haul services will get a flat bed seat, Aer Lingus needs to do something for those who end up transferring to standard short haul aircraft.

As Aer Lingus continues to grow its long-haul routes it will become increasingly reliant on passengers who are starting their flights outside Ireland and it makes sense to offer a more cohesive product for those willing to pay for it.

You can learn more about AerSpace on the Aer Lingus website here.

Want to know more about redeeming Avios on Aer Lingus?

This HfP article shows you everything you need to know about how to redeem Avios points on Aer Lingus which can lead to substantial tax savings when flying to North America.