IHG has just opened a new InterContinental in Lyon.  It is surprising it has taken this long given that Lyon is France’s 2nd largest metropolitan area and has significant banking, chemical and pharmaceuticals industries.

The new hotel occupies a building that was, until 2010, the striking Hotel Dieu hospital complex on the banks of the Rhône.  Looking at the photographs, it is a shame they don’t build hospitals like this any more!

The hotel has 144 rooms, 34 of which are split-level ‘Duplex Suites’ with views across the river.  There is also a 150sqm presidential suite.

Amenities include a 1,500 sq m convention space as well as 12 meeting rooms. There is also a spa with gym, hammam and sauna, as well as a restaurant specialising in Lyonnaise dishes.

The 32 meter high dome, formerly a chapel, has been turned into a magnificent bar.  There is also Club InterContinental lounge. 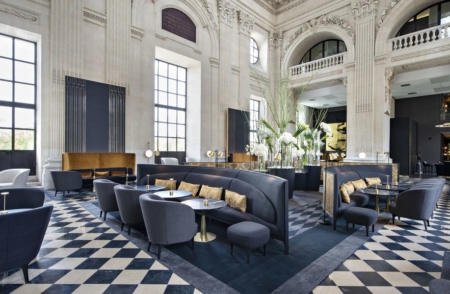 This looks like the sort of hotel which may justify a weekend break in its own right.  You are looking at cash rates of €250 per night for a standard King Superior room for a weekend in early September.  For the same room you will pay 55,000 points, which is around 0.4p per point.  Given that we generally value IHG Rewards Club points at the same 0.4p, this is a decent but not spectacular way of spending them.  Unfortunately only standard rooms are available for points.

You can find out more about the InterContinental Lyon here.