Earlier this year we ran an article about redeeming Virgin Flying Club miles on ANA flights from London.  It is one of the best uses of Virgin Flying Club miles at 95,000 miles for a return business class flight. You would be hard pressed to find a better way to spend them, especially now that the 63,000 miles Air China business class deal has gone and Jet Airways has gone under.

Using your Virgin Flying Club miles for a trip to Tokyo has just got a whole lot more interesting.  ANA is launching a new Business and First Class seat on new deliveries of its Boeing 777-300ER aircraft, and the London route will be the first to get it.  It looks rather good, to put it mildly.

The aircraft will fly from 2nd August from Heathrow to Tokyo Haneda, which is by far the more convenient Tokyo airport.

On flights NH211 and NH212, the aircraft will fly on even-numbered days in August and odd-numbered days in September.  At some point during this period all flights will shift to the new seats – it depends on the delivery date of the 2nd plane. In total there will be 6 new aircraft delivered and 6 refurbished with the new seats. 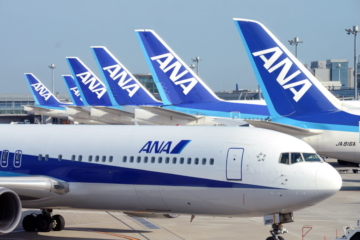 ANA will have eight first class and 64 business class seats on the aircraft, as well as a fairly small premium economy and economy cabin. This is a very premium-heavy aircraft.

It is not all good news, as the economy section is moving from 9-across to 10-across.  Of course, British Airways is doing the same thing with its Boeing 777 refurbishments and many carriers such as Emirates have been 10-across for years. 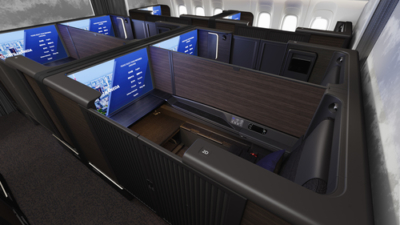 ANA has a smartphone app, ‘My Sky Channel’, which passengers can use in the air to control their IFE if they wish. 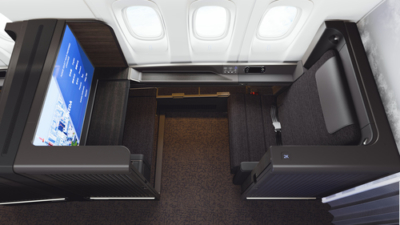 In the centre pair of seats, there is a movable partition that can be adusted and that is perfect for those travelling with other people. It looks like almost the entire partition can be lowered, making it very open between the two suites.

Of course, THE Suite also comes with a fairly high door.

THE Room is ANA’s new Businesss Class product.  Club World style, half of the seats face forwards and half face backwards.  It appears to be the Safran FUSIO seat.

If you look at the photo below the first thing that will strike you is how disproportionately wide the seat is.  Look at the head rest.  You can see the protective cover, which is about what you’d expect the seat width to be. THE Room looks like it is twice as wide – more sofa-like than a seat! ANA are saying that THE Room has twice the width of their old business class seat (click for Anika’s flight review) which is not hard to believe. 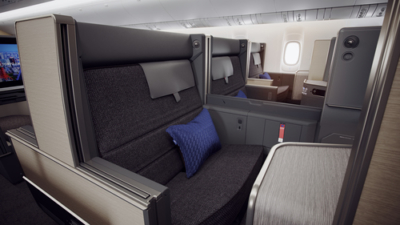 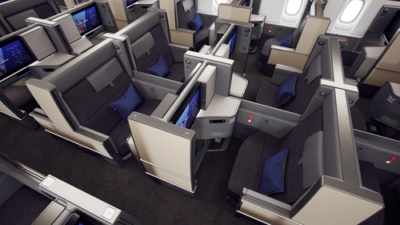 This seat also features movable partitions and side doors for additional privacy.  Here is a shot with the door closed:

If you’re feeling thirsty or peckish during the flight, you will also be able to visit this smart-looking self service bar:

From the supplied pictures, which appear to be CGI, the cabins have been tastefully styled with patterned and textured fabrics, dark wood effects and warm grey colours with a splash of blue.  Personal storage looks a big tight, but I think the final verdict on that needs to wait until we’ve seen the plane in the flesh – ANA is claiming there is a lot of ‘discrete’ storage space.

In addition to THE Suite and THE Room, ANA has also revamped the passenger boarding area (pictured below), which now looks more homely and less like the industrial kitchens you find on most aircraft galleys. A new mini-fridge will also dispense drinks and snacks for any in-flight wanderers from Economy and Premium Economy. 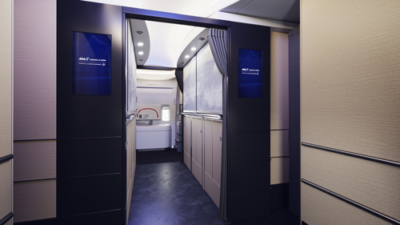 If you want to see more, there is a good YouTube video here:

If you were considering what to do with your Virgin Flying Club miles, or on your next business trip to Tokyo, this might just be it!   You can find out more about ANA redemptions via Virgin Flying Club on their website here.  Although, for now at least, ANA seems to have closed off reward availability …..