This is the first of two posts about the British Airways A350 arrival event.  In this article I will focus on the event whilst the second article will be a closer look at the Club Suite itself.

To celebrate the arrival of the aircraft, and to give us our first glimpse of the new Club Suite, British Airways invited us down to Heathrow last Friday.  The plan was to catch the first A350 arriving from the Airbus factory in Toulouse where it had been completing its flight testing.

With Rob unavailable due to family commitments I headed up to Heathrow myself – although I didn’t get off at any of the terminals. Due to the busy nature of the airport the event took place at one of BA’s many aircraft hangars, which involves getting off at Hatton Cross and walking through an industrial wasteland to its flight training centre.

Unfortunately – as you may have seen – the original event was cancelled. Serious issues with the air traffic control radar operations meant there was congestion at Heathrow. This wasn’t helped by the leftover disruption from Thursday’s thunder storms. In the end, British Airways prudently decided to postpone the arrival of an empty A350 in favour of passenger services.

With the A350 on scheduled operations to Madrid from the 5th August, however, British Airways needed the aircraft (and its crew!) back as soon as possible. It was flown in with little fanfare on Saturday, as you can see in this video:

…. whilst the press event and aircraft walk-through was rescheduled for today (Monday).

This time, everything went to plan. We were shuttled airside to one of the BA hangars, which had been partitioned off. It was beautifully decorated: 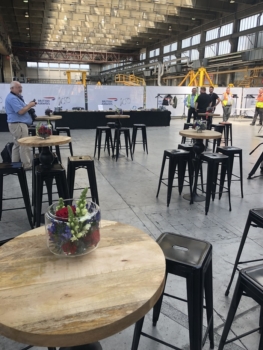 We were offered drinks and a light lunch before entering this large ominous looking black box: 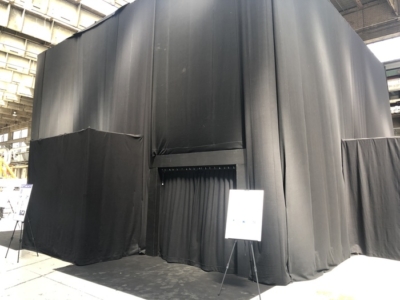 …. which was home to a 360 degree video projection and laser show. British Airways has very helpfully uploaded a video about it: 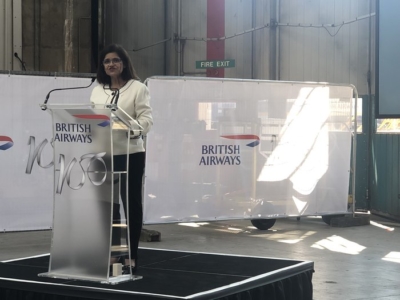 Bringing the A350 into service understandably takes a huge amount of collaboration between departments, with engineering, logistics, design groups and product experience people all working together to deliver the aircraft.  The post delivery phase of a new aircraft launch requires a lot of work before it can enter service and the engineering teams managed to squeeze an already short schedule into an even tighter one to allow this press event to re-run.

After Sajida Ismail’s short speech the aircraft was towed from its stand at engineering: 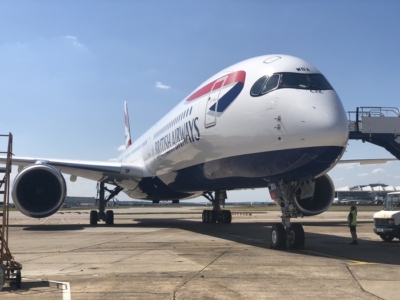 The 22 cabin crew and pilots who ferried the aircraft from Toulouse on Saturday also emerged for a quick photo opportunity: 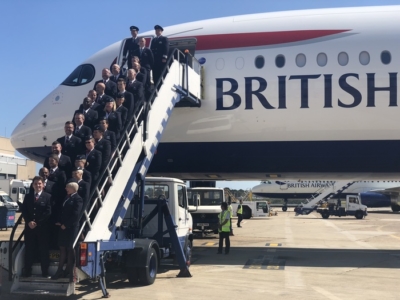 It is always surprising how large these planes are. It is hard to get a good sense of scale from airport terminals but, standing on the ground, it becomes clear what behemoths they are. Here I am, next to the Rolls Royce engines: 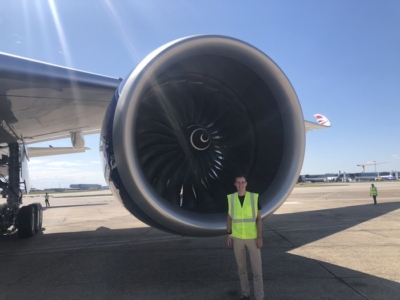 After a few minutes we were allowed to board the aircraft and take a look inside and – most importantly – our first look at the Club Suite! To read about our first impressions of the Club Suite on the A350-1000 please click through to part two of this article.