This is the second of two posts about the arrival of BA’s A350. In the first article I looked at the event itself whilst this article will be a closer look at the Club Suite itself.

This is the first time that HFP – and indeed anyone apart from some select British Airways personnel – had seen the cabin. When Club Suite was first announced Rob was able to see a virtual reality mockup but it is quite hard to get a sense of the space through two tiny head-mounted screens!

The first thing you notice about the British Airways A350-1000 is the brand new plane smell.  If you have ever been on a new(ish) aircraft you may know what I mean!

Although the A350 wasn’t flying off anywhere, British Airways had set the aircraft up as if it was ready to welcome passengers onboard. Overhead mood lighting, as well as in seat lighting, had been switched on to give a fuller picture of what passengers can expect.

It looked very smart. Although it uses quite a muted colour palette of greys and some wood effect, it does look good: 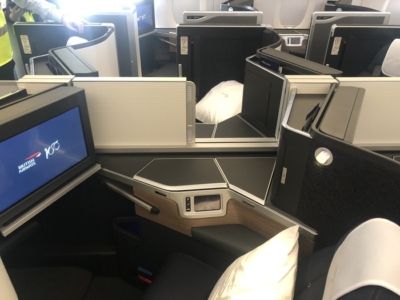 British Airways has retained overhead bins on both sides of the aisle as well as above the centre pair of seats, ensuring plenty of storage. They have NOT opted for adjustable air vents, although there are overhead reading lights in addition to those included in the seat.

There are two business class Club Suite cabins. The first cabin contains 44 suites in eleven rows whilst the second is much smaller with only three rows at 12 seats in total. In total there are 56 Club Suite seats arranged in a 1-2-1 configuration with all-aisle access. 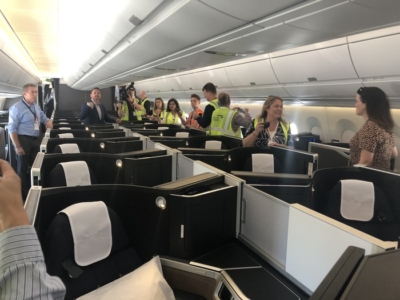 The two cabins are divided by the self-service Club Kitchen: 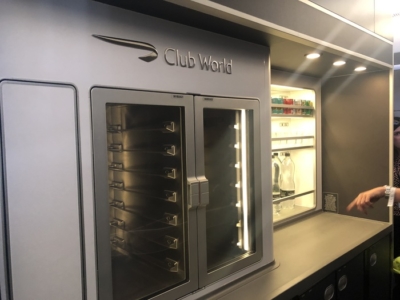 …as well as two toilets (there are three toilets in total in Business). Although they did not have a huge footprint, the way the toilet and sink has been set up makes them feel quite spacious. 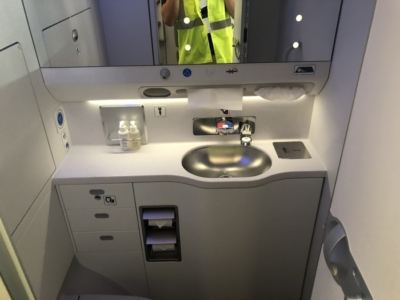 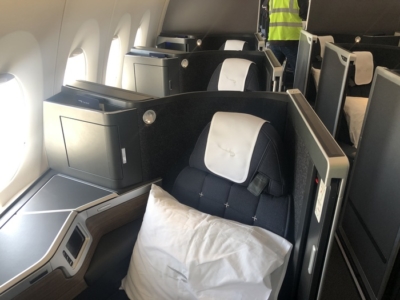 The first thing that struck me when I sat in the seat is that it feels remarkably spacious. Despite the door and the fairly high seat surrounds, it does not feel cramped. With storage on one side and a retractable armrest on the other, there is plenty of room at head-height.

The seat itself feels comfortable, despite the fact that I am 6’2″ and have relatively broad shoulders. Here it is in seat mode: 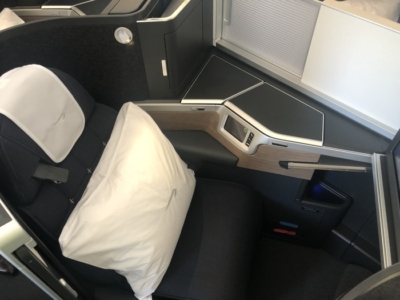 And here in bed mode, with The White Company bedding: 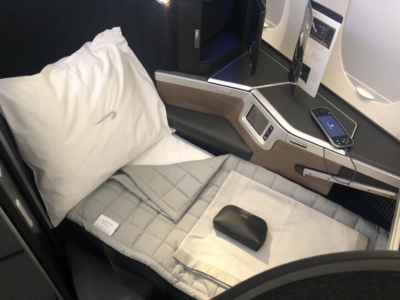 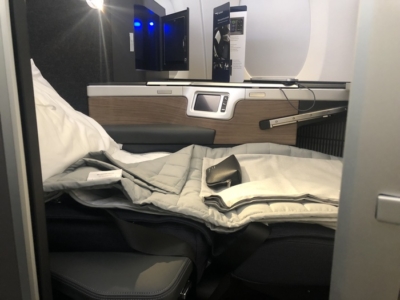 One of my main concerns regarding the Club Suite was that it might be too private. In renders and other photos the middle divider between the centre pair of seats looked very small. It IS small – only about a foot (30cm) can be moved. However, this has been carefully positioned so that when both passengers are seated you can see each other without having to move forward or back. This affords privacy whilst still enabling conversations and a line of sight with your neighbour. 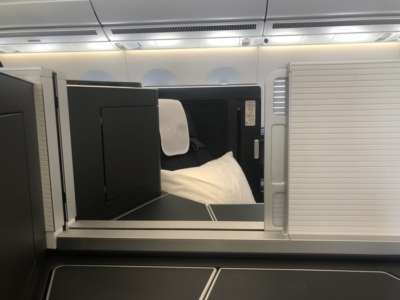 The literature pocket is at the top of the seat. 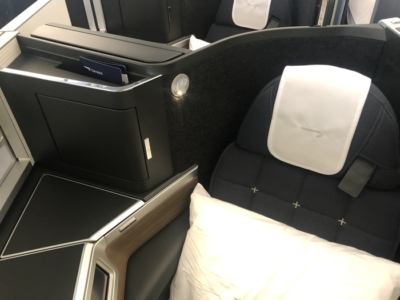 Storage has also been improved on Club Suite. There are now four storage areas. The first is a small cupboard at eye-level which comes with a mirror. This is perfect for storing headphones or bottles. 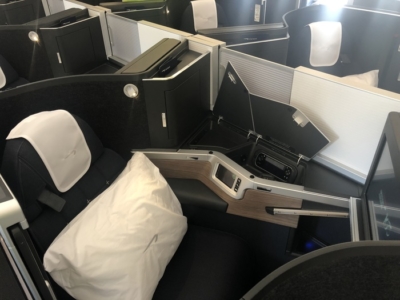 There are two shallow storage areas along the side console. One of these is outfitted with two USB plugs, a headphone socket and universal power socket as well as the personal in flight entertainment controller. 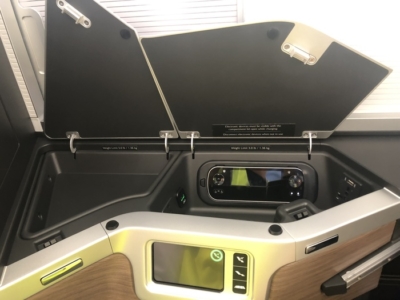 Finally, there is an open storage compartment at foot level, again suitable for headphones, water bottles or similarly sized objects.

If you have read our previous coverage of the Club Suite you will know it comes with a foot cubby when in bed mode. This innovation has now become one of the most popular ways to ensure direct aisle access for every passenger without reducing the density of business class configurations. Most airlines are now installing seats with foot cubby holes, so British Airways is in good company.

At 6’2″ I was able to lay flat in the seat with no problems. The height of the cubby isn’t quite as generous although I do have decent sized feet and kept my shoes on: 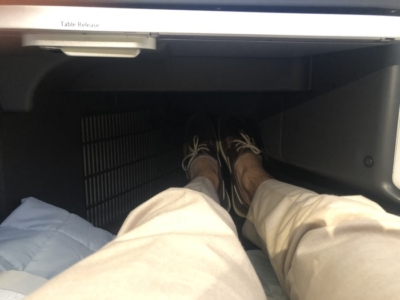 Although not without its detractors, the foot cubby is a decent compromise when it comes to being able to offer direct-aisle access.

The tray table is one of the stand-out pieces of engineering in the Club Suite seat. It slides out directly from underneath the in-flight entertainment screen, and can be latched in two positions: all the way out or, alternatively, at a half-way point. It is a full-width table which can be folded out. This means you can keep it as a small table for drinks or snacks, or it can be folded out to create a large table for dining. It is very nicely done. 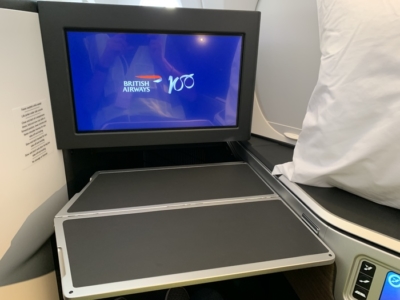 In flight entertainment is provided by an 18.5″ Panasonic screen. It is fixed so can be used gate-to-gate which is an improvement. We weren’t able to test the IFE on our walk-through but this looks like a solid offering.

The best seats in British Airways A350 Club Suite cabin

Whilst all the Club Suite seats are nominally identical – all have direct aisle access, identical legroom and privacy – the seats are not perfectly aligned with the windows in the A350-1000. This means that, depending on which row you are seated in, you have between one and two windows.

This is not a massive variance but might factor into your choice of seat if you are particularly picky!

I am, surprisingly, impressed by the new Club Suite.  My worries that it would feel too cramped and private have proved unfounded. When seated it feels remarkably spacious, and the addition of the door is a clear improvement.

Whilst it would be nice for the entire divider to retract between seat pairs, the sliding partition does allow for conversations. It is – obviously – not as ideal for families or couples travelling together compared to the previous Club World double beds, but it is not quite as extreme as I thought it might be.

The additional storage storage is a bonus, and the in-flight entertainment will be gate-to-gate which is a clear improvement.

The design and engineering of the tray table is exceptional. Whilst this may sound like an insignificant detail, if you consider how much the table gets used it is a small detail that elevates the whole travelling experience.

It’s safe to say that British Airways has outdone our expectations and developed a product that is really very good. The real test will be in a week’s time, when we are due to fly to Madrid on the first commercial flight with Alex Cruz, the BA CEO, himself …..