Las Vegas used to be, surprisingly, a very difficult place to use your hotel loyalty points with most of the ‘strip’ hotels not carrying international brands.  And, let’s be honest, if you want a proper Las Vegas experience you need to be on the ‘strip’.

In recent years all this has changed.  Hyatt has partnered with MGM, which lets you earn and burn at hotels including Bellagio.  IHG Rewards Club has partnered with the Venetian and Palazzo which are part of the ‘InterContinental Alliance’ sub-brand.  Hilton’s Waldorf Astoria recently took over the Mandarin Oriental.  The Cosmopolitan is part of Marriott’s Autograph collection.

The hotel will be bookable for cash via the Radisson website later this year and will join Radisson Rewards early in 2020.

Of course, you need to remember one thing about Las Vegas redemptions.  Cash rates vary wildly, with weekend rates usually being substantially higher than weekdays, assuming there are no major conventions on.  If you are visiting midweek – which is what I recommend – cash may be a better deal.

PS.  Slightly shockingly, because of what I said above, an IHG press release this week said that The Venetian in Las Vegas is the most popular IHG Rewards Club redemption.  Taking Tuesday 8th October as a random example, however, it is $220 including taxes or 70,000 points.  This is a terrible deal given my standard 0.4p per point IHG valuation. 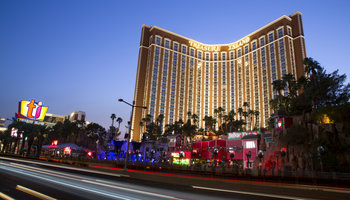