Anyone who is impatient to try out the new British Airways Club Suite should hope that it doesn’t go the way of United’s Polaris.

Back in 2016, the American carrier announced a completely new business class concept featuring a brand new seat design as well as lounge refurbishments and soft product. Polaris was widely welcomed as a step-change improvement in United’s business class offering. Unfortunately, it was a slow roll out. Delays at the seat manufacturer meant that in the first few years very few Polaris-fitted aircraft were flying.

Things have improved since then and United now has a special Polaris mini-site that tracks the extent of the refit across the long-haul fleet. Looking at it today, Polaris is fitted on 68% of the long haul fleet. The goal is to have the new business class seat on all aircraft by the end of 2020. 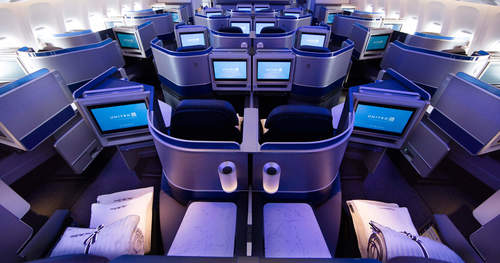 The Polaris seat is based on the Optima product designed by Priestmangoode. It is an angled seat in alternating configurations, meaning that some seats are more private than others due to the location of the side table.

Here is a PR photo from United:

The good news is that United actually flies many of these aircraft to London. The transatlantic market is one of the most competitive in the world and London-New York is the only billion dollar route. Whilst American Airlines and Delta Air Lines have joint ventures with British Airways and Virgin Atlantic respectively, United flies alone. This means that in order to compete, United needs to offer its most competitive product.

To achieve this, United has been retrofitting 21 of its Boeing 767 aircraft into a super-premium configuration, increasing the amount of Polaris business class seats and introducing a premium economy cabin.  At the same time, it is cutting back sharply on standard economy seating.

In total, the aircraft will have:

Here is the seat map, which makes it obvious just how premium-heavy it is (click to enlarge):

From the 15th September:

United will introduce a 5th daily flight from Heathrow to Newark

Across the five flights, United will operate the most business class seats of any US airline between the two cities.

United will soon be flying five of these refitted Boeing 767 aircraft daily between Newark and Heathrow, all of which will have Polaris. It will no longer be a guessing game as to what seat you will get.  If you fly United, you will get the same model of aircraft with the same seating configuration on all five flights.

United is also in the planning stages of re-fitting their Heathrow lounge at Terminal 2 in line with other new Polaris lounges in the US. Heathrow is one of only three planned Polaris lounges outside North America.  They need to be careful here, because at present it is easily the best of the Star Alliance lounges in Terminal 2.

If you are wondering what the Polaris seat is like, we are too. Neither Rob, Anika or myself have ever flown the product, although we are keen to review it in the future.