Yesterday was the first day of commercial operations for the British Airways A350-1000.

BA had rounded up a group of journalists, bloggers and (save us, please …..) influencers to try out the new Club Suite cabin on a real flight.  We were invited and, with Rob on holiday, the task of being one of the first people to experience Club Suite fell to me 🙂

If you have been keeping up with the BA A350 coverage, you will know that it is operating on selected Madrid flights for crew training purposes for the month of August.  You can see the A350 Madrid schedule as we understand it here.  This is by far the easiest and cheapest way of experiencing the new British Airways business class seat.

Here is a photo from reader Colin of our aircraft taxiing at Heathrow: 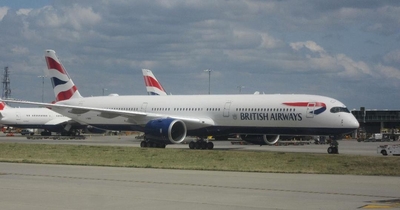 With the Heathrow Airport staff strikes looming, the inaugural service almost didn’t go.  I feel sorry for the British Airways PR team who have had to contend with disruption to what are undoubtedly two of their biggest events of the year – the aircraft delivery and inaugural flight!  Thankfully, the first day of strikes were suspended and our flight could proceed as normal.

The day started in the Galleries lounge at Terminal 5B where one corner had been partitioned off for us. I decided to start my day off with several glasses of champagne and – you will be pleased to hear – managed not to embarrass myself… 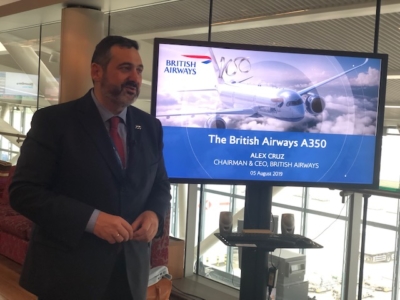 British Airways CEO Alex Cruz gave a short speech about the aircraft and took some questions – more on that in another article later this week.  We headed down to the aircraft for early boarding so that we could take photographs before other passengers arrived.

The goodies were not restricted to the media contingent.  British Airways had set up an instagram frame, branded cupcakes and a full A350 cake at the gate, which no doubt surprised many of the economy passengers who may not have realised what a special flight they were on! 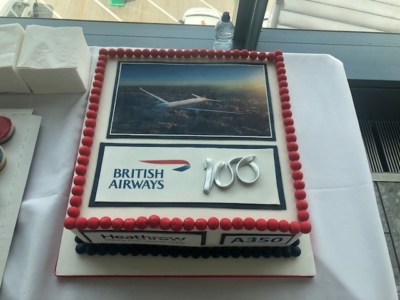 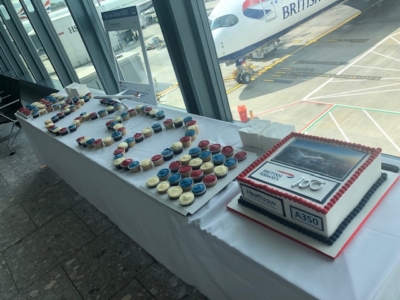 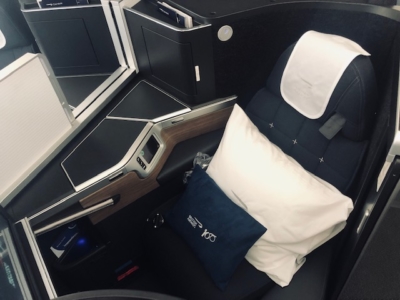 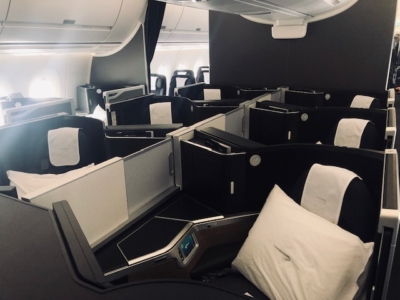 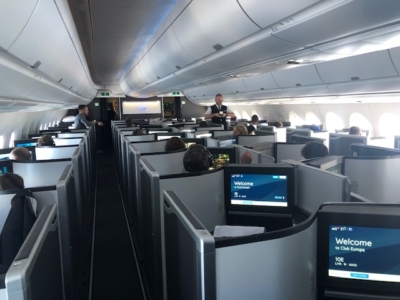 We were quickly brought a glass of champagne and some nibbles: 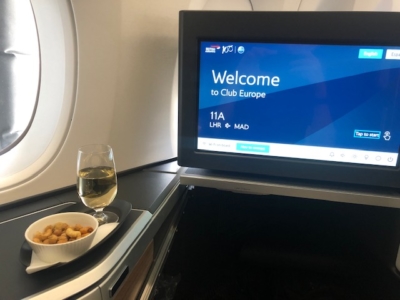 … as well as this very stylish BA100 commemorative amenity kit, which will be available in Club World for the remainder of August. The contents are identical to the existing White Company amenity kit, but I thought the shape and colour looked very stylish. 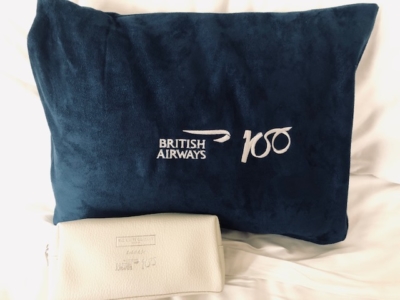 This is the second time I have been on the British Airways A350, and I must admit that the Club Suite continues to impress me.  The materials and fabrics used make this a very classy, sophisticated seat. The fabric lining inside the hard shell – similar to the fuzzy material inside your car boot – really softens the look of the Cabin.

Whilst it is not a particularly vibrant cabin – there are a lot of dark shades here – the cumulative effect of all the textures is one that feels sophisticated and is unlikely to look dated in a few years’ time.  Photos don’t really do it justice: 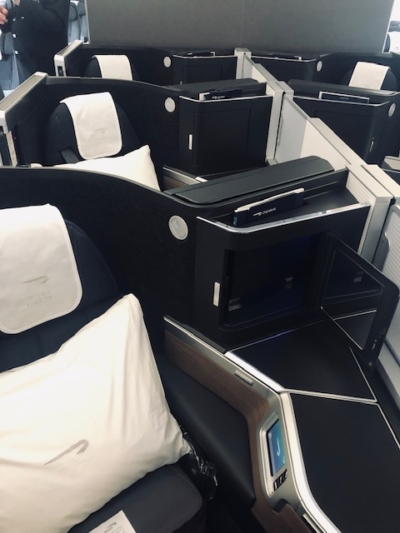 What I particularly like about the seat is the tray table, which can be extended to create a very large and very stable surface, or can be used simply as a small shelf. As you can see, there was room to spare with my large 15″ laptop: 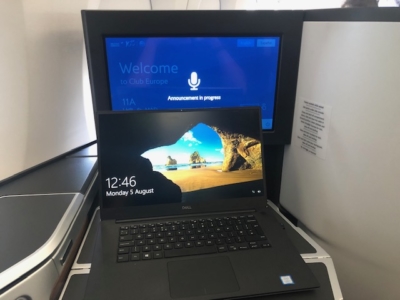 Because this was an inaugural flight, a decision was made to offer a slightly more substantial meal than the usual Club Europe meals on the London-Madrid route.

On recommendation from one of the cabin crew I went for the yellow chicken curry. It may not look or sound like much, but it tasted excellent and I overheard several people talk about how tasty it was. 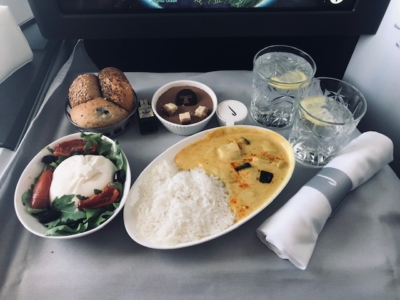 For this flight, the PR team and cabin crew had set up the rear Club cabin as a demonstrator with a kitted out bed and a variety of Club World food items, which looked great: 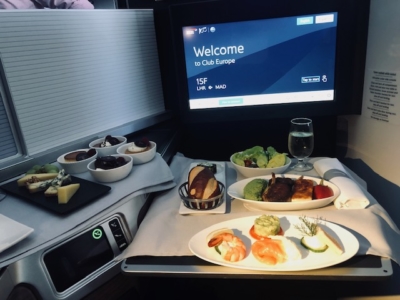 I made the most of it and had a quick lie down in the seat and closed the door.  At 6’2″ I am not exactly short, but the seat is really quite comfortable. British Airways has made an effort to make the foot cubby hole as spacious as possible. 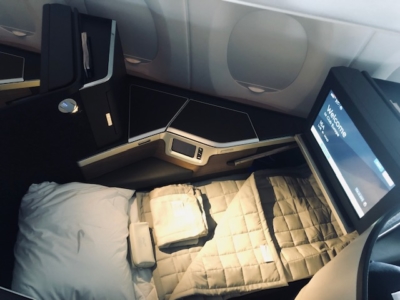 According to the lead designer of the seat, they re-engineered the tray table under the IFE to allow greater height for your feet compared to other seats based on the same Super Diamond frame.  Owing to the angled nature of the suite, the seat also offers more elbow width which is great when in bed mode.

The A350 also features a new in flight entertainment interface on its 18.5″ Panasonic screens.  British Airways recently signed a deal to allow use of the IFE on short-haul flights like those to Madrid, so we were able to try it out. The interface is very slick and looks great, although I didn’t have much time to use it on this 90 minute flight! 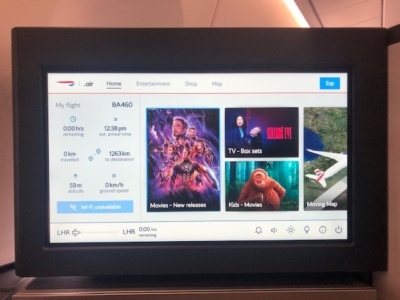 This flight was understandably celebratory – I spent most of it chatting to other journalists and bloggers during the flight. The BA100 pillow, special amenity kit and food will not be present on the remaining training flights to Madrid this month.

Nonetheless, I am very impressed with the new Club Suite.  Let’s be clear – it is not a life-changing product.  The seat it is based on already flies with other airlines such as Qatar Airways, which has already started replacing it with Qsuite, and American Airlines.  That said, the thought and customisation that British Airways has put into the Club Suite makes this a very, very good product.

You can read more about Club Suite, including which routes it is on here.