We have a separate pinned article on the home page covering the pilot strike.  However, it is important to repeat something we added yesterday and which we covered on social media.

British Airways emailed a lot of people on Friday night to say that their flights were being cancelled due to the strikes.

What did people do when they received these emails?  They went to ba.com and triggered the cancellation and refund.  They then either booked – often at substantial expense – a replacement flight on another airline, or decided not to travel and cancelled non-refundable hotel rooms.

BA was only kidding you!  Surprise!

Yes, a lot of flights have been cancelled before, on and after the first batch of strikes on 9th and 10th September.  However, a lot of flights – despite people receiving cancellation emails – were NOT cancelled.  Someone at BA pressed the wrong button.

You should, overnight, have received a second email from British Airways if you were mistakenly told your flight was cancelled.

However, if you received a cancellation email from BA, do NOT necessarily believe it.  Do these two things:

Go to Manage My Booking and look at your flight.  If it says ‘cancelled’, it’s cancelled.  If it simply shows in a red font then it IS operating although it remains at risk, depending on how many pilots report on the day and how many replacement aircraft BA can source.

Go to ba.com and try to book a seat on the flight you are on.  Without wishing to state the obvious, if you can still buy a seat, the flight is going.  If you can’t, it’s not.

Here is a typical reader story I received yesterday (click to enlarge): 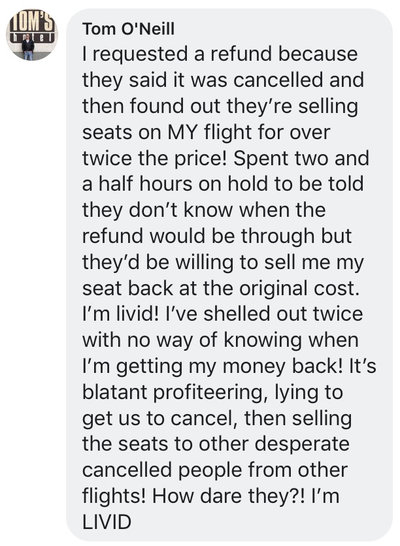 Note that British Airways has not yet cancelled any flights for the 2nd strike on 27th September.  It has until 13th September to cancel them to avoid EC261 compensation.