Just over a week ago, Virgin Atlantic celebrated the launch of its route to Tel Aviv with a media event.

Although it was not the first flight – the route had been active for almost a month – this was a special celebration trip with Sir Richard Branson and Virgin Atlantic CEO Shai Weiss on board.

(Shai Weiss is, as you might have guessed, Israeli. Shai has said on numerous occasions that the decision to launch the Tel Aviv route was not done for nepotistic reasons – although I’m sure Shai enjoys flying his own airline when he returns home – but on a purely commercial basis. He apparently recused himself from the decision entirely.)

Although there was nothing to review on this flight – we stayed in independent hotels and the nature of a press flight is that you rarely actually sit in your seat – we thought it might be interesting to write about the ‘behind the scenes’ of events like this.  If it wasn’t already clear from the introduction, Virgin Atlantic paid for the entire trip.  Which was nice of them 🙂

Israel is not a destination I have been to before, although it has been recommended to me many times.  I was very excited to experience it for myself. 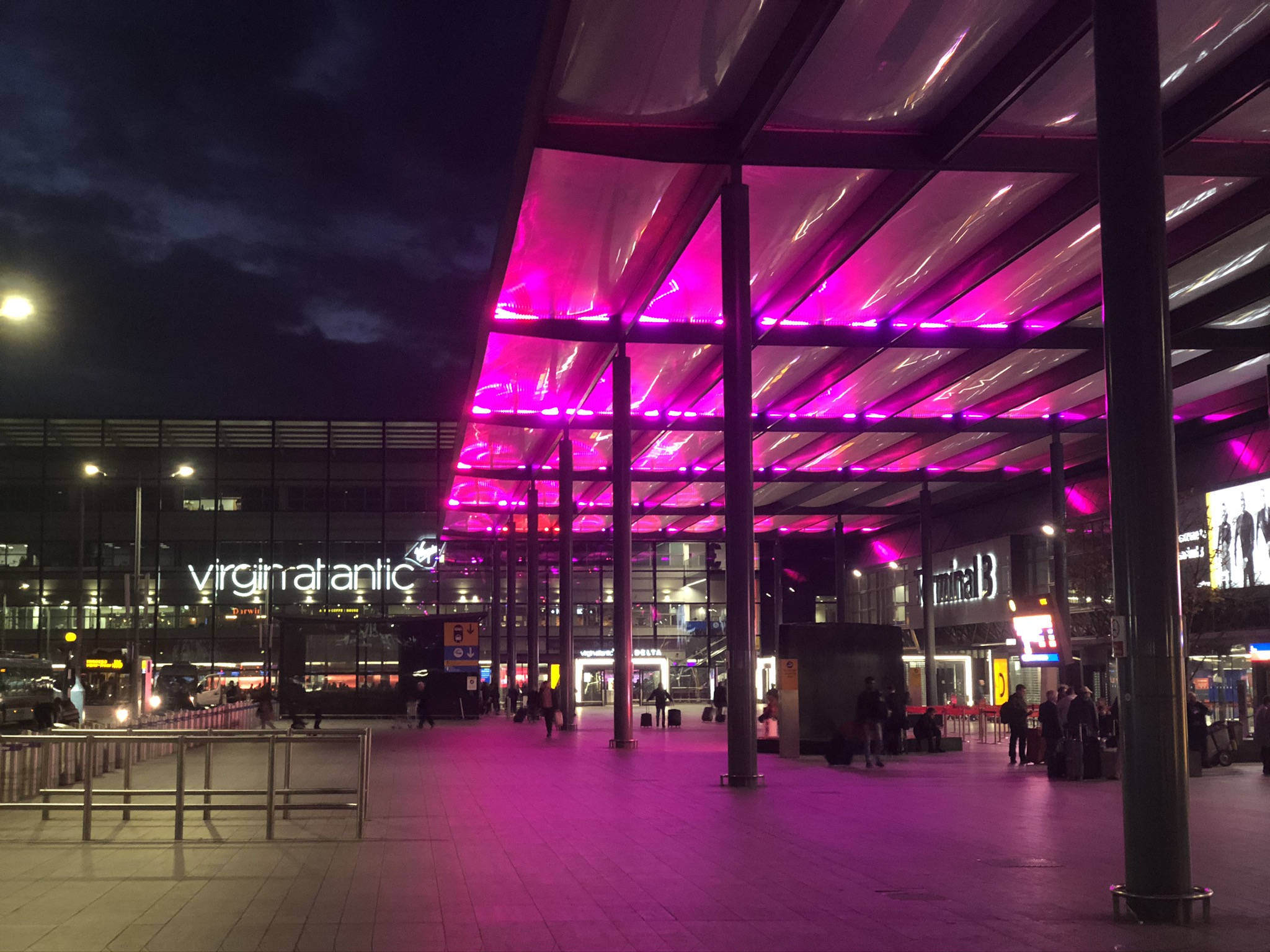 Since the main reason of this trip was for PR purposes, Virgin Atlantic adjusted the departure time of our outbound flight in order that it would land at sunset and allow a good media show. The usual schedule has it departing at 14:50 and arriving in Tel Aviv at 21:50. Our flight instead departed at 09:25 with a landing time of around 4pm.

Click on any of the pictures to enlarge.  They are a mix of my own images and ‘official’ Virgin Atlantic shots.

After checking in and making my way through security I walked to the Virgin Clubhouse. Of course, the first thing you should do when entering the Clubhouse is book a complimentary spa treatment, so that is what I did, opting for a relaxing hand massage.

One corner of the Clubhouse had been cordoned off for guests which included media, a handful of influencers, selected top frequent flyers and their families and Virgin Atlantic staff.  Travelling for work is often a solitary experience so I really enjoy press trips like this – it fosters a sense of community and reminds me of fantastic school trips of yore!

I wanted to be one of the first to board so I left early. At the gate, Virgin Atlantic was celebrating with ‘normal’ passengers too, handing out goody bags with the special Tel Aviv-inspired socks from the Upper Class amenity kits.

The route itself is operated by one of Virgin’s A330s, with the legacy 1-1-1 seating arrangement in Upper Class. I was sat in 9A, which is the penultimate seat on the left hand side. 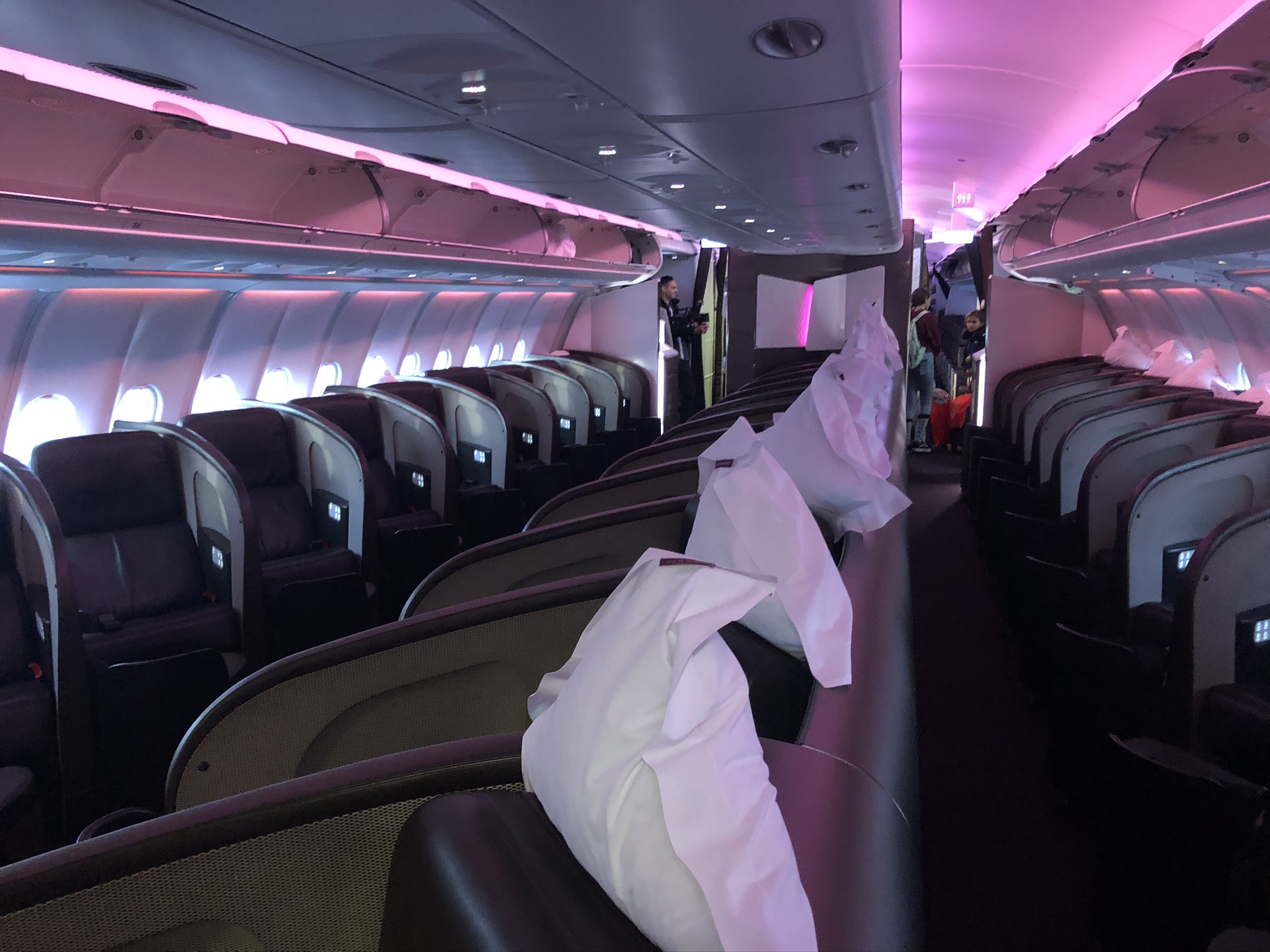 After everyone had boarded, Sir Richard Branson and his entourage were surreptitiously ushered on. Interestingly, whilst there were a few empty seats in Upper Class, Richard and Shai decided to sit in Premium. For a short flight like this (around 5 hours) it does not make a huge difference, since you are unlikely to be sleeping anyway.

Richard made a brief announcement on the cabin PA, which I’m sure surprised those sitting in Economy who probably did not know that Richard was on this flight, despite all the celebrations! 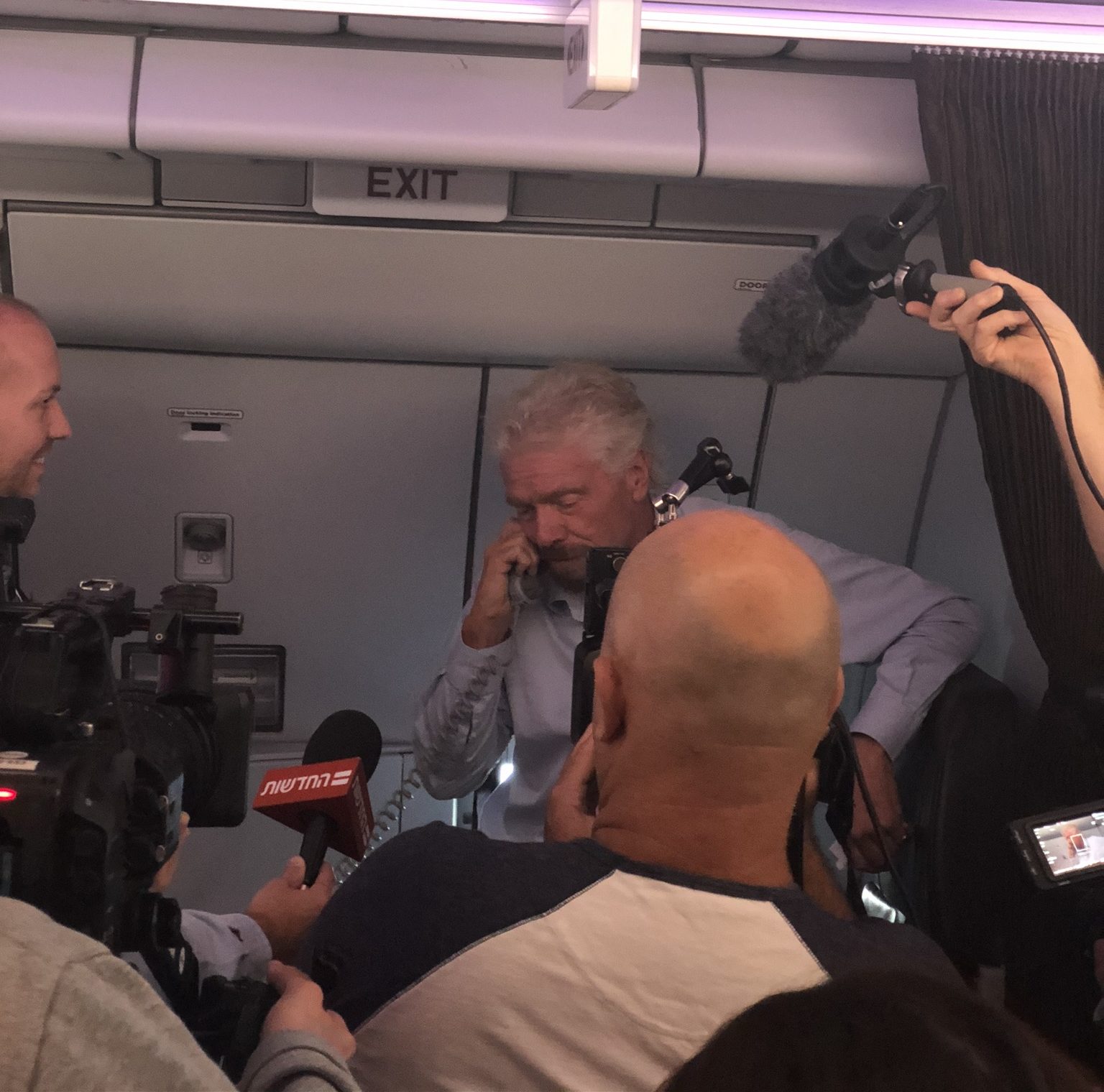 The rest of the flight proceeded as normal, although with a slightly chattier contingent!  Virgin’s A330-300s also have the signature bar, which was staffed by a Grey Goose ‘mixologist’ making a variety of vodka cocktails.

We were also joined by Katherine Mills, a fantastic magician.  (For clarity, Virgin Atlantic does not normally provide a magician on its flights!)  She was also on the recent A350 flight to New York and her tricks continue to delight and confound me.  I like to think I am quite good at figuring out the sleight of hand but Katherine has me stunned every time. If you need an entertainer for an event I cannot recommend her enough! 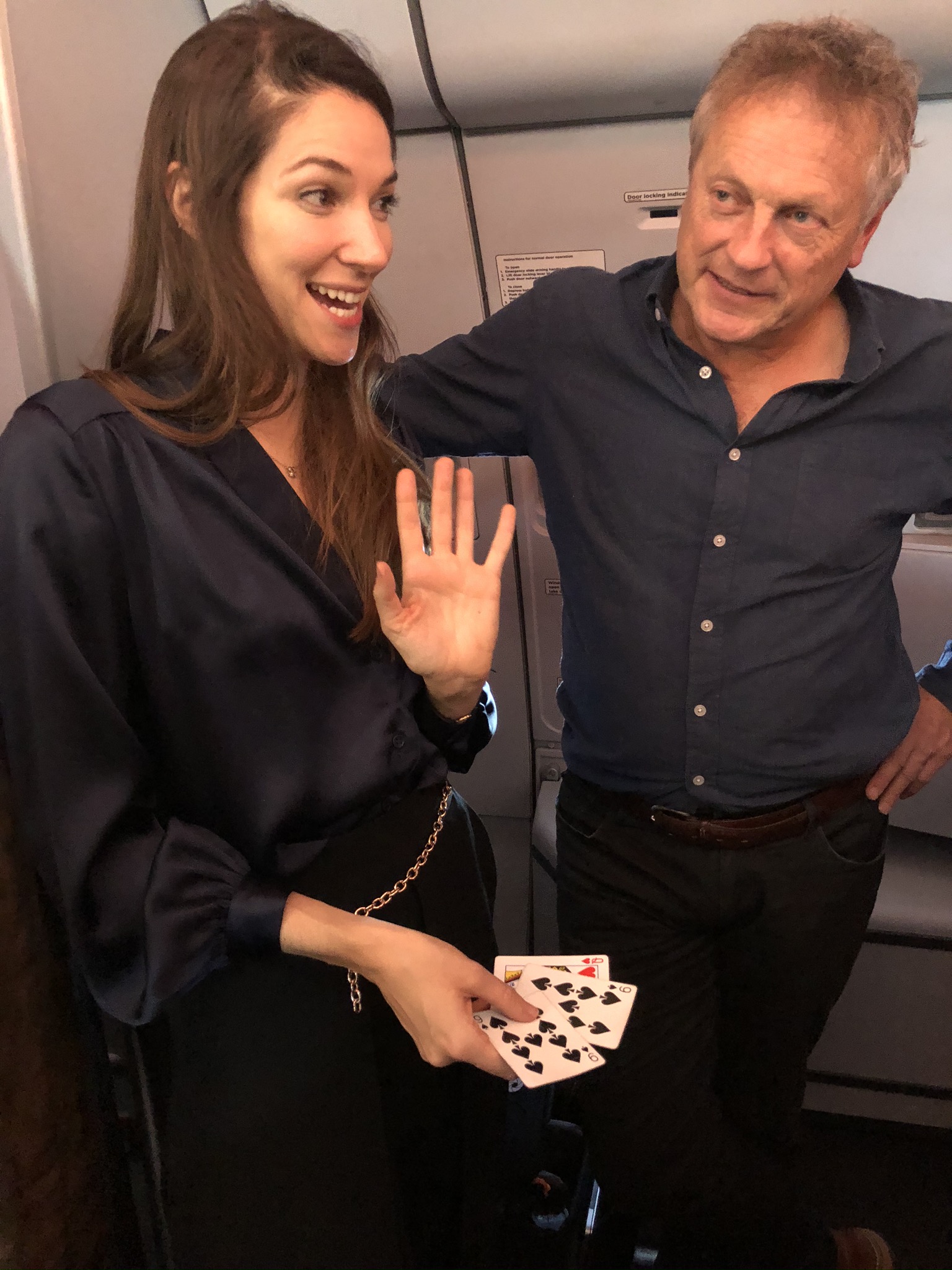 Here she is making Richard’s card appear behind the aircraft window (!): 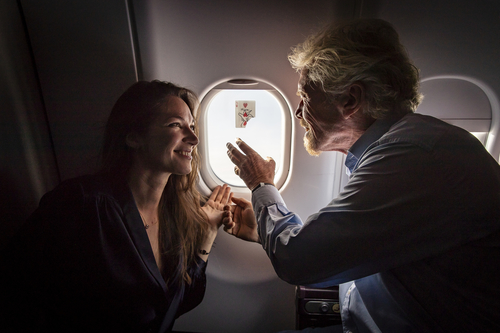 We landed in Tel Aviv on time and taxied not to the terminal but to a remote stand which, I was told, is also where Air Force One parks. Waiting for us was a crowd of Israeli media. Here is Richard deplaning: 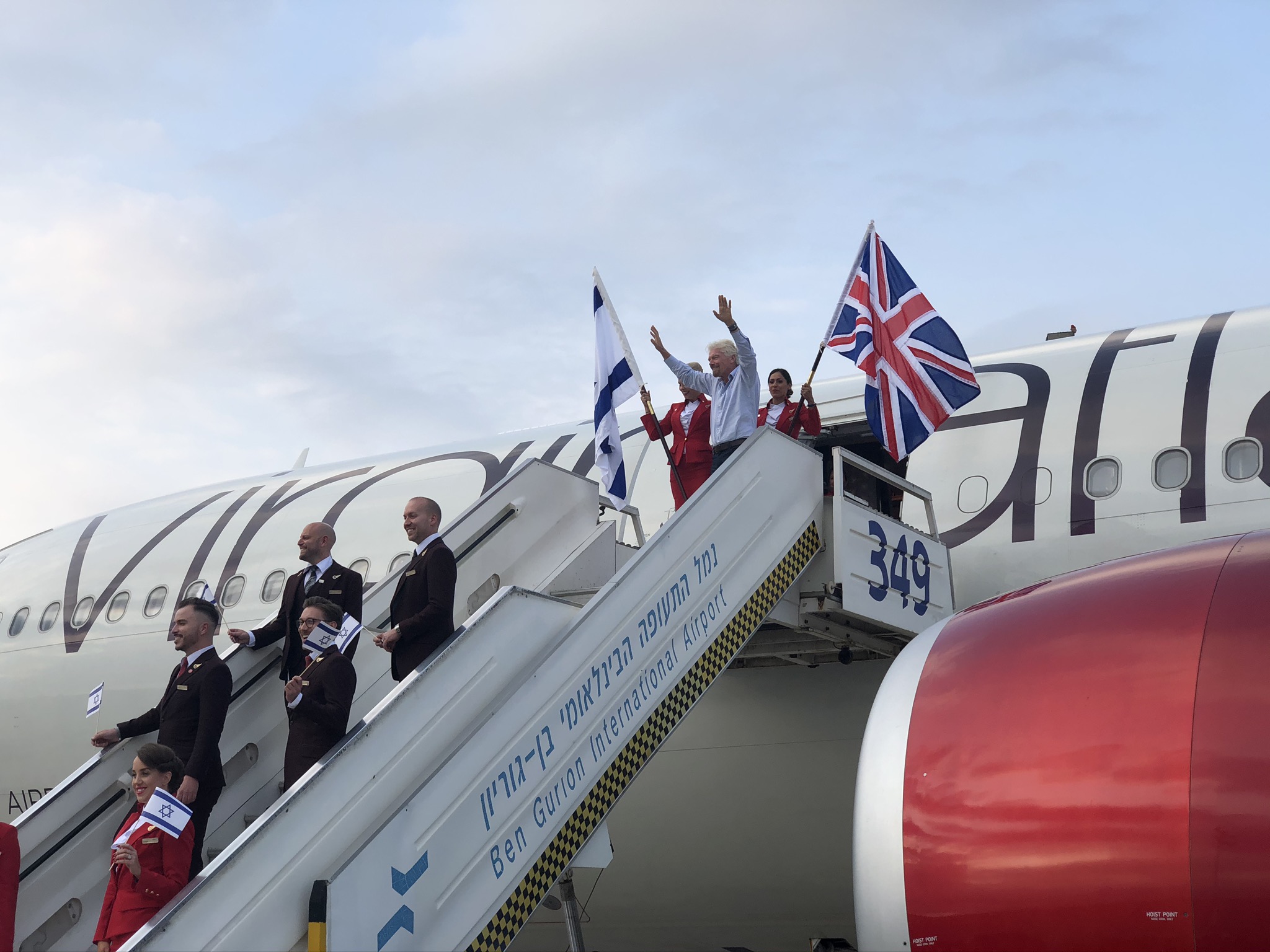 To the delight of the Israeli media, Richard also kissed the ground as the Pope does …. 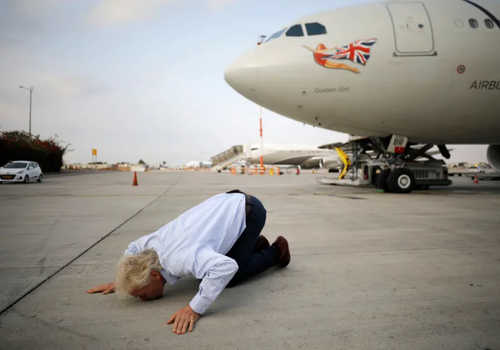 Here’s a secret though: I was talking to the photographer who said that he was in a rush to get this shot, and asked Richard to kiss the ground twice more so he could frame it properly. Sometimes it’s better not to be famous!

We were then shuttled away to the private terminal at Ben Gurion airport for immigration and a short press conference with Shai, Richard and a representative for the Israeli tourism board. 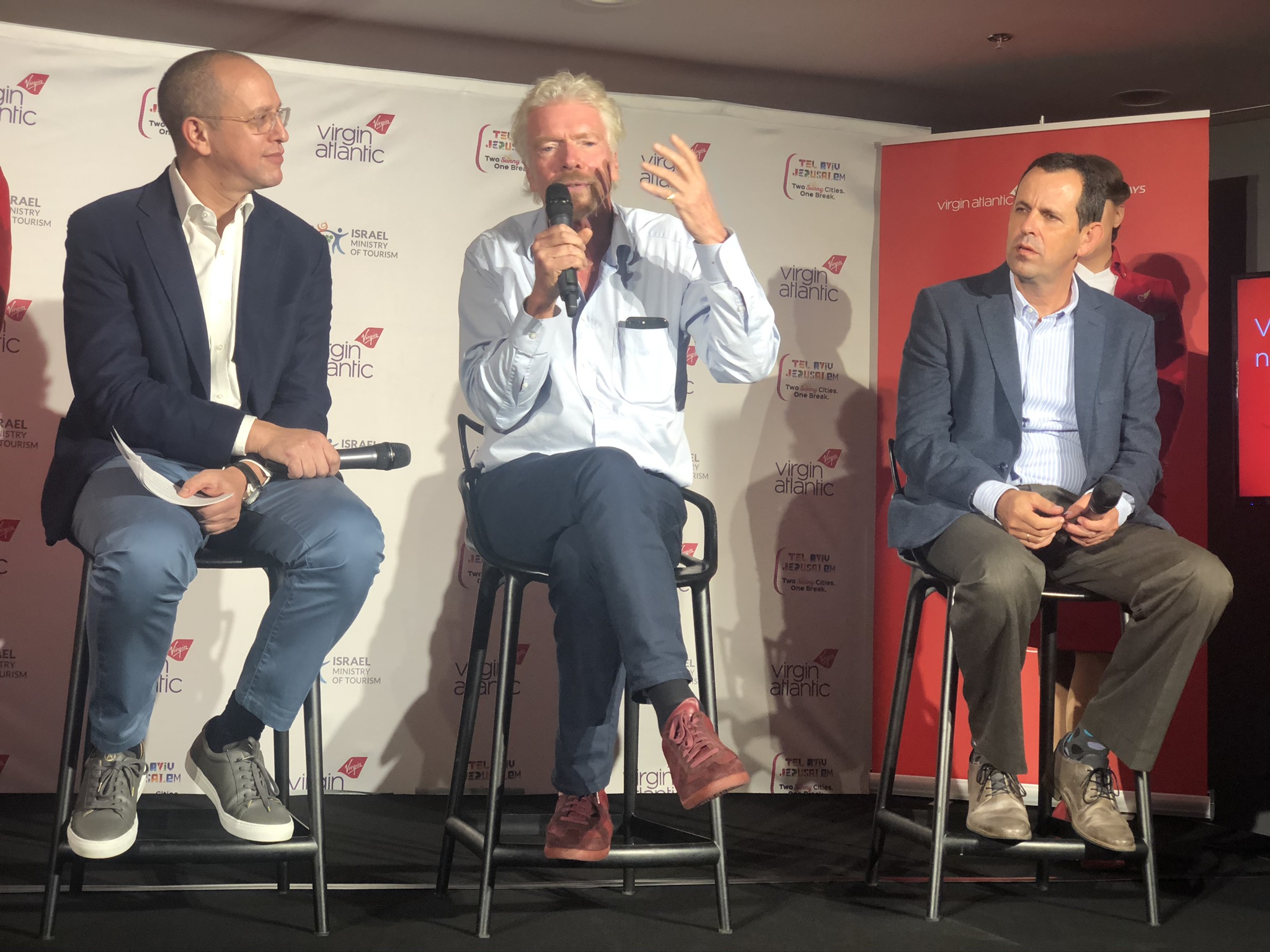 My time in Tel Aviv

In total we spent two nights in Tel Aviv, seeing the sights (and swimming in the warm Mediterranean sea!) during the day and attending various Virgin Atlantic and Israeli tourism board functions in the evening. The second night, Richard and Shai gave a quick speech at a large party: 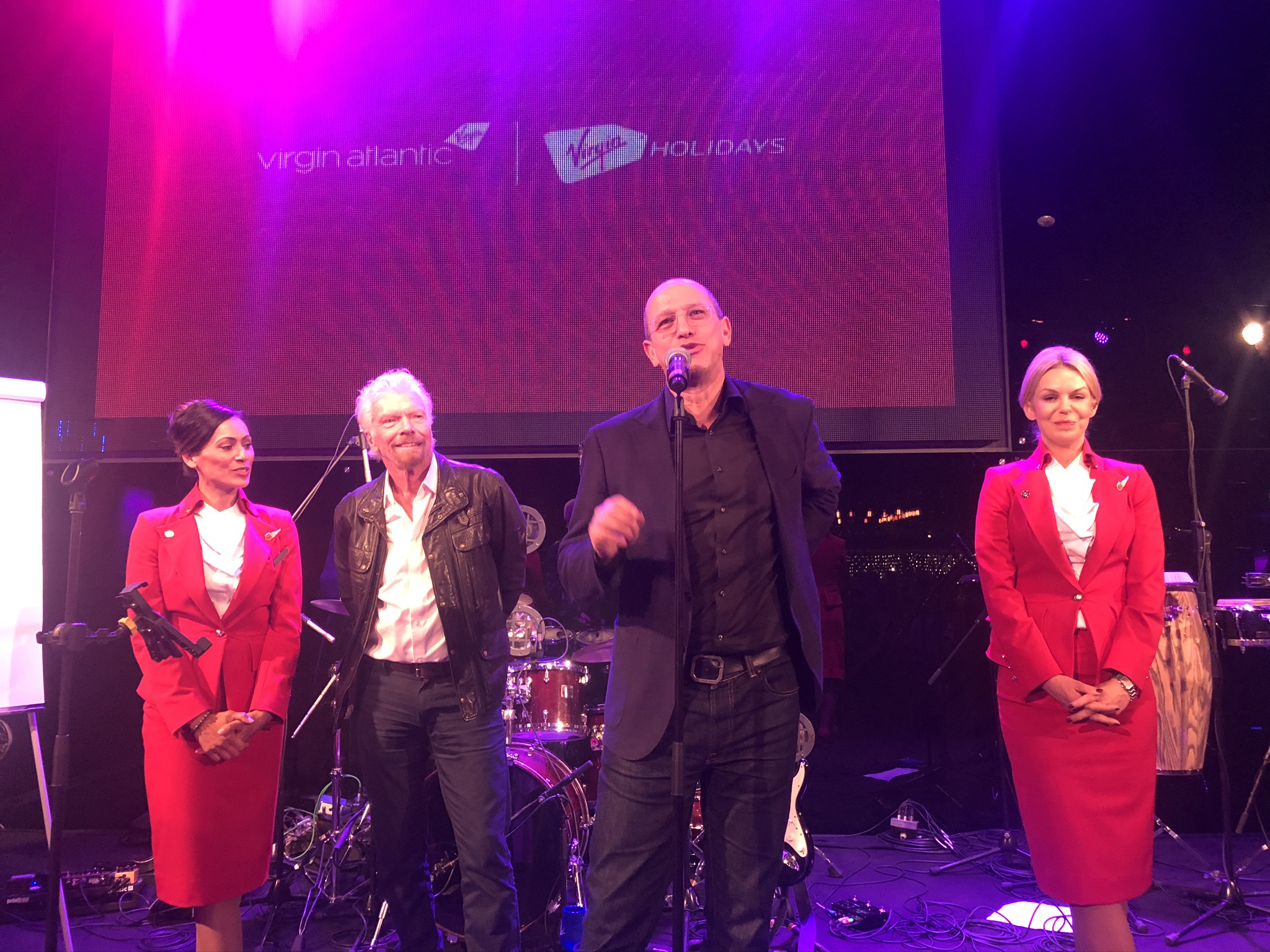 I must admit that I still have the attitude of a student because I stole six beautiful Grey Goose cocktail stirrers, although I can assure you I wasn’t the only one ….

This article isn’t a destination guide but I have to agree that Tel Aviv and nearby Jaffa are fantastic cities to visit, combining climate: 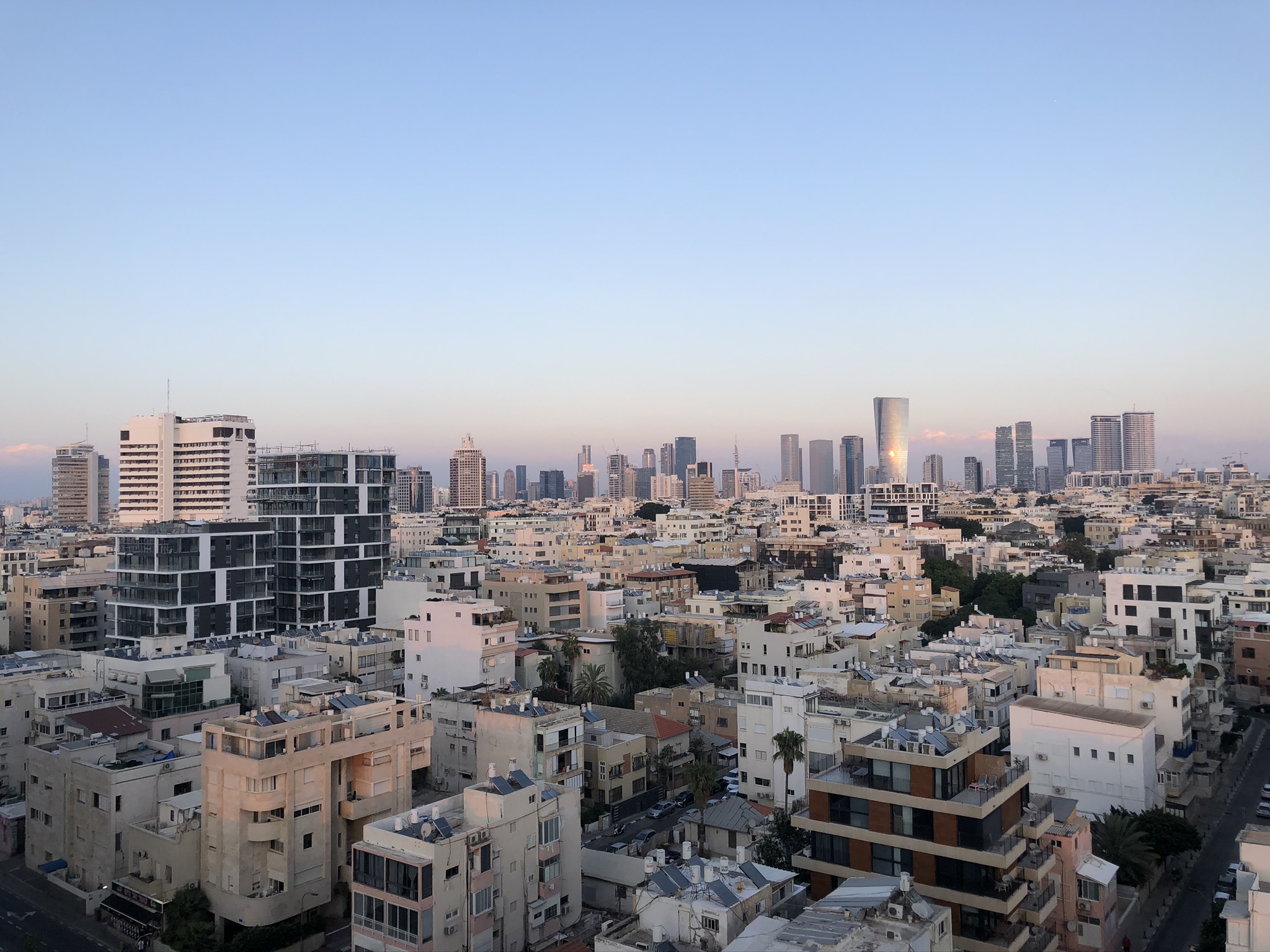 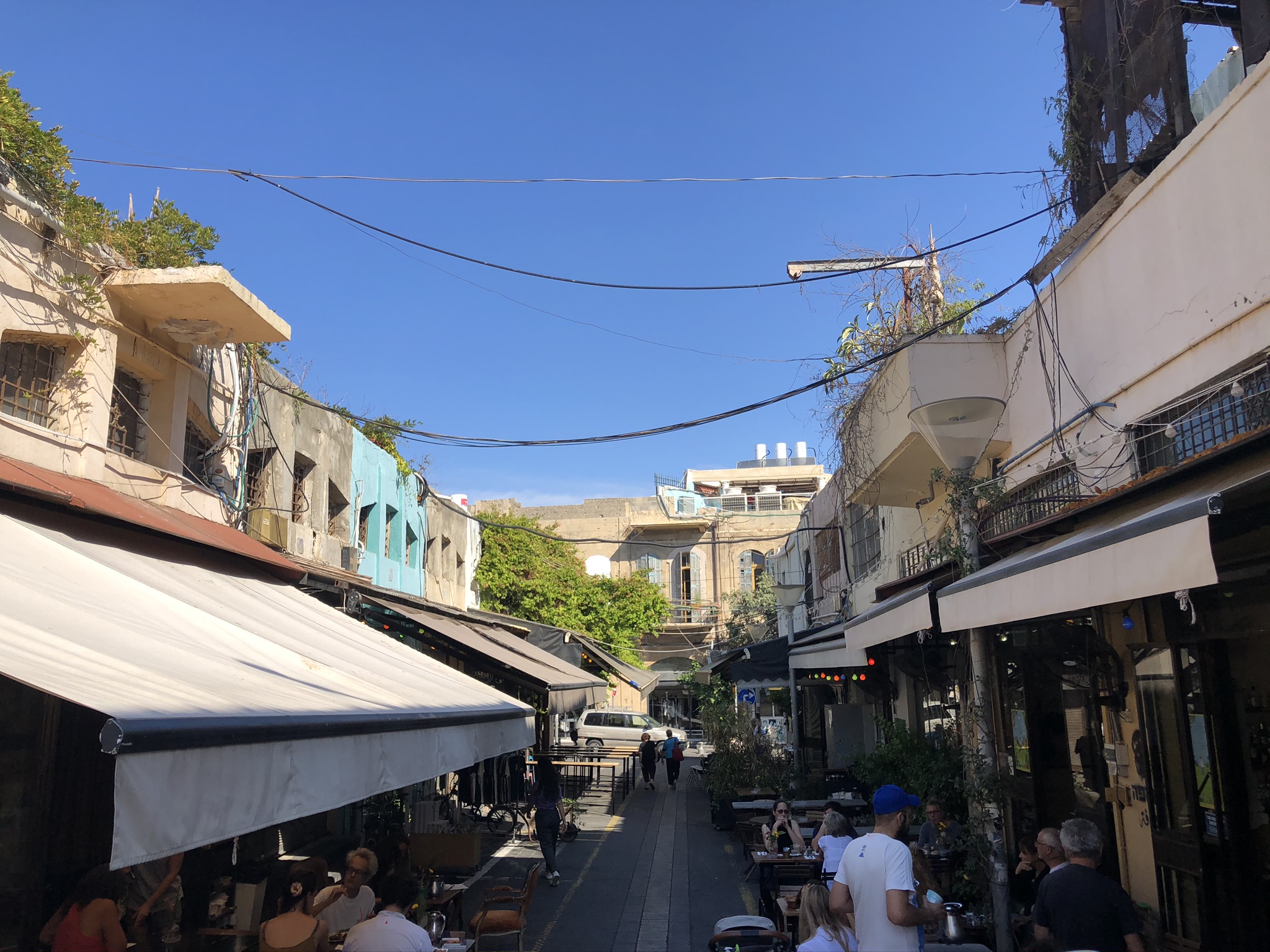 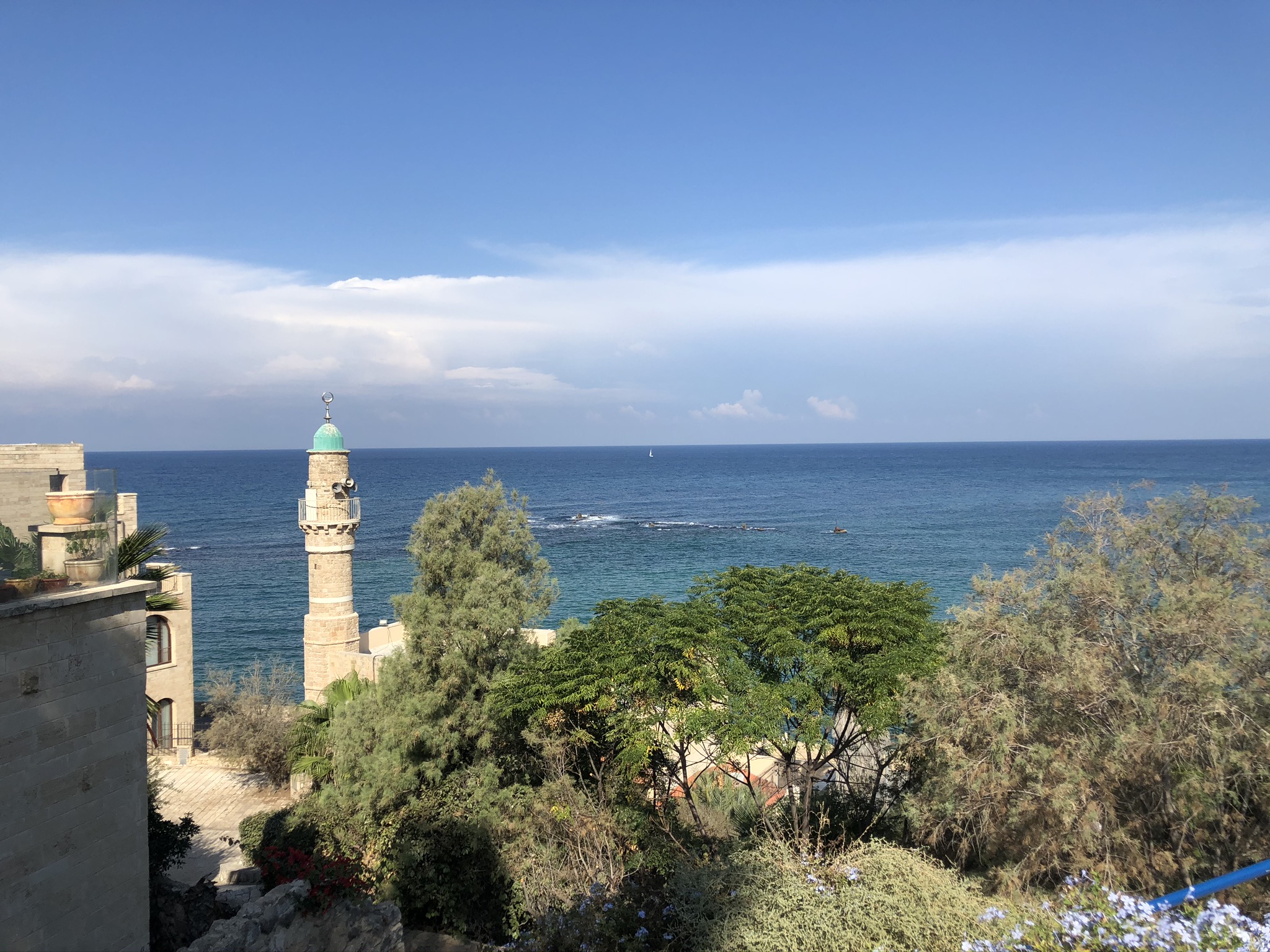 It’s amazing how different Jerusalem and Tel Aviv are. Whilst Tel Aviv is fairly secular, in Jerusalem it is obviously the total opposite. It is, again, a beautiful city, although we were all delighted to see a Halloween inspired rave party happening within the ancient Tower of David:

Since we were staying the Friday night, we enjoyed a beautiful rooftop Shabbat dinner. It was a beautiful way to round off the trip and enjoy the local traditions. 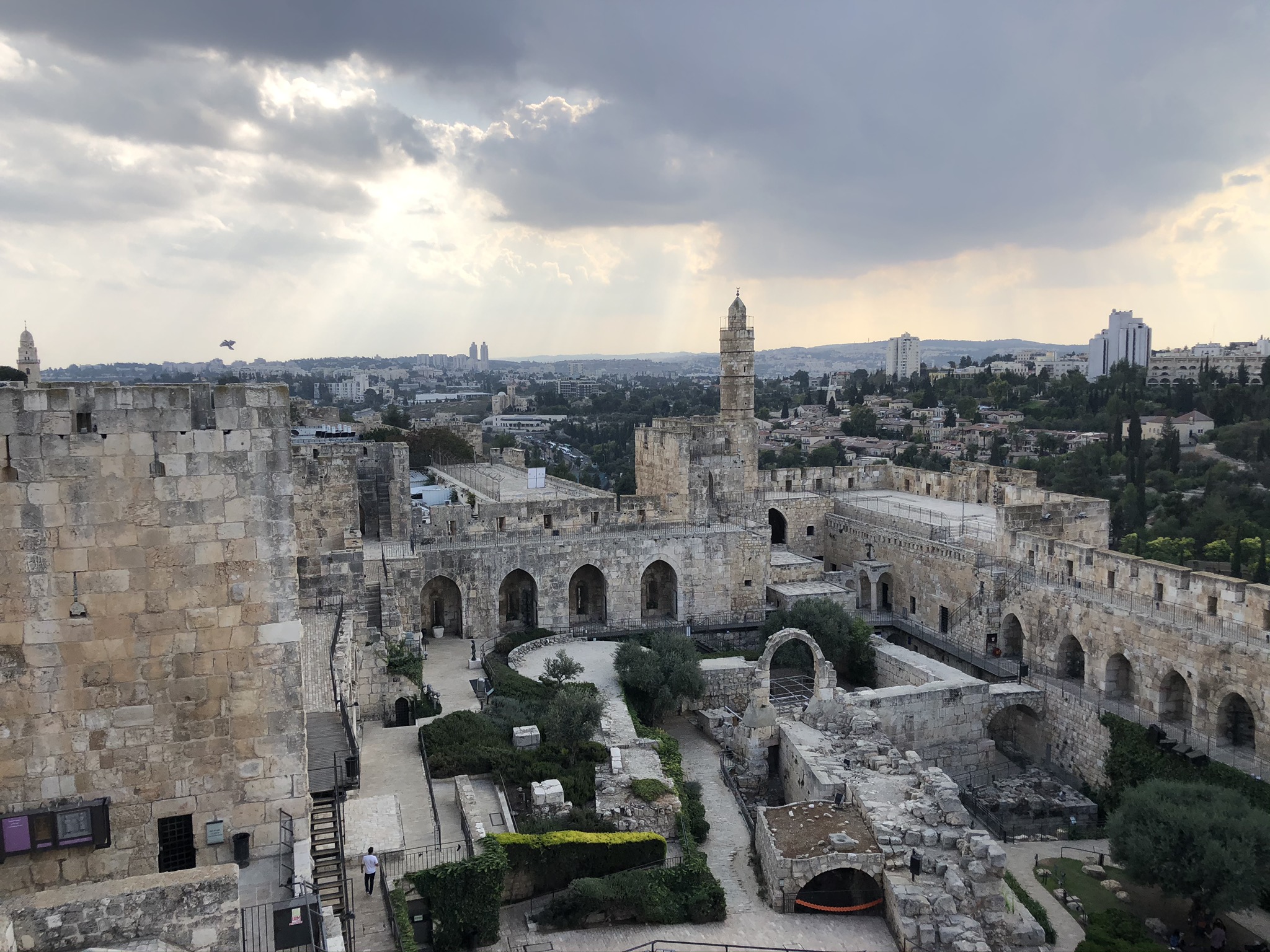 If you are thinking of taking a trip to Israel I can only recommend it. It has a vibrant culture that is well worth experiencing.  And, of course, Virgin Atlantic would be delighted if you joined them on their new daily service.

Thank you to the Virgin Atlantic team for inviting us.